I’m Gonna Pray for You So Hard, at the Unicorn: an actors’ showcase that ultimately plays too safe 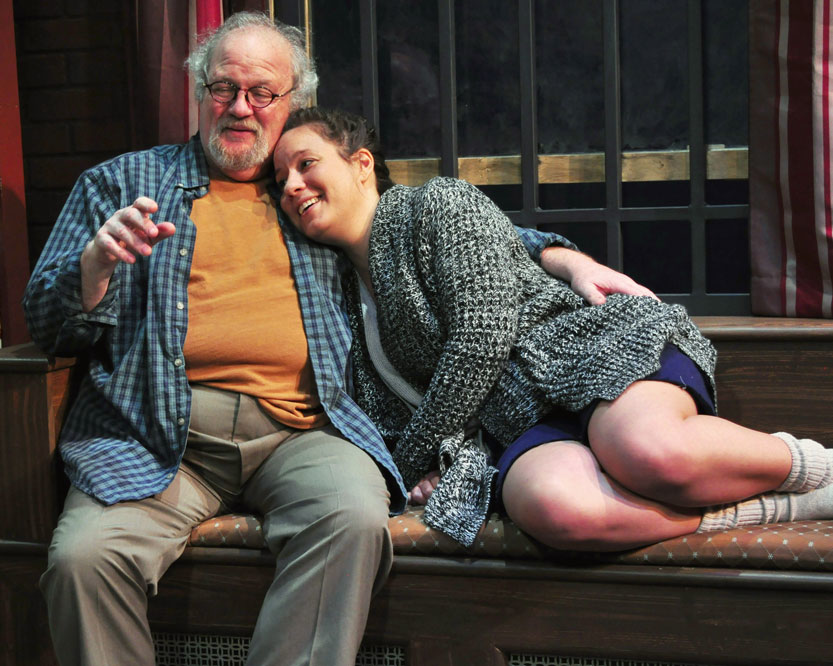 If you’ve ever been on the receiving end of a bad review, you can take comfort in I’m Gonna Pray for You So Hard, playwright Halley Feiffer’s 90-minute redressing of stuffy critics and safe bets.

The show (playing now at the Unicorn Theatre) opens as David, a crusty, Pulitzer-prize–winning playwright, is midway through a screed excoriating critics — that “sick cadre of pathetic, sniveling, tiny men with micropenises and no imaginations” (italics Feiffer’s). He’s ostensibly trying to reassure his daughter, Ella, an actress falling to pieces waiting for her first Off Broadway review (she’s Masha in an avant-garde production of The Seagull). But the abuse is just as therapeutic for David, who has struggled to get eyes on his new work-in-progress.

That dynamic — self-interest masquerading as love — sets like concrete as the play rolls on. David spends the first act working through a magnum of white wine as he relives his glory days as a budding young writer. Ella barely gets a word in over the course of the 45-minute scene. Her job is to play the studio audience, supplying all the right gasps, squeals and giggles for her father’s trip down memory lane. She mostly passes muster. She hangs sycophantically on his every line, and he doles out enough scraps of affection to sate her. But whenever she interrupts him — once to supply the ending to his favorite story — David flies into a violent rage.

Director Jeff Church keeps the talky first act taut, creating an external sense of momentum by trotting his actors through every corner of their cramped eat-in kitchen. Scenic designer Sarah White deserves extra credit for her realistic rendering of their Upper West Side apartment, replete with unexpected angles to force more interesting blocking.

But actor Theodore Swetz does most of the heavy lifting. As David, Swetz pulses with polarized currents of ego and impotence. Tender moments curdle quickly into toxic abuse, and he steers ably through tire-screeching emotional turns that match David’s vices. He takes a bong rip as he navigates one memory, snorts a line of coke to fuel the next. Though the gruff monologuing can grow tedious, David undeniably lives by his own creed: “Be transgressive. Be upsetting. Be bewildering. But above all — above all else? Do not be safe.”

Although Ella has few lines in the first act, actor Dina Thomas has arguably the more difficult role: making a slew of fawning quips and pathetic whimpers engaging. Thomas succeeds. Her performance is discomfiting in the extreme: She blooms and wilts with alarming vulnerability, frantically blowing bubblegum-scented smoke from a vape pen in lieu of a defense mechanism.

But both actors are even stronger in the second act, thanks in part to clarified objectives. Now five years older and the star of her own one-woman show, Ella demonstrates that she has stepped out of her father’s shadow — and into his shoes. Primed for reconciliation after a stroke, David sings an apology to the tune of “Somewhere” from West Side Story. It’s a hair-raising moment, almost manipulative in its splashy theatricality, but Swetz doesn’t milk it, and Thomas expertly evokes the animal hunger that brashness and bluster mask. Lighting designer Art Kent supplies much of the subtext, using illuminated catwalks and a ghost light to throw long, industrial shadows over David’s dove-white suit and Ella’s disco-ball dress.

With David and Ella, Feiffer has written the kind of roles that every actor longs to play: 90 minute floor routines of unbridled acrimony and drug-fueled immolation. Her dialogue is frequently dazzling, natural-sounding even when it drags. But the first act feels overstuffed with meandering anecdotes that strike the same dramatic chord. One point Feiffer (herself an actress) returns to several times is that brilliant performers die in review parentheticals — think “Ella (Dina Thomas)” — while showy scenery chewers earn paragraphs of frothing praise. It’s sharp meta-commentary, but a little too inside-baseball to sustain a scene.

A bigger problem is that, for all the script’s praise of transgression, the plot is relatively staid. Artists struggle with ego and substance abuse. Hurt people hurt people. Redemption, when it comes, is couched in parfait layers of irony and ugliness.

Nothing’s safer in contemporary theater than cynicism and self-destruction. But like the come-down from a coke binge, the shine eventually wears off.

I’m Gonna Pray for You So Hard