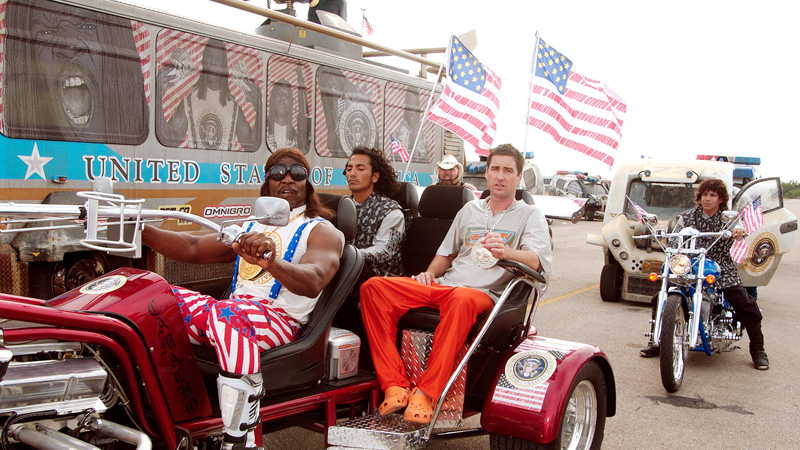 Thursday 9.29
In the midst of an apocalyptic energy crisis, an estranged couple wakes up in bed together and is immediately kidnapped by men in gas masks. When one of them is later killed, the day starts over. The new low-budget sci-fi flick ARQ puts a claustrophobic spin on time-looping movies like Groundhog Day and Edge of Tomorrow. Sure, it feels familiar, but the script, from writer-director Tony Elliott (who writes for the BBC’s Orphan Black), moves at a fast clip and has enough surprises to move beyond sheer novelty. ARQ is a Netflix original movie and is streaming now.

Friday 9.30
It was a quite a coup when Amazon announced that Woody Allen would be writing and directing his first original TV series ever for it. Since then, the embattled and prolific auteur has made his frustration with the process public. Crisis in Six Scenes is set in the late 1960s and stars Allen and Elaine May as a married couple struggling to keep up with the social upheaval of the era. Co-starring Miley Cyrus and John Magaro, it begins streaming today on Amazon Prime, so you can judge for yourself whether the fuss is justified.

Saturday 9.1
Saturday Night Live returns for its 42nd season on NBC tonight with Margot Robbie (Suicide Squad) hosting and music guest the Weeknd. SNL writer Mikey Day moves into the cast, along with newcomers Alex Moffat and Melissa Villaseñor, while cast members Taran Killam, Jay Pharaoh and Jon Rudnitsky are gone. SNL still specializes in a mix of broad zeitgeist humor and hit-or-miss political jabs, but in the past two years I’ve been encouraged by a decidedly weirder streak in the show’s writing, so I’m holding out hope for more of that.

Sunday 9.2
In 2015, the splatter comedy Ash vs. Evil Dead lived up to years of speculation and hype, and tonight the show begins its second season on Starz. So why is its return being overshadowed by a new HBO series that also premieres tonight? The answer is simple: years of speculation and hype. The long-awaited (and incredibly expensive) series is a long-form adaptation of Michael Crichton’s 1973 movie, Westworld. The original, about a robot-filled Old West theme park for adults, had some chilling moments but was mostly a lot of wasted potential. The critical roar for the series, from J.J. Abrams and Jonathan Nolan, has been pretty deafening.

Monday 9.3
Three years ago, Sam Suchmann and Mattie Zufelt started brainstorming for a movie in which they would have bionic powers and fight zombies. One successful Kickstarter campaign and almost $70,000 later, the Rhode Island-based best friends, who met at the Special Olympics when they were in grade school, have completed their opus, Spring Break Zombie Massacre. The movie, which has made Sam and Mattie unlikely media darlings, shows tonight only at the Screenland Armour, with screenings at 7 and 8:30 p.m. and both filmmakers in attendance.

Who would have thought that, 10 years after Mike Judge’s Idiocracy was released, a vapid reality TV star would be running for president and bragging about his big schlong during a debate? Following tonight’s 10th-anniversary screening at the Alamo Drafthouse, members of the cast and crew will celebrate this sadly prescient satire about a futuristic idiot America, with a Q&A in Santa Monica, live-streamed into the theater. Get an exclusive Mondo Idiocracy T-shirt (part of the proceeds go to the local League of Women Voters chapter) and put your rage to use tonight with a full dose of insanity from President Dwayne Elizondo Mountain Dew Herbert Camacho!

Wednesday 9.5
Mel Brooks’ triumphant Young Frankenstein was the pinnacle of Gene Wilder’s career. In addition to co-writing the 1974 movie — a pitch-perfect tribute-slash-parody of classic Universal monster movies — he also turns in his most nuanced and hilarious performance. See it in all its glorious black-and-white splendor (featuring props and sets from the original James Whale Frankenstein movies) on the big screen at this one-night-only Fathom Events screening. It’s showing in at least four Kansas city-area theaters; check fathomevents.com for details.