How Kansas City learned to stop worrying and love Da’Bomb 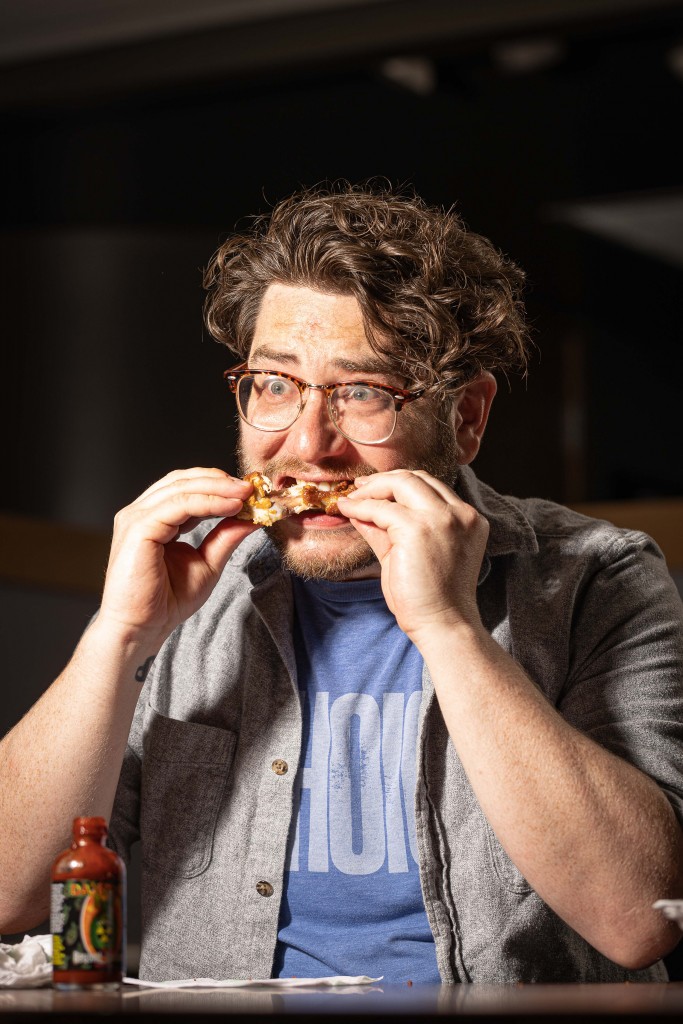 If you’ve never seen Hot Ones—the hit YouTube series from First We Feast in which celebrities are interviewed eating hot wings—allow me to suggest an entry point: Paul Rudd.

In the viral 2019 episode, Kansas City’s prodigal son suffers through a series of increasingly hot sauces with Midwest stoicism. The producers have placed a pint of milk at his side; he doesn’t touch it. He jokes with the host and plays around with his phone camera, never losing his Golden Retriever grin.

Until that is, he gets to Da’Bomb Beyond Insanity—an intentionally punishing hot sauce manufactured in Kansas City, KS. Rudd and host Sean Evans each pop a sauce-coated cauliflower “wing” into their mouth. They stop smiling. They start choking.

“We also have Patrick Mahomes,” Rudd whispers through a mask of pain. “Don’t judge us on just that.”

Da’Bomb is the deviant brainchild of Spicin Foods, née Original Juan Specialty Foods, a small-batch condiment manufacturer that’s operated out of a 60,000 square-foot warehouse off Southwest Boulevard for almost 20 years.

In 2018, the company was sold to Florida entrepreneur Scott Morse; an ongoing legal dispute with the former owners suggests the building needed some work. Spicin kept going. They bottled sauces for well-known local and national businesses, from Joe’s Kansas City to Jones Bar-B-Q to Williams Sonoma. But they also poured more resources into growing their own brands—Pain Is Good, American Stockyard, and Da’Bomb.

This May, Spicin filled their millionth bottle of Da’Bomb, thanks in large part to the Hot Ones bump. Da’Bomb has been a part of the show’s line-up for 13 seasons, the only sauce with that distinction. 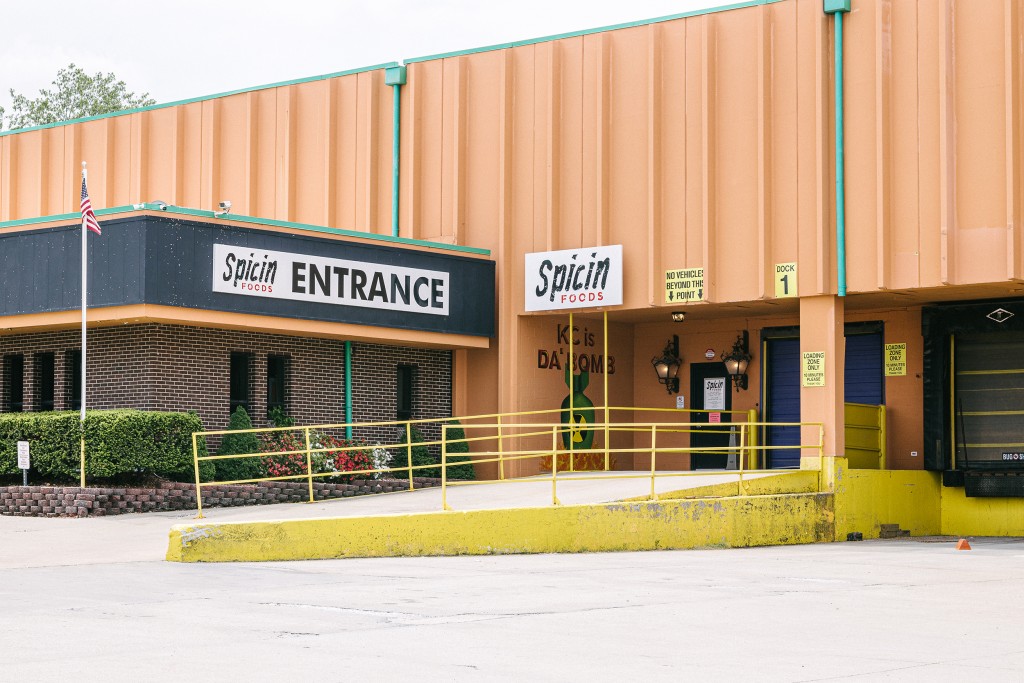 For Chris Schonberger, creator of Hot Ones and general manager of First We Feast, that inclusion was a no-brainer. He says the show’s primary focus is the interviews, a goal that transcends the gimmick. “But there’s still a certain bloodlust among the fans—they want to see a real reaction, and Da’Bomb almost always delivers.”

There’s a reason it gets that reaction. The sauce clocks in at 135,600 Scoville Heat Units (for reference: a jalapeño ranges between 2,500 and 8,000). Da’Bomb is a sauce that earns its roguish, mocking apostrophe. It smells like a habanero massacre and tastes like a goblin’s ashtray. I sampled it on my way to Spicin Foods for a tour: a drop the size of a pencil eraser was enough to inflame every mucous membrane in my body. After three drops, my skin bristled like an angry hedgehog. The experience was anatomically fascinating; I hope to never repeat it.

Spicin’s chief operating officer, Jeff Hinds, is a businessman, so I expect him to lie to me—to tell me Da’Bomb gets a bad rap, that it’s a versatile sauce with redeemable qualities. Instead, he gives me a medical history.

“It’s just an overbearing heat,” he says. “Bloodshot eyes are normal. Watering eyes are normal. Ringing ears are normal. Your neck and chest and head start turning red. Sweating. Hiccups. And then pray you don’t burp, because it comes back up for a second shot.” 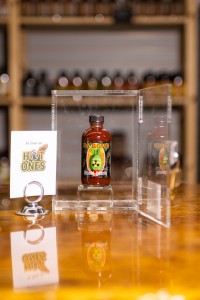 The prized bottle of Da’ Bomb.// Photo by Zach Bauman

Schonberger describes the sauce in similar terms. He tastes Da’Bomb before every season of Hot Ones but hasn’t unlocked any new tasting notes. “Da’Bomb isn’t about nuance, and that’s kind of why it works. It’s just a stick-your-tongue-in-an-electrical-socket type of experience. In the novelty hot sauce category, it is king.”

Where Hinds and Schonberger disagree is the sauce’s culinary utility.

Hinds: “The whole intent of that was to heat up, like, a pot of chili or something. It never was designed or intended to go on a wing.”

Schonberger: “Cooking with Da’Bomb isn’t something I’d necessarily recommend, unless you are serving a revenge dish to someone who has wronged you.”

How do you make a sauce this flatly painful? Da’Bomb has a habanero and chipotle pepper base, but the heat gets a boost from hot pepper extract—pure, uncut capsaicin without any pesky flavors to get in the way. That’s partly why Da’Bomb tastes much “hotter” than other sauces with a similar rank on the Scoville scale: the oily extract coats your tongue and sticks around. With Da’ Bomb, it’s not the initial blast that kills you—it’s the aftershock.

Hot sauce fanatics tend to look down on extract sauces—the conventional view is that they’re prank sauces, taking shortcuts that shortchange flavor. But that doesn’t seem to have put a dent in Da’Bomb’s sales.

“It’s our number one seller,” says Mark Romero, business development executive for Spicin Foods. “Hands down. Depending on who’s on Hot Ones week after week, that’ll drive how many sales we have.”

If Da’Bomb is a prank sauce, that prank helped get a business through the pandemic. Like most manufacturers, Spicin Foods faced supply chain disruptions in 2020. Plastic resin costs increased, glass bottle costs increased, aluminum costs increased. Demand for some of their products tanked at the same time. 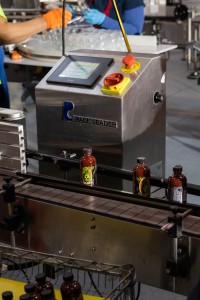 Hinds and Romero estimate that before the pandemic, about half of their business was in gallon jug sales to restaurants. When restaurants shut down, that business evaporated. The company refocused on online and retail sales and looked for other ways to collaborate with restaurants. When Gojo’s Japanese Steakhouse closed, Spicin worked to bottle and sell the restaurant’s beloved “yellow sauce” directly to consumers.

Hot Ones has been a lifeline—Romero says they owe the show a “debt of gratitude” for all the free publicity they’ve received over the years (Spicin Foods has never paid to be featured on the show). And things are a little more stable, now. The day I visited the factory, three restaurateurs from out of state were in Spicin’s test kitchen, tasting commercially scaled versions of their restaurant sauces and giving the chefs notes.

The chefs on Spicin’s R&D team—AJ Smith, Tommy Carter, and Edwin Fluevog—churn out hundreds of test batches a year in the quest for the next big sauce. Hinds calls them “the three-headed dragon.” If you’ve ever wandered the Spicin Foods gift shop and picked up a $0.99 test kitchen sauce—these are the guys who make it.

When I ask to see the ingredients they have to work with, Smith immediately sets about opening cabinets and pulling out drawers. The team has just about any spice or acid or powder they might need, and a few they probably won’t. In one drawer, there’s a small cylindrical tin that looks like it should contain breath mints but that actually contains dead scorpions. 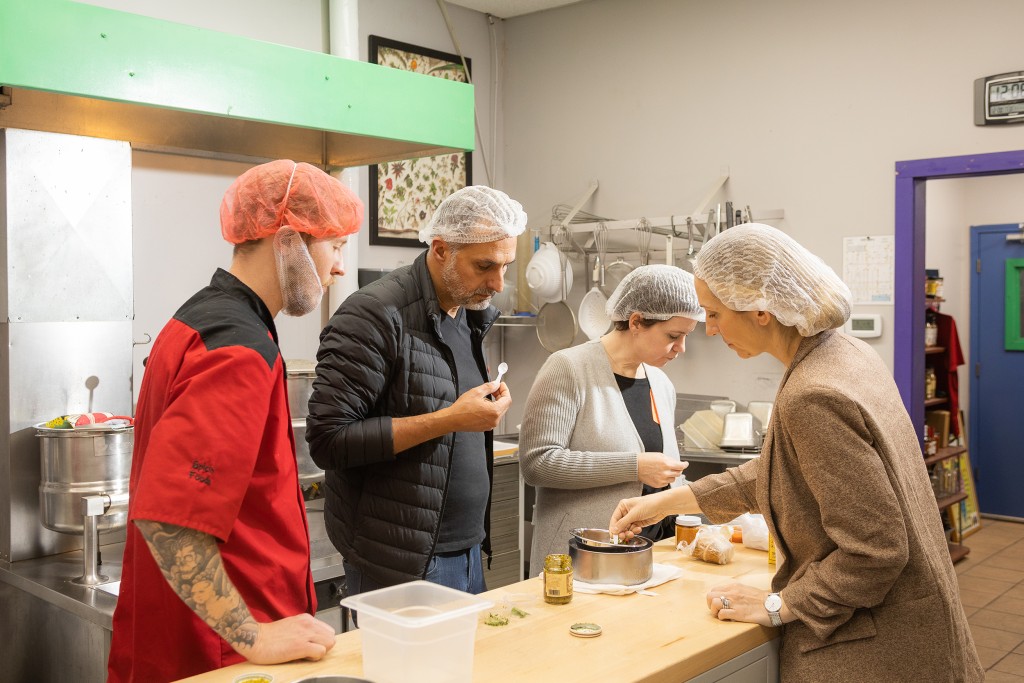 If “hot sauce inventor” sounds like a dream job, consider that these guys also have to taste test each batch of hot sauce against an archived sample for quality control—including Da’Bomb. The three rotate the duty, but Smith estimates they all have to taste Da’Bomb at least once a month. When I ask him what flavors he’s tasting for, he seems surprised by the question.

The resistance never really builds up. Smith says his palate is always wrecked for at least 15 minutes after a taste. “When people eat really hot stuff, they’ll usually have one thing that goes—for me, I start to sweat under my eyes.”

“My back cramps up on both sides of my spine,” Carter chimes in.

This isn’t pain theater. Nearly every Spicin employee I talk to mentions the same thing about Da’Bomb bottling days at the factory—chiefly, that you always know when it’s Da’Bomb day. The habanero mash is ambient. Think mace as a dorm-room incense.

The hot sauce business comes with a host of unique occupational hazards. When Spicin Foods bought the plant from Original Juan’s, they had to repair the flooring—the acids from the sauces had eaten through the epoxy. Some ingredients have enough capsaicin to burn skin. Hinds says on Da’Bomb days, workers wear goggles, masks, gloves, and face shields (one plant worker I spoke to confirmed this).

“I tell a lot of people, this is the one place in the world where you want to wash your hands before you go to the bathroom,” Hinds says. 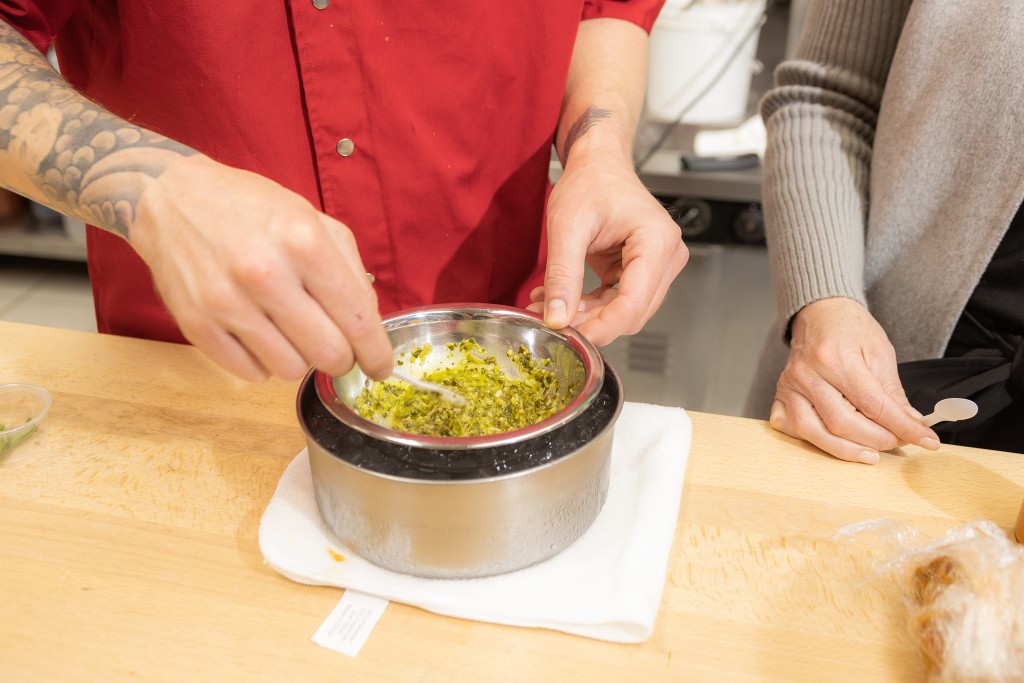 The Hot Ones bump means workers are going to be smelling (tasting, breathing) Da’Bomb for a while. Each episode inspires a new crop of victims eager to be poisoned. But Spicin Foods has other tricks up their sleeve. This year, they signed a multi-year deal with the Kansas City Chiefs to produce branded barbecue and hot sauces. They continue to co-pack sauces for major retailers and celebrity clients (“we’re working with one guy named Dave,” Hinds says. “He’s pretty Famous.”) They’ve got a destination gift shop where heatheads can buy cheap test kitchen sauces—the treasures of the three-headed dragon.

They do a lot more than just make one of the best worst hot sauces in the country. But Da’Bomb casts a big shadow, and for now, the folks at Spicin are happy to walk in its pungent shade.

You could say the same thing about Hot Ones.

“Sometimes, I feel like the mythology of Da’Bomb is bigger than the show itself,” says Schonberger. “It’s bigger than any of us. Long live Da’Bomb.”

As part of this story, we at The Pitch office had a Da’ Bomb tasting party. We each individually burned our mouths and our bodies to experience the taste of pain. Here is a gallery of photos from that tasting.  All photos by Zach Bauman.