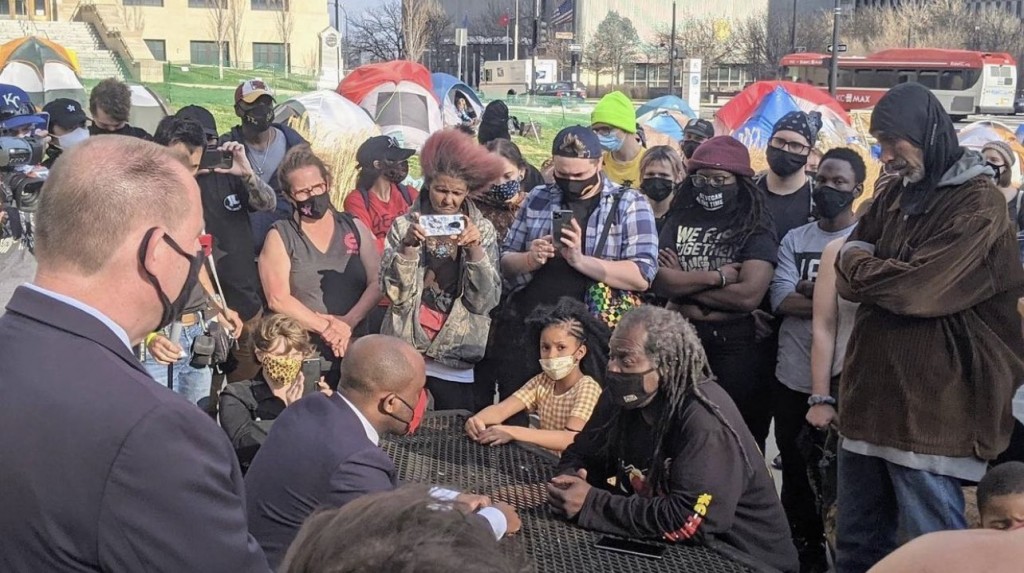 Mayor Lucas meeting with Qadhafi and others in KCHU.// Courtesy of Mayor Lucas

After two months of occupation and protest outside City Hall, Kansas City Homeless Union and Mayor Lucas came to an agreement yesterday.

The agreement came after a tense week in the city that began with the threat of sweeps at the City Homeless Union occupation at City Hall and Camp 6ixx in Westport. When the camps were given notice to vacate their location or face arrest, KC Tenants and KC Homeless Union gathered at both the encampments to prevent the sweeps and stand in solidarity with the unhoused people there. Instead of the threatened sweeps, the city conducted trash removal and promised to do so twice a week going forward.

After the momentous weekend, Mayor Lucas and Councilwoman Parks-Shaw met with representatives from Kansas City Homeless Union multiple times throughout the week. On April 8, they held a joint press conference to announce the plans that they made.

Proud of the process and consensus we have built with the @kchomelessunion . We’ve agreed to following: (1) safe and warm relocation opportunities at area hotels for all; (2) an RFP issuance for preference on vacant homes and land bank homes for those earning below 30% to 0% AMI;

“The city heard us and responded, and we’re grateful for that,” Qadhafi, a leader with KC Homeless Union, said at the conference. “That’s not the end. That’s a first step of the beginning of resolving this issue, of eradicating it.”

Parks-Shaw and Lucas introduced a short-term solution to the council that would expand and extend hotel rooms for unhoused people. No ID is required to stay in the rooms, and the city is making up to 500 hotel rooms available for at least the next 90 days with an option for extension.

The proposal was unanimously passed by the city council April 8. The union is working to confirm that the hotel addresses will be available for people to use as their proof of address when securing documents needed to gain identification and employment. Lucas is also working with the council and Neighborhood groups to set up an outside option for those who do not wish to stay in hotels to still have access to the programs and amenities of the hotel rooms.

The council also told the city manager to create a stop-gap plan for offering housing to those experiencing homelessness, with the intention of finding federal tax dollars to cover the bill.

“I am proud of the progress we have made with the KC Homeless Union and Kansas Citians experiencing houselessness over the past many days and am pleased to announce today—with input from the KC Homeless Union—several measures to increase housing availability and affordability throughout our community,” said Mayor Lucas in a statement. “While our work is far from done, these are important steps that will create safe short- and long-term housing solutions for those currently on City Hall grounds and beyond. We will continue working to provide wrap-around services including replacement IDs and birth certificates, jobs training, mental health counseling, and more.”

Lucas and Parks-Shaw also introduced two other long-term solutions to the council based on their conversations wiht KC Homeless Union.

The first is a resolution to amend the City’s Land Bank program. The amended program will prioritize unhoused people’s access to the Land Bank homes by guaranteeing long-term affordability at 30% Average Median Income or below. That would make monthly rent around $400 or less for at least 20 years. The amendment will also include a ban on source of income discrimination, allowing people on disability or with vouchers to access the homes.

Parks-Shaw is working to expand the program to a Community Land Trust, which would include more homes, ensure permanent affordability, and combat corporate speculation and gentrification.

The second long-term solution Lucas and Parks-Shaw introduced would launch a study to determine systemic impediments to employment based on lack of housing, identification, access to transportation, gaps in employment history, and more. The study will allow the city to identify barriers to employment. Based on the results, they will develop a plan to provide fair-paying, long-term jobs to unhoused people.

Throughout the week, Reconciliation Services came to the City Hall encampment to help the unhoused secure IDs and birth certificates.

Some of the unhoused community has already taken advantage of the hotel services.

“When the city moves in our favor, there’s no need to continue to occupy if we get what we want,” Quadafi said. “Every ask that we asked, it appears that the city and the mayor is working with us and heading down those roads.”

Others in the houseless community resisted the joint effort to create first step short-term and long-term approaches. Members of Camp 6ixx said the agreements made did not represent their interests and were not extended to them.

“[The measures do] not just apply to this encampment, [they apply] throughout the city,” said Mayor Lucas at the press conference.

The KC Homeless Union recognized that the measures produced this week will not end homelessness in the city. The group plans to continue organizing for an equitable end to homelessness and for safe, accessible, and affordable homes for everyone in Kansas City.