Hogshead’s ode to McDonald’s iconic McRib started as a joke. Now the restaurant is selling 300 a week. 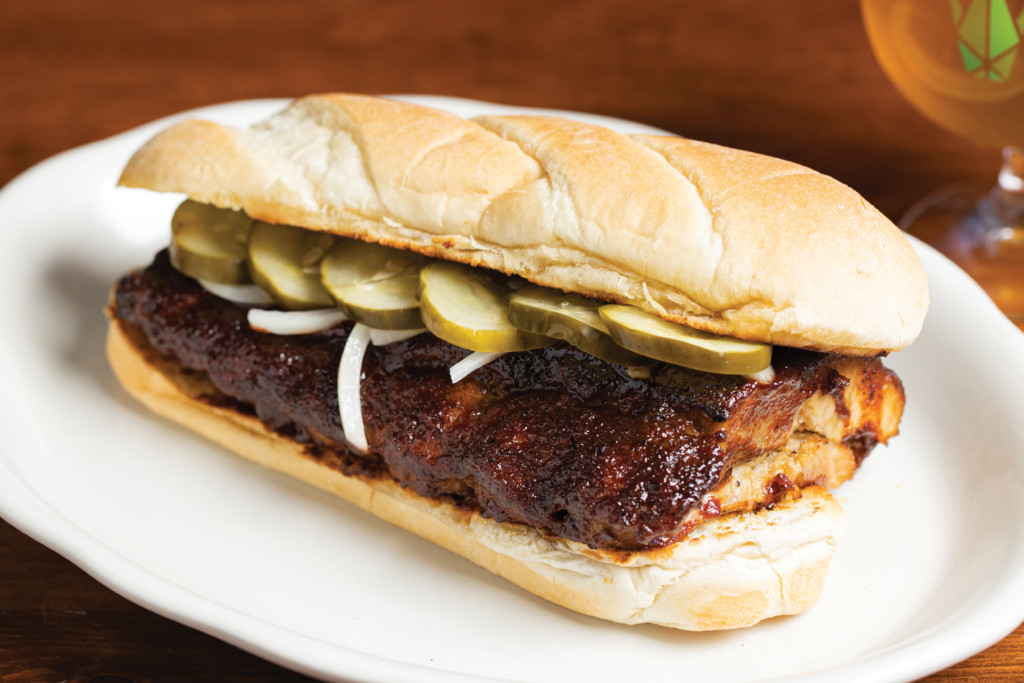 I grew up in a small town without many restaurants and learned to time my appetite with the change of seasons. I’m talking about McRib season, of course—that chimerical time of year when the lighted sign beneath the fool’s-gold arches blared a saucy promise: MCRIB IS BACK. Actually, now that I’m thinking of it, the sign probably said something like M R  S  ACK. Letters were always falling off that thing.

Oh, how I longed to see Mr. Sack. The McRib is an unparalleled feat of engineering, a particle-board paste of mechanically separated pig molded into a rib-shaped patty and drowned in barbecue sauce like a rat in a bucket. To my youthful imagination, that sponge-y patty felt more real than a rack of ribs, much like Disney World felt more real than the adult world with all its inconvenient nuance.

I have since put away childish things. Now, I drive to Hogshead on the Plaza, where chef-owner Clark Grant has crafted something much better and much less pronounceable: the mKCrib.

The fast-food-inspired sandwich started as a joke. After a charity cook off, Grant wound up with three cases of ribs in his cooler and thought an upgraded McRib would be a goofy way to use them. The first day, he prepped enough ribs for 15 sandwiches. “We sold out of them by six o’ clock,” he says.

Now, the mKCrib is a permanent menu item. You can order it any time of day, though it’s not yet officially listed on the brunch menu. On a good week, Grant estimates he might sell 300.

Hogshead’s answer to the McRib is a craftsman’s answer to IKEA furniture. Grant cold-smokes a half-rack of ribs for each sandwich, then braises them in pork broth until the meat is so tender, he can slide the rib bones out like a magician removing a tablecloth without disturbing the plates. The meat is swaddled but not swimming in a glossy, well-balanced sauce of Grant’s invention (you can buy a bottle for $9). The lightly toasted, buttery hoagie is pliable but firm enough to withstand the sauce. I made it through half of the sandwich before I needed to reach for a napkin.

Even the toppings are an upgrade. Although the mKCrib, like its prototype, keeps it simple—just curls of raw white onion and slices of pickle layered like shingles—the latter are Kansas City Canning Co.’s Unfiltered Hoppy pickles. The slices are thicker and snappier, with a subtle sweetness and a fresh vinegar twang.

The sandwich, it must be acknowledged, is pricy—$18 with a side—but it’s also enormous and easily feeds two. On Hogshead’s Facebook page, you can watch them drop their version on top of the original to the tune of “The Final Countdown.” It flattens the McDonalds sandwich like an Acme-branded anvil, like a boxer punching three weight classes down. The top of the Hogshead hoagie bounces in slow motion, landing at a lewd, rakish angle. You feel like you should look away.

During the Plaza Art Fair, Hogshead offered a cheaper, quarter-rack version of the sandwich, which I tried and preferred. It looks closer to the OG Rib, and it’s a better size for one. Grant tells me he’s contemplating adding that size to the restaurant’s fall menu, noting most of his guests aren’t finishing the half-rack version.

For now, order the full size and split it with a friend. As I write this, I’m being inundated with advertisements for the resurrected McDonalds’ sandwich. Yes, the McRib is back, but it’s back like a bad ex-boyfriend, sliding into your DMs (and down your gullet) with oily overconfidence. The mKCrib never left, baby. It’s sturdy. It’s dependable. It doesn’t taste like a malnourished piglet was lured into an alcove by a vengeful amontillado dealer, packed in with papier mâché, and left to die. You’re older and wiser now. You know the right mKChoice.