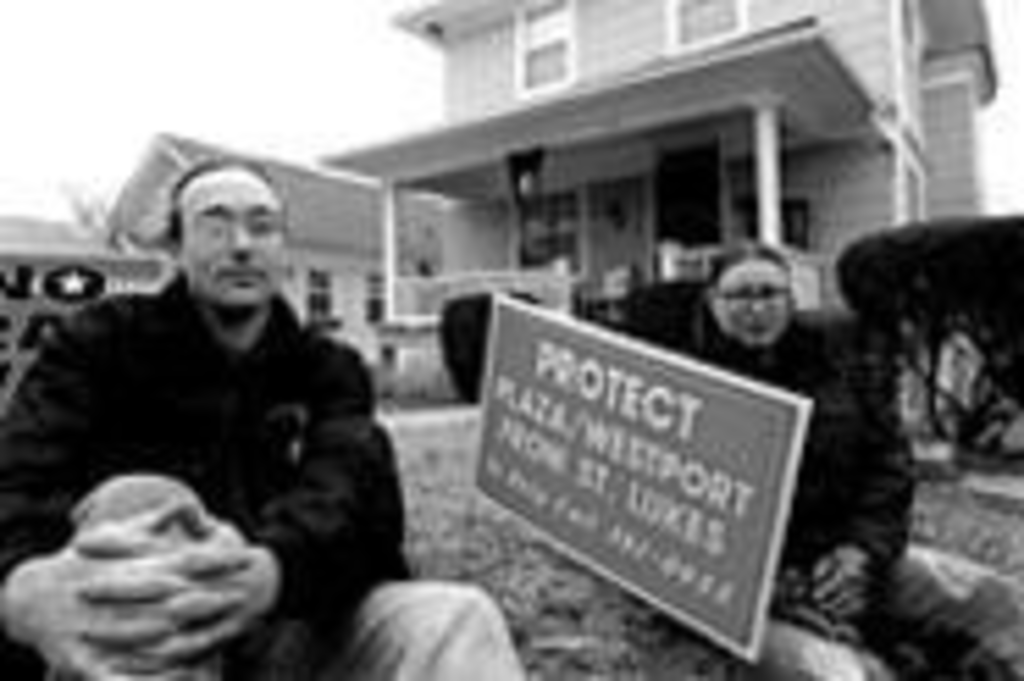 For years, homeowners just up the hill from the Plaza have been afraid of developers.

Now they’re starting to bicker among themselves. At issue is how to stop being squeezed by construction in the neighborhood north of Barnes & Noble.

Homeowners haven’t controlled most of the land in their neighborhood for years — they’re in the minority, packed together Monopoly-style between rental homes and apartments. Along 45th Street, scattered rental houses with ripped porch screens, overgrown lawns or discarded couches stand beside clean, freshly painted two-story homes. Above one entryway, a resident has nailed a large neon-orange trout.

Norine O’Brien has lived just off of 45th Street since she was born. She’s happy when it snows, she says. It helps cover other properties’ filth.

When O’Brien’s parents died, she rented out their house. Now she owns three houses and rents out two. She bought the houses to stave off development. “I did it primarily because J.C. Nichols was buying up lots of property in the area,” she says. “It was one less that he could control.”

In December 1998, the St. Luke’s Hospital Foundation inherited 111 rental properties from the Miller-Nichols Charitable Trust. The transaction gave the hospital almost half the land in the area. Despite “significant reluctance” to enter into the landlord business, St. Luke’s accepted the donation, says Nancy Seelen, vice-president of public affairs for St. Luke’s. She says the hospital wanted to make sure the neighborhood remained safe and attractive for its patients. The foundation named its subsidiary property-management company Westport Today.

In what would be its first sale to a commercial developer, Westport Today wants to sell most of the 4400 block of Madison to the Denver-based Greystar, which has initiated three other projects in the area: a 26-unit townhouse proposal under contract at 4600 Madison, an 18-unit townhouse proposal at 4600 Washington, and a 51-unit condo conversion at 4949 Wornall Road.

Greystar has dubbed the 45th and Madison project “The Metropolitan.”

Helen Foster, who teaches at a preschool in the area, has owned land on the corner of 45th and Madison since 1960. Buildings have gone up in her neighborhood “faster than an outhouse in Raytown,” Foster says.

If The Metropolitan is approved, Foster’s four-house string of preschool and rental properties will be bordered by two big boxes of apartments. Her main concern is the traffic. Madison Avenue is already a drag strip for morning commuters coming north off Ward Parkway and headed toward Westport or downtown. She claims to be able to tell by the sound of the crash whether a car accident is a flip, a fender bender or a fatality.

To build The Metropolitan, Greystar would spend $15 million on a four-story, wood-framed townhouse complex on what is now an abandoned grass lot that neighbors have filled with wrought-iron benches, a bird feeder and a concrete birdbath to create a makeshift park. A brick house and an office duplex, both of which now have tenants, would be torn down.

“It’ll be a bunch of warehouse strangers, a bunch of transients not buying into the property the way owner-occupants would,” says Nathan Kline, who lives at the corner of 44th Terrace and Summit. Twice in the past ten years, Kline has had to move out of midtown rental houses. So when he and his wife bought their bungalow in 1994, he was excited. From his front porch, he could watch the stars.

Now that view might be eclipsed. Construction on The Metropolitan is slated to begin right across the street.

In mid-January, Kline and eight of his neighbors formed the Plaza/Westport Preservation Committee to lobby for zoning changes that would limit development in the area to single-family homes. He put up a red sign on his front lawn that reads “Protect Plaza/Westport from St. Luke’s.” Similar signs stand like track hurdles on lawns throughout the block.

But many of Kline’s original 100 signs have mysteriously disappeared. And some of Kline’s neighbors are complaining — not about Greystar but about his signs. Members of the Plaza/Westport Neighborhood Association say that even though Kline is part of the association, his protest is unsanctioned.

“I don’t like signs,” says Hilda Gibbs, president of the neighborhood association.

Gibbs says the association can’t reach an acceptable compromise with St. Luke’s by taking a “to heck with them” attitude. To prevent out-of-control development, she says, neighbors need to reason with St. Luke’s. “And these are not nice signs anyway.”

Bob Gamer, who owns a furniture store on Jefferson Street, calls Kline’s effort a “little rebel campaign [that] has been going on for quite a while.”

Officials at St. Luke’s have said they don’t want to hurt the neighborhood. “We want to see the area revitalized, residential in character, and in a way that complements the existing property and some construction,” Seelen says.

Greystar representative Jason Alhers says he has committed to working with the neighborhood association. “There is a lot of opposition to the project,” Alhers says. “That’s just the reality of an urban in-fill project.” He calls the preservation committee “a small, vocal group of people who want to see very specific things go on.”

Alhers agrees with all of the homeowners on at least one point. “We think that the Country Club Plaza … is a very desirable place for people to live,” he says.

Greystar has said it will hold Metropolitan proposal until the City Council can gauge community sentiment — but its other projects will move forward.

On January 28, Greystar broke ground for a townhouse development farther up Madison Avenue.