Gene Willis, director of marketing for the National Center for Drug Free Sport, tells The Pitch‘s Questionnaire that KC has arrived — and isn’t finished 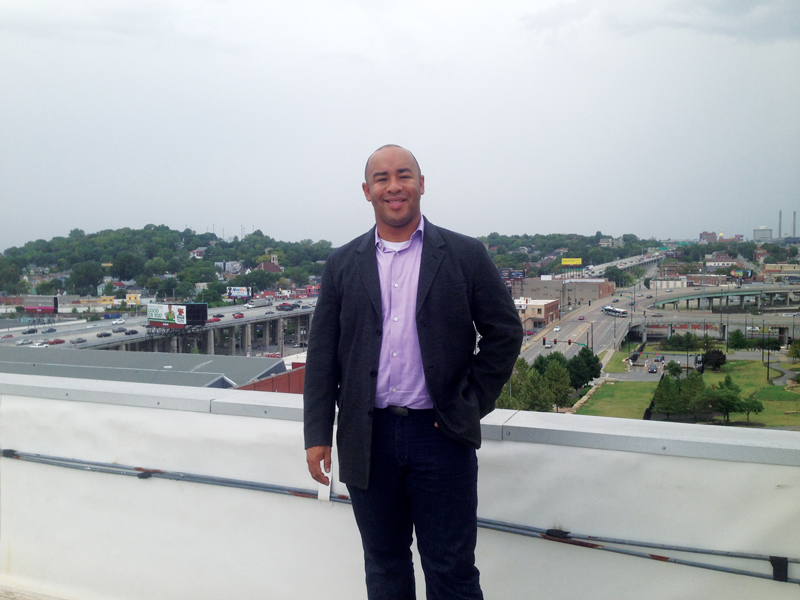 What I do (in 140 characters or less): Strategic marketing/PR, helping athletes and the “team behind the team” to make good decisions about substances of abuse and performance-enhancing drugs

What’s your addiction? Every Tuesday night on Twitter, I ask the world five questions, using the hashtag #g5qs (Gene’s Five Questions). It ranges from pop culture and entertainment to politics, social justice and “what if” questions. I’ve been doing this for more than four years, and I’m beyond flattered that people look forward to it each week.

What’s your game? So many. I have played chess since I was 7. My Words With Friends game is also quite strong.

What’s your drink? Morning: chocolate milk. Weekend nights out: Jack and Coke. Whiskey grew on me while I was going to college at the University of South Carolina.

Where’s dinner? Bo Lings, starting with the best egg-drop soup in the city

What’s on your KC postcard? A photo of Kansas City’s skyline with the Missouri River flowing below it, shot from Strawberry Hill

Finish these sentences: “Kansas City got it right when it …” Maintained free or affordable parking in most of our high-traffic and tourism areas in the city. If you’ve traveled to other cities, you understand how parking can affect your time and entertainment choices.

“Kansas City screwed up when …” We bought into the thinking that fixing and investing in our school district was someone else’s problem. We let politics and divisive thinking undermine a decade of public education in our city, to where it’s just now reaching accreditation once again. Fortunately, there are a lot of great citizen groups and volunteers helping to turn the corner, along with the work of the new superintendent. Check out the #kcgreatschools hashtag online.

“Kansas City needs …” To develop its downtown riverfront. Last month, I visited Nashville on a work trip. Their commitment to their downtown around the Cumberland River is beyond impressive: entertainment, housing, transportation, shipping and exercise and open-park options.

“As a kid, I wanted to be …” So many things. A National Weather Service meteorologist. An astronaut. I went to the University of South Carolina with the goal of being a future pro-sports general manager, then discovered that I liked the marketing and storytelling around entertainment much more.

“In five years, I’ll be …” Still committed to being an active citizen and advocate for our city. I’m in my 14th year of being a “big” for Big Brothers Big Sisters of Greater Kansas City, one of the best organizations in America. (It’s not just my opinion — they have the awards to back it up.) My wife and I also foster dogs that have been emotionally damaged or have confidence issues, for Great Plains SPCA.

“I always laugh at …” Talking animals in movies or on television. It’s silly and I can’t explain it. But think Ted or back to ALF or Salem from Sabrina, the Teenaged Witch. They bring tears to my eyes.

“I’ve been known to binge watch …” Black-ish, Friday Night Lights, Homeland, Orange Is the New Black and The Walking Dead.

“I can’t stop listening to …” British soul music. Since 2008, the Brits have been on a roll. I especially love Jessie Ware’s music and Corinne Bailey Rae’s newest album.

“My dream concert lineup is …” A performance of Kanye West’s My Beautiful Dark Twisted Fantasy, complete with all guest artists and the Kansas City Symphony, at the Kauffman Center. It’s brilliant on so many levels.

“I just read …” I re-read UMKC professor Whitney Terrell’s The King of Kings County. I think it’s something that every KC citizen should read. It’s a beautifully written historical-fiction piece that covers the story of Kansas City in the ’50s, with a particular focus on how developers like J.C. Nichols exploited racial divisiveness to their financial benefit. The remnants of those tactics are still present in our city’s layout.

What’s your hidden talent? I can typically name a popular song by hearing the first few seconds of it. It’s a gift that bears no fruit except at parties.

What’s your guiltiest pleasure? It’s not really guilty, but I’m a WWE fan. In 2015, a great friend (hey, Ryan Noonan!) and I decided on short notice to cross something off our bucket lists and went to Wrestlemania at the San Francisco 49ers stadium, with floor seats. The Money in the Bank contract was cashed in by Seth Rollins. Last big match for Daniel Bryan and AJ Lee. Plus, Sting. Like I said, not guilty, but my wife doesn’t approve.

The best advice I ever got: “The answer is always ‘no’ to the questions you never ask.” Will the girl go out with you? Will you get the job? Can you get the last piece of pizza? Not if you don’t ask. One of my best friend’s fathers gave me this advice over a college Thanksgiving break at their house. It changed my life and expectations of myself.

Worst advice? “Look where you came from. People didn’t expected much of you, so be glad you are where you are.”

My sidekick? I’ve got a few: my lovely and creative wife, Carrie; our two dogs, Gus and Daisy; our big couple “little brother” Terrion and my “not so little brother” Mario. He’s a senior at K-State, and we met when he was in fourth grade. Really proud to have them in my life.

Who is your hero? No heroes, but people who inspire me are President Barack Obama; Sen. Cory Booker; my high school history teacher and track coach, Rob Hassig; and one of my first career mentors, Clayton Reid of MMGY Global.

Who (or what) is your nemesis? Perhaps time?

What’s your greatest struggle right now? Prioritizing myself, mostly in the form of getting to the gym early in the mornings.

My favorite toy as a child: Matchbox cars.

My dating triumph/tragedy: My wife and I met in an elevator during my first week of a new job. We spoke, then didn’t speak again for another two years, until I was secretly planning a move to Chicago. I moved, went backpacking around Europe, then moved back to KC for her.

My brush with fame: I worked in film marketing for AMC Theatres for several years, so my work brought more than my share of great moments. I’ve had a dance-off with director Joss Whedon and the cast of Glee at a San Diego Comic-Con party. I’ve been six feet (not six degrees) from Kevin Bacon at a Sundance Film Festival premiere event. I once told Wesley Snipes, “I’ve been down with you since Nino Brown.”

My soapbox: Be a citizen, a part of the change that you’d like to see in this world. Get to know someone that doesn’t look like you, worship like you or is from your neighborhood.

What was the last thing you had to apologize for? More than likely, to my wife for running behind for an event or a movie.

Who’s sorry now? Oddly enough, Kansas City apologists, who didn’t think that our little “cowtown” could do the great things that it’s doing. From civic change and growing infrastructure to burgeoning events like the Kansas City FilmFest, we’ve arrived and aren’t finished.

My recent triumph: Becoming a part of the running community once again. I let injuries and my schedule become excuses for too long. I joined a great running group this past summer that continues to motivate me, even in cold months.