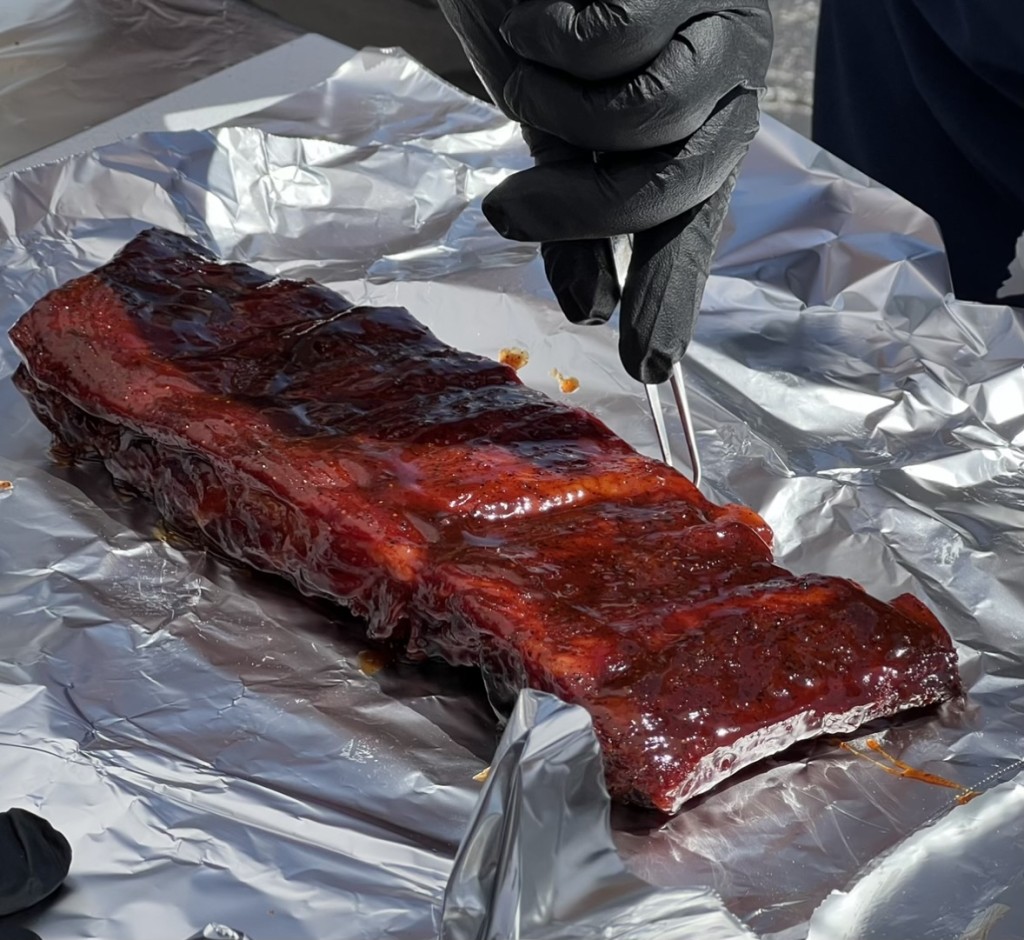 The Kansas City BBQ Society (KCBS) paired up competition pros with media amateurs in a barbeque competition to mark the start of National BBQ Month.

May has been National BBQ Month since 1963, so when you see that Justin Timberlake meme, roll out the smoker and dust off the grill because warmer weather and outdoor cooking season is upon us.

“May also used to be the actual start of BBQ competitions,” says KCBS Manager Amy Acock. “Now we have them all year; they even have one in the French Alps during winter.”

At the KCBS hosted event, professional pitmasters were paired with media members and tasked with making the best ribs and Bloody Marys possible in six hours. Kind of like Chopped but with more downtime and day drinking.

We at The Pitch were paired with the husband-wife team Dan and Angela Boles, better known by their team name, “All Forked-up for Q.” Other teams participating were: Plowboys BBQ, Grinders, Teebo Creek BBQ, Fergolicious BBQ, American Fire BBQ, and Meat Rushmore. Matched with those grillers were reps from Kansas City Magazine, KMBC 9, KSHB 41, and more.

Prairie Fresh provided ribs for the event, while 360 donated some KC Barbeque Vodka for the Bloody Mary.

The day started at 7 a.m. sharp, earlier than any of us at The Pitch have ever woken up. After going over the rules and the teams meeting one another, it was time to fire up the grills and start prep.

All Forked-up for Q impressively trimmed and dressed ribs while we at The Pitch essentially held the flashlight. Once ribs were on the grill, it was a waiting game. Barbeque competitions anticipate this and have developed a tradition of a 9:22 a.m. group toast and shot. Five Farms Irish Cream bottles were given to teams and thus became the 9:22 shot. [If you haven’t had Five Farms and want to step up your Irish Cream game, give it a taste.]

In the classic hurry-up-and-wait style, the teams then meandered and mingled while we all took in Stretch from Grinder’s playlist—it somehow featured Nelly and Lynard Skynard.

Would like to thank KC BBQ Society for having us out today for the annual local media team competition. Met great folks. @TheFastPitch team medaled 5th in ribs and 2nd in Bloody Marys—which feels on brand for the publication. We may need to revisit the battle cry of #IAmKcBS tho. pic.twitter.com/6Dow7xPrOr

After several hours, it was time to mop the ribs and make Bloody Marys. I don’t want to give away any trade secrets but our team did something with butter and tented foil that I will be using at cookouts going forward.

For the Bloody Mary, we used Zing Zang, mop sauce, lemon juice, pickle juice, and rib drippings to pair with the KC BBQ 360 Vodka. We garnished with a deboned rib, celery stalk, green olives, to go along with Gerken pickles, and a rim of spicy lime beer salt and rib rub.

Meat Rushmore and Joel Crews from Meat + Poultry took the day, winning the overall competition. But All Forked-up for Q and The Pitch took home some hardware. Our pairing won fifth place for ribs and second place for Bloody Mary—very on-brand for us.

[Look at the photos, fifth place ribs? We were robbed. Robbed I say!]