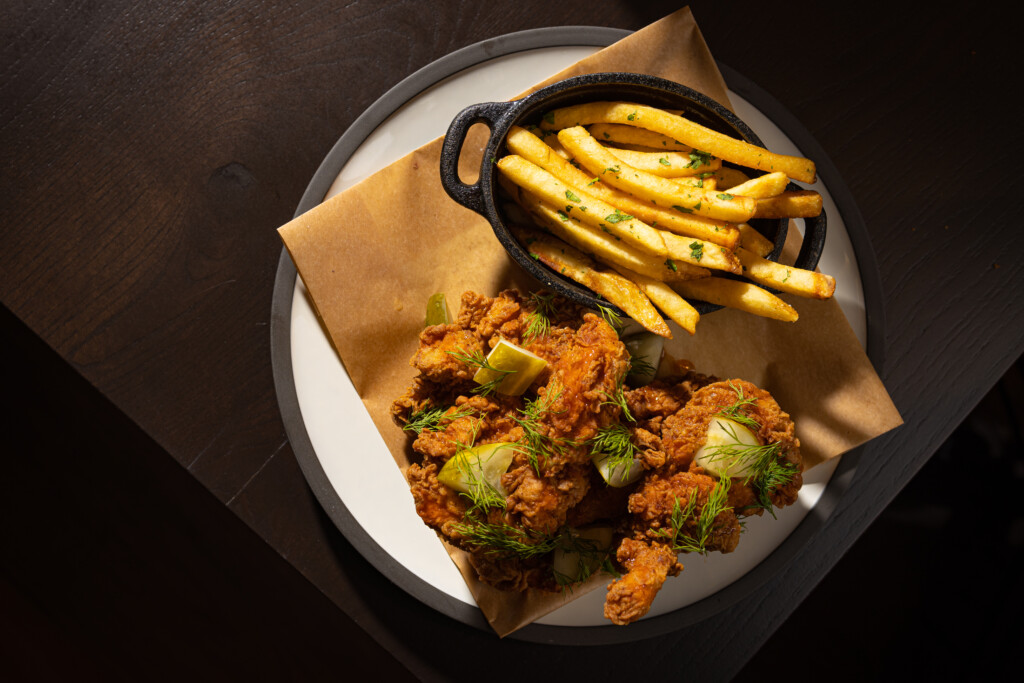 “We do things a little differently here,” the server said, and I felt a jolt of electricity course through my body. Restaurants have mostly retired that cliche by now—to resurrect it in 2022, they’ve gotta be doing something truly shocking, like delivering French fries via t-shirt cannon.

She continued. “We’ll have you put in all of your order at once, from appetizers through entrees, and the chef will course it out for you.”

To be fair, Acre, which opened in Parkville in August, hasn’t branded itself as an iconoclast. Chef-owner Andrew Longres cut his teeth at dependable outposts for fine dining, including a tour as the French Laundry’s sous chef and executive chef roles at The American and Bluestem. 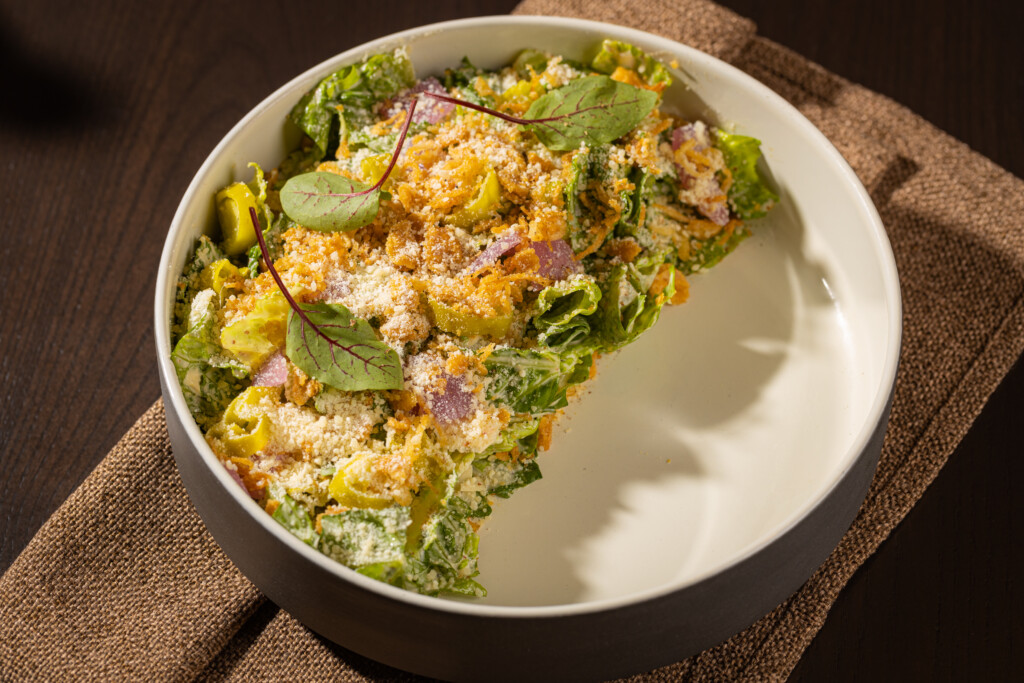 Fans of the latter will feel right at home in Acre’s sedate greige dining room, which echoes a few Bluestem design tropes (local firm Herron + Partners designed both dining rooms). The menu’s sensibilities are similar, too. Everything at Acre is made in-house, from the sauces to the buns, using local produce and proteins whenever possible.

One self-imposed constraint: everything the restaurant serves could—at least, theoretically—be grown at Rolling Acres, a Liberty, MO farm that belonged to Longres’ grandparents.

The name “Acre” is an homage to that farm. But it might also be a reference to the length the restaurant will go to decant little tureens of things into other things. Across my three visits, every course seemed to have some component that needed to be poured at the table—Fairy Tale pumpkin soup over a cherries-and-sorrel garnish, almond cream over a piece of trout, cognac cider over an apple cake. Even the Wooded Acre Martini ($16) was decanted tableside, with the excess presented in a little cork-stopped glass jar. I began to wonder if my dinner was being watched by a pervert with an extremely specific fetish. 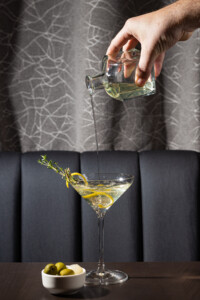 Fortunately, the martini warranted some pageantry. I like to grouse about offbeat martinis, but the Douglas fir character in Acre’s version was just-right, adding complexity to the drink without overwhelming it.

That martini is a menu fixture, but much of the cocktail menu at Acre changes frequently; Longres tells me bartending staff and general manager Kyle Bennett collaborate on the cocktails, most of which have novelistic ingredient lists. The Hunters Moon ($14) boasted aged rye gin, sweet vermouth, an unspecified aperitif, duck fat, black currant, cranberry, sage, bay leaf, and burlesque bitters.

Could I detect a third of those ingredients? No. Was the drink assertive and fun with a pleasingly astringent finish? Absolutely.

At times, those menu descriptions can feel more prankish than evocative. The Gunslinger ($14) sounded stiff and smoky, promising blended scotch and peat alongside citrus and spices and casein (a milk protein). But the drink was bluntly sweet, like an extra-honeyed Penicillin. By contrast, the Spellbound ($14), a split-base rum drink with warming spices and ginger and lime, was the brashest and booziest-tasing cocktail on the menu.

The beer list feels creaky and underdeveloped, given the restaurant’s Midwestern spotlight, but the wine selection is decent, and everything is available by the glass or bottle. The alcohol-free drinks also shine. The non-alcoholic peach shrub and soda ($8) was the best drink I had, with a warm blush from smoked chili and cinnamon and a bright vinegar tang to cleave through the orange soda.

The menu mixes steakhouse classics (dry-aged ribeyes, beef tartare) and more nostalgia-inflected Midwestern dishes. I enjoyed the smoked Caesar salad ($11), which adds fried saltines, chunky pickled shallots, and pepperoncini rings for fun and texture. And on my first visit, I loved the Crispy Wisconsin Cheese Curds ($12), plump and lightly/crisply breaded, served with a dense pimiento cheese for dipping. But when I ordered them again on my second visit, the order looked like it had come from the tail end of the fryer basket: more crumble than curd. 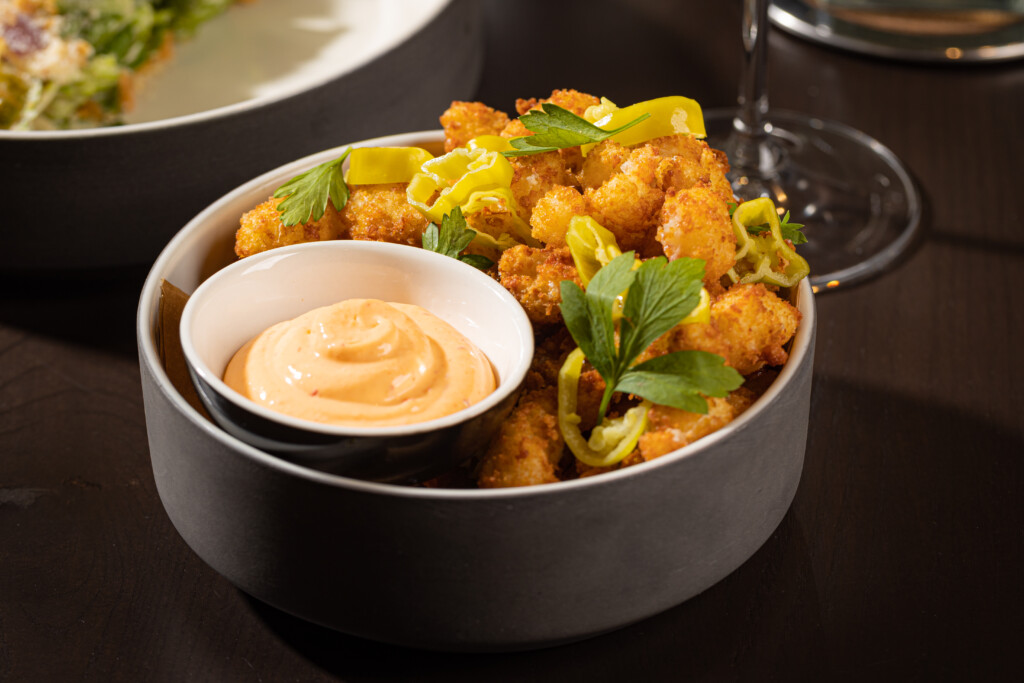 The steaks are a focal point of both the menu and the dining room. A cooler filled with dry-aging ribeyes greets guests next to the host stand, and the open kitchen offers an expansive view of strip loins sizzling on a wood-fired brasero-style grill (custom built for Acre by J & S Welding in Holt, MO).

My 14-ounce ribeye ($70), dry-aged for 40 days, was a showpiece with a beautiful (and flavorful) salt crust. It was also overcooked—though ordered medium rare, it arrived well past medium, with a pale pink center. The sides, too, seemed more style than substance. The butterball potatoes were the size of sausages and just as appealing, with taut, glossy skins. But the potatoes were lukewarm and bland; the veal glaze’s main contribution was fusing potato skin to my teeth. A ramekin of smoked horseradish crème fraiche helped, but it, too, seemed overly chaste. I can think of a lot more entertaining ways to blow $70.

It’s these more generically tony entrees where Acre struggles most; Longres’ heart doesn’t always seem in it. There was nothing technically wrong with an Idaho ruby trout almondine ($38) with Minnesota wild rice and charred pole beans. But it was an upscale version of a meal I’ve been served at a dozen Sodexo-catered charity banquets—better ingredients, but still bland. 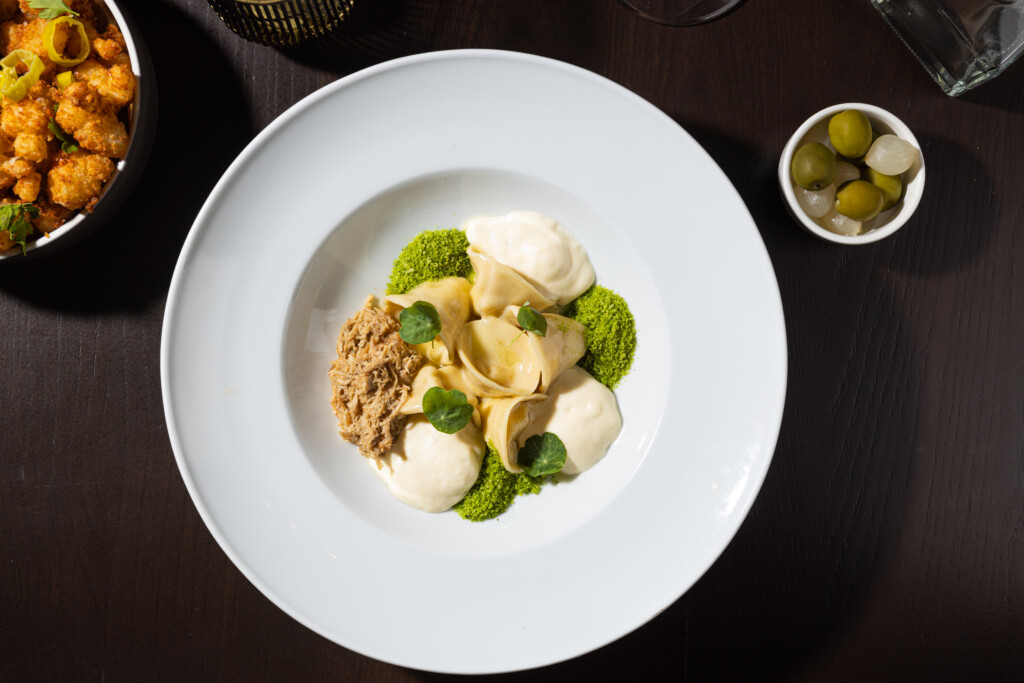 The best dishes here tend to be both the most casual and the least expensive. The dry-aged Black Angus Burger ($18) was cooked precisely to order and nearly perfect, with a lightly charred and salt-crusted patty, crispy bacon, and tangy red onion marmalade—not too sweet, as onion jam often is, and sparkling with vinegar and hot sauce. The house-made bun was not bisected evenly when I ordered it—the burger’s bottom bun quickly disintegrated in the moisture from the patty—but for once, I didn’t mind the mess.

The most compelling reason to visit Acre may be the Crispy Pickled Chicken ($25), which is some of the best upscale fried chicken I’ve tried. The boneless chicken thighs and tenderloin were implausibly juicy—Longres uses pickle juice in his brine in honor of an old family recipe—and confidently seasoned with hot sauce, honey, and a heavy application of fresh dill. And the square-cut garlic fries were so fresh and crisp they retained their crunch after a full day of languishing in a to-go box in my fridge.

The desserts, which Longres says are a collaboration between him and pastry chef Brooke Davis, are a bit uneven. The honey apple cake ($11) was both dry and shy on apple flavor, overpowered by the honey. But the restaurant seems to be making edits: when I returned a week later, the cake was gone from the menu. In its place was a pumpkin cheesecake ($11), which had a soft, airy texture closer to a whipped pumpkin pie. It was fine in its own right, but cheesecake lovers may be disappointed.

The best dessert was also the least seasonally appropriate: Maxine’s lemon cake ($11), named for Longres’ grandmother. The bright lemon cake was served in three wedges to boost the proportion of thickly glazed edges. It was so good I didn’t question why it was being served with “summer berries” (strawberries, blueberries) in November. 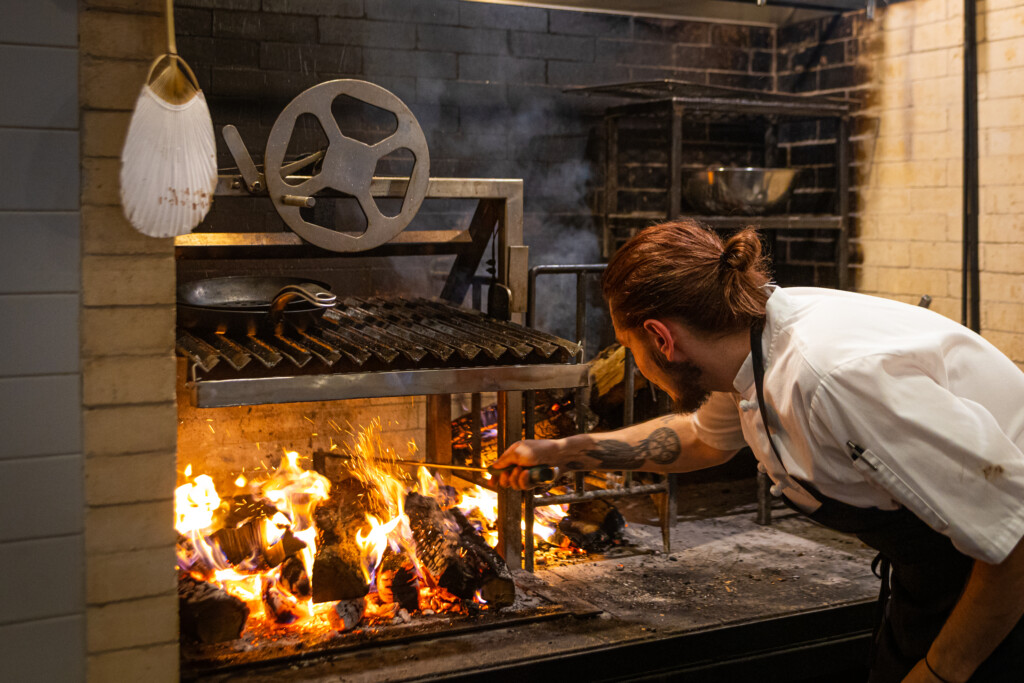 Staff tends to the pit. // Photo by Zach Bauman

Acre is the most fun (and the most delicious) when it leans into its nostalgic impulses—when it flirts with a little retro kitsch. But right now, the restaurant doesn’t seem willing to commit to the bit. Flashes of brilliance and heart are weighed down with too many stolid, safe bets—beet and goat cheese salad, whipped ricotta and crostini.

If that’s what Longres wants to bring to Parkville, I suppose that’s fair enough. The full dining rooms across my three visits—a mix of families, couples, and conspicuous lawyers—suggest the restaurant is finding its customer base.

There’s no mandate that every restaurant “do things a little differently,” after all—just that it live up to its own ambitions. But Longres has the chops to take Acre farther still.