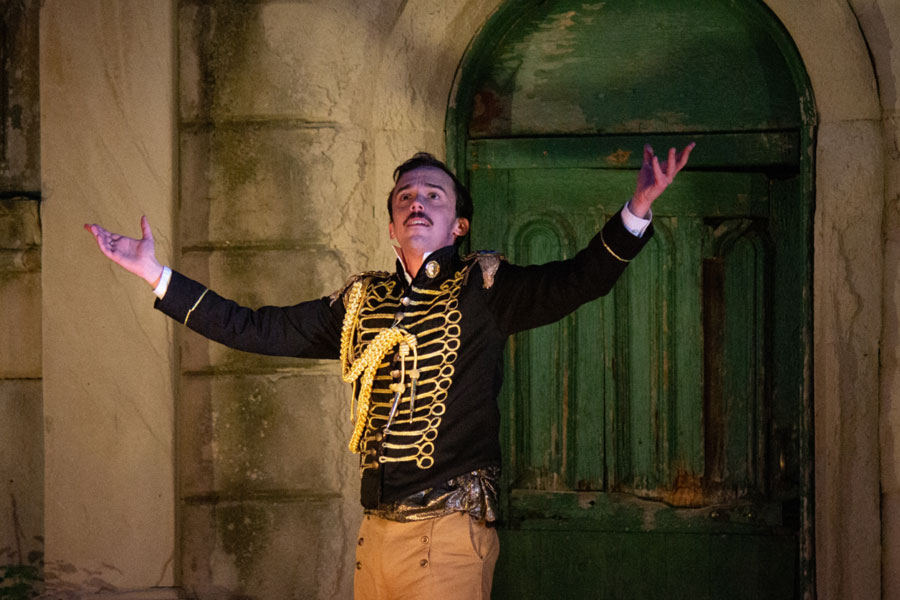 R.H. Wilhoit (as The Confidant) in The Coterie and Union Cemetery Historical Society’s co-production of Electric Poe. // Photo by Jordan Spatz and courtesy of The Coterie Theatre.

Kansas City theaters have been dark for months. Barring a miracle, they’re likely to be dark months longer. But the evicted artists have been doing what they do best—getting creative.

Electric Poe, an outdoor co-production of The Coterie Theatre and the Union Cemetery Historical Society, offers something of a map for theaters considering how to make public art in our suddenly private society. In short: stage it outdoors. Spaced apart. And with source material that benefits from—not just tolerates—that treatment.

“The Premature Burial” seems like an easy adaptation in that it was essentially a monologue to begin with: Poe wrote the tale from the perspective of a man terrified of being buried alive. Although the first half of the tale is a bit passive—The Coterie’s marketing material describes it as an “antique TED talk”—Wilhoit commands attention throughout, giving the fussbudget narrator a quivering, high-pitched voice and the mannerisms of an anxious pangolin.

But “The Masque of The Red Death” is the program highlight, with greater immediacy and gripping direction that transforms Hobart into Wilhoit’s grotesque scene partner. The tale has been rewritten from the perspective of Prince Prospero (Wilhoit), who throws a sumptuous lockdown party for Italian nobility while the rabble perish from a contagious plague outside his doors. “The external world could take care of itself,” Wilhoit proclaims with just a trace of a sneer. “My abbey is provisioned.”

The external world, of course, takes care of him. The Coterie’s production design dials up the horror of Prospero’s eventual downfall. The costumes, credited to resident designer Georgianna Londré Buchanan, are rich with sumptuous details and gothic flourishes, from Wilhoit’s posh epaulettes and gold trim to Hobart’s contorted plague mask and mocking red-feathered hat. Lighting designer Jarrett Bertoncin exploits the setting with strip lights that cast pale, eerie shadows on headstones and a soot-tinged mausoleum. Flashlights serve as follow spots.

“The Masque of the Red Death” was always going to seem newly resonant during a pandemic, and The Coterie’s production is genuinely creepy (Hobart’s leering guitar chords are a major part of the chill). But the text also grants an odd sort of wish fulfillment in These Unprecedented Times. Only in fiction, it seems, can an insulated cadre of wealthy rulers indifferent to common concerns actually be forced to confront the consequences of their carelessness.

The show runs through October 31, and you should make time for it if you can. Putting on a show neck-deep in a pandemic of course means flouting a few conventions. Instead of reserving a seat, you reserve a socially distant “plot”—a pre-spaced blanket on the cemetery lawn—and stay within its confines until a house manager dismisses you. Instead of scanning a paper program, you scan a QR code laminated on a tombstone-shaped placard. Masks are mandatory, food and drink are prohibited, and the house managers are judicious. Within seconds of setting out my camp chair, someone came by to inform me that one of its legs was lolling outside the plot (this made me feel safe and only marginally embarrassed).

So, yes, the atmosphere has changed. The art? Not so much. Director Jeff Church has staged a show that would feel right at home in a year not shrouded in a pea-soup fog of anxiety and incalculable human loss.