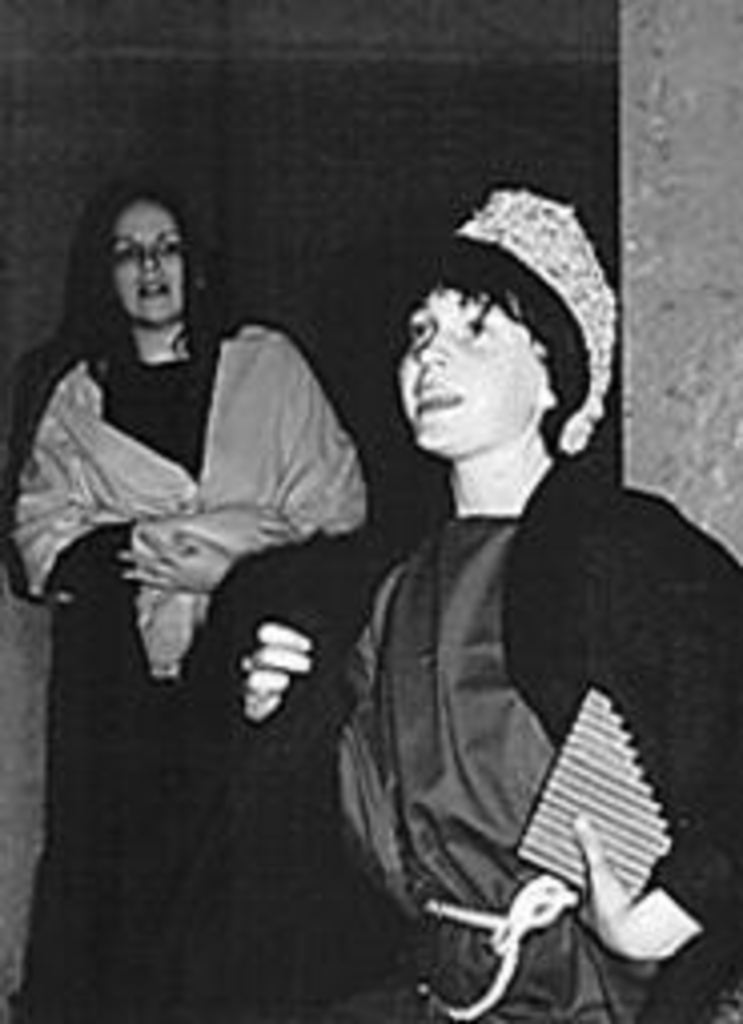 Although the Banjo Ghost looks a lot like Randy at Music Exchange, he’s someone else — in spirit. That’s why he goes by the name Banjo Ghost, not Randy, when performing. “When I play the banjo, I feel like it’s someone else doing it,” he says. “It’s like the ghost comes upon me.” The Banjo Ghost plays an average of three or four gigs a month, and Randy has solicited none of them, which adds to the feeling that the Ghost is in charge.When the Banjo Ghost plays at 9 p.m. at the Cup and Saucer (412 Delaware, 816-474-7375), he’ll perform his usual blend of gospel and traditional music, singing harmoniously along. He’ll also pull out some of his homemade instruments, including a guitar made out of a film reel canister.

Randy admits that the Banjo Ghost, though hopeful, plays music that could be construed as depressing. Luckily, he’s paired with Shari Elf. By the end of the night, listeners’ emotional barometers ought to level out somewhere between the extremes struck by the angelic Elf and the solemn Ghost.— Gina Kaufmann

Blessed with the aurally pleasing moniker Opera Kadopera, a new touring company devoted to broadening opera’s accessibility is mounting Amahl and the Night Visitors throughout the city until January 4. Giancarlo Menotti’s opera has at its center a lame shepherd boy, Amahl, who happens to be in the vicinity of the Three Kings on the night of Jesus’ birth. The cast consists of a rotating repertory company of seventy volunteers between the ages of ten and sixty, who perform in several area churches in addition to Grant Recital Hall on the University of Missouri-Kansas City campus. For more information, e-mail the troupe at operakadopera@yahoo.com or see operakadopera.org.— Steve Walker

Be a karaoke star.

If the stress of the season isn’t enough, Christmas carolers heckle last-minute shoppers with ubiquitous yuletide songs, which they consider festive. The fact is, these goody-goodies are in dire need of a little more wassail. If you’re not down with the Dickens, you can sing your own damn sleighing song tonight at Missie B’s (805 West 39th Street, 816-561-0625). Tuesdays and Thursdays, David Lee (not Lee Roth, just Lee) hosts karaoke. If you sing only in the privacy of your car or shower or some other secret place, this is a chance to show the crowd what you can do. With $7 all-you-can-drink specials on well drinks and beer, you can swill off inhibitions and sing like the star you are. Remember: The more you drink, the better you think you sound.— David Wayne Reed