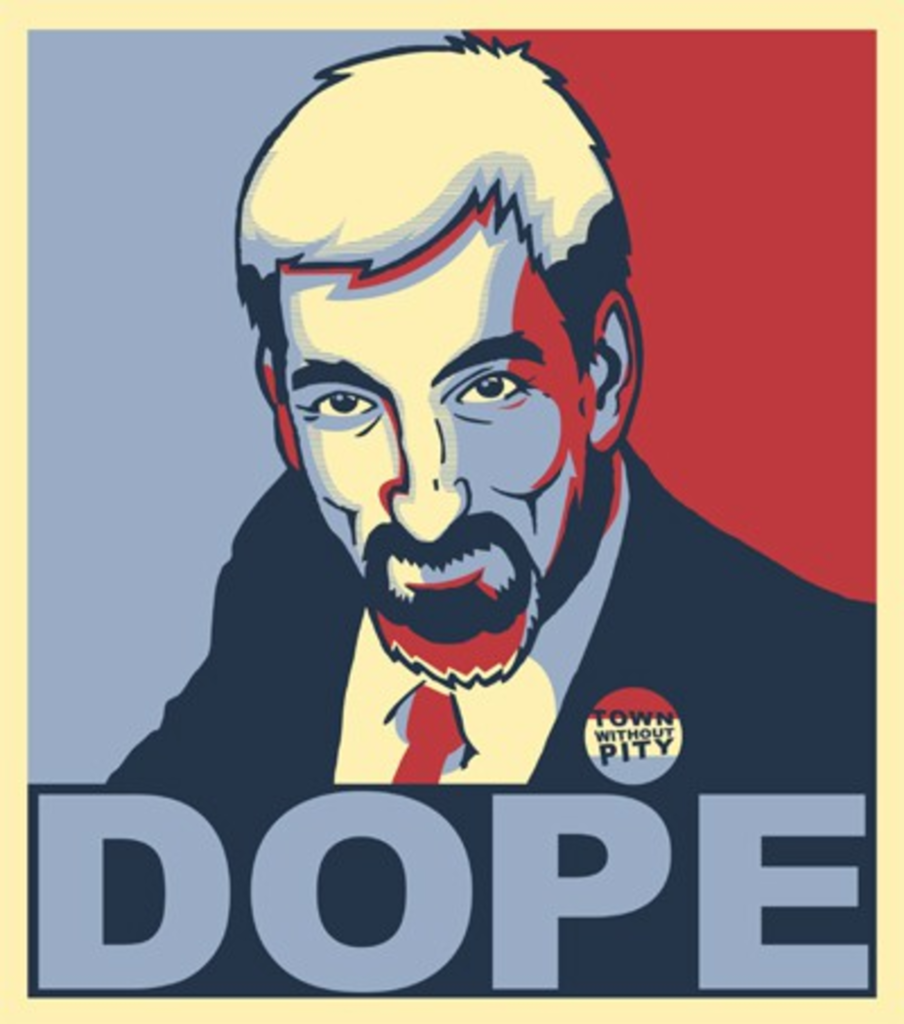 No one is running Kansas City, Missouri, so thank goodness there’s a big daily paper to keep an eye on things. What? Uh oh. Hang on — there’s a new source for unbiased information on the Web? Awesome. Some of the laid-off lifers from The Kansas City Star must be … oh.

As legal action continues to swirl around City Hall, comments made in a deposition by Ed Wolf, Mayor Mark Funkhouser‘s former chief of staff, became public last week. Wolf answered questions posed by an attorney for Ruth Bates, former aide to the mayor, who has filed a lawsuit alleging that Funkhouser’s wife, Gloria Squitiro, then a volunteer in the mayor’s office, called her “mammy.” Bates also says she was paid an unfairly low salary.

Wolf’s description of life at City Hall with Ozzy and Sharon: “I guess it was kind of like having your mother-in-law go along on your honeymoon.”

David Martin’s November 13 post, “Ex-chief of staff felt Squitiro should stay home,” scooped The Kansas City Star by a few hours, allowing Pitch.com readers to begin quoting Wolf over dinner that night. Unless the in-laws were coming over for the usual Salisbury steak and to pass the silence.

Wolf’s testimony in the 200-page deposition opens a window — a window with lovely treatments that say “home” — onto the bizarre workings of a troubled mayor’s office. Until someone mounts an ice show or departed communications director Joe Miller writes a book, here’s the short version: Squitiro showed up on day one of Funkhouser’s administration. Bates filed her lawsuit, which depicts Squitiro as a Tourette’s patient reciting a book of dirty limericks, in June. In September, the City Council — sensing liability, a public-relations nightmare and an opportunity to square off against a newbie elected official noted for his poker-faced stubbornness — passed an ordinance prohibiting relatives and spouses from volunteering for the city. Funkhouser vetoed the Dear Gloria letter. The council overrode the veto. This month, Funkhouser filed a lawsuit seeking to overturn the ordinance. The Star‘s editorial board went, Jesus fucking Christ!

Wolf describes Squitiro in the deposition as a disruptive, almost manic figure: “[S]he can be very friendly, very social, very outgoing, she can be moody. I think she has highs and lows. And I think that — well, when she has a low, she’s kind of standoffish and can be, I think, suspicious of others’ actions.”

Bonus: According to Wolf’s testimony, on more than one occasion, Squitiro referred to Burnetta Burtin, Wolf’s former executive assistant (who is African-American), as “Bernie Mac.” Now that Bernie Mac is dead, that sounds even worse.

Confidential to Gloria: You’re reportedly pissed that your insurance company just settled your part of the lawsuit without consulting you. Chill out — if you had lost in court, the damages would have been calculated in real money, and your Redd Foxx records wouldn’t have counted as compensation.

With the market for everything except bad news collapsing or already in ruins, it was no surprise that the Star last week held its third employee fire sale in six months. But the 50 staffers exiting KC’s shrinking daily had it coming, if you ask longtime Republican battle ax (“Mary Quite Contrary,” July 18, 2002) and newly elected Kansas state Sen. Mary Pilcher Cook.

As Justin Kendall reported in his November 13 post “The real reason behind the Star layoffs,” Cook owns a 42.5 percent interest in the Web site Kansasliberty.com. The self-proclaimed “fair and factual news site” has spent much of its short history attacking the Star and The Wichita Eagle and their corporate parent, the McClatchy Company, for what Kansas Liberty’s unnamed scribes, citing anonymous media critics, call liberal bias.

After news of the purge broke, a Kansas Liberty story speculated that 2008 “may also be the last year in Star history if [publisher Mark] Zieman is unsuccessful in turning around the failing newspaper.”

Indeed, the Star could learn a thing or two from Kansas Liberty about how to work that syndication dollar. A story headlined “KC Star cuts more jobs” — which mirrored a September 16 Kansas Liberty piece about the second round of McClatchy layoffs — somehow wandered into the October edition of Metro Voice, a local Christian newspaper.

Both explain the newspaper business (and spooky reader voodoo) better than anyone actually working in it could: “Many critics say the papers have alienated at least half their potential readership because of their strident partisan tone and their failure to connect with the concerns of Midwestern readers. Many conservative Republicans now consider the Eagle and the Star to be adversaries and wish the papers ill. News commentators have noted that the vice-presidential campaign of Sarah Palin seems to gather momentum every time the press attempts to ridicule her.”

Hey, Gov. Palin — you look hot in those heels, but you suck. Ack … argh … gasp … wait, did someone wish this paper ill? Thud.

Documents filed with the Kansas Secretary of State’s Office do not specify what person or interest owns the other 57.5 percent of Kansas Liberty, which appears to have gone live this past March. Calls to Cook and to the number listed for Kansas Liberty’s office were not returned.

“Our fresh information comes from exclusive interviews and sources that the mainstream media either won’t touch or doesn’t have access to,” the site claims. It’s true that many in the mainstream media prefer not to hug, cuddle and fondle some sources, but some would say that reporters will talk to anyone. And some of the people who would say that would also say, without hesitation and maybe even on the record, that large swaths of Kansas Liberty’s content are batshit crazy. Like what, some would ask?

Well, there’s this shaky little argument from an October 23 Kansas Liberty story: “One of the few exciting developments for the Star has been the reaction to the paper’s recent assertion that anyone who calls Democratic presidential nominee Barack Obama‘s [sic] a ‘socialist’ is a racist. Last week, Obama promised to ‘spread the wealth around.’ “

Actually, anyone who calls President-elect Obama a socialist is a moron, and anyone who was afraid to vote for him is a racist. See how that’s done, Mary? Go big or go home.