Eclipsed, at the Unicorn: women at war, looking for peace 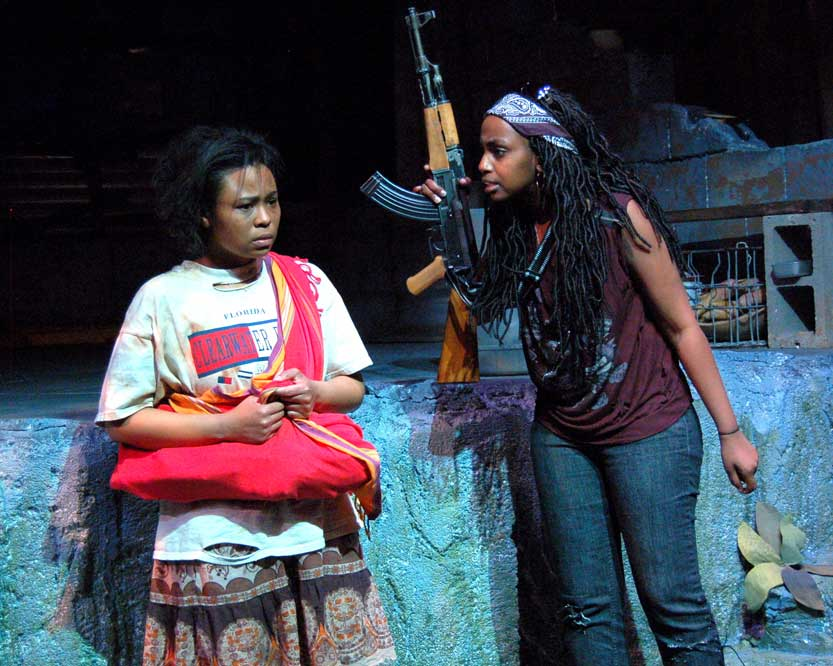 Trigger warning: everything. Eclipsed, now playing at the Unicorn Theatre, covers a series of tragic particulars in its focus on 2003 Liberia: rape, hunger, abuse, abandonment. But the script isn’t steeped in pity or clichés about noble suffering. In fact, it’s partly a comedy — and that’s key to its success.

The play opens in a slanted metal shack at a Liberian rebel camp, where Helena (Diane Yvette) and Bessie (Ashley Kennedy) bicker about clothes and their pecking order. Although the script lists their names, the women primarily refer to themselves as “Number One” (Helena) or “Number Two” (Bessie) — wives Nos. 1 and 2, that is, denoting the order in which they were abducted and raped by the rebel group’s commanding officer.

The C.O. never appears onstage, but his presence hangs like a shadow over every scene. Whenever he’s nearby, Helena and Bessie stuff a teenage girl (Teisha M. Bankston) under a washtub to protect her.

Of course, this is a drama, and the Girl doesn’t stay hidden for long. She soon becomes the C.O’s “Number Four” and clear favorite, forcing all three women to re-evaluate their roles.

Playwright Danai Gurira (fans of The Walking Dead may know her as Michonne) starts from the crucial — and curiously radical — view that these women are as fully human, vibrant and complex as the subjects of any privileged domestic drama. Which means: jokes about Tupac and bad weaves are sprinkled through scenes that make life at the camp seem almost mundane. The women argue about chores, whine about too much (or not enough) cassava and take turns listening to the Girl read aloud from an outdated biography of Bill Clinton.

But the idyll is punctured as soon as the C.O. calls for one of the “wives.” In those moments, we realize that the shack is a motivated deception, an attempt for these women to claim some shred of normalcy and control in their lives.

Yvette anchors the cast with her commanding portrayal of Helena. Although she rules the shack with an iron fist, her actions reveal a more tender, maternal side. Yvette’s Act 2 monologue is the highlight of the show, roiling with bitterness and barbed relief as she considers how to return to a life that was stolen from her.

As Bessie, Kennedy delivers a strong comic performance with moments of surprising tenderness. Of all the women in the show, Bessie seems the least porous. Although she has endured her share of trauma (she begins the show pregnant with the C.O.’s baby), she maintains both her vanity and her sense of humor throughout the play. That inherent toughness makes her late-play decision seem natural when, in a less capable actor’s hands, it might read like capitulation.

Teisha M. Bankston makes an indelible impression as the Girl, particularly in Act I. Bankston has a firm read on innocence and the girlish urge to deny it, smiling and laughing in spite of herself. Njeri Mungai is appropriately fiery (and persuasive) as Maima, a former “wife” who joined the fighters to protect herself. And Amber McKinnon delivers a restrained and convincing performance as Rita, a woman who comes to the camp to negotiate a cease fire and stays to negotiate a better future for the women.

The tension between Rita and the “wives” is apparent and forged largely by status — Rita is able to code-switch between Liberian English and American English to suit her purpose, and commands respect from the soldiers based on her position. The other women largely speak in a Liberian dialect and with Liberian idioms — which can take some time for an American ear to understand. (A sample line: “HELENA: How you go’ tank me for cookin’? Dat whot I do, dat whot we do ‘ere, how you tank for dat, you off oh.”) But the Unicorn’s cast — under the skilled direction of Cynthia Levin — keeps the intention of each utterance crystal clear.

Levin, taking a cue from the show’s Broadway premiere, has assembled an all-female creative team. Although most of the play takes place in the shack (rendered in handsome detail), Emily Swenson’s dynamic set also allows for scenes in the camp and in a jungle in the height of battle. Leah Mazur’s costumes effectively highlight changes in status and deliver a jolt to American senses. (Thank Mazur for one of the play’s most arresting images: the Girl, cleaning herself after a rape, in a torn and stained T-shirt advertising Clearwater Beach, Florida.)

Nicole Jaja’s lights define clear playing areas, and Jae Shanks’ sounds evoke realistic gunfire and patchy radio signals. One quibble: a combined light-and-sound cue for the C.O’s approach was hard to interpret and pulled me out of the play. The low rumbling suggested modern warfare rather than abstract dread, and a gobo didn’t go far enough in transforming a spotlight into (presumably) the male gaze.

Ultimately, Eclipsed excels in its dogged focus on the women, rather than on the men who have shaped their lives. The play is less about the ravages of war than about their uncertain paths out of it. Maima finds empowerment through force, Rita through education. Bessie carves out an alternative of her own. Notably, Gurira doesn’t privilege any of the three paths. The result is an intimate portrait of the different ways women protect themselves in war — and the sacrifices they make along the way.