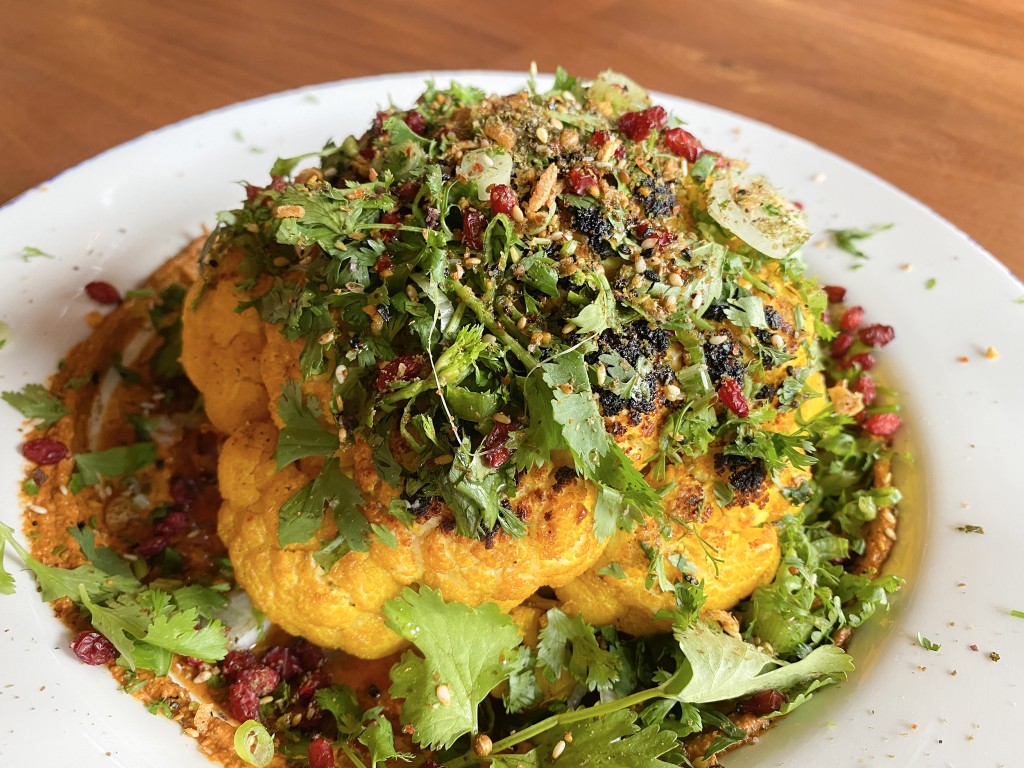 The whole cauliflower from Extra Virgin. // Photo by April Fleming

When James Beard award-winning chef Michael Smith announced a revamp of the menu at Extra Virgin after 13 years, he could have moved in any direction. A frequent traveler, Smith has featured ingredients and preparations from all over the world in his three restaurants throughout the years. In 2021 he could have given us just about anything. Yet, as is clear with his Italian restaurant next door and this makeover, Smith loves cooking with Mediterranean ingredients. (With this, we all win).

There are some really great new dishes on Smith’s menu. Sumac-roasted chicken thighs come heaped with roasted, slightly caramelized onions and fresh-made flatbread; za’atar-dusted calamari rests atop a smear of saffron aioli; and feta cheese is roasted with Egyptian dukkah and served with pickled red onions.

One dish, though, has single-handedly brought me back to Extra Virgin three times in three weeks since the menu switchover was made. It is the whole cauliflower. Yes, an entire uncut head of cauliflower.

Here’s where that big brassica encounters magic: That big ol’ whole head of cauliflower is poached in turmeric water and then roasted in the wood oven before being slathered in a wildly flavorful house romesco, fresh tahini, handfuls of torn herbs, pickled mustard seed, and barberries (tart dried berries that are used frequently in Iranian cuisine).

It’s maybe the most colorful dish I’ve encountered in a year, and it also manages to toe that rare line of being both savory and rich—as well as memorably bright and fresh. The roasted red pepper romesco is stick-to-your-ribs stuff, but that richness is balanced by some bright and creamy tahini, plus loads of fresh herbs and tangy berries.

So while I have never in my life intended to go to a restaurant just to get a whole head of anything, I’m currently staring down the barrel of ordering the cauliflower for what will be my fourth time in a month. It’s feeling like a pretty good decision.