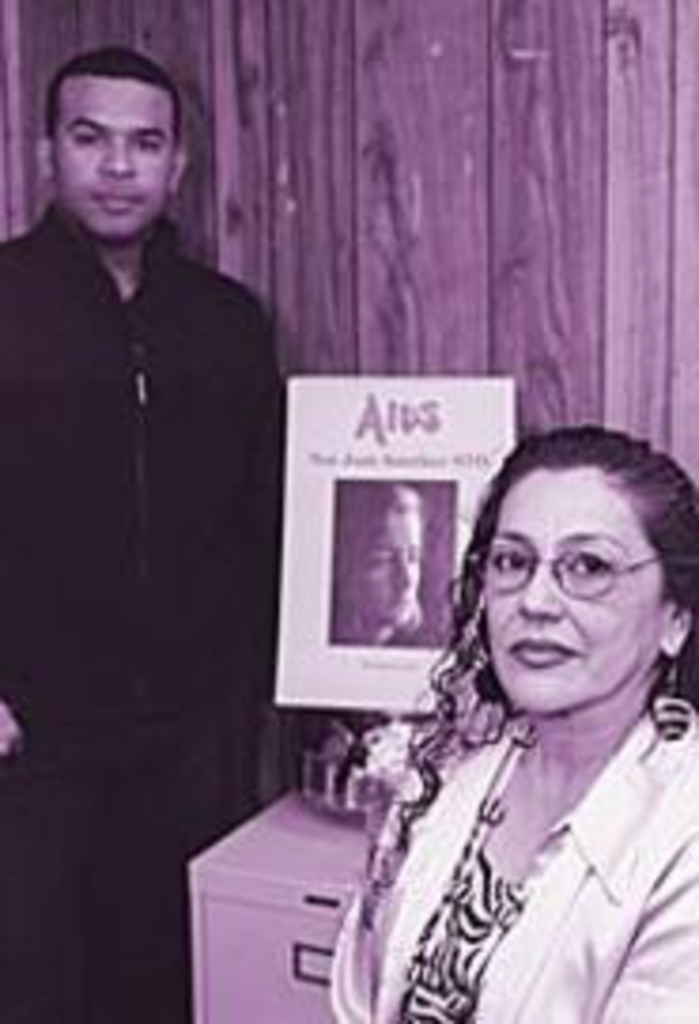 Maria Reyes welcomed the opportunity to become a volunteer in the battle against HIV/AIDS 10 years ago. “I knew it was going to eventually hit my community,” says Reyes, who is of Mexican descent.

For her efforts the past decade — including street outreach programs for the homeless and the undocumented immigrant poor at the Guadalupe Center— Reyes last year received a Ribbon of Hope community service award from the AIDS Service Foundation.

As a volunteer, case manager, and educator, Reyes has few peers serving an often overlooked segment of the population. And Reyes knows what it feels like to be overlooked. Three years ago, Guadalupe Center was denied $25,000 in federal funds from a grant program established in honor of Ryan White, the teenage hemophiliac from Indiana whose life and AIDS-related death in 1990 drew international attention to the disease.

Congress passed the Ryan White CARE Act to assist states and cities hit by the HIV/AIDS epidemic. Under the Title I portion of the act, the Kansas City Health Department is responsible for allocating millions of dollars annually to metro area service agencies that provide case management, medical and dental care, medications, housing referral, and emergency financial assistance for people with HIV/AIDS. The department works with a 51-member Ryan White Planning Council, an appointed consortium of agencies and people living with HIV and AIDS that decides how much money should be allocated to the various services. This year, the federal government awarded Kansas City $3.5 million.

But controversies have dogged the Ryan White program and Kansas City’s Health department for the better part of five years. In late 1995, massive overspending of Ryan White dollars forced officials to apologize for an “administrative fiasco.” Two years later, a surplus created more problems and kept funds from being distributed by the end of the program’s fiscal year. The same year, then-mayor Emanuel Cleaver dismissed his AIDS liaison amid allegations that the health department ignored funding requests from minority AIDS groups. And the denial of funds to Guadalupe Center resulted in more controversy when Cleaver criticized some city staff members for intimidating Hispanic AIDS care providers who sought federal funds.

As a result of mounting complaints about the health department’s handling of the Ryan White program, the Kansas City Auditor’s Office looked into the situation. The audit, released in March 1999, found no evidence of “unfair treatment of proposals submitted by service providers seeking White contracts.” But it criticized the health department and planning council for heightening suspicions about financial improprieties and discriminatory practices, and it recommended the department improve communication between itself and its constituents. The report also noted the findings of federal studies that determined “minorities encounter obstacles that prevent them from receiving equal access to Ryan White care.”

Diane Rojas, associate director of social services for Guadalupe Center, says her agency was forced to obtain private funding after losing out on its bids for a Ryan White service contract. “AIDS disproportionately affects Latinos and blacks,” Rojas says. “It was a frustrating process in 1997 because we were asking the health department to be responsible for the needs of the Hispanic community.”

But Rojas says Guadalupe Center’s frustrations eased last last year, when she started receiving notices and phone calls from health department and planning council representatives seeking an application from her agency. “I think we had been hollering for so long that they finally stepped up to the plate,” Rojas says. “We have been encouraged by their response.”

This year, Guadalupe Center was awarded a $45,000 case-management contract. The funds help cover the cost of hiring a full-time case manager, Gengis Noboa, which allows Reyes to concentrate on community outreach and health and risk education.

In spite of Guadalupe’s good fortune this year, however, more rumblings about problems with the Ryan White program were sounded out last month in Kansas City. Some members of the planning council say the problems continue to endanger Kansas City’s eligibility for funds.

“I think the integrity of the process of handling $3 million targeted for people living with AIDS is threatened,” says Bruce T. Hall, the planning council’s vice chairman. “People have complained and written letters, and that reflects what’s happening. The contracts always go to the white agencies, and the new and emerging agencies by and for people of color are not being invited into the grant process.”

Hall penned a letter of complaint to the Health Resources and Services Administration (HRSA), the federal agency that oversees the Ryan White program, in late September. The letter accused Kansas City’s planning council and the health department of failing to fulfill responsibilities under the Ryan White Act. As chairman of the planning council in 1999, Hall admitted he was “ignorant” of certain requirements but was unable to get much cooperation from the council and the health department when he realized they were making mistakes in allocating funds. “The (health department) has not consistently disbursed funds in an efficient and effective manner,” he wrote.

As recently as last year, federal officials cited Kansas City for its problems maintaining minority membership on the planning council. Kansas City also has been required to undergo additional technical training to correct procedural problems threatening its compliance with Ryan White guidelines. Cities are required to reapply for Ryan White funds each year, and Kansas City has been asked to submit its application on the condition of fixing the problems.

Perceptions of bias against minorities have alienated agencies and individuals who want to be a part of the Ryan White program, sources tell Pitch Weekly. The planning council’s membership is supposed to represent the demographic makeup of the disease in each city; at least one-third of the council’s members must be people living with HIV. “The first years I tried to get on the planning council, they blocked my nomination,” says Kenneth Shaw, who is black and has HIV. “I was an advocate for the consumers and I came to the meetings. There were people getting on the council who had never been to the meetings.”

Shaw says the renewed allegations of racism and compliance failures continue to damage the reputation of Kansas City’s Ryan White program. Among the current complaints are that metro agencies in Kansas have been shortchanged on funds. And planning council members have criticized Judy Moore-Nichols, director of the health department’s AIDS program, for allegedly using her position to improperly influence and direct the distribution of Ryan White dollars. Moore-Nichols is responsible for implementing the planning council’s funding recommendations.

She downplays the latest wave of controversy, although an HRSA official has suggested the Kansas City Health Department turn over its duties to the AIDS Council of Greater Kansas City.

“We’ve had one of the best records of any city for getting competitive awards for Ryan White and meeting qualifications. One year our application had one of the highest scores in the United States,” Moore-Nichols says. “(HRSA) said there were some improvements we needed to make, but the issues were more systematic and structural. We are making improvements.”

According to an HRSA spokesman, Kansas City has not received an unusually high number of complaints since the city auditor’s report was released. “They made noise in Kansas City and the problem was addressed,” says Tom Flavin. “That’s the strength and wisdom of the Ryan White Care Act. Local people know local problems, and we think the model is working.”

But the problems appear to be far from being resolved.

In letters to HRSA during the past two months, both Missouri and Kansas state health department officials alleged that the Kansas City program, which services 11 metro-area counties in Missouri and Kansas, was denying residents coverage of AIDS-medication expenses. At issue was $265,000 that could have been used to pay for medications in Kansas, but instead the health department set it aside for lower-priority expenditures.

Michael Moser, Kansas’ director of health, pointed out that his state was facing a “severe shortfall” in medication funding even though funds were available through the Ryan White program. “Without prompt remedial action, the grant year will end without these funds expended to meet recognized needs of eligible Kansas City-area residents,” Moser wrote to HRSA. “This is unacceptable to the state of Kansas and would raise significant questions about the integrity of the Ryan White Title I program in Kansas City.”

Mary T. Menges of the Missouri Department of Health’s STD/HIV/AIDS Prevention and Care Service told HRSA that the Ryan White program’s reluctance to better allocate funds for medications is “unconscionable. To cause another program to spend money it does not have in order to maintain clients’ access to precious HIV medications … is both uncooperative and unprofessional.”

On October 13, Pearl Katz, an HRSA project officer, sent a note to the members of the Kansas City planning council acknowledging complaints that the program was improperly reallocating medication funds. Katz urged the Kansas City program to “consider how you will best fulfill your allocation commitments to the people living with HIV and AIDS in Kansas City in your decision-making processes.”

Four days later, at the planning council’s monthly meeting, the Kansas City Health Department was criticized for apparently misguiding funds against the membership’s recommendations. A resolution to the Kansas medication problem has yet to be reached, but Moore-Nichols says she is confident the funds eventually will go to the right place.

“We are working very hard on it,” Moore-Nichols says.

Others disagree. “Nobody cares about the positive community unless money is being threatened,” Hall says. “As soon as a threat happens, people get religion. When people living with AIDS are ignored by the people in charge, it’s serious. It’s appalling.”