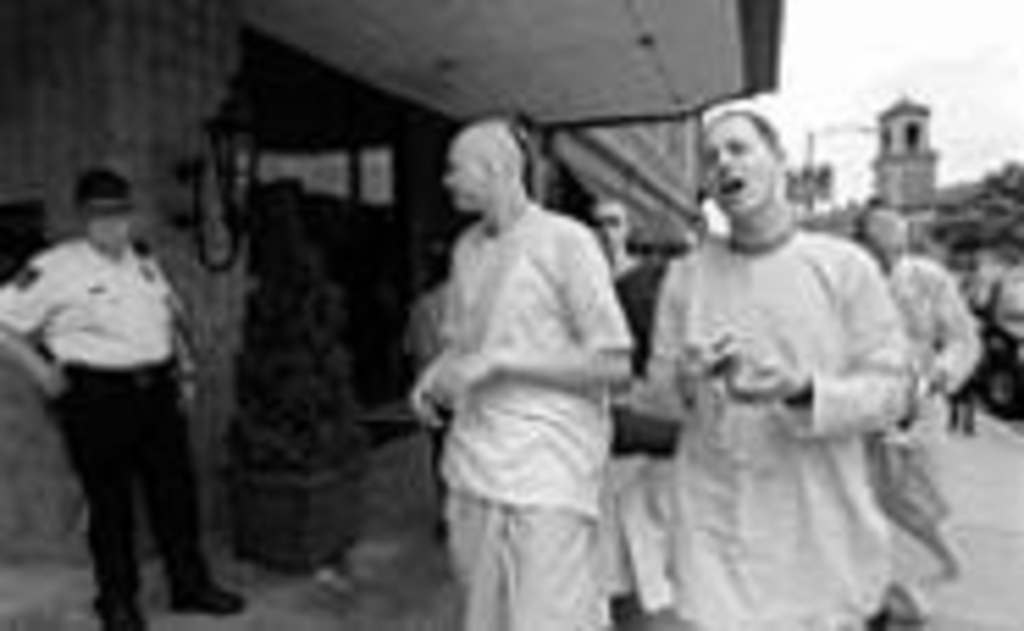 It’s a balmy Saturday night on the Plaza. A minivan from Kansas slows alongside a dozen or so young men dancing ecstatically across the street from Helzberg Diamonds. “Hare Krishna, Hare Krishna, Krishna Krishna, Hare Hare,” the saffron-robed men chant as they wave their arms above their shaved heads. One devotee beats a drum strapped to his side. Others ping tiny cymbals between their fingers and twirl about.

A woman leans out the passenger window of the van and snaps a photograph. Wide-eyed children in the back seat press their faces against the glass. Stretch limousines full of prom couples coast by, and a tuxedoed teen-age boy and his giggling date pop up from a moon roof. “Hare Krishna, Hare Krishna,” the teens chant loudly before disappearing behind tinted windows.

“It’s just another Plaza sight,” muses a man in a black cap with “Redneck” stitched in red. “At least they’re having fun.” In other cities, the strange young men would be ignored, but in culture-starved Kansas City, with its cancelled jazz festival and ghost-town downtown, the Krishna devotees are the neatest thing since fiberglass cows.

They have danced along Plaza sidewalks every Saturday night and on occasional Wednesday afternoons for the past three years, peddling vegetarian cookbooks and primers on reincarnation, soliciting “donations” of a dollar or two to cover publishing costs.

“Everybody digs us,” says John Griffin, a Kansas City devotee who has chanted all over the world. “Nowhere is as friendly and receptive as the Kansas City Plaza on a Saturday night.” Away from the Saturday night crowds, however, the Hare Krishnas must answer to the unenlightened.

Plaza public-safety officers have warned the Hare Krishnas: Don’t lean on our trash cans; keep off the gratings around the spindly trees; don’t touch the courtyard penguins. If a Hare Krishna sets one sandaled foot on a brick owned by the Plaza, he can go to jail.

The officers work for Highwoods Properties, which bought the Country Club Plaza from J.C. Nichols Realty in 1998. Devotees say the officers seem to be on a campaign to rid the district of its Krishna consciousness.

Next month, a devotee goes to court on a trespassing charge. He’d entered a shopper’s parking garage deemed off-limits by Highwoods. Karuna, a Croatian immigrant who attends the Rupanuga Vedic College for the International Society of Krishna Consciousness, at 52nd and Paseo, recounts in broken English the events that led to his arrest.

“I show books to one man. I ask for donation. He takes book and he go to parking garage,” says Karuna. “I go with him to the park place, and I ask him to give me back book.” As Karuna talked with the man in the garage, Plaza security officers converged on the scene. A Kansas City, Missouri, police officer hauled Karuna off to the Linwood police station, where he was ticketed for trespassing. He awaits a June 26 municipal court date.

The man who baited Karuna to the garage was an off-duty Highwoods security officer who had warned them before to steer clear of the Plaza.

“This guy set it up to lead our guy into a place where they had told us not to go; then they arrested him,” says Griffin, who says he had been warned by Highwoods security officers that the Hare Krishnas are not allowed to even park the school’s van in the Plaza garages. Karuna will plead not guilty to the trespassing charge. Meanwhile, Highwoods Properties continues to flex its territorial muscles.

Two weeks ago, on a quiet Wednesday afternoon, twelve or so devotees chanted and danced around the bronze boar statue in front of Steve’s Shoes. Within minutes, three Highwoods security officers roared up in white Chevy Blazers with yellow lights flashing.

“That’s it! You’re all going to jail!” college director Danavir Swami says the officers announced. “They must have said ‘go to jail’ a hundred times. They said we couldn’t be on their private property. They told us that all the fountains, all the benches, all the courtyards and all the trash cans belong to Highwoods.

“I said, ‘Well, everything does belong to God,'” Swami continues. “Then a female officer told me, ‘Not here. Here, Highwoods is God.'”

The devotees don’t know why they have been targeted. They don’t drag people from Plaza benches and force them to dance. They don’t harass anyone, except to sell their vegetarian cookbook — a steal at two bucks. They don’t even have bad breath: Devotees don’t eat onions or garlic to avoid increasing their “mode of passion,” which leads to loss of concentration, patience and tolerance.

Highwoods spokesperson Gayle Terry says security officers are not doing anything differently from the past, though they often “interact” with the Krishna devotees.

Besides that, the devotees put on a better show than other performers on the Plaza. A scraggly-haired man strums his guitar for three yawning people who might pass for statues on the rim of a gurgling fountain. A couple of blocks away, another lonely performer croons into a rickety microphone, Old man, look at my life. And earlier this month, the Plaza Live summer entertainment series began bringing Highwoods-approved performers to the district’s courtyards.

Of course, the Highwoods security guards have a few allies among the Plaza’s visitors.

“I think they’re stupid,” huffs a middle-aged woman who has slipped into Abercrombie and Fitch after getting a girlfriend to take her picture in front of the dancing devotees. She and three friends in matching tie-dyed T-shirts have come to the Plaza from Manhattan, Kansas, for a “girls’ weekend.”

“We think they should drink the Kool-Aid,” sneers a man sitting with friends outside Houston’s restaurant during a 90-minute wait for a table.

Despite the threat of jail time, the Hare Krishnas have no plans to stop their twice-weekly chants on the Plaza. Swami still holds out some hope that the security officer who declared that “Highwoods is God” will one day be less “caught up in the temporary identity of being a security guard.”