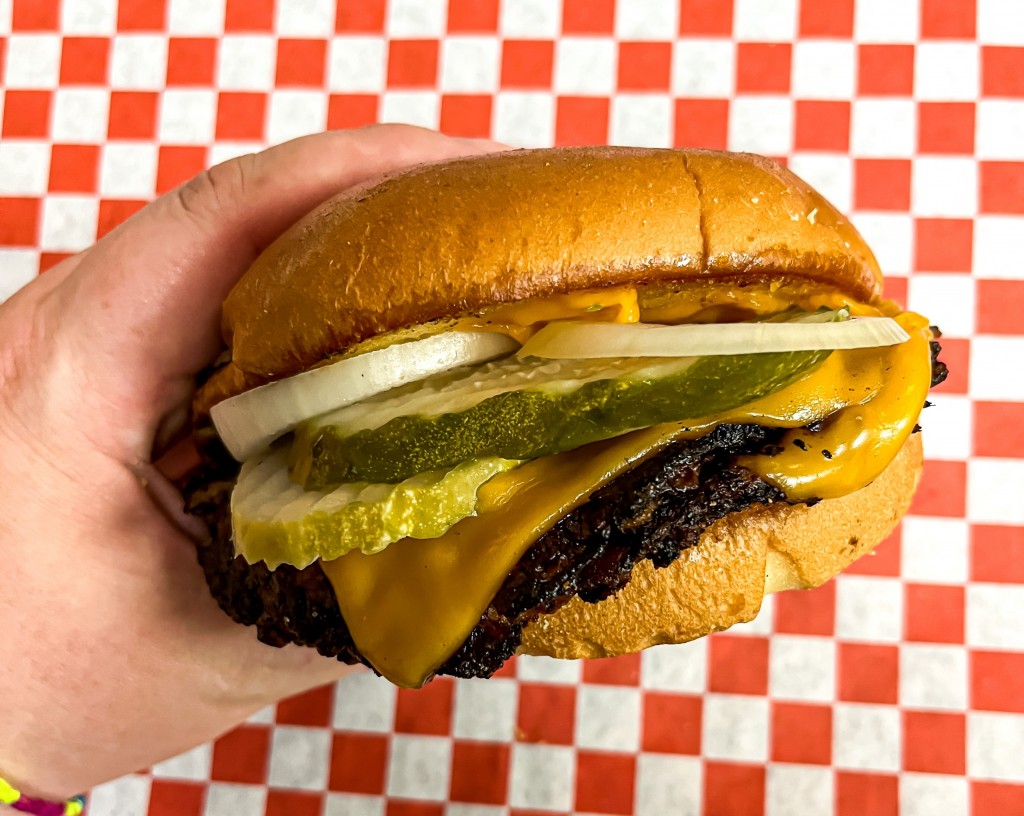 Many plant-based Kansas Citians have chowed down on a chili dog from Dead Beet Eats’ hot dog cart. Now the eatery has a permanent residence inside of Cultivar KC.

Kat Willis and Jon Terrey are the brains behind the vegan junk food concept. The duo started serving tacos out of bars such as Dodson’s in Waldo, but COVID forced them to change course on their menu offerings and their operations: thus, the hot dog cart was born. With weather permitting, the dogs could be purchased and devoured near Casual Animal in the Crossroads.

But as colder weather loomed near and a fortuitous opening appeared in Cultivar in mid-October, the team moved into a more permanent location.

Dead Beet shares a space in the back with Sweet Emotion, a dairy-free ice cream shop that’s ready to satisfy your sweet tooth after you’re done with dinner. 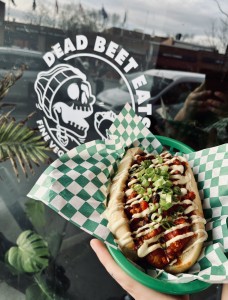 The menu features their beloved seitan-based dogs including the Hold My Beer—a dog with sauerkraut and house-made beer mustard—and the Netflix and Chili, smothered in a classic “Midwestern mom” chili inspired by Willis’ mom’s own recipe, creamy garlic sauce, and chives. I spent a solid 15 minutes pondering on how chili is the greatest food in the world after inhaling the latter.

The list of spicy and saucy hot dogs goes on, but the biggest superstar on the menu is their smash burger. A toasted bun sandwiches a double-stacked pile of melted cheese and crispy smashed Beyond Meat patties topped with onions, pickles, and a house-made burger sauce. It is a smashingly good burger (pun intended) that leaves even sworn carnivores impressed.

The team plans to make the menu full circle with their newfound space and bring back what got them started: vegan tacos.

Both recipes will use Yoli tortillas, a staple ingredient for all Dead Beet tacos that Willis uses whenever possible. They’re also both topped with Terrey’s signature smoky and spicy salsas, the beef one being topped with red salsa and the chicken one with tomatillo.

These are just the two varieties on deck at the moment, but more are likely to come. Tacos will take over the shop on Tuesdays, complete with a vegan leche cake made with condensed coconut milk, and the regular menu will be served Wednesday-Saturday.

Dead Beet Eats is open Tuesday-Saturday from 5-10 p.m. and weekly specials are announced on the eatery’s Instagram. 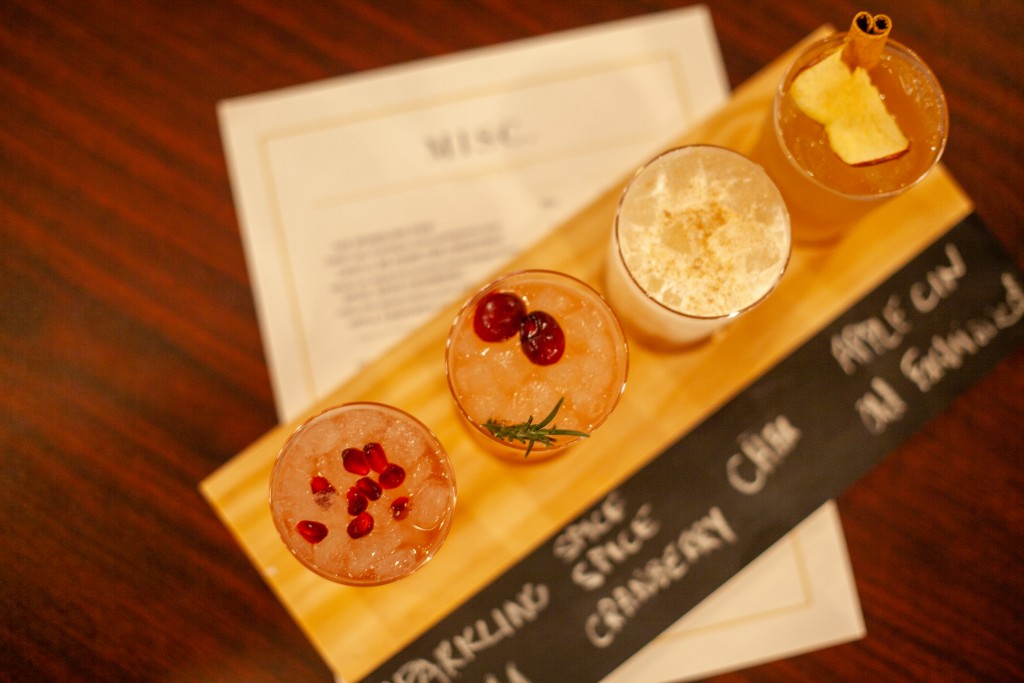 The cocktail flight at misc. // Photo by Liz Goodwin

Misc. brings Instagram to reality with its new taproom and event space

If you’ve found yourself looking for something to do on a weekend, odds are you may have turned to Brittany Burdick’s Instagram page, @kclocalevents, to point you in the right direction. The food, drink, and fun aficionado has now opened her own space called misc., a taproom and event space now open in North Kansas City.

The grand opening had plenty of equally snapshot-worthy and festive cocktails flowing. The cocktail flight allows you to sample each one.

The four concoctions included The Sparkling Pom, a gin and champagne cocktail with lemon-pomegranate syrup; The Spice, Spice Cranberry, a Moscow mule with a cranberry twist; The Apple Cinnamon Old Fashion, fit for all whiskey lovers and made with J. Reiger & Co.’s own, apple-cinnamon syrup and bitters; and, my personal favorite, the Chai’ll Be Home For Christmas with spiced rum, spiced chai tea syrup and spiced whip dream (aptly named).

Burdick and her husband, who is the master of mixology, always wanted to open their own space, and now that dream is a reality. Burdick knew once she started her Facebook clubs, which have been a hub for new Kansas Citians to connect and sample the flavors of the city, that she wanted her own space to put on her events. Once the duo heard Callsign Brewing was moving out of their space, they seized the opportunity.

Although the spot can be rented out, the term “event space” mainly refers to Burdick’s signature gatherings. Upcoming events include Holiday Cookies and Cocktails, a boozy cookie decorating class  December 22, and Holiday Movie Trivia Night December 17.

The space will shift gears weekly from regular bar hours to private events. Details can be seen on the new spot’s own Instagram page. 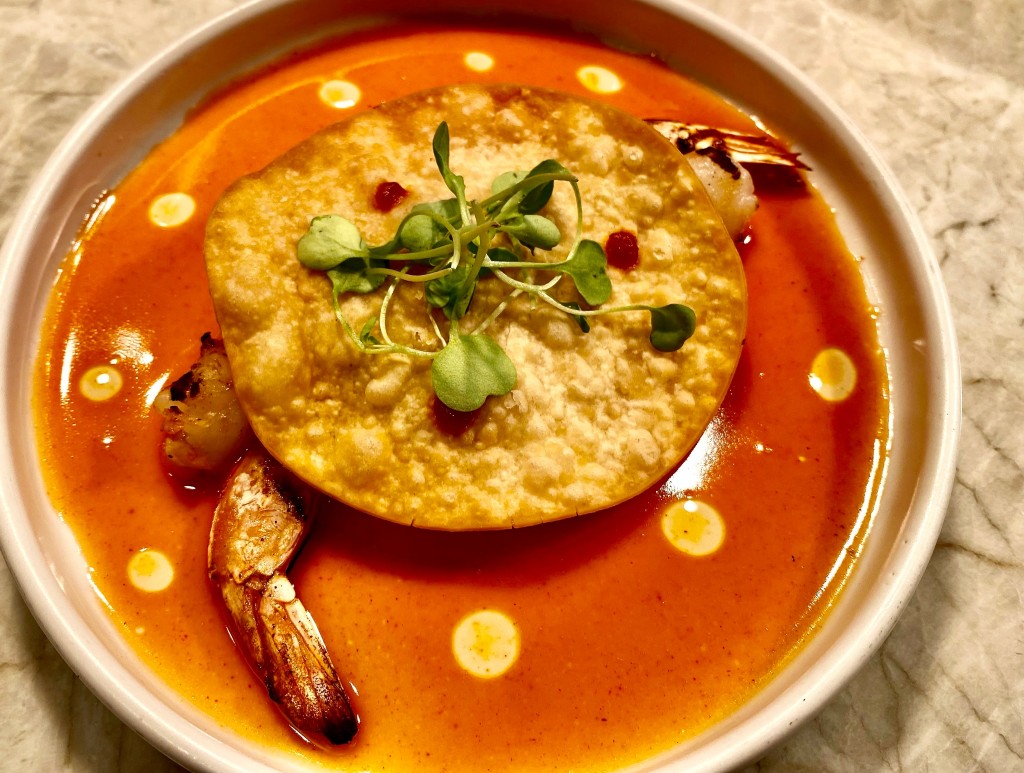 Strang Hall, a chef’s collective in Overland Park that houses six restaurants under one roof, is giving young talent some room to play with the beginning of its new dinner series.

The culinary concept kicked off on Monday with a seven-course feast by Chris Jones, the sous chef at Anousone and one of Kansas City’s up-and-coming young stars. Jones, who pulls his inspiration from his childhood memories of cooking with his sister, said it meant a lot to have the opportunity to showcase his food in a different light as to what young chefs are bringing to the table.

One of the many courses in his dinner included Shrimp Gochujang Beurre Blanc, which embodies Anousone’s popular Lao-Thai fusion cuisine.

The upcoming fine dining experiences are still being finalized, but Strang Hall expects them to be monthly affairs that will always be paired with wine and other beverages. One detail we do know is that a future guest will be Brett DeHart of Fenix and Tora Zushi.

The chef, who was the brains behind the burger voted the best in Utah in 2016, will present a five-course dinner but is still finalizing details on the menu. His event will be January 17, so keep your eyes peeled and your mouth watering. To quote Jones, Kansas City “is on the cusp of being the next food mecca of the country,” and Strang Hall is on a mission to jumpstart its national recognition.

Ticket prices will vary based on the menu, but most of them will be in the $80 range with an optional $30 drink pairing plus tax and gratuity. When the tickets are live, they will be available for purchase here.