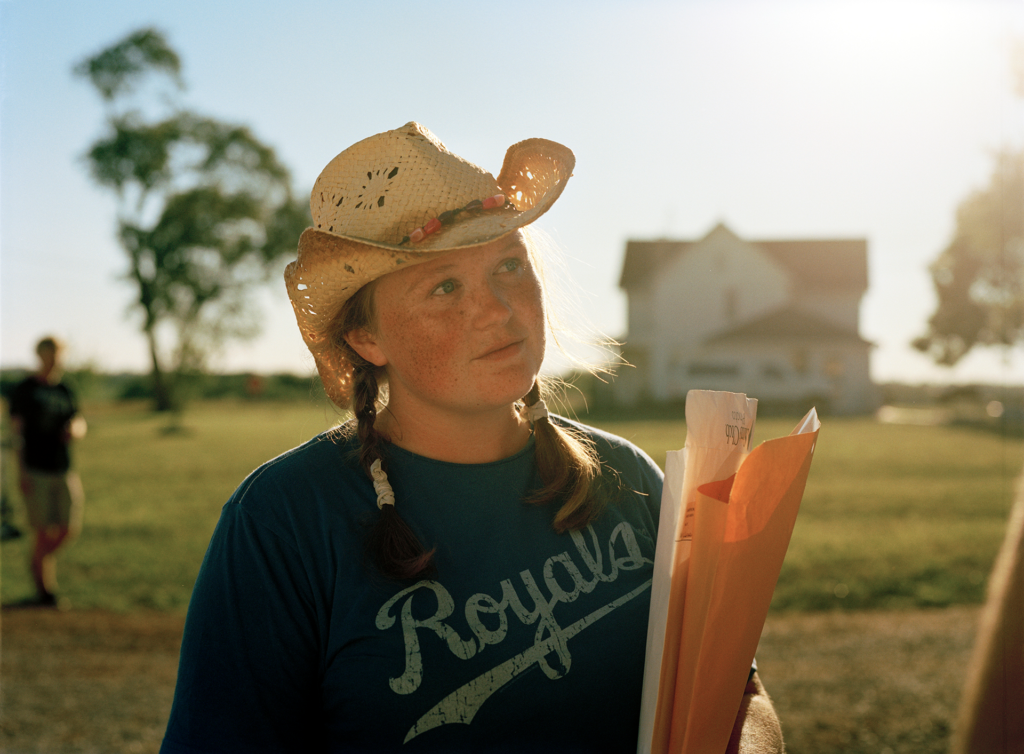 Morgan Dameron — a writer-producer-director triple threat whose Different Flowers screened at April’s KC Film Fest and opens theatrically this weekend — has already made a name for herself. Or, more precisely, she has lent her name to an intergalactic blockbuster.

J.J. Abrams named heroic pilot Poe Dameron (played by Oscar Isaac) after her in his Star Wars: The Force Awakens. Abrams, among the most well-known filmmakers in Hollywood, used to be her boss. Now she has factored her experiences working as his executive assistant into her own feature film, about a bride (Emma Bell) who bails on her wedding and joins her sister (Hope Lauren) on an impromptu road trip to see their grandmother (Shelley Long) at her farm. Stops include a certain big, big ball of twine in Cawker City, Kansas, and the “World’s Largest Goose” in Sumner, Missouri.

Like her characters, Dameron got some help from relatives for her crowd-funded movie. The filmmaker, who is in her late 20s, hired her brother, Dylan, to be her digital-imaging technician, and their sister, Natalie, was the on-set photographer. Some of her cousins play flower girls at the wedding.

Dameron spoke to me this past spring by phone from Los Angeles; this interview was first published in our April print edition. She will take questions at two screenings of her film Sunday, October 1: 5:10 p.m. at Kansas City AMC Town Center 20, and 7 p.m. at AMC Barrywoods 24.

The Pitch: What have you done in Different Flowers that we don’t usually see in road movies?

Morgan Dameron: I’ve always been a big fan of road movies and obviously was influenced by Thelma and Louise and all these great stories that take place really in the heart of America.

What I really wanted to do was twofold: One, was to tell a female-driven story, an authentic sister relationship. I really set out to portray a relationship that I don’t see on screen that often. You know, you see a lot of buddy comedies. You see a lot of two guys or brothers onscreen but seeing a complex relationship with two sisters is something that I don’t see very often, and so I set out to write something that was true to what I knew. I’ve got two sisters, so I put that into a road movie.

I also wanted to portray the Midwest, which was convenient for me because it’s what I know. But it’s also so beautiful. A lot of people think it’s a flyover state, but I think there’s something gorgeous and unique about this part of the country, so I set out to try to capture both elements of those in Different Flowers.

What should people know about the scenery here in Flyover Country?

(Laughs) I think they should know that obviously there is farmland and beautiful farmland, but that it’s breathtaking. We [the crew] were sort of staying at Kansas City, but the first time we drove out to the country, specifically in Baldwin City, Kansas, where we were filming at the farmhouse that’s in the film, they said, “Wow. The sky is so big.” I think that’s something that’s really special, especially in cinema. We’re in the widescreen format, and you get these beautiful landscapes.

Shelley Long, who produced and who’s coming to the festival, won an Emmy for playing an East Coast patrician in Cheers, but she’s actually from the Midwest.

Absolutely. She’s from Indiana, so I think there was a connection to the Midwestern story for her as well. We had some great conversations about growing up in the Midwest and how that grounds you in a way that’s really unique and special. It’s also about how the people of the Midwest have their quirks but ultimately there’s a kindness there that is often not found in harsh Hollywood.

What I was drawn to with her is that she plays a bit of an alternative Midwestern grandmother. She’s wisecracking. She always knows what to say. She does yoga. I thought that she would be able to bring her big personality to this character and really fill it out. We were able to build someone really special, a blend of grandmothers we have. Everyone stands up a little bit straighter when Shelley Long walks in a room because you know you have to be the best for her.

At the moment, you are currently best known for having been an executive assistant for J.J. Abrams. What does that title mean?

Being an executive assistant can really run the gamut. I was very lucky to be at the right hand of a really talented filmmaker and to see firsthand how a lot of these projects are developing. I got to be on set for Star Trek: Into Darkness as well as Star Wars: The Force Awakens. To get to witness from the inception of the idea all the way up through the release and the publicity surrounding the film is invaluable experience for me as a filmmaker. He’s great at surrounding himself with talented people, and that’s the best advice you could ever get: Surround yourself with people who are as good as, if not better than, you are. 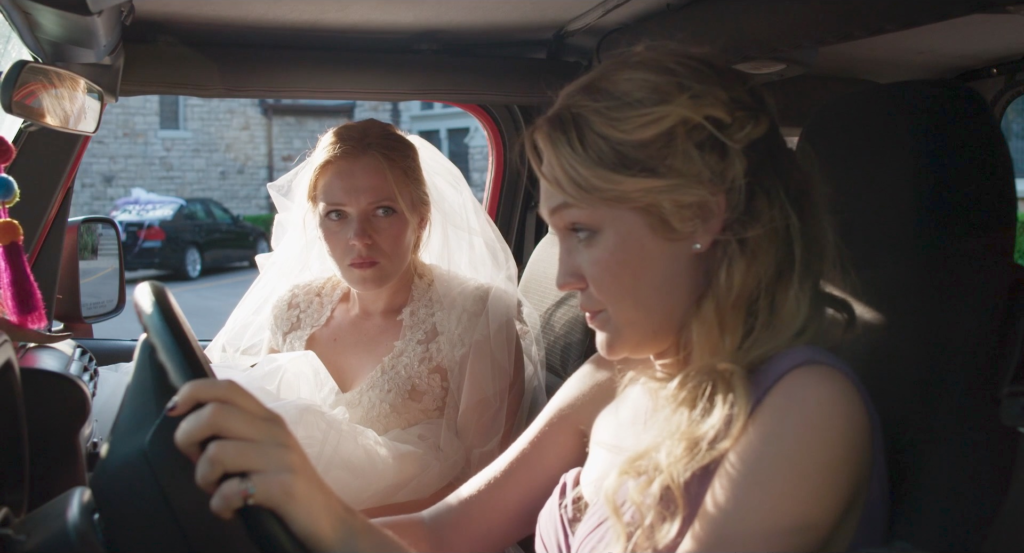 You had a successful Kickstarter campaign, but many filmmakers don’t. How were you able to get fans to donate for a movie that studios would reject because it doesn’t have enough superheroes?

That is the great thing about crowdfunding, is that you are able to find your audience so early. For us, we had over 500 people come and join us on this journey. That was what really set out to do was not just ask for donations or for money in return for rewards but to really ask people to be a part of the process, to get a behind-the-scenes look, to join this filmmaking team from the very beginning.

So we’ve tried to give people a real insider’s look at what it’s like to make an independent film. A lot of people who donate to Kickstarter are interested in filmmaking and maybe they want to do some of that of their own. That’s a goal we set out to do from the very beginning.

What did you encounter with making a film here instead of L.A. or Vancouver?

Working on a film in Kansas City was really special because people were so excited about making movies in Kansas and Missouri. With Los Angeles, even though it’s a great filmmaking hub and you access to a diverse and talented pool of people and crew members and cast, a lot of times people are a little jaded. They might be a little cynical about the filmmaking process because they see it all the time.

But in Kansas City, I’ll tell you a great story that’s an example of this: We were having a big problem finding a Jeep for our film. We were going to try to borrow one, but we needed it for pretty much the entire month we were in Kansas City. My dad set about following people down the highway.

I was thinking: You can’t do that — you’re going to get in trouble. You can’t just follow people home. But lo and behold, someone pulled up in a Jeep Wrangler at Jerry’s ARC Auto Store in the Northland. And we asked Jerry [Brockhaus] if we could borrow the Jeep for our film, and he said, “Sure. No problem.”

We were able to get a key character. The Jeep plays a character named “Albert” — the lead character Emma’s Jeep. You really wound never run into something like that anywhere else working in one of those big cities.

You’re not a stranger to KC Film Fest. What have you presented here before?

It is so special to have our homecoming back at the Kansas City Film Festival. That was a festival I used to go to as a kid growing up, when it was the Jubilee and Fred Andrews ran it. And then to be there with my college film [It Was Like That] when it was KC Film Fest and now at the new home in the Cinemark Palace on the Plaza.

I had my first kiss at the Cinemark Palace on the Plaza. It’s a really special venue for me, and I can’t believe that I’m going to screen my film there. It was a really amazing experience making my film there because of the support and talent of the community and also because it’s my home. To be able to share the film with the people of Kansas City is indescribable. I can’t wait.