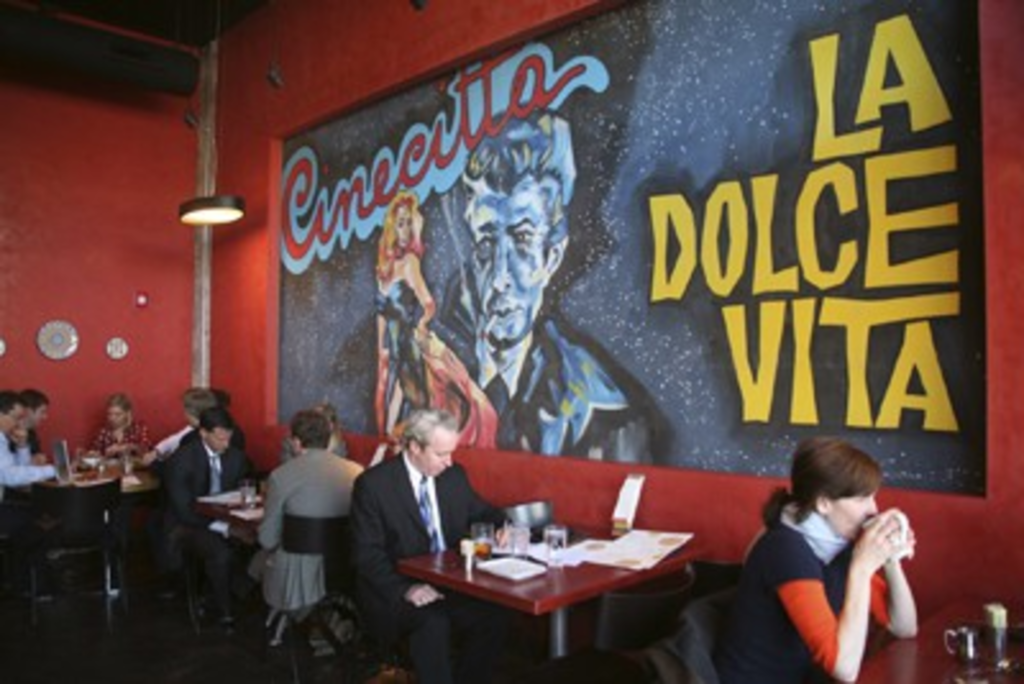 Your old virginity is like one of our French withered pears,” wrote William Shakespeare in All’s Well That Ends Well. “It looks ill, it eats dryly.”

A new virgin, it would seem, is always a much fresher metaphor for talking about food. And since there’s a new one in town, we might as well let the metaphors go wild at chef Michael Smith’s Extra Virgin.

Opened in early December 2008, Extra Virgin is the more casual bistro connected by a tiny lobby to the more upscale and serene dining room that bears Smith’s James Beard Award-winning name. The name of his new place comes from the highly desirable variety of cold-pressed olive oil. You could say that the two dining rooms are as different as firm bananas and overripe mangoes, although a friend of mine described the two venues as “being Meryl Streep on one side and Penelope Cruz on the other.”

Like the Madrid-born Ms. Cruz, the cuisine at Extra Virgin — despite any rumors to the contrary — is Spanish. Smith and his crew use Extra Virgin’s exhibition kitchen and the fragrant, oak-burning oven to create a variety of tapas and ensaladas listed on a single-page menu that’s not elaborate but is adventurous. Before I even set foot in the dining room, designed with great imagination and vitality by Eric Negrete, I had heard the place was serving braised tripe and pig’s ears. “It’s all organ food,” sniffed one acquaintance who had eaten there. “It’s too extreme for Kansas City.”

Too extreme for her, maybe. I wasn’t intimidated by the menu, although I did have to ask for definitions of several little plates because I had never tasted cabrito. At least I thought I hadn’t, until the waiter explained that the roasted cabrito at Extra Virgin is baby goat. I wish I hadn’t heard that. I once tasted an Italian version, capretta ala griglia and had the same sense of guilt that I have when eating veal or lamb — I know it’s bad karma, no matter how delicious it is.

A friend of mine who was sitting at a nearby table raved about Smith’s cabrito, which was served in a pottery crock with bits of tart apples and red cabbage. So I said a silent prayer to St. Francis of Assisi and ate it — an absolutely delicious, comforting winter dish, even if my dining companion that night, the opinionated Truman, complained that there wasn’t enough meat in the crock: “Too much cabbage, not enough kid.”

Truman is a notorious complainer, but that was one of the few times he ventured a negative word during a very long meal. He was mostly entranced by the dining room, which was dominated by a large bar that at first glance appeared to be a cage of ironwork vines and leaves.

“It’s a very sexy room,” he said between sips of a robust red wine, “with a very physically attractive staff.”

Its small-plate menu, however, may be awkward for dining companions who don’t have the same culinary tastes. Truman wanted the roasted marrow bones while I preferred the thick slices of grilled bread, brushed with olive oil, and a bowl of creamy house-made ricotta. So we ordered both and didn’t share.

It turned out that Truman wasn’t so crazy about the bones. “They give you this little medical tool for pulling out the marrow,” he whispered, “but there’s not much marrow to be getting.” Those bones weren’t cheap, either, so I took them home, and my dogs adored them the next day.

I had absolutely no complaints about the duck confit, served on grilled crostini with walnuts and grapes. And I loved the flaky little empanadas stuffed with seasoned pork and chopped plantains. That night’s great discovery on the cold tapas list was sliced grilled eggplant, served chilled with bits of salty feta and a terrific cumin vinaigrette.

The following week, my friend John and I were out driving around on a bitterly cold Saturday afternoon, when we passed the welcoming windows of Extra Virgin at 5 p.m. and could see that the staff was setting up for dinner. “Oh, can we please stop in for a snack?” he asked. “I need a dose of urban sophistication.”

This “snack” turned into a long, leisurely dinner, one in which we discovered that the best spot for people-watching was at the bar, sitting at the back, near the mural inspired by the La Dolce Vita poster.

At first there was nobody to see because we were the only customers. John loved that — he could sip wine and chat with the staff, including the smart, funny bartender Justin, an invaluable guide when it came to ordering some of the more unique offerings on the menu. Like the braised pork cheeks or the crispy pig’s ear salad.

I’d imagined that salad as a pile of greens with two deep-fried pork ears plopped in the center. Instead, we were served a pretty mound of spicy arugula topped with curls of golden crisps — they looked like fried calamari. The pig’s ears were, in John’s words, “crunchy, chewy, gritty, fattening — and delicious.” I couldn’t have said it better myself. I also liked the hearty pork cheeks served with white beans in a supple, addictive broth.

That night’s special was venison tortellini, another lovely surprise: fat pasta pillows filled with chopped venison (not too gamey) braised in prosciutto butter and chicken livers. The sauce was so delectably rich that I asked for more grilled bread to sop it all up.

A good, tart counterpoint to all that rich meat was the sexy little salad of sliced fresh oranges and shaved fennel. “There are so many different flavors and textures,” John said. “I’m overwhelmed.”

I thought I was too overwhelmed for dessert. At the moment, there are only three choices on the dolce menu, none of them chocolate. John insisted on the crema Catalana, served here like a traditional crème brûlée — a silky citrus-infused custard with a brittle amber crust. By the time it arrived, he was busy gawking at the dining room’s new arrivals. When a distinguished-looking gentleman walked in wearing a velveteen jacket, John whispered loudly, “Who’s that old queen?”

I’m sure there’s a Shakespeare quote that would have been a witty riposte, but I was too busy eating John’s crema Catalana to think of it.