Deluxe burgers are still the real thing in Nevada, Missouri 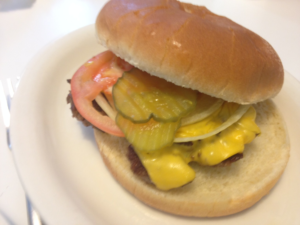 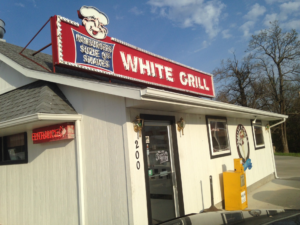 Everyone knows what a deluxe hamburger is, right? Or the correct components of a hamburger platter?

In this day of “artisan” hamburgers — and I use the term with some disdain — those old diner terms like deluxe burgers or a burger plate have taken on new meanings or maybe have no meaning at all.

Traditionally, a deluxe burger means that the burger is topped, right before serving with a raw onion slice, a slice of tomato, pickles and iceberg lettuce. It cost more than a non-deluxe burger. But it’s not “artisan” either.

%{[ data-embed-type=”image” data-embed-id=”” data-embed-element=”aside” contenteditable=”false” ]}%
There are restaurants like Dempsey’s Burger Pub in Westport that serve hormone and antibiotic-free beef patties that automatically include locally-grown tomatoes, butter lettuce, onion and house-made pickles on the most basic sandwich, the House Burger, sold in the place.

At the three venerable Town Topic restaurants (1900 Baltimore, 2021 Broadway, and 6018 Johnson Drive in Mission), no burger is served plain — unless requested — they’re topped with ketchup, mustard, grilled onion and pickle. Fries. tots or onion rings cost extra; those are the additions that once qualified as a plate or platter. If you want a slice of tomato or lettuce with a Town Topic burger, it’s 25 cents extra. Each.

While driving through the hamlet of Nevada, Missouri last week, I had a chance to pay homage to the 78-year-old White Grill, which claims to have invented the curly “Suzie Q french fry.” (There are several restaurants that have also made this claim, including the now-defunct Delores Steakhouse in Oklahoma City).

The White Grill — no one working in the restaurant while I was there had a clue as to where the name White Grill came from — was opened in 1938 by “Red” McLaughlin in 1938 (he later expanded to other cities, including Fort Scott, Chanute, Iola, and Pittsburg, Kansas; the Nevada is the last operation left). The diner, which serves breakfast, lunch and dinner, was purchased by two sisters, Diane Wessley and Linda Gower, in 1997; their parents had purchased an interest in the White Grill in the 1960s.

The restaurant looks very much like a Town Topic (a few tables, a long counter facing the kitchen) and sells both diner dishes and barbeque.  A double cheeseburger costs $5.35. A double cheeseburger plate — which most customers prefer to be on toast — includes a slice of tomato, raw onion, pickle, cottage cheese and Suzie Qs. It sells for $7.50.

You can order tots, onion rings, or regular fries at White Grill, but our server told me that hardly anyone does. When the name “Suzie Q” is illuminated in neon on top of the building, you instinctively know what to do.