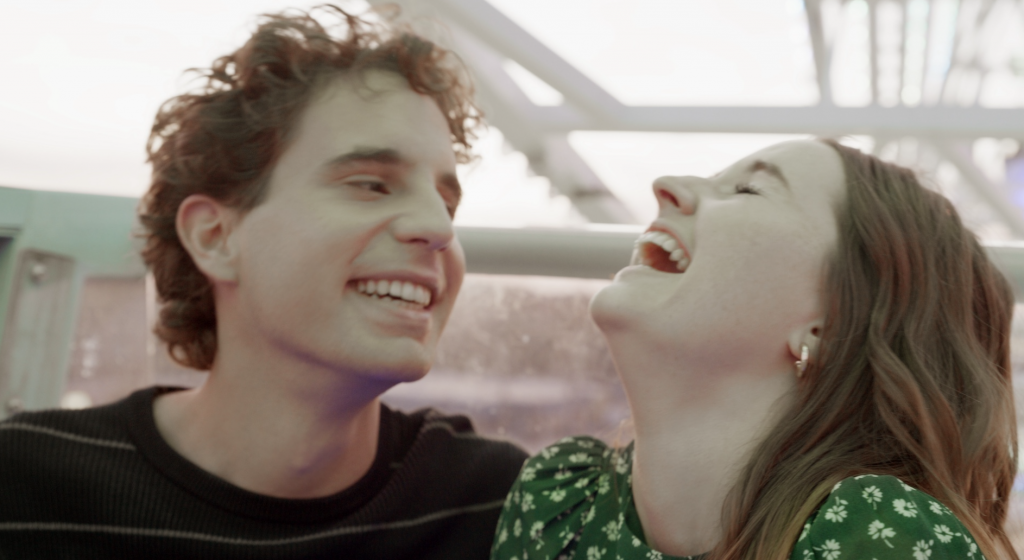 Dear Evan Hansen is a new feature film, based on the stage musical of same name that stormed Broadway in the mid-aughts, and that came through KC on tour in 2019. The staged version was complicated, a bit cartoonish, and certainly a letdown based on the subject matter it hoped to tackle. The film adaptation is actively harmful to the same issues that the live version was merely mishandling.

Evan (Ben Platt) is a high school student who is depressed. His arm is in a cast from when he fell out of a tree. [He did not “fall” so much as took a swan-dive in a suicide attempt that didn’t do the math right.] His therapist asked him to start writing daily letters to himself, in the third person, to self-explain his inner turmoil, hopes, and dreams. A bully named Connor (Colton Ryan) steals a printed copy of Evan’s daily letter and pockets it.

Later, Connor commits suicide, with Evan’s letter in his pocket. Connor’s family reads it as the sort of message between best friends, and turns to Evan [def. not Connor’s actual friend] to help learn more about their complicated dead son and why he did what he did.

Rather than admit to the truth, Evan attempts to help Connor’s family heal through a series of ever elaborating lies and faked emails. What begins as an interpersonal series of faux exchanges spirals into a city-wide, and then nationally viral, celebrations of the imagined version of Connor and of the inspiring friendship he shared with Evan.

On every level, this is a disappointment. On a few levels, it extends further, into being outright cruelty to every subject it intends to normalize or support. Wherever Dear Evan Hansen thinks it will supersede entertainment into the sphere of providing social good, it does actual harm. Dear Evan Hansen is being universally recognized as a bad movie. I posit that Dear Evan Hansen is, ethically and morally, actually bad. Its very existence a detriment.

What earns such outright ire? Let’s start with the baseline.

Dear Evan Hansen is a lunacy-inducing watch. Platt as a 27-year-old actor portraying a teenager in a high school world filled with actual teenagers comes off like a Fred Armisen sketch gone frustratingly awry. No compliments are done to Platt (who originated the character on Broadway) by a cinematic gaze that zooms tightly on him under lighting that elicits a feral repulsion—no favors were done to him anywhere from make-up to lighting to costumes.

He’s very clearly an adult man who thinks that adopting a submissive posture will make him appear more than a decade younger. It would be hilarious, t’were it not a goddamned horrorshow. It plays like a Tim & Eric level extended sketch where you’re depending on the audience accepting the otherworldliness of the disconnect to carry whatever happens next. This ain’t it.

Dear Evan Hansen wants you to accept (and celebrate) it as a serious artistic effort. And it can go fuck itself.

This is a good time to insert our film editor, Abby Olcese’s, review of the film, comparing it to the clinically horrific thriller cinema of Michael Haneke: READ HERE

I do know what you might be hearing in the back of your head: “Brock, almost every musical is just pure cringe. The studio-produced versions even so. Yes, the main character is embarrassingly/distractingly old, but you’re overreacting to what should just be a bad film we laugh at.”

Drew Barrymore is currently interviewing the cast of “Dear Evan Hansen” as her character from “Never Been Kissed” and I promise you it’s the most unhinged thing you’ll see this week pic.twitter.com/RKuLzQQkl3

First, no one will go to the mattresses for an awful musical harder than me. The film adaptations of off-Broadway shit that I would put my name on? Boy, it would embarrass you from a distance. I know what the medium is and how much I will defend it.

Dear Evan Hansen is about someone who stumbles into a situation where lying would make some people feel better. And, by extension, make him well-liked. This opportunity can fall to so many teenagers, in different ways. Turning it away is difficult. I know, because in my own specific way, I welcomed it. In welcoming it, you set a standard that—for the rest of your life—you’ll not only accept similar opportunities of the situation but create them. To the detriment of others.

Anywhere where society might find a combination of both pity and rock-star celebration, there will always be an unmiraculous white dude ready to step into that limelight.

In many ways, musicals like Pippen find similar ground here. Or at least acknowledge that the characters question whether or not they’re in that situation. You know: a smol amount of awareness.

Dear Evan Hansen does a wonderful pretending of an awareness reckoning, that offers none of what the actual situation parallels, nor what should be taken from it. It’s the 2021 version of everything that fell short in the “It Gets Better” campaign.

What does Dear Evan Hansen want us to think or believe? It instills an idea that you can suck everything out of marginalized people, people fighting mental health issues, children… in general, and says that you can claim that rock-star status but still be someone worthy of celebration. And that you can still be the victim. And the hero. And that even the consequences for your choices can be, in actuality, further self-celebrations.

It’s certainly cringy to watch these emotions come out of the characters on screen, as their situations spiral ever further into some bizarre morality play without the morals—it’s another to consider what the implications are regarding the people behind this.

Also, the songs suck shit. Except for “Sincerely, Me” which is a delightful comedic romp about a much better premise/execution for the entire show. It’s almost angering in how it shows clearly how much different/better this whole thing could have been.

The movie is bad. The songs are bad. The acting is very bad. Even for a musical, it is hypnotically bewildering to observe this world. This is like viewing an alien planet, if all the aliens on that planet were kinda shit at everything they do.

Dear Evan Hansen is bad. It is not a fun bad. It is actually bad. I cannot insist highly enough that you do not give it your dime, or a moment of your time.