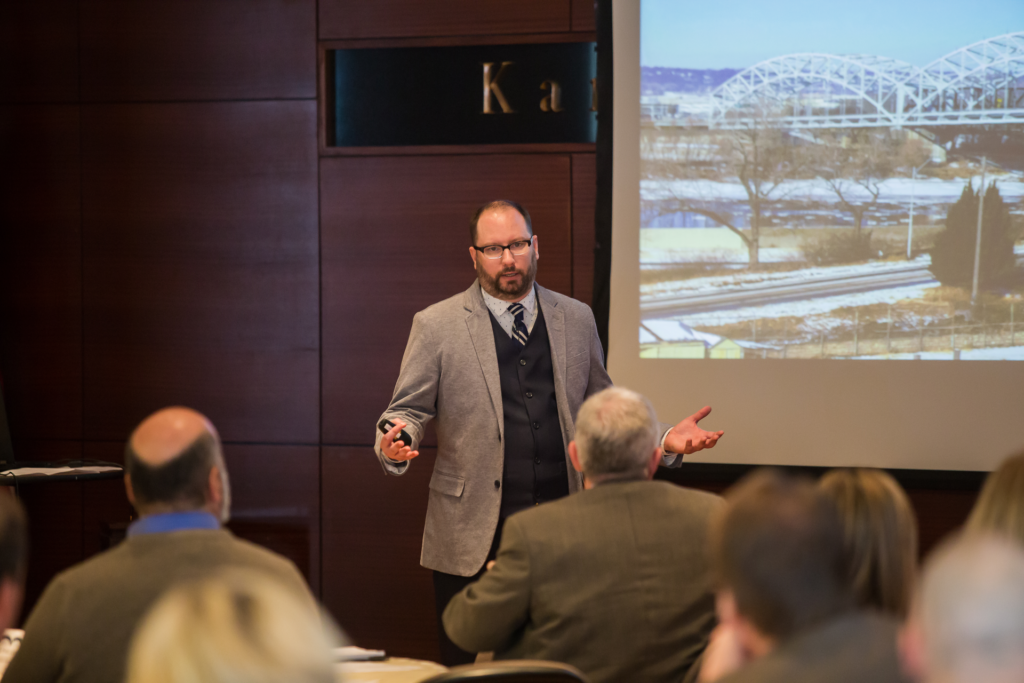 What I do (in 140 characters or less): I try to help governments better listen to the people they serve, improve their processes, innovate where they can and tell their story.

What’s your addiction? Buying midcentury furniture and lighting fixtures that I think are supercool but ultimately have no place for. It is ridiculous.

What’s your game? Responding way too much to Twitter trolls. I’m like a dog with a bone.

What’s your drink? Whiskey, neat. Lately, I’ve been enjoying Sons of Erin Irish whiskey put out by Restless Spirits in North KC. Worth a try if you haven’t.

Where’s dinner? Well, my new favorite was Freshwater, which was recently destroyed when it failed to yield to an oncoming car. Lots of tragedy in the accident. Rooting for [owner] Calvin Davis and his restaurant to come back even better. Great staff, perfect wines, and exciting food.

What’s on your KC postcard? When I worked for Congressman Cleaver, there was a moment in the KCUR studios when he got down on his bad knee so Walt Bodine — then mostly blind — could feel his face and say hello. Maybe not a typical postcard, but an image about as Kansas City as it gets.

Finish these sentences: “Kansas City got it right when …” We remembered we are a great city. Encouraged by the exceptional Mayor James, we’ve turned a corner and now seem to get far more right than we get wrong.

“Kansas City screwed up when …” We went all in on mega highways at the expense of neighborhoods, streetcars and people. We weren’t the only city who did it, but, man, we did it with gusto.

“Kansas City needs …” To not get scared and not turn back. After a surge of progress, there is a tendency to return to the basics. I hope we don’t.

“As a kid, I wanted to be …” A marine biologist or an astronaut. I am neither of those things.

“In five years, I’ll be …” Taking transit across a brand-new Broadway/O’Neil Bridge to catch a flight from a brand-new KCI. I am hoping we can embrace these generational projects to take another step toward being an even better Kansas City.

“I always laugh at …” The outtakes at the end of movies. Why can’t the movies themselves be that funny?

“I can’t stop listening to …” Currently on the turntable stack are Stevie Wonder (Talking Book), Fleetwood Mac (self-titled), A Tribe Called Quest (People’s Instinctive Travels and the Paths of Rhythm), Leonard Cohen (You Want It Darker).

“My dream concert lineup is …” I think the lineup mentioned above would do the trick. Sadly, both Phife Dawg from Tribe and Cohen died last year, but still a solid lineup.

What’s your hidden talent? Pen-spinning from my formative days as a high school debate nerd.

What’s your guiltiest pleasure? An abnormal affection for alliteration. I come by it honestly. My old boss, Rep. Cleaver, carries a torn-up, dog-eared thesaurus. It rubbed off.

The best advice I ever got: Things are generally made better with more light, less heat.

My sidekick? My dog, Scout, has been through thick and thin with me.

What is your spirit animal? The raccoon that sleeps on my porch every night. Pudgy, comfy and deceptively clever.

Who is your hero? I’ve met and worked for some very admirable people in my life, but my hero is my dad.

Who (or what) is your nemesis? The guy that runs an illegal dog-sitting business out of his house next door. Seriously, that guy.

What’s your greatest struggle right now? Assembling IKEA cabinets for a kitchen remodel. So many parts!

My dating triumph/tragedy: Some of each

My brush with fame: Worked the Clinton campaign and got to hang with Bill for a day as he crisscrossed a bunch of tiny towns in North Carolina. It was hot and muggy, but the man was dressed to the nines, full suit. When asked, he said, “This may be the only time some of these folks will ever see a president visit. I should look the part.”

My soapbox: Having worked for her, don’t get me started on the sexism and misogyny that in the end kept us from having our first female president.

What was the last thing you had to apologize for? This questionnaire not being nearly as funny as it should be.

Who’s sorry now? You may be for making it this far in this thing.

My recent triumph: Kansas City was just named a 2017 All-American City due in large part to its Turn the Page program that works to improve the reading skills of our youngest residents. I am pretty proud to say I was there in the mayor’s office when that idea was born.