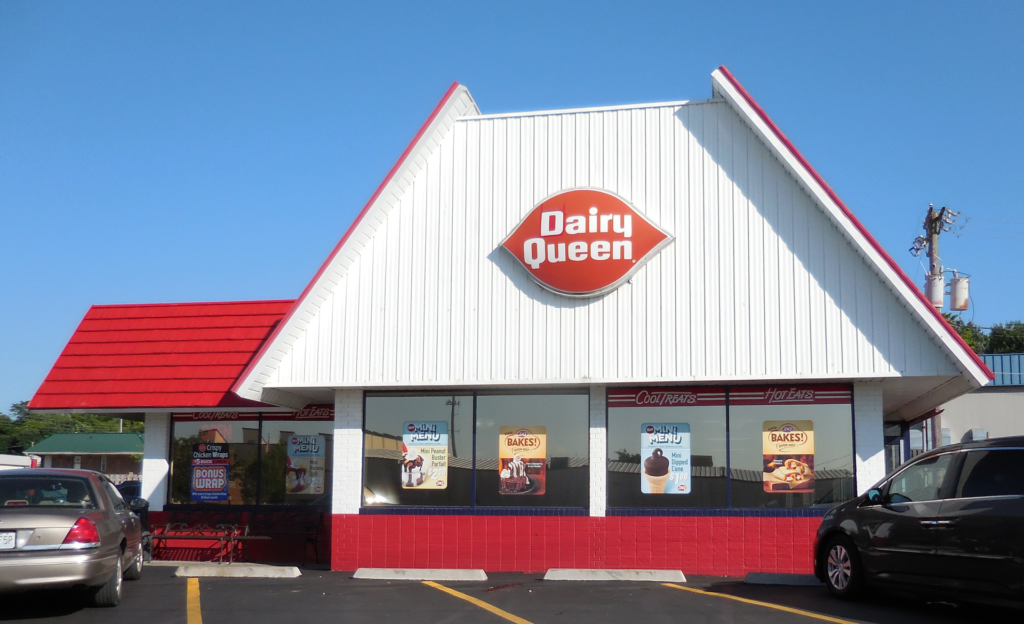 By the early 1950s, there were five DQ stores in the Kansas City metro. Of that original five, only one is still standing: the beloved building at 2535 Independence Avenue, which opened July 4, 1952 (and was owned and operated by John and Esther Saladino McMurray from 1980 to 2011). Brett Williams briefly ran it for several years as an ice-cream shop and pizzeria that he called the Dairy Barn. The building stands vacant today.

Another early Dairy Queen was at 434 West 85th Street, in Waldo, which closed in 2012 after decades of serving families in that area. The freestanding Dairy Queen at 315 Southwest Boulevard in Kansas City, Kansas, was closed several years ago (and is now a Subway sandwich shop).

So where can you still buy a Dilly Bar or a dipped cone today in Kansas City?

It’s not that hard, actually.

Though many of the old-style Dairy Queen stores are gone now, Lee’s Summit has one at 400 Southeast Douglas that dates back to the mid-1950s. Kansas City also has many more of the recently constructed franchise operations — the new DQ Grill & Chill concept, which was introduced in America in 2001. The Grill & Chill restaurants offer an expanded menu (including breakfast, burgers and grilled sandwiches) with limited table service; customers still place orders at the counter. And most contain self-serve soft-drink fountains. Many older DQ locations, including the 50-year-old Lee’s Summit venue, have been renovated to become DQ Grill & Chill restaurants.

Other DQ Grill & Chill locations in the metro include 13525 College Boulevard, in Lenexa; 1900 Southwest State Route 7, in Blue Springs; and 615 Armour Road, in North Kansas City.

The Lee’s Summit store on Sam Walton Lane is located inside a Wal-Mart store, a new fast-food concept that was introduced several years ago: 500-foot stores — selling only ice-cream treats and beverages — within, at the moment, only a handful of existing Wal-Mart stores. There are two in the Kansas City area, the other is the Blue Springs Walmart at 1900 State Route 7.

Oh, and on the subject of historic DQ buildings, is the original Dairy Queen restaurant in Joliet, Illinois, still standing after 75 years?

“No,” says DQ publicist Kate Gallagher. “But there’s a sign on the building that replaced it saying that the first Dairy Queen used to be there.”

Keeping up with the Squirrel Nut Zippers is timeless