Daily Briefs: Have You Slapped a Superdelegate Today? Plus: Kernel Kobb’s Divisive Politics

Mark Russell would sing this to the tune of Camptown Ladies: Missouri Rep. William Lacy Clay is a supporter of presidential candidate Sen. Barry Obama, so if you were expecting him to say anything nice about the wife of the former “first black president,” you are very confused but sexy, like Amy Winehouse, and also in for a giant shock: “If you have any, any kind of loyalty to the Democratic Party,” says Clay to Hillary Clinton, “perhaps you need to rethink your strategy and bow out gracefully in order to save this party from a disastrous end in November.”

Even The Kansas City Star‘s Steve Kraske is openly calling for undecided superdelegates to pick sides, and he’s doing it with the grammatically correct pronouns and formal modes of address you would expect from a man whose parents’ car bumper still boasts about their Honor Roll Student: “So Mr. and Mrs. Undecided Superdelegate, whom do you back for president?” he asks, adorably, serving as an example to those of us who use harsh language and ignore the who/whom distinction as a general rule.

It’s tough out there for a cartoon mascot: KMBC Channel 9 says that some national right-to-life organizations are urging Johnson County District Attorney Phill Kline to run for re-election. Kline’s record as the JoCo D.A. doesn’t lend itself to a lot of feel-good campaign spots, no matter how you rearrange it. I even tried creating campaign literature that replaced unlovable old bureaucrat Phill Kline with Kernel Kobb, an adorable cartoon cob of corn who owns a Southern plantation, and the results were mixed at best. You can check my math: 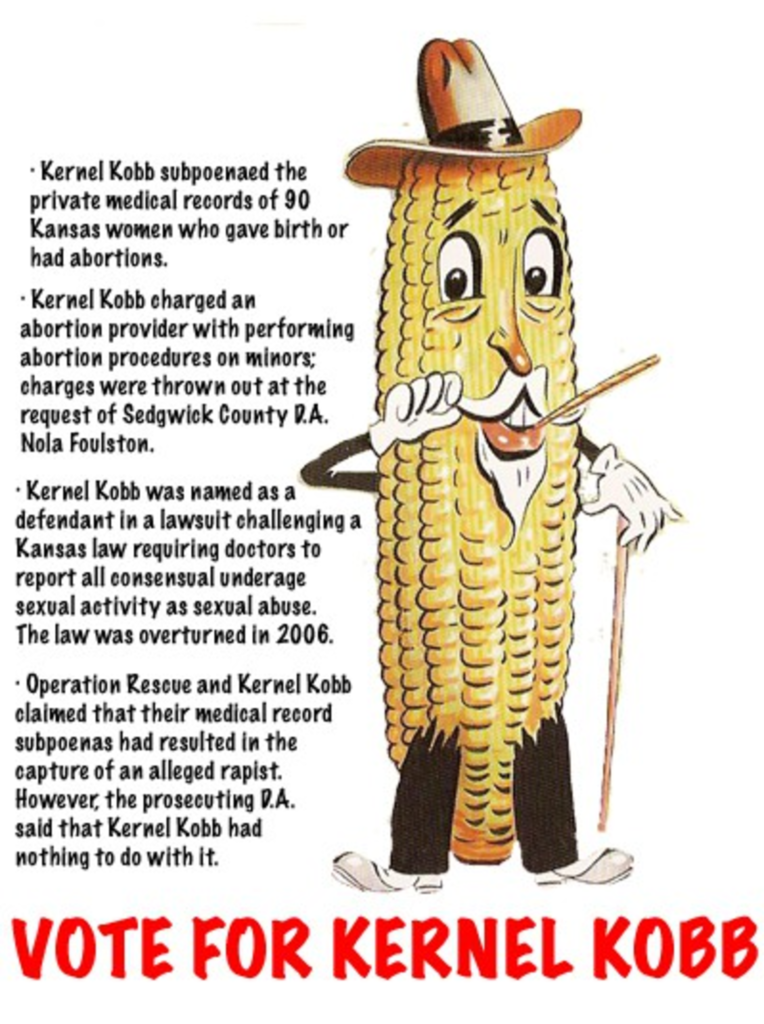 Yep. It all looks pretty bad for Kernel Kobb, but at least he’ll be able to command some high, or at least mid-range speaking fees.

You guys, sex is a big responsibility: Y’know, you don’t have to have sex to be “cool.” Just ask uncool Jaleel White. Contents under pressure, you guys! Jesus, listening to this was a mistake because it has been playing in my head for the last hour. Please also consider not doing drugs, not drinking, not not going to school and also please don’t huff WD-40 fumes. I’ll try to find awesome celebrity raps about those subjects later in the week.