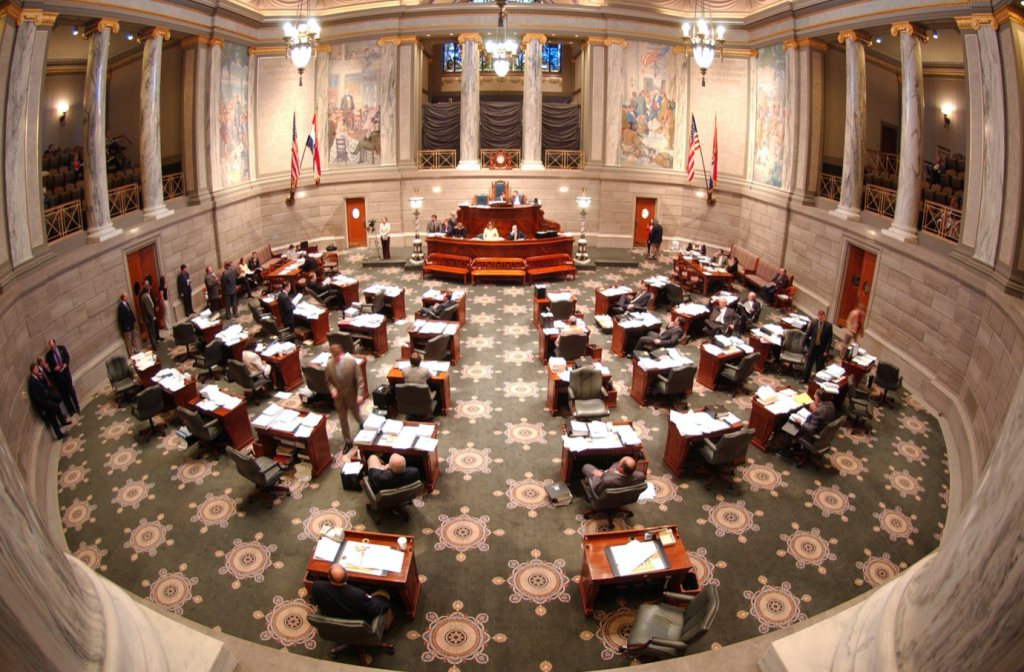 COVID-19 cases among members and staff of the Missouri Senate will force it to postpone consideration of an emergency spending bill and pandemic liability protection, Senate Majority Leader Caleb Rowden announced via tweet Monday.

The news was followed a few hours later by Missouri House leaders announcing the annual freshman tour of state government-funded programs, operations and facilities, given as part of new lawmaker orientation, was being postponed indefinitely.

The Senate had been scheduled to meet Tuesday and planned to hold hearings this week on both bills under consideration in the session that opened Nov. 5.

Now, no action will be taken until the first week of December, Rowden tweeted.

“Due to a number of positive COVID-19 cases among members and staff, the Missouri Senate will postpone action related to the special session until after the Thanksgiving holiday,” Rowden wrote. “This decision was not made lightly and, although disruptive, is in the best interest of protecting members, staff, and the public.”

Due to a number of positive COVID-19 cases among members and staff, the Missouri Senate will postpone action related to the special session until after the Thanksgiving holiday. 1/2 #MOLeg

Rowden was not immediately available for comment on his announcement. Other members of the Senate Republican Caucus also did not respond immediately to text and voice messages sent by The Independent.

Senate Minority Leader John Rizzo, D-Kansas City, said he first heard of a possible outbreak among Republican members over the weekend and has been in contact with Rowden as the situation developed.

“I definitely knew at that point it would probably throw this week’s planned events into flux,” Rizzo said.

Republican members of the Senate were together last week in Branson for a caucus and retreat. They met with Gov. Mike Parson and photos from that meeting show few, if any, members wearing masks.

Met with the Senate Republican Caucus this morning to share my vision for the next legislative session.

We will continue to focus on workforce development, infrastructure, combatting COVID-19, economic recovery, and public safety. We are working to move #MissouriForward! pic.twitter.com/f557cvHgvI

Democratic Senators were scheduled to have an orientation meeting with new members this week and those have been postponed to December, Rizzo said.

There are more than 50 new members who will take seats in January in the 163-member Missouri House. The bus tour is offered in addition to orientation in the Capitol building, and be rescheduled some time next year, House Majority Leader Rob Vescovo, R-Arnold, said in a news release.

The three days of orientation in Jefferson City will continue as scheduled, Vescovo said.

“I am committed to ensuring our new members will be able to benefit from this incredible educational experience at a future date when we can conduct the tour in a safe and responsible fashion that doesn’t risk further spread of COVID-19,” he said.

The coronavirus that causes COVID-19 is spreading rapidly in the state, with 60,010 cases reported so far this month, more than any other full month since the virus was first identified in the state in March. The Missouri Hospital Association on Friday sent Parson a letter pleading for a mask mandate and warning their ability to treat patients is being overwhelmed by the rapid rise in sickness.

Parson, who has said it is up to Missourians to take personal responsibility for avoiding the virus, was diagnosed with an infection in September, forcing postponement of an election debate.

The Missouri House has already passed the $1.3 billion spending bill sought by Parson that would provide $752 million in new spending authority for federal CARES Act funding, $18.7 million for local agencies working to prevent homelessness, and $96 million in child support payments.

There are no rules requiring legislators or staff to wear masks while on the floor, in offices or in committee hearings. Visitors to the Capitol building are given temperature screenings but no masks are required.

That should change, Rizzo said.

“We still struggle with senators who blatantly refuse to wear masks on the floor, in committee hearings and in close proximity to each other,” Rizzo said. “I don’t understand why people are so averse to science.”

The child support funds come from money intercepted from federal stimulus payments, unemployment supplements and tax refunds. With the postponement, some families may be left waiting for money until the emergency spending bill is passed.

Payment were still going on as of Nov. 9 but the creative accounting used to deliver them will be exhausted by the end of the month, state Budget Director Dan Haug told the House Budget Committee that day.

“We can’t send it out to the custodial parents until we get this authority,” Haug said.

The COVID outbreak in the Senate has also caused the cancellation of a hearing scheduled for Thursday of the legislature’s Joint Committee on Child Abuse and Neglect.