Theater review: Class, sex, and spaghetti in the KCAT’s Skylight 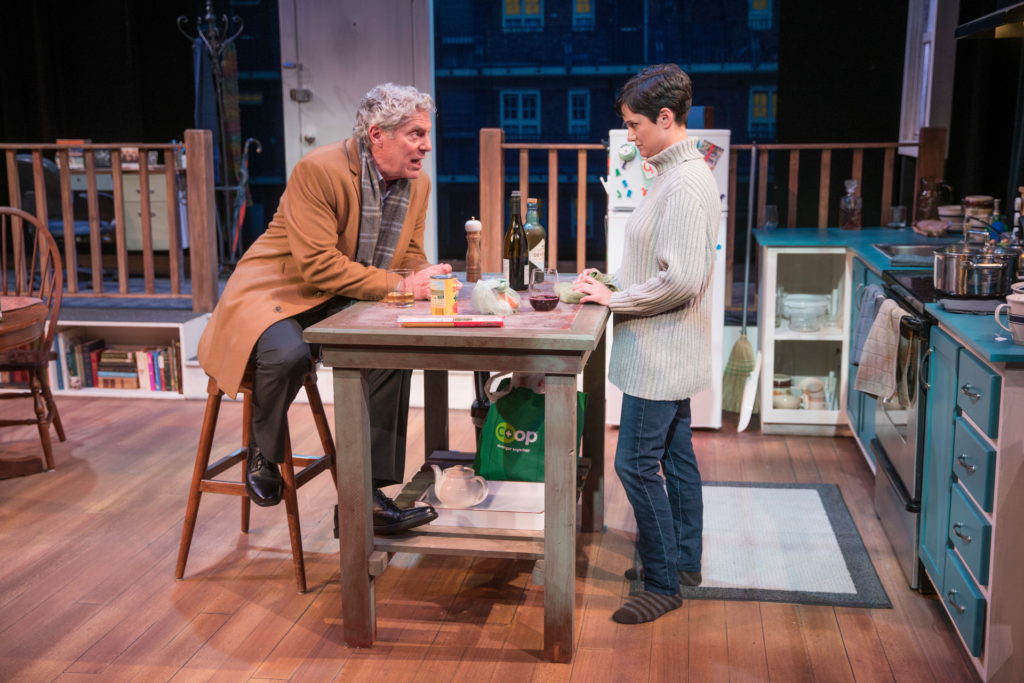 The political has never seemed so personal in Skylight, a 1995 play by David Hare that feels like it could have been written yesterday.

The action unfolds over the course of a single day in the apartment of Kyra Hollis (Katie Karel), a 30-something math teacher working with underprivileged kids in East Ham. Kyra’s spent the past few years performing penance for a long-term affair with Tom Sergeant (John Rensenhouse), an older, wealthy restaurateur. New Kyra lives alone, eschews luxuries (like a functioning heater), and takes being spat on at work in stride. But when Tom drops by unannounced after his wife’s death, New Kyra is tested by the ghost of her old life.

The Kansas City Actors Theatre’s production lends the script fresh vigor thanks to its taut direction (courtesy of Darren Sextro) and the talent of its two leads. Much of the play is an exercise in competitive monologuing, as Kyra and Tom try to relitigate their relationship in the way that paints each of them in the best light. For all that speechifying, the momentum never stalls: Sextro maps the rhythm of Hare’s lines to his blocking, creating tidal ebbs and flows of power on stage.

It helps that Karel and Rensenhouse have chemistry in the most literal sense of the word. The two react to each other like unstable elements, attracting and repelling in turn. More crucially, they make us believe that these two people could love each other despite the obvious gulfs between their ages, their politics, their backgrounds, and ambitions.

Rensenhouse is always a joy to see perform, but he’s especially effective stuffed into Tom’s straight-laced, self-pitying shoes. Here, the actor tamps down his Shakespearean attack to show us a pot simmering just below boil. His Tom is calculating and careful, trying new tactics to win Kyra over only to retreat, when challenged, into his old, noxious habits. 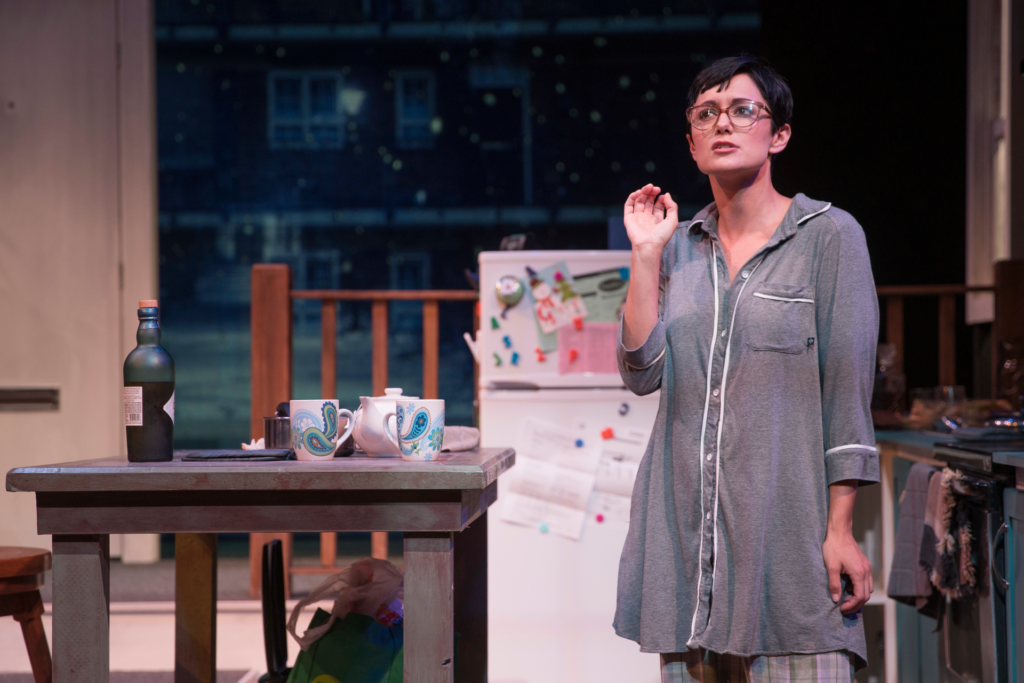 Karel is strong, too, though she goes to the “defensive sarcasm” well a bit too often. As the real purpose for Tom’s visit unspools, Karel relaxes into the part — and into the one power Kyra’s always had over her lover. The results are electric. As the two spar, Tom becomes increasingly incensed by her self-control and self-possession — qualities Karel unequivocally embodies. “What is it in you?” he seethes. “This thing that you have. Why doesn’t it yield?”

KCAT’s design is restrained but effective. Throughout the play, projections function as a sort of emotional soundtrack, underscoring key moments with relevant images (they’re a bit hokey, but infrequent enough to not be a distraction). Jonathan Robertson’s sound design ramps up the realism with subtle effects, and Kylor Greene’s lights do a lot of heavy lifting to capture mood and time of day.

Set designer Bret Engle provides an ideal battleground in the form of Kyra’s white-bread north-London apartment. The dated, mismatched furniture slyly evokes a woman without the wallet or will to coordinate decor. More impressively, the kitchen is fully plumbed: the script requires Kyra to prepare and cook a spaghetti dinner over the course of a scene. That meal provides more than just theatrical smell-o-vision. Dinner is just another battle in Kyra and Tom’s war of wills. Kyra refuses to defer to Tom’s restaurant experience, telling him she prefers to make it her way (this victory is punctured slightly by the agony of watching Karel saw at bits of onion with a blunt prop knife). Tom bemoans her needless obstinance as he contemplates a tragic hunk of waxy cheese.

The script isn’t flawless. Skylight is a two-hander with training wheels — Kyra and Tom’s clash is bookended by pleasant but superfluous scenes with Tom’s teenage son, Edward (Charlie Spillers). And while well-written, a few of Kyra and Tom’s speeches hit the same emotional notes, lengthening the play for questionable payoff.

But there’s a reason Skylight won the 1995 Olivier Award for best play (and the 2015 Tony for Best Revival). Hare manages to stage a compelling debate about classism without turning his characters into smug ideological mouthpieces. Tom’s spent a life clawing his way up to wealth; Kyra’s deliberately climbed down from its comfort. Their political disagreements seem natural and inevitable.

They also aren’t the point. By the end of the play, we recognize them as just a shield for something more fundamental, perhaps innate. Hare’s writing is strong enough to trace profound emotional wounds without wallowing in them. And Karel’s and Resenhouse’s complex portrayals keep us mulling over the damage long after the lights go out.