We live in a society. 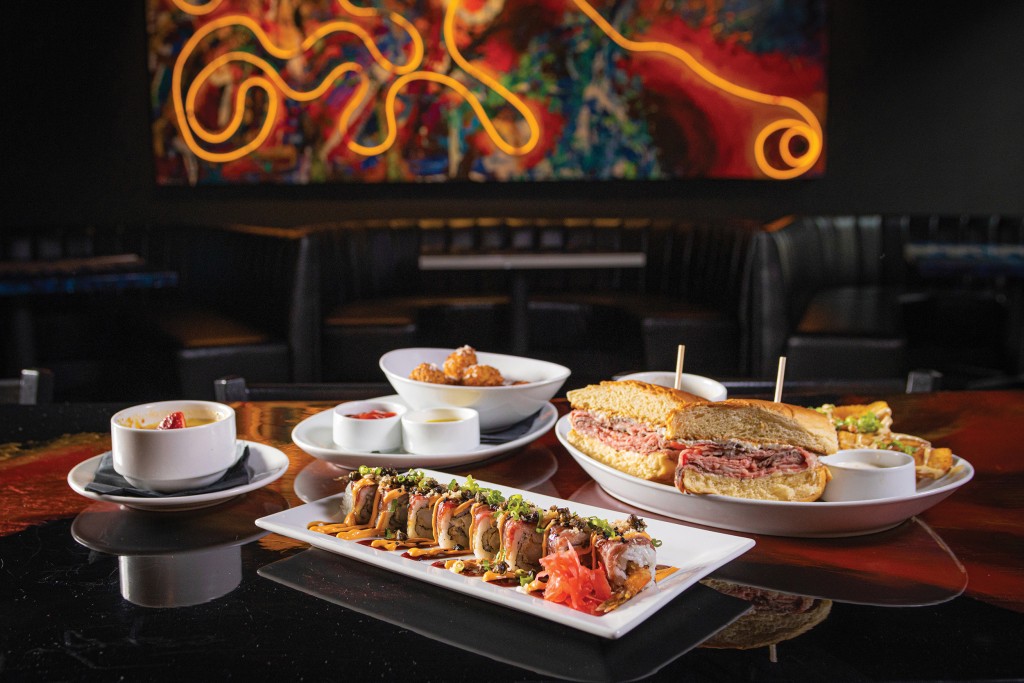 It’s been 16 months since I filed my last restaurant review. Back then, I had no idea what the city’s dining scene would endure—or what it would look like when it came out on the other side. “The other side” is a moving target, but restaurant sales have been booming for months as diners unleash their pent-up pandemic demand.

It seemed like a good time to reenter society and take stock. So I entered Society, the buzzy restaurant-meets-bar-meets-dance-club that opened in the former Crossroads home of The Jacobson this May.

I struggled for a long time to answer the first question. Eventually, I landed on “extremely fast cocktails.” I’m still working out the second one.

I know what Society says it’s trying to be—Society says a lot of things. My interest in the restaurant was piqued by a press release that mocked Kansas City’s “boring wood-paneled steakhouses and played-out speakeasies” and positioned Society as an “art-forward” alternative “hailed as ‘one of the freshest concepts in a while.’” (The quote was unattributed. I don’t know who’s doing the hailing, but I suspect the call is coming from inside the house.)

All of the restaurant’s promotional copy is written from the perspective of a 15-year-old who just discovered negging. Society, the website promised, would offer the city something NEW. Society would be “unlike the cramped, pretentious, dimly-lit cocktail bars popular in the previous decade.” Society would have GLAMOR and LUSH OPULENCE and would NOT VALIDATE PARKING IN THE NEARBY GARAGES. Society would have MASSIVE SCREENS, and some of those screens would be playing ART.

You can imagine my surprise when the fresh, elevated concept turned out to be truffle fries and chocolate lava cake in a neon-trimmed dining room that evoked a Gadzooks in a suburban mall circa 1998.

The restaurant is the unwieldy brainchild of the Trident Investment Group, the Overland Park-based restaurant group that also owns Westport Ale House, The Fall, and (before its April 2020 closure) Parkway Social Kitchen. For Society, Trident has leaned into an eclectic vibe, starting with the restaurant’s ransom-note logo—a jaunty mix of serif and sans. Every square foot of Society has An Art, from the epoxy resin bartop striped like the Solo Jazz cup, to the gold-painted support pole appended with branches to look like a tree. On the dance floor, I spied a large, gilded cage for influencers to take photos in. As an objet d’art, it seemed a little on-the-nose. 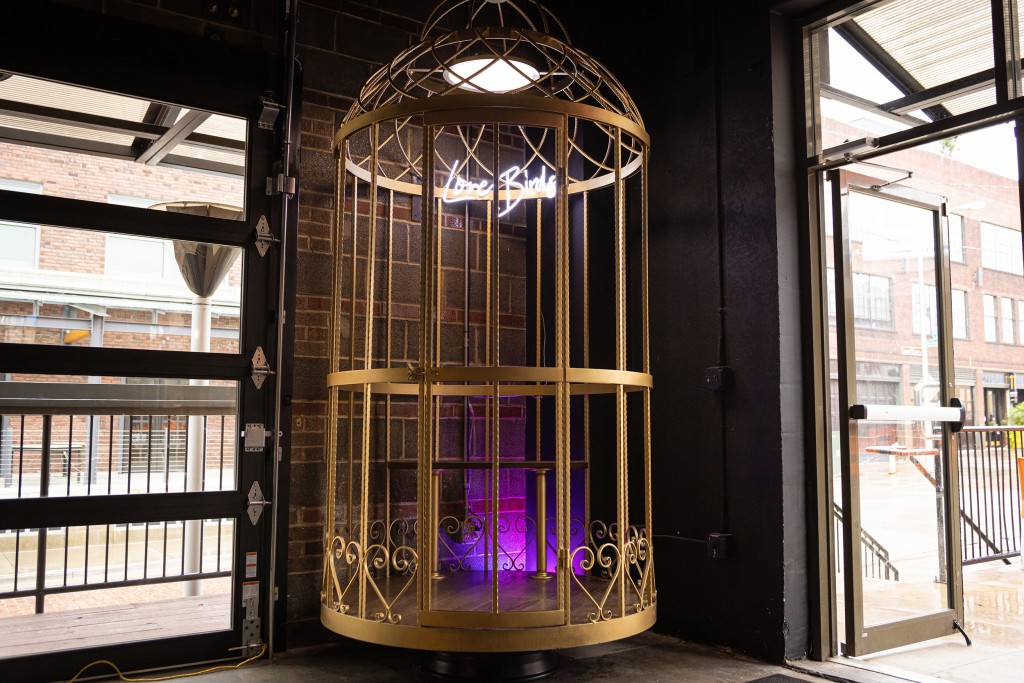 The gilded influencer cage at Society. // Photo by Zach Bauman

The dining room has been fully transformed from its Jacobson days. The walls are black but coated in projector screens and enormous flat-screen televisions mounted in even more enormous beveled picture frames. All of those screens are displaying Art™, most of which is indistinguishable from an early aughts iTunes visualizer.

Chef Juan Jimenez, who Trident brought over from Parkway Social Kitchen, developed the restaurant’s menu, which is a confused mix of pub sandwiches, American sushi, and top-dollar entrees. The starters are what Jiminez and his staff do best. I’m not usually excited about calamari ($14), but Society’s version was a fun grab bag of squid, banana pepper, and jalepeño rings. The breading on all three was crisp and light, and the lemon aioli was creamy and bright. The tater tots ($9) were similar to a version served at Parkway: less tot than large potato croquette, with crisp outsides, melty middles, and a decent kick from the “molten ghost pepper cheese”.

Some of the other dishes are Parkway ports as well, though they’re marginally less expensive than their predecessors. The caramelized prime rib sandwich ($20) tasted identical to the version I had at Parkway in 2018, flaws and all. The bread is still too soft, and the “caramelized onion cream cheese” is still too meek. But it’s fine; it’s upmarket Arby’s.

The burger ($16) would have been great were it not slathered in an aggressively sweet “onion marmalade.” The steak fries served alongside were crisp, puffy, and seasoned like potato wedges from a school cafeteria (I mean this with genuine reverence). The menu calls them “truffle fries,” and Society’s director of operations, Mike Hollrah, told me on a fact-checking call that the kitchen uses truffle oil in the preparation. If they do, it’s in homeopathic quantities—I couldn’t taste it, and truffle oil is not known for its subtlety. My advice is to drop “truffle” from the menu. The fries are great as-is.

The large-format entrees were less successful. The pan-seared scallops ($32) were nicely crusted but overcooked, and the accompanying risotto was clumpy and choked with cheese. The apricot-glazed half-chicken ($21) was well-spiced, with an herby crust and fragrant glaze. But the chicken skin was flabby, the breast meat was chalky, and the paste-y mashed potatoes looked like they’d been doled out with an ice cream scoop.

I kept asking myself: who is this menu for? At Parkway Social Kitchen, which had a midcentury dining room with Don Draper vibes, these entrees made a kind of sense. Here, they feel too heavy and out of step with the atmosphere. Does anyone really want to eat half a rotisserie chicken while DJ Ashton Martin bumps club music?

Some of the lightest options here are the sushi rolls, most of which are either tempura or vegetarian. The rolls were also, on my first two visits, square. I assumed they had been formed in a mold, but Hollrah assured me all of the sushi was hand-rolled. The kitchen’s clearly still working out technique.

The Crossroads Roll ($16) looked pretty, draped with beef carpaccio and studded with crispy capers. But the roll itself was surprisingly bland. All I noticed was the neutral crunch of jicama. The Dynamite Roll ($14) at least tasted like something—mostly, like the sticky-sweet hoisin and spicy mayo drizzled liberally (but elegantly) on the plate. The version I tried was 80% rice, the filling a tiny porthole in a vast white cruise ship. It was also plated with tempura shrimp tails protruding from each end, like a kind of crustacean CatDog. 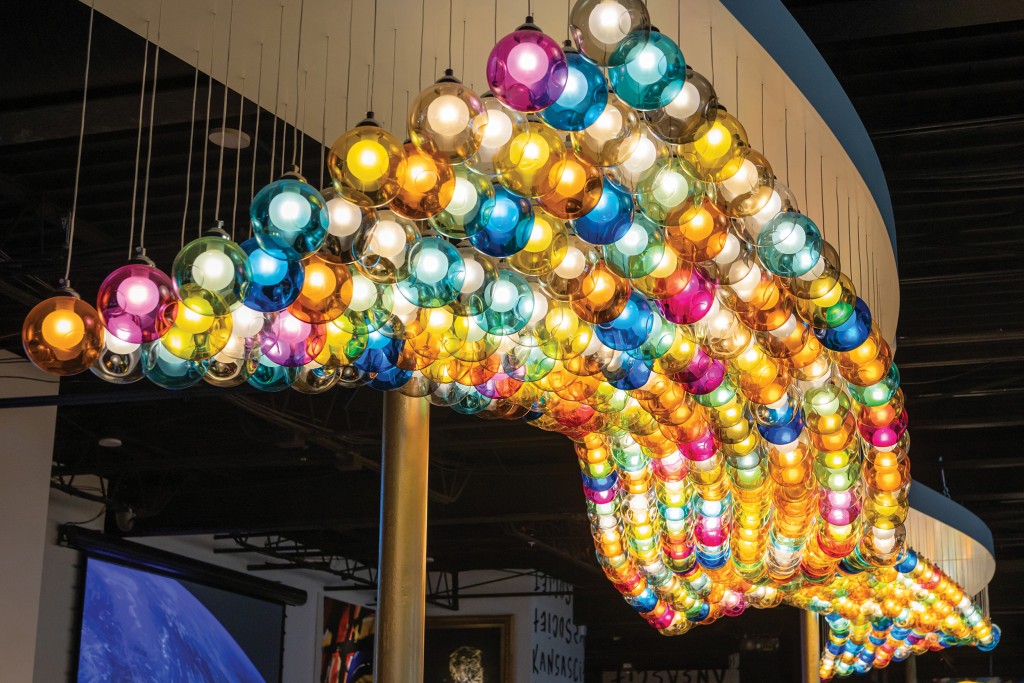 A light installation hanging over the bar. // Photo by Zach Bauman

I formed a new hypothesis: at Society, everything is a sandwich, for art reasons. How else to explain the chocolate lava cake ($10), which was both crowned with ice cream and swimming in a melted moat of it? (Ostensibly, the moat was crème anglaise, but it was too thin to coat a spoon.) The lava cake is the only dessert Society doesn’t make in-house, but the others aren’t much better. The crème brûlée with “seasonal berries” ($12) turned out to be a single raspberry floating in a lake of soup-y, unset custard.

One nice thing about Society is that it’s easy to leave. Service on all three of my visits was swift, attentive, and friendly, and everything came out of the bar and the kitchen suspiciously fast. That’s partly thanks to Blade Moore and Amanda Norwood-Strieby, who collaborated on the cocktail menus at Society and The Scarlet Room next door. All of Society’s cocktails are pre-mixed and served on tap, a choice that allows bartenders to better manage busy weekend crowds.

The drinks look great on paper and in person, though most taste flatter and sweeter than their ingredients list would suggest. The White Peach Hai ($12) was a syrup-y blend of sauv blanc and sake that promised yuzu and grapefruit but only delivered peach. And the Oaxacan Smoke Show ($13) had a fun burnt-sugar nose, but the mezcal and habanero were dulled by a deluge of sweetness. It was also garnished with a desiccated brown lime wedge. This is admittedly a fussy complaint, but with pre-made cocktails, the bar has time to inspect the fruit.

A couple cocktails fared better with the on-tap treatment. The Oleander ($12) was well balanced, adding lime, ginger, and hibiscus to a gin and vodka base. And the Backhanded Compliment ($12; patio-only) was acid-bright with pineapple and grapefruit. It was my favorite of the drinks I tried.

Cocktail fans will have better luck in Society’s adjoining lounge, The Scarlet Room, where the lights are low, the music is lower, and the décor is (comparatively) understated. Crossing the threshold from Society to Scarlet did not, as the website promised, usher me “into a vibrant, intoxicating world of light, color, and opulence.” But it did usher me into a red-toned room with a cheesy fake fireplace topped with cheesy fake candles topped with a cheesy flat screen playing early-aughts screensavers. I would have loved all of that stuff if Trident didn’t insist on taking it so seriously.

The drinks here are made to order, and they’re almost universally better than the ones on tap next door. They’re also significantly more expensive. The WAP (Wet Ass Peach) ($17) was summery and fresh, with a luxe, meringue-like foam. And the Tiki-La ($17) sexed-up the standard tiki sweetness with mezcal and a savory red pepper bite. Still, I’m not sure Kansas Citians will thrill at paying Monarch Bar prices for Cheesecake Factory vibes.

I kept thinking about the mocking copy on Society’s website. The thing those “boring wood-paneled steakhouses” and “played-out speakeasies” have is an identity. It might be predictable, but at least it’s coherent. Society can’t seem to decide what it wants to be. For all its bluster about creativity and innovation, the restaurant seems content to repackage decades-old trends at a high price point with uneven execution. It doesn’t have a point of view—just an ego. (A reminder, I guess, to PR types: if you’re going to come out swinging, you’d better have the goods).

Society started brunch service last month, and the cheery patio and prime Crossroads location are likely to keep attracting new diners. The restaurant’s going to need a stronger sense of purpose and progress to keep them coming back.

At least, that’s my contention—really, my hope. I hope diners want more than lava cakes and dynamite rolls. Kansas City’s culinary scene has so much more to offer. But restaurants are businesses, after all, and they’re ultimately going to give us what we ask for. We… live in a society.