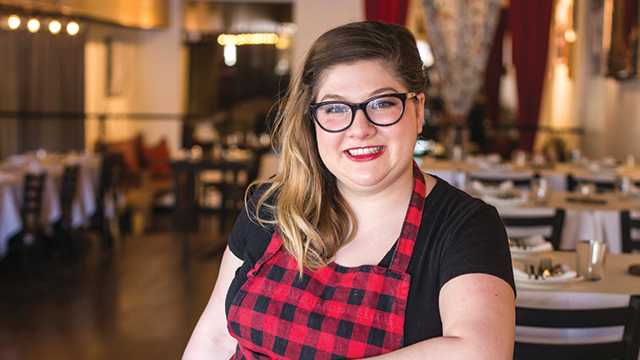 With midtown’s Krokstrom Klubb and Market, chef Katee McLean, somewhat remarkably, can take credit for opening one of the first Scandinavian restaurants in the United States. With that duty has come much explaining — starting with how Scandinavian food differs from Nordic food. The latter, relatively rare itself, can be found in Minneapolis, Los Angeles and New York.

“When you say Nordic, you are saying hyper-seasonal,” McLean explains. “You focus on one ingredient — say, garlic. Then it’s garlic done 18 ways. It’s not about traditionality — it’s about what’s available. Scandinavian is food from the home. It’s what they would eat there, the common dishes, a lot of them traditional. Some of this you would do in cafés for lunch, but you would never serve it for dinner [at a restaurant], which makes people think, ‘Why would you give me what I eat at home?’ ”

So, unless you live around Minneapolis or in the heavily Swedish Lindsborg, Kansas, ostkaka (a cake made from cheese curds), smørrebrød (a sort of open-faced sandwich served on dense rye), gravlax (cured salmon) or tunnbrödsrulle (a popular Danish street food) are likely new to you. But even if you know those dishes, you haven’t had them McLean’s way. Her approach at Krokstrom mixes the chef’s interpretations with traditional recipes, with everything on the menu approachable and artfully presented.

Krokstrom thus gives the uninitiated an opportunity to sample Scandinavian food for the first time, while providing people of Scandinavian heritage something long absent from local tables.

“Our target demographic was totally off-base,” McLean says. “We thought it would be young hipsters and foodies, but it’s not. I mean, some of them come, too, but there are so many men and women, in their fifties or older, from Johnson County, that say, ‘It’s the food my mom or my grandma made.’ They think that’s so weird, but then they’re excited.”

McLean, who grew up in Platte City, is of Swedish descent; her grandmother’s name was Krokstrom. McLean began working in the service industry while she was in high school, and, at the University of Missouri, set out to study food science. She soon realized it wasn’t a good fit. “I didn’t want to make fake flavors,” she says. “I wanted to create something new. I wanted to cook.”

So she moved back to the Kansas City area and enrolled in the culinary program at Johnson County Community College, moving through what she describes as the “long haul,” studying both front and back of house and ultimately landing a spot on a culinary team that traveled to an international culinary competition in Singapore. The trip included a stopover in Hong Kong, with the team spending two weeks in each megacity, learning new cooking techniques and unfamiliar types of cooking equipment. But for McLean, the key revelation was in the native food, with its deep roots in tradition.

“As a young chef you are constantly trying to find what makes your cuisine you,” McLean says. “When I came home [from China], I reached out to my family, asking, ‘Why don’t we have traditions?’ My mom said, ‘Do you think every kid had pickled herring or a pickle shelf? Remember Grandma’s cinnamon rolls and cream puffs? They’re not like American ones. They are Swedish.’”

This realization ignited McLean’s will to learn Scandinavian cooking. She pored over family cookbooks and scoured the internet for variations on traditional foods. She learned that Scandinavian cooking does without olive oil — there is instead rapeseed oil — and makes strong use of vinegar, lending even creamy dishes a tart brightness. (McLean believes the latter is meant to evoke sunny flavors in a country that spends the winter in perpetual darkness.)

While she studied, she took positions with PB&J restaurants, working at Shawnee Mission Medical Center, Newport Grill and Paradise Café in Overland Park. What she learned was that she wanted to try it herself. She and her husband, Josh Rogers (who today is the manager of Krokstrom), thought they might begin modestly with a supper club. But the opportunity to lease the space at 36th Street and Broadway presented itself, and Krokstrom opened its doors in February 2016.

In her second year at the helm of a kitchen, McLean continues to experiment. This month, she debuts a new spring-summer menu that features a host of new items: Danish house-cut pickled fries, sprinkled with bay seasoning and served with mayonnaise and sweet and green onions; smoked duck carpaccio, served with wild-rice salad, rutabaga and radish and drizzled with horseradish vinaigrette and lingonberry reduction. She is also offering her take on that cheese-curd cake ostkaka — hers being a rabbit ostkaka served with peas, carrots, cumin oil and tarragon vinegar.

The new dish she is most eager to unveil is the tunnbrödsrulle, a food that sounds like it could never work but has become a late-night staple in cities such as Copenhagen. Tunnbrödsrulle (say tunes-broad-row-ee) is fashioned out of a flatbread filled with mashed potatoes, shrimp salad, a hot dog, cucumber-and-onion salad, lettuce, mayonnaise, sour cream, mustard and ketchup.

“I thought, ‘What insanely high person thought of this?’ ” McLean says with a laugh. “But we thought we needed to try it. So I just got straight-up hot dogs from Fritz’s and made it, real-deal. I was wondering how we all were going to try it, so I rolled it up real tight and cut it into slices. It kind of looked like sushi. All the servers came over, and we just started laughing. They said, ‘It’s done.’ Sometimes you just trust it, respect it, try it and are blown away.”

McLean’s Tunnbrödsrulle adheres closely to the original but uses lefse rather than a thicker flatbread, and a ketchup curry instead of the ketchup-and-mustard combo. It satisfies by hitting a major chord of flavors and textures: sweet, savory, tart, soft, crunchy. Like so much of what McLean makes at Krokstrom, you didn’t know you wanted it. But you do.