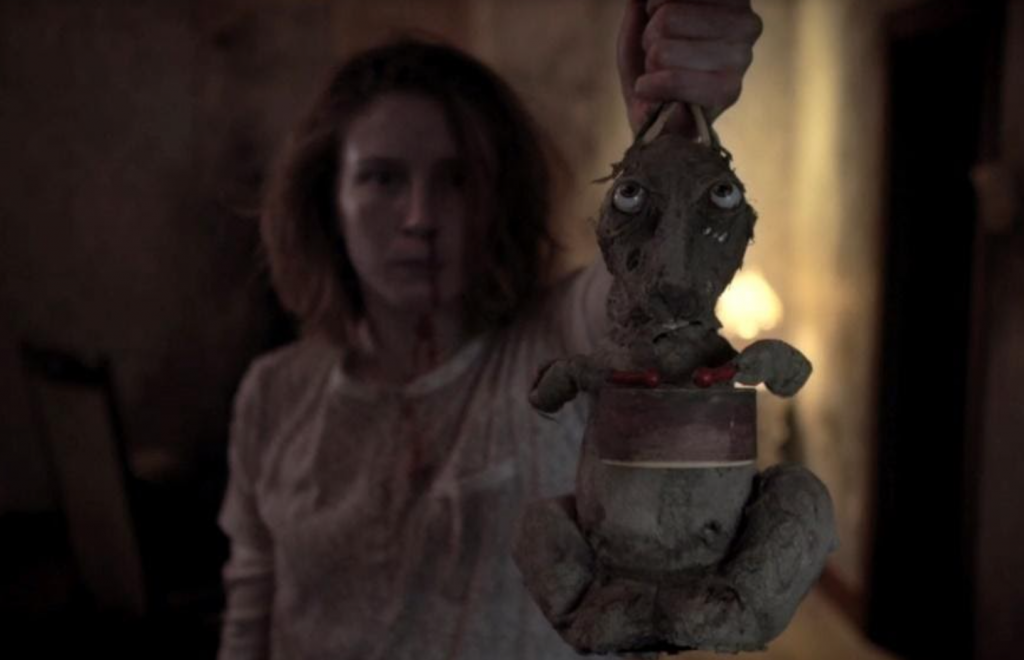 Y’ever just see one of those spookfilms that you know is gonna stick with you forever? This is one of ’em. Not sure how it sticks in you so hard from start to finish, but it is undeniably built to hang around—long after you’re meant for bedtime.

In the feature debut from Irish writer/director Damian Mc Carthy, Caveat gives us a macabre tale that starts as a quiet creep-out and never stops escalating. At least until it becomes a full-on “shouting at the TV” type of tension headache.

In the best way. Obviously.

Isaac (Ben Caplan) is a bit of a drifter, who suffered a recent trauma and hospital stay. His landlord hires him to watch over a niece named Olga (Leila Sykes). Olga is mourning the loss of her parents at a remote mansion. It’ll be an incredible payday for Isaac to just sit around and play babysitter for five days, making sure that nothing hurts her.

There’s one caveat: he must wear a leather harness and chain that restricts his movements to certain rooms. Olga has a fear of being attacked by a caregiver, so to provide her a safe space, the caregiver must be restrained.

I’m a sucker for a good cat-and-mouse thriller, but so rarely have a seen a feature film where everyone involved is both cat and mouse… as well as whatever apparitions (and regrets) occupy the same haunt. While the premise might seem convoluted or a little outside what sounds like “a fun time”, I promise that by the end of the opening five minutes, you’ll be aware that you’re in for… something quite singular in Caveat. Perhaps this is best summed up by the film’s ability to almost entirely bridge blood-chilling horror with an unexpected sense of slapstick? Nothing here is “funny” in any way. The process of watching it will have you cackling at yourself for stepping foot in this haunted house, willingly.

Mc Carthy wrote, directed, and served as the film’s editor. I don’t mean to hand out compliments lightly, but this is easily one of the best horror debut features I’ve ever seen. It’s been a week since my first watch, and when I’m falling asleep each night, I am haunted by a different scene as I try to drift off. None of this stems from the traditional gore/violence shit—this is just a taut thriller that’s shot and edited like it was sent from Hell to hurt you.

This comes with our highest recommendation. Best haunted doll I’ve ever seen. 10/10.