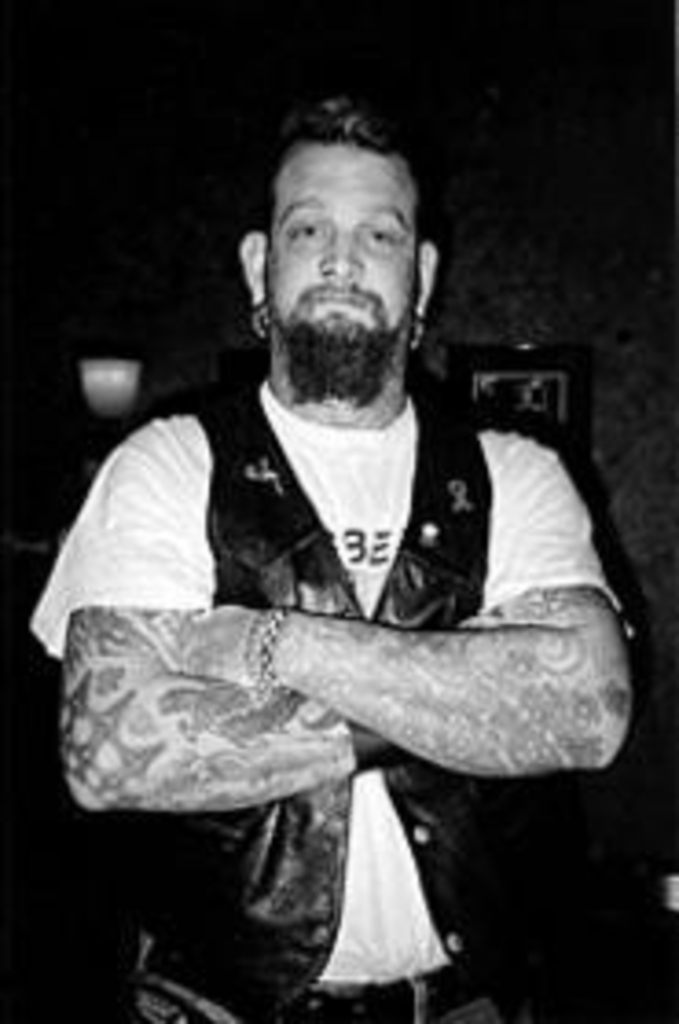 The two most important things to know about the Bulldog are that (a) it has one of the coolest drink menus in town; and (b) if a guy named Buzzey is kind enough to offer to show you his particular party trick, go with it. Believe us, the drinks will gird you against anything.

We visited this fine establishment on a recent Saturday night with special guest Research Assistants Melanie and Peter, who were visiting from San Francisco and Washington, D.C. We had become close friends when we were White House interns together. Because we had emerged unscathed from working under Clinton (not literally — otherwise we’d all be working at Revlon), the NR figured that a night at a new bar connected to a strip club would be titillating good times.

When we first walked in, around 10:30, things did not look promising. Even though there was a jazz band (and no cover — bonus!), there were fewer than thirty people in the joint. We pored over the drink list, which is divided into historical eras, and consoled ourselves with the Pimm’s No. 1 Cup, our new favorite libation. Made with the fruity, gin-based liqueur and mixed with ginger ale and lemon-lime soda, this tasty British classic was a lovely summer cocktail.

After chatting with many of the amiable patrons, we found Buzzey, 37, a pierced tattoo artist who moved from Boston about 10 months ago because his friend lives here. He’s a fascinating guy, and we immediately liked him for his, um, openness. He was clad in a thin leather vest over an American-flag T-shirt and jeans; his bleached-blond hair was shaved into a mulletesque landing strip on his head.

“Is Buzzey your real name?” we asked.

“I know it is, because it’s mine,” he said, in a not unfriendly tone. “I’m half-Irish and half-Scottish, and the three things I do best are drink, fuck and fight.”

“In that order?” we queried.

“Well,” he recanted. “I’d have to switch fight and fuck. But I can fuck for 6 hours at a clip. Just ask my girlfriend. I throw her around and spank her for a bit.”

“I’m a regular here,” he replied. “You know how it’s called Bulldog? Well, I’m the pit bull that protects it.”

“Are you going to go next door?”

“Nah,” he answered. “But the chicks are hot. I’d give it [Bazooka’s] an 8.5 or 9. It’s a great place … I saw Ron Jeremy there, and that was the shit, dude. He’s fat, old and ugly, and he still gets ass. I wonder why I don’t get any. I eat pussy like a motherfucker. I got a two-gauge Prince Albert, and all the girls like it.”

We gaped at that barrage of information.

“I got a horseshoe with two fat beads underneath — it gets the girls all the time,” Buzzey continued. “They make a fucking puddle on the fucking bed. Do you know what a Prince Albert is?”

“A Prince Albert goes in your pee hole and goes out the bottom,” he replied. “I got to sit to piss. But I did it myself. I was sitting at home, bored, watching TV, and I decided to pierce my dick.”

“Were you on anything? Did you liquor up beforehand?” we wondered.

“No … the worst part was sticking the tube down my pee hole, though,” he answered. “The needle part wasn’t that bad.”

Our conversation turned to his girlfriend.

“We have an open relationship,” he said. “She’s married, but it’s all good. We met on an elevator, and now she’s my slave.” We started laughing, thinking he was being cute.

“No, I’m serious,” he insisted. He showed us the thin silver band on his pinkie that read “master.” “She’s my submissive. We had a collaring ceremony.”

“What exactly does that involve?” we asked, wondering if it was as massive as the wedding-industrial complex and how we could capitalize on it.

“Well, it’s like a wedding,” he explained. “We exchanged vows, and I put a collar and leash on her.”

“Where can you have this ceremony?”

“It can be anywhere that’s BDSM-friendly,” he said. He didn’t want to say where his own ceremony had taken place.

Just then, a staffer walked by and called out, “Hey, show her the bar stool trick!” Buzzey turned to us eagerly. “Wanna see it?”

“Of course!” we replied. We walked to the back room for the demonstration. Several staffers were lounging about, and when they heard that he was about to do his thing, a couple of them fled, crying out, “Auggh! I’ve already seen it!”

After hefting some bar stools and deeming them too heavy, Buzzey took his chain necklace off, made a loop around a chair leg, turned it sideways and hung it on his Prince Albert. Then he let go. The chair hung in midair for several seconds, stretching his wormy Johnson, then the show was over.

“Did it hurt?” Peter asked. Apparently, it did not. “I’m hung like a stud sand flea, and that just stretches it out!” Buzzey chortled.

All we could do was applaud. Really, the night was just downhill from there.