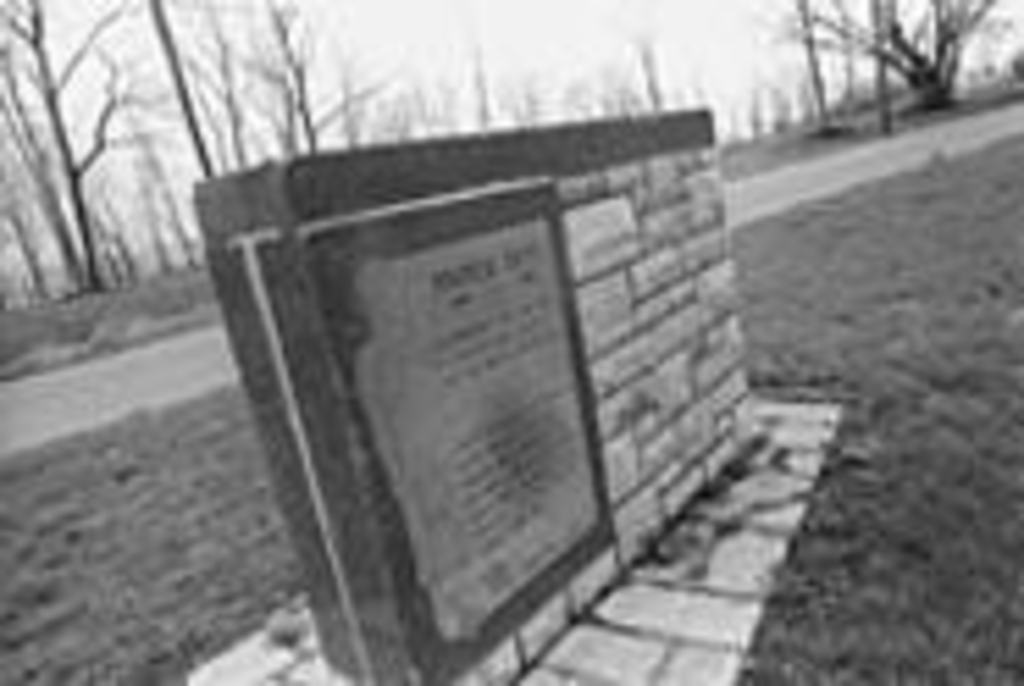 For a few days at sunset each September, a tiny, gritty corner of Kansas City’s west side fills with the fluttering orange wings of thousands of monarch butterflies that stop to rest on their migration to the fir forests of central Mexico.

They glide onto trees that surround a tiny patch of grass that was Kansas City’s first park. A granite and limestone marker commemorates the park’s namesake, Andrew Drips, an 1800s fur trader and scout Kansas City can claim as its “own mountain man,” in the words of Ross Marshall, who leads tours to the park for the Oregon-California Trails Association. In 1882, the family of Drips’ son-in-law donated the land to the city for a park.

The park sits on a bluff above the Missouri River, just north of Jarboe Park. Thousands of motorists pass it daily on I-670, but it’s out of sight, dozens of feet above the highway. The elevation makes nearby trees attractive to the visiting monarchs, which seek out high but sheltered places, says Chuck Taylor, director of Monarch Watch and a professor of entomology at the University of Kansas.

Kathy Kirby, who has lived on the west side for more than twenty years, says the butterflies sometimes look like snowflakes.

“There are lots of them, and they’re just gliding everywhere in the sky and falling down into the trees, and some years they just cover [the trees] completely. I’ll go down my alley and just have clouds of butterflies swishing around me — it’s kind of like childhood, magic stuff.”

The trees where the butterflies gather, though, have been thinned out by a developer who has parceled the bluff top west of Drips’ marker into three lots for single-family homes to be built this year, and the nonprofit group Westside Housing last week bought the property to the east of the park with the goal of building nine houses there.

Jerry Shechter, the executive director of Westside Housing, says that he plans to meet with the developer who owns the property across the way to express concerns about destruction of habitat for urban wildlife.

“There’s quite a few trees that have been pulled out there. That’s always been a major resting place for the monarchs and migratory birds, and whether it will continue to be, that’s in some doubt,” Shechter says. He believes the developer’s plans to build separate single-family homes as opposed to townhouses or another “monolithic” structure is good news because it means more trees may be left standing.

The construction of houses should not affect the butterflies’ return, Taylor says, but changes in the tree population might.

“Some of these places are very predictable from year to year, and if you take them away, the butterflies don’t come,” Taylor says. Numbers of monarchs vary from year to year for many reasons, though. Loss of habitat in Mexico was part of the cause of a mass die-off of monarchs this past winter.

So far, nature-loving neighbors say they are impressed that the developer, Dave Haggard, left many of the larger trees on his lots standing and did not clear-cut and bulldoze the property. Haggard says he cut down “maybe hundreds [of trees] depending on what you count as a tree” but says he would call most of what was removed “brush.”

Haggard’s nephew, Corey Ruppert, of McHenry Architecture, is the architect on the project.

“We had to clear it out all by hand. There were massive chunks of concrete; lots of trash people had been dumping on the site. There were some shady types that hung out there — we found needles, beer bottles, used condoms, everything.”

Haggard and Ruppert say they have a strong interest in creating “environmentally sensitive” homes that fit in with the other homes in the neighborhood. They are researching cutting-edge building materials, including energy-efficient aerated concrete blocks.

Ruppert says he has a personal interest in monarch butterflies and wants to make sure the winged visitors return each year despite the development.

“We believe in creating density within the urban core, but that needs to be balanced with concerns for the urban wildlife,” Ruppert says.