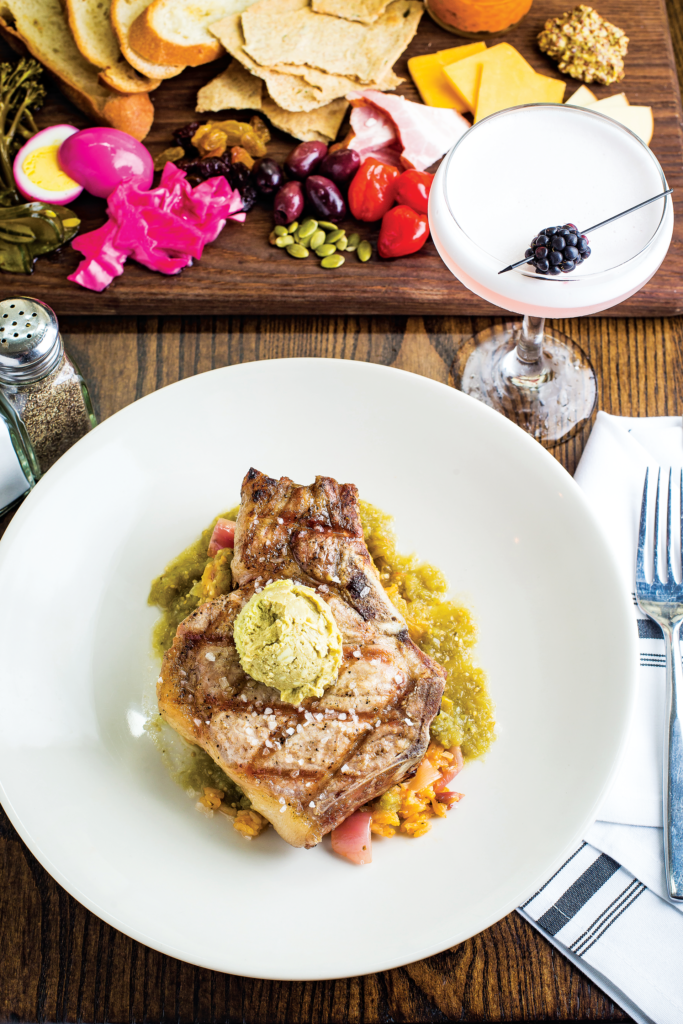 The bartender wasn’t happy with the drink.

He strained a blush-pink cocktail with the focus of a chess grandmaster, siphoned a taste with a straw — and scowled.

Not good. Not great. He tipped the glass into the sink behind the imposing wooden bar. He started again.

I’d been waiting 20 minutes for that cocktail, but I couldn’t help admiring the effort.

That bartender fits right in at Brown & Loe, a restaurant where you can feel — and sometimes see — the struggle toward perfection. The drinks and the food aim high. And, much of the time, they make the grade.

Brown & Loe opened on the edge of the City Market last August, but it already has the feel of a permanent tenant. Much of that comes down to décor — the lofty dining room once housed the Merchants Bank and has kept a few of its original architectural features. There’s the vault, yes — now a semiprivate dining room for six — but also the pale coffered ceilings and the frosted white globe lights and the columns dressed in marble the color of old money. At dinner, early evening light streams through the lanky southern windows, making the restaurant’s restrained palette seem more stately than spare.

But the centerpiece is the bar, 40 sprawling feet of chestnut-brown wood and matching brass-trimmed stools. That’s no surprise when you consider the owners: Kate McGlaughlin and Harry Murphy of Harry’s Country Club. The alcohol selection at Brown & Loe isn’t quite as extensive as that of Harry’s, with a modest wine list and a solid slate of drafts and bottles. (The menu doesn’t list prices for the beers or the cocktails, an obnoxious pretension no matter the room’s elegance.) But the cocktails, developed by bar manager Ruth Dyer, put a welcome emphasis on retro flips and fizzes, giving protein-craving meatheads (hi) cause to rejoice. The Clover Club is a light, balanced blend of gin, lemon, raspberry and vermouth, topped with an egg white shaken just long enough to add a frothy foam lid. The egg white shines again in the Sloe Gin Fizz, a milder, sweeter drink with a subtle prune-y edge. And yolk lovers can take comfort in the Cynar Flip, which adds a creamy softness to its bitter botanicals.

Less successful: the Hop Fix, which doesn’t yet live up to its name. Although I like Firestone Walker’s Luponic Distortion, the beer’s bite mysteriously vanished in the brew of gin, beer and grapefruit I was served. (Brown & Loe lets you select your spirit; I deferred to the bartender.) The grapefruit added a screen of complexity, but the drink was ultimately flat and oversweet. And the Blonde Negroni, which swaps Campari for Luxardo Bitter Bianco, was a tad harsh and syrupy. I preferred the Americano Sparkler, a dry, effervescent riff.

Brown & Loe has a wide selection of starters, but its variety-show boards won my affection. Both take cues (and ingredients) from the neighboring City Market, though the menu isn’t precious about it. The word local is notably absent from any dish descriptions; a chalkboard hanging by the kitchen quietly names the farms and ranches of the day.

Thanks to that focus, vegetarians at my table weren’t resigned to relish-tray afterthought. The Garden Block I ordered was an expedition of textures and flavors, filled to its edges with fresh vegetables, unusual pickles and three wee canning jars of grains and spreads. The finest of these was the mushroom pâté, a cold and herby paste with a brisk, smoky bite. The pâté was just as satisfying scraped over soft flatbread as it was scooped with a spindly, lattice-cut chip. The other two jars contained a thick butter-bean hummus (riddled with fragrant rosemary) and chewy, butter-yellow lentils in a sweet-tart vinegar dressing. All three proved fine complements to pickled Brussels sprouts (fork-tender), pickled peppadew peppers (sweet with a shy heat) and shaved discs of watermelon radish (as colorful as they sound).

The bad news: The Garden Block is no longer on the menu. “This is our first menu change since we opened last August,” McGlaughlin tells me. She plans to stick to traditional fall-winter and spring-summer menus, phasing items in and out as the seasons demand.

The good news (for carnivores): The chef’s board, which is still on the menu, was just as well-stocked as the Garden Block, if a bit more predictable. Slices of smoked gouda and sharp cheddar (creamy and inoffensive) were fanned alongside white anchovies, generous chunks of salty linguica sausage and wedges of Braunschweiger. A tablemate proclaimed the latter the Malört of meat — distinctive, divisive, with a dedicated niche following. Brown & Loe’s rendition is mild and herby, as gracious an introduction as diners are likely to find. An unexpected hit: a garnish of pickled grapes, which offered a tart sparkler of flavor between the fattier bites.

Nearly every dish on the menu boasts some similar small or surprising pleasure, evidence that executive chef James Paul and sous chef Aaron Salinas have achieved something increasingly rare: a coherent menu robust enough to appeal to varied appetites (both literal and fiscal) and focused enough to set a style. Think homespun comfort food that went to college in the South.

Nowhere does this theme coalesce more satisfyingly than in the grilled short ribs, which swim in a rich and savory root-beer jus. The plate I was served was velvety but not overly fatty. The accompaniments — creamy and unassertive grits; firm but well-cooked collard greens — soaked up the meaty gravy without competing for the limelight.

The dry-aged pork chop (well done yet moist) was another success. Spiced honey butter and vibrant slices of bourbon-braised apple amplified, rather than buried, the meat’s flavor. But the stars of the plate were the baked red peas, served in a glossy, spoon-coating sauce the color of dark chocolate.

This is earnest food well executed. But not every dish lives up to its ambition. Small slips or flavor miscues teased all three of my visits. And when the venue is this strong, trivial errors can take on outsize importance, like an out-of-tune flute in a renowned symphony.

This was true of both the least and the most expensive plates on the menu. The cheeseburger and fries ($12) looked promising but proved structurally unsound. A confession: I’m ready to retire the bread-and-butter-pickles-on-burgers trend. Here, the pickles added a discordant sweet note that, together with the fennel-pollen aioli, overwhelmed the flavor of the meat. Worse, their placement beneath the burger sogged through the sesame-seed bun, forcing an emergency knife-and-fork deployment halfway through the meal. The fries were likewise soft for my taste.

On the other end of the spectrum: the $30 Lisbon Stew, a collage of fish and shellfish that tasted like a heartier, tomato-thick caldeirada. The dish was nearly worth the price tag: The shrimp were enormous and juicy, the mussels mild and tender, the cod flaky and flavorful. But the smoky slices of linguica sausage were too tough to blend with the bowl’s delicate textures, and the toothy tomato broth was underseasoned. A little more experimentation would make both dishes better values.

Brunch service is nearly a requirement for any restaurant in the bustling City Market, and Brown & Loe’s weekend menu merits the trip. Bonus: The restaurant takes reservations for brunch, which means you can actually snag a table. The coffee’s fresh, and the bar makes a fine Bloody Mary (thick and savory, light on the citrus; the Goldilocks of morning booze). But the Southern-slanted hangover food is the main draw. The Market Benedict stacks poached eggs, collard greens, house-cured bacon and red-eye hollandaise atop a nutty brown-butter cornbread (crisp home fries on the side). Again, the plate I sampled landed shy of a home run. While thematically fitting, the cornbread base crumbled into curds at every attempt to chase an even-layered bite. A chewier bread — or more even, thorough browning — might yield a sturdier base for the silky benedict.

Also tantalizingly close to perfection: the jerk-chicken chilaquiles. The dish was bright and satisfying, with mild queso fresco to lighten up the rich hunks of dark-meat chicken. The warming spices were perhaps too subtle on my visit — the flavors leaned more Southwestern than Caribbean. But the dish could also benefit from a little quality control; my chicken arrived with a bonus knob of crunchy cartilage from a leg joint. 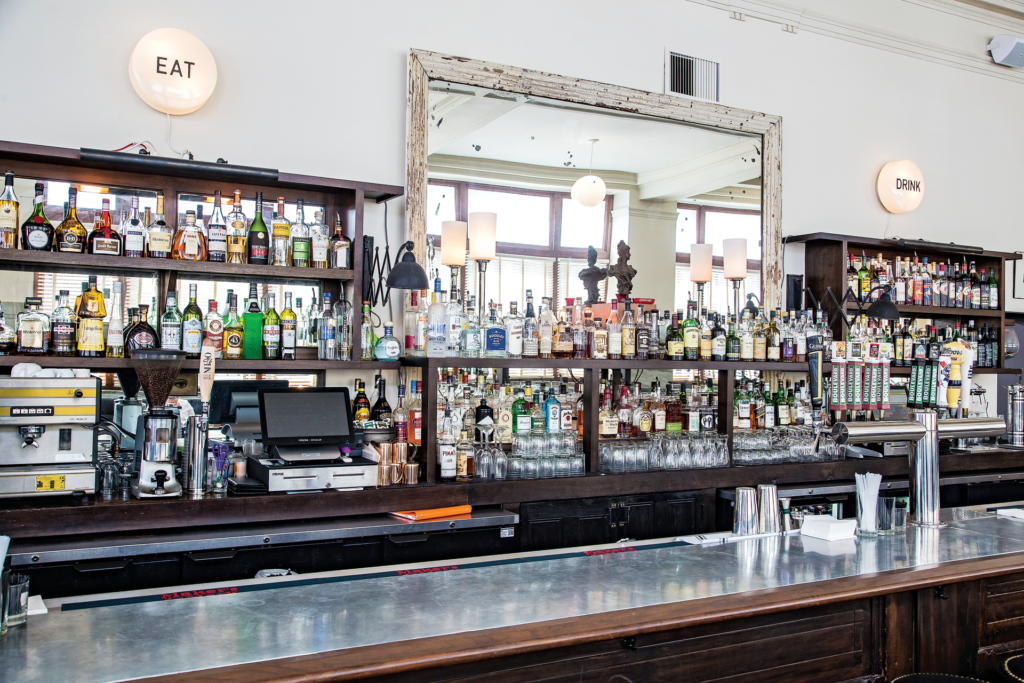 During brunch rush on a sunny Saturday, the servers were confident and composed. I’d heard complaints about slow service when Brown & Loe first opened, but general manager McGlaughlin seems to have worked out the kinks. Drinks are another issue (see: that half-hour cocktail, which my server comped unprompted). But food came out swiftly on all three of my visits, and servers topped off glasses and whisked away plates without hovering.

One quibble: Though two of my three visits overlapped the restaurant’s posted happy hours, I never received a happy-hour menu (or even a tacit acknowledgment that one existed). I consoled myself with the dessert menu instead. Pastry chef Joy Costa’s small, competent menu fits effortlessly into Brown & Loe’s upscale, down-home vibe. The Dixie Pie (which has since sadly seceded from the menu) was worth every groan of the food coma. The crust checked off a slew of seemingly contradictory boxes: soft, chewy, airy, puffy-fluffy. And the salty-sweet filling was the platonic ideal of pecan pie, which is too often cloying. Brown & Loe’s rendition laced a stiff bourbon-chocolate ganache with chewy toasted pecans and a spiced cherry compote. Other bites I tried were no less fine: the Key-lime pie had a firm, tart curd and a chewy graham-cracker crust, while the strawberry-basil sorbet (flavors rotate frequently) was sharp and fresh-tasting.

Not every dish at Brown & Loe reflects the restaurant’s physical polish, but the space is striking and the food charming and thoughtful. McGlaughlin and Murphy have made a fine bet with the Merchants Bank building. A few menu tweaks could yield a restaurant that’s rich without seeming to try too hard.

Sip an Americano Sparkler and split the Garden Block with a friend. Save room for the grilled short ribs — and one of Joy Costa’s desserts.