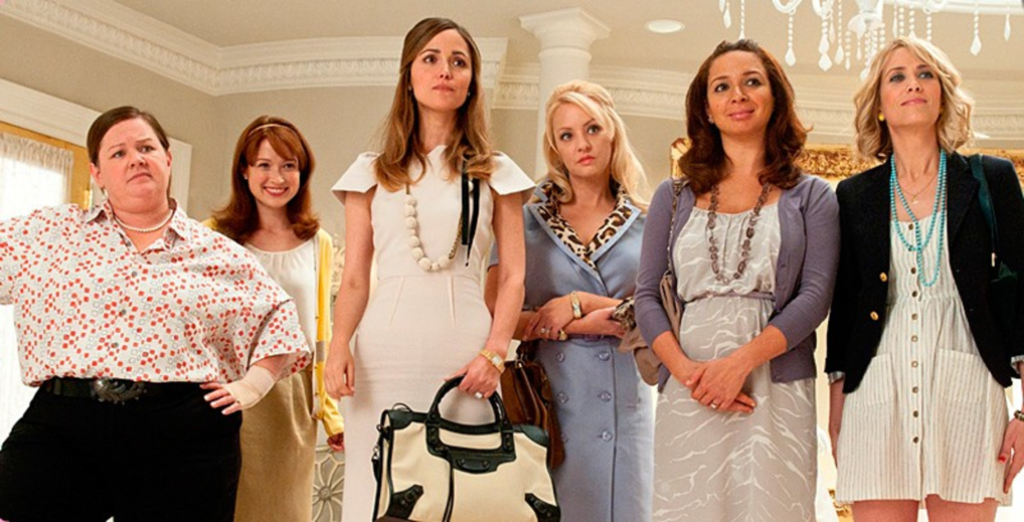 Bridesmaids seeks to be something that’s long overdue: a chick flick for people who hate chick flicks. Kristen Wiig, who co-wrote the script, stars as Annie, a single gal who becomes maid of honor when her best friend (Maya
Rudolph) gets engaged. She soon learns that it’s a title she’s not really all that equipped to handle.

A financially struggling 30-something, Annie tries to cut corners on her pal’s nuptials, mostly to save some money for herself. She finds it impossible because her other bridesmaids, including a socialite (Rose Byrne), want to splurge on dresses and go to Vegas for the bachelorette party.

This is an Apatow Company production, so Bridesmaids balances outrageous, crass set pieces with a sweet, sympathetic story. Leisurely directed by Freaks and Geeks creator Paul Feig, it scores more with the latter than the former. The first half of the movie tries to go for the gross-out gold, as Wiig and the ladies engage in such lowbrow acts as losing their lunches in a bridal shop.

But the movie fares better in the second half, when it focuses mostly on Wiig and her hilarious, human attempts to stop getting in her own way and resist being a selfish screw-up. And you understand why rom-coms have failed to click with audiences: A-list divas don’t capture the everyday pressures that women face.