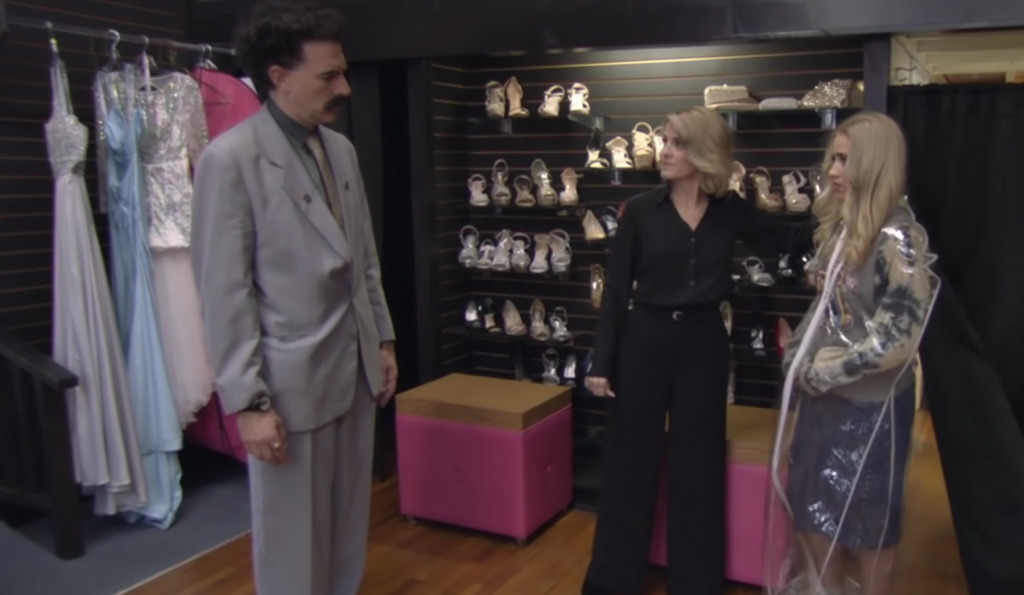 Borat and daughter in a dress shop. // Courtesy Amazon Studios

Since the release of the original film 14 years ago, Borat Sagdiyev (Sacha Baron Cohen) has been trapped in a Kazakhstan labor prison, working off his crime for making the country a laughingstock. He’s called back into action by Kazak leadership and sent to America with a mission to woo President Donald Trump—or at least one of his many minions. He winds up accompanied by his daughter, Tutar (Maria Bakalova), who uses the trip to come into her own

Let me say this from the start: I do not envy anyone whose job it is to write about this film. There are layers of pros and cons, plusses and minuses, that create a grey area which might not be discernable in any concrete way until years down the line. So let’s tackle the three tiers of what needs to be addressed.

First, the film is wildly funny. But that’s got a thumb on the scale against it because I’ve never seen a movie that needed to be seen in a packed theater more than Borat Subsequent Moviefilm. Streaming on-demand is simply the worst possible way for this to have released, but obviously, there wasn’t a path around this in 2020. And, thematically, it wouldn’t exist in its current state without the pandemic. The return to a mix of scripted and documentary content yields mixed returns, although no matter the context Maria Bakalova proves herself to be a comedic genius on par with Baron Cohen.

Some jokes and situations feel like beating a dead horse, especially patches early in the film. My first watch involved a few dead stares as it seemed like Baron Cohen was only going to be hitting on the same lite anti-Trump humor that you might catch from any late-night TV host. Then the film finds a sort of footing, and it’s off to the races.

The second tier of discussion here is how important the film feels. It skewers the current political situation in a manner where it’s clear things were still being reshoot and tweaked right up until release. The film is timely and dictated to the creators by the time. There was no way to script or plan for what this production would become, and it’s a bit awe-inspiring to think that we’ll always have this historic document of this year, as seen through the eyes of a top-tier satirist.

But that brings up to the final tentpole of discussing Borat 2: is this funny?

I left my first viewing of it convinced that, minus some great jokes based in the scripted narrative, I maybe hated this film? I’ve given it two more passes in the same number of days, and I find my enjoyment growing with each pass, which is admittedly rare for a film. So kudos! But I’m finding that I’m not alone in my reaction.

Borat’s adventures in America the first time around exposed a vile underbelly of a country that, especially during the Bush Jr. administration, insisted that we were better than all of this. It shone a light on the skeletons in our closet and all the ways we were failing ourselves, and the rest of the world. 14 years later, under the Trump administration, I don’t understand what we needed Borat to accomplish.

As the character tours America, the people he interacts with are mostly right-leaning people, ranging from the casually racist on up to total QAnon radicalization. In one extended sequence, Baron Cohen opts to quarantine with a couple of dudes who are all in on Pizzagate and believe that Hillary Clinton drinks the blood of children. It’s funny, sure, but based on Facebook’s reported data before beginning to strip QAnon communities from their website, they showed as many as 3 million Americans were subscribed to at least one Q based group. These guys in the film are fucking idiots, sure, but the problem is that a minimum of 1% of Americans also think this is a reality. They aren’t just some lone wolves or stand-alone characters—they represent millions of people we share a country with. Is that… funny? Or is that crushingly bleak?

The same thing goes for the much-ballyhooed interview with Rudy Giuliani that takes place in-film. Ignoring questions around the scandal that even Donald Trump has felt the need to weigh in on, there’s a stark example of why this film feels superfluous. Borat’s underage daughter tricks the Trump advisor into an interview in a hotel room. It’s handsy, drunken, uncomfortable, and will mostly just send a shiver down your spine. The thing that everyone seems to be missing about it is that the true outrage should be the substance of the interview he gives, where he lies through his teeth while attacking China and praising the President. It’s unhinged shit, but… none of it is shocking? None of it reveals anything new? Giuliani has said far worse right on cable news or in any one-on-one interview with a female journalist.

The substance of all these situations should be what gives them weight; importance. But unless you’ve been completely disconnected for the last four years, it seems impossible that you’d raise an eyebrow at the substance of the conversations here. Yes, the pastor running a fake women’s clinic is going to pretend he didn’t just hear about incest resulting in pregnancy. That’s what they do. Yes, a plastic surgeon is going to try to convince a teenage girl to get breast implants, even when it’s obvious she’s not interested. That’s the America we’ve known for a while. And for every profile of right-wing threats of violence or COVID-19 deniers, I mean, we’re just not through any of that yet? We’re not even close to being out the otherside. It is a painful reminder that we’re gonna be in danger longer after this moron leaves the White House.

So. Is Borat Subsequent Moviefilm a comedy? I think it’s too early to tell. There’s plenty of laughter, but under the surface of the shock reactions lies a deep river of despair. That’s an excellent sign for the importance of the movie. Again, it shows that moment of the zeitgeist was captured on film in an extraordinary way. But when friends tell me they howled with laughter through it, my only question is “How?”

I won’t soon shake the audience reactions of a rally crowd in the movie, filmed without their knowledge, chanting repeatedly with glee about how we should chop up all the journalists “like the Saudis do,” referencing the brutal execution and dismemberment of Washington Post journalist Jamal Khashoggi. Is it funny to know that a sweeping number of your friends and neighbors might feel the same because they got brain worms from the President and his performative culture war? It is one of many moments that I would hope more people reacted to with horror than with laughter.

There’s a sequence showing Mike Pence at the CPAC conference earlier this year, where he bragged about how there were only 15 cases of coronavirus in America and that President Donald Trump had everything under control. Currently, there are a quarter of a million deaths with no end in sight. Missouri has been spiking for weeks. Twice in the last week alone, the country has set new records for most reported cases in a single day. Is the cost of remembering how much they screwed us over a feeling you can put aside to laugh at a guy in a fat suit and a prosthetic mask?

And that’s why maybe we need a few years. Maybe we need to look back on this later to determine if this is funny or not. It’s important, but if no one learns anything—if everything keeps getting worse—then this is just watching the prologue of the end. Although if, say, everything changed in the next four years and folks pulled their head out of their asses, then sure: this is a wildly funny romp recording the absolute stupidest period in modern history and the individuals that fueled it.

It’s an ostensibly funny movie, but the mirror it holds up is heartbreaking and getting worse by the day. It’s a comedy, but only if everything changes.

To end on something more positive, the highest and least complicated compliment I can offer Borat Subsequent Moviefilm is that it perfectly inverts the original in one specific way. The prestige trick in the 2006 original was that the Borat character could light the smallest match, and if there was a gas leak, it would engulf the situation in flame. And that flame would show us just how shallow the darkness could be buried in our fellow citizens. This sequel doesn’t need to lean into that. Many of the subjects willingly and openly embrace the kind of identities that Baron Cohen would have needed to dig for in the past. I’d unneeded in a time when the worst of us are saying the quiet part loud.

Instead, the most effective moments in the sequel go a different direction. The highlights in the original showed people letting slip the darkest parts of their soul. It was shocking. The highlights in the new film are the rare characters who go out of their way to express love and kindness for, at best, abrasive strangers. For all the dire, dire shit, there are a few better angels of our nature left, and their empathy and care for others leaves me a little more wrecked with each viewing.

Maybe that’s funny after all.