If you read the Greeks—the ancient ones in linen tunics—you’ll encounter the term hamartia before long. In classical drama, it suggests a fatal flaw. Sometimes hamartia is a quality—pride, obstinance, indecision. Sometimes, it’s an innocent mistake. At Páros Estiatorio, it’s an interior window.

Her new restaurant, a partnership with her son, Klajdi Kreka, is named after the island of Páros, a gleaming sugar cube in the heart of the Aegean sea. The décor is about as close as you can get to the island without buying a plane ticket: white tablecloths, white walls, a white tray ceiling. White vases line a white shelf behind a white bar with white backlighting. In that clean-lined, streamlined environment, even the most sedate accents play like screams. A sprig of rosemary leers from atop a napkin. Meyer lemons cling to a potted tree in gorged clusters of naked sungold.

Am I making the dining room sound intimidating? If it is, it’s intimidating in a Cate Blanchett kind of way, all glamor and cheekbones and frost. At night, the vibe is sleek and romantic, candles warming up the cool tones. 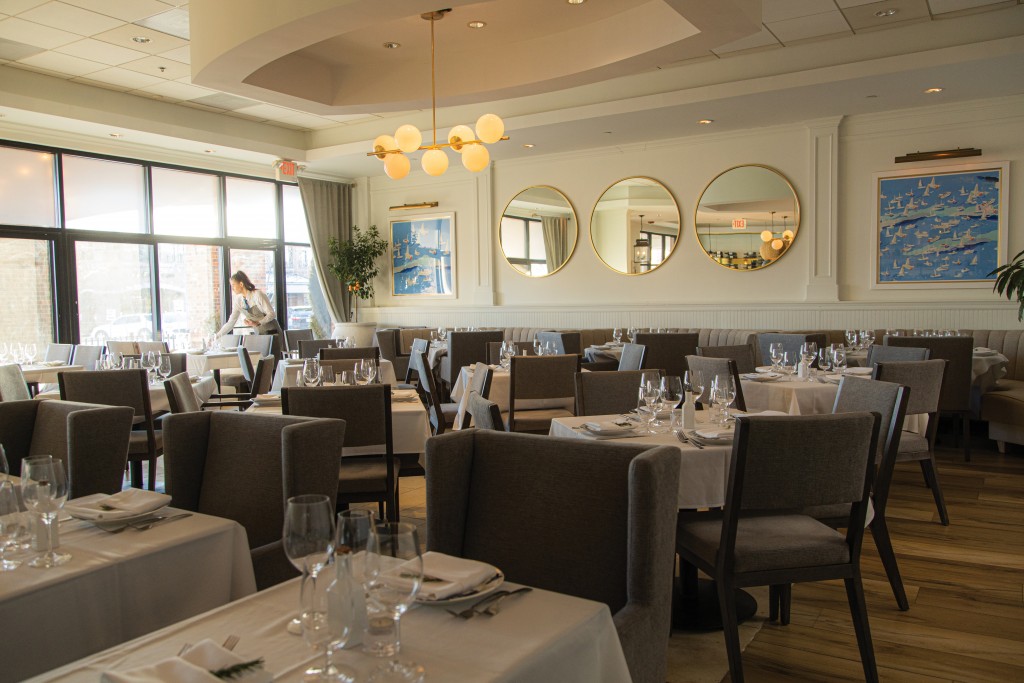 A dining room designed to evoke the stark white island of Páros. // Photo by Zach Bauman

The austere interior has another benefit—allowing diners to tune out distractions and focus on Kreka’s comfort-oriented cooking. At least, it would, were it not for the restaurant’s open(ish) kitchen, which bleeds hospital-bright fluorescents into the dining room through an enormous interior window. On my first dinner visit, I was seated as far from that window as possible, and it still pulled focus like a Times Square marquee. The resulting vibe was less “vacation island” than “zealous chaperone turning on the overhead lights just when things were getting interesting.”

This is a shame, because many of Kreka’s dishes are worth traveling for. Flambéed saganaki ($16) might seem like a tourist’s gimmick, but the fried wedge of sheep’s-milk cheese had a salty, nutty aroma every bit as interesting as the blue-tipped flames licking its edges.

I also liked the arnisia paidakia ($42 at dinner; $29 at lunch), salt-crusted lamb chops grilled to a precise medium-rare. They arrived with crisp patates tiganites (fried potato wedges) and a whole head of roasted garlic. I suppose you could mash the soft, sweet garlic into the meat and potatoes. But you could also squeeze the papery head like a tube of toothpaste and pop naked cloves into your mouth like candy.

The dinner menu has a small section of pastas—the tortellini ($26) with Spanish ham in a parmesan cream sauce was a worthwhile indulgence, if a bit out of step with the rest of the menu—but most of the dishes are segmented by provenance: “from the land,” “from the sea,” “from the oven.”

There’s also a small selection of sides, all of which are $7. The grilled broccolini was cold and bitter, with little else going on. I preferred the patates lemonates. The canoes of roasted potato were soft and tender, chastely but detectably lemon-ed.

Technique is rarely an issue at Páros Estiatorio; seasoning often is. The moussakas ($24)—a steaming casserole of ground beef, eggplant, and potato bound with béchamel—needed salt (and about 10 minutes to cool before serving). The same was true of the braised lamb shank ($34), which was fatty and sweet but bland. And the whole fagri ($32), a firm fish billed irresistibly as the “King of the Aegean,” had luxurious flesh but bitterly charred skin.

The pastitsio ($22) is a textural and architectural marvel, and one of your best bets at dinner. The béchamel was fragrant with nutmeg and bay, and the nest of bucatini noodles had been expertly troweled into a sturdy foundation for the Greek lasagna. Still, the dish needed a bit more zip—even some pepper—to wake up the flavors and nudge the dish from homestyle to haute.

Prices set expectations, and the two aren’t always in sync here. The “trio of spreads” ($17) felt a bit overpriced for what amounted to three small ramekins of tzatziki, taramosalata, and a grainy and tahini-timid hummus. Still, I might not have minded if all three of those spreads were the tzatziki, which was thick and creamy and dense with dill.

Where Páros excels is its cocktails, which absolutely live up to their price tag. I enjoyed the Greek Freak ($15), a smooth-sipping Metaxa-based drink with Greek mountain tea and citrus syrup. But my unreserved favorite was the Hydra Punch ($13). The drink was sweet but complex, with each element—dusky fig, Christmas-y nutmeg, tangy goats’ whey—detectable. 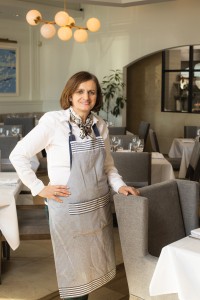 Wine lovers can choose from a globe-trotting list that ranges from $32 to $1200 per bottle, most with high markup (often more than three times retail). Still, there’s a good by-the-glass selection of unfussy and underrated Greek wines, and the servers are adept at describing them.

Service was attentive and thoughtful across my visits. Cozy came to our table to introduce herself warmly during a weeknight dinner; her son, Klajdi, stopped by to check on us at brunch.

Weekend brunch offers a more economical way to visit Páros. Most brunch dishes are in the $10 to $15 range, but you can also order from the regular or prix fixe lunch menus (the latter offers three courses for $26.95, which is a good value; many options are smaller portions of items available at dinner). The ambience is more pleasant at brunch, too, when cold daylight streams through the restaurant’s windows and softens the contrast with the kitchen’s fluorescents.

Still, I’m not sure even the staff are a fan of that kitchen window. When one brunch server caught me staring, she said, “It’s a real window! You can watch us get yelled at!” I laughed uneasily. “It’ll happen!” she chimed. I didn’t get the sense she was joking. 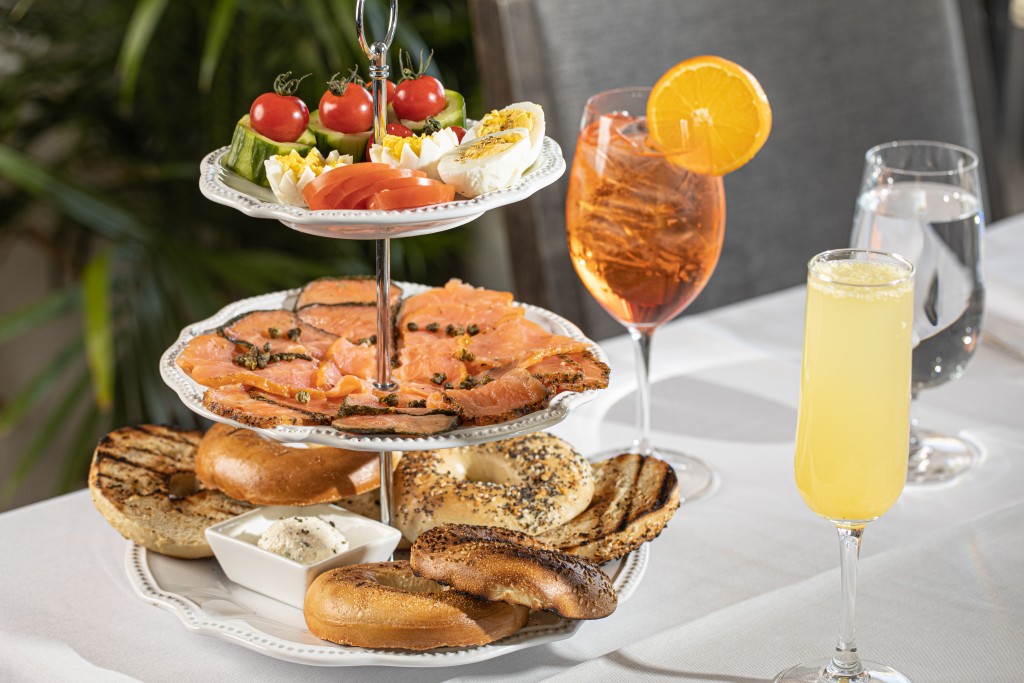 The brunch menu has some classic dishes executed well—crisp hashbrowns, a hearty Croque Madame, a rustic and crusty tartine. The novel options here are the “tiers”—three-tiered platters fit for a swanky tea room. One tier has croissants and prosciutto; another Greek yogurt and fruit. I ordered the Solomos tier ($28.50), which had a base of three toasted bagels (good, though not made in-house), a middle plate of smoked salmon and capers, and a crown of garnishes: English cucumber wedges, creamy hard-boiled eggs, wan, hothouse tomato slices. The menu promised “pickled red onions,” but they weren’t on offer. “It usually looks better than this,” our server winced when she brought it out.

I’m not sure I’ll be back to find out. I want Páros to succeed. The metro isn’t exactly swimming in high-end Greek food, and the restaurant is promising something different to diners. But the kitchen doesn’t always deliver—and when it does, it doesn’t always dazzle. At these prices, diners are going to expect some culinary jazz hands. And maybe a pair of sunglasses for that kitchen window.

Best bet: Come for brunch or lunch, when dishes are a little less pricey, and order the saganaki and the arnisia paidakia. In the mood for a drink? Hail (the) Hydra (Punch).