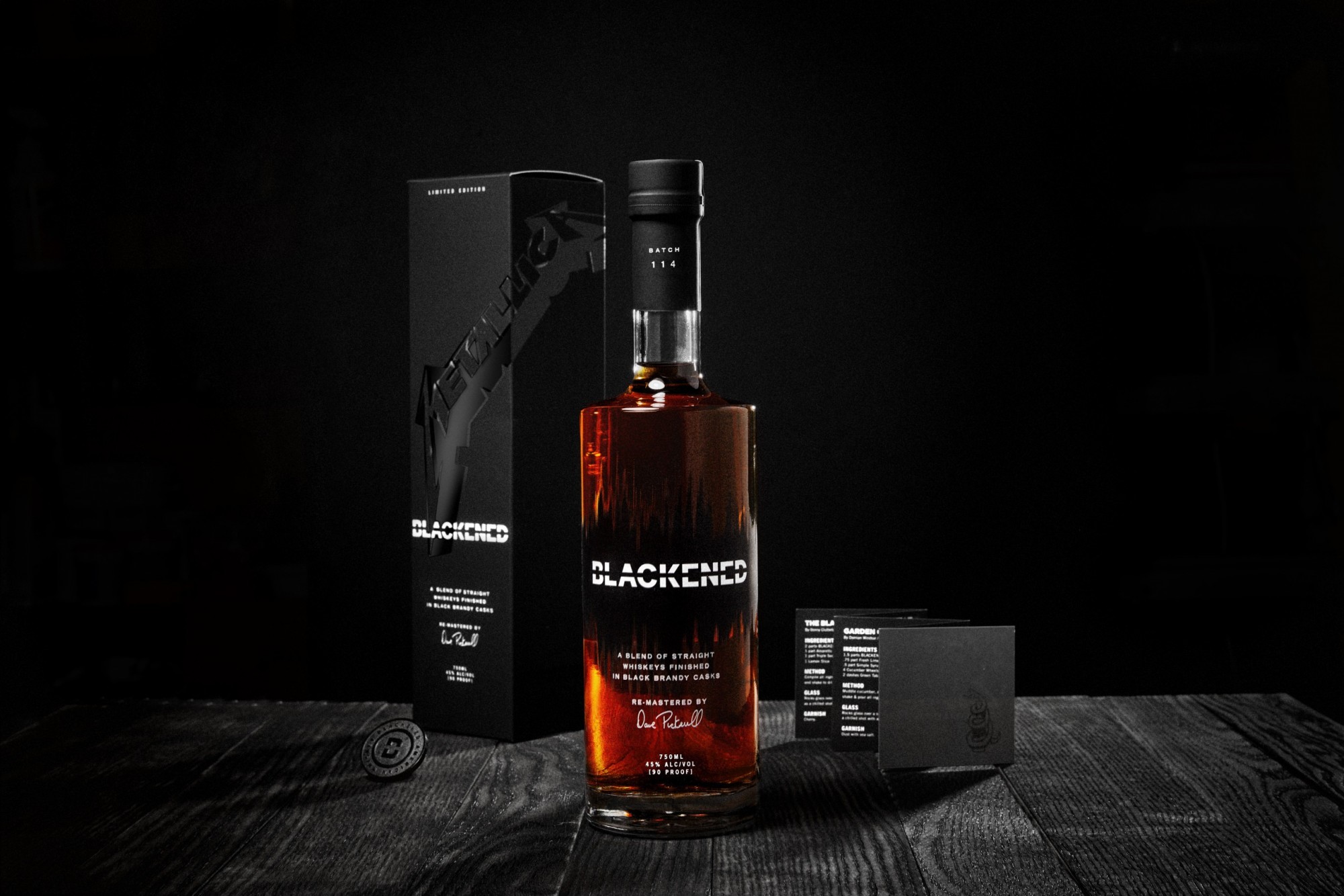 There have been numerous music-inspired booze collabs over the years. Be it Travis Scott’s Cacti hard seltzers, Snoop Cali Rosé from 19 Crimes, or Iron Maiden’s Trooper ale, whiskey and heavy metal go together like coffee and cigarettes. When long-running thrash titans Metallica launched their signature whiskey brand, Blackened, in 2018, they teamed up with Master Distiller Dave Pickerell—the man behind WhistlePig and other much-desired bourbons—to create a whiskey with a different level of musical interaction.

Using what they call “Black Noise,” the casks in which the blended whiskey are aged get bombarded with low-frequency sound waves from a playlist made up of Metallica’s songs. The latest batch, numbered 114, celebrates the 30th anniversary of Metallica’s self-titled release, aka the Black Album, and was aged using songs from that record. After trying a sample of the new batch—which has a pleasantly smoky beginning, mellow mouthfeel, and an almost caramel finish—I was excited to hop on Zoom to talk with the current Master Distiller and Master Blender, Rob Dietrich, to discuss how this whiskey is created.

The Pitch: I became aware of Blackened Whiskey with the release of Batch 100, where you put together that playlist and they turned it into a double picture disc to celebrate.

Rob Dietrich: I was pretty stoked about that. That was such a fun one: just to go down the Metallica rabbit hole in only 12 songs. In the first place, we were originally going to only release one record and Lars was going to curate those 12 songs down to six, but he liked all 12 songs so much, he’s like, “No, we’re going to release a double record.”

Each batch is aged using a playlist based off of a certain album. The new batch, number 114, is the Black Album, but for Batch 100, did you pick songs for particular sonic properties?

That was more songs that meant something to me. I think it was more of a personal journey, you know? Songs that I was listening to in high school, songs I was listening to in the army in deployments, and there were songs that reminded me of other friends. My sister is a huge Metallica fan, as well, and so, I was dedicating the songs to different people in my life as well as making sure I dedicated a song to Dave Pickerell, who was my predecessor who very sadly passed away in 2018. So it was a lot of fun. It was more of just that personal experience.

And then it occurred to me, we’re using Metallica music to sonically enhance the whiskey. It’s making these subtle changes, so wouldn’t it be cool if I picked some live songs, so you can hear the voices of the fans and it’s like, if you were at that show, now your voice was literally used in the sonic enhancement part of the process? I thought it was cool to tie, not just the band in, but the fans in as well.

You took over this project after Dave Pickerell’s passing. I can only imagine that that makes each time you go in and do a batch of Blackened an homage to like the person who came before you?

Most certainly. It’s certainly playing, paying homage to his legacy as well as bringing my skills to the table–finding that way to work together with Dave. This was his legacy whiskey. That was the last whiskey that he created. He had his hands in so many batches, so many different types of whiskeys, and so many brands that he helped start with people throughout the years, and this was one that he was on record as saying, this is his legacy whiskey.

You have been a distiller for quite some time, but this is only one aspect of a very storied career. How did you come to becoming a distiller after your time in the military, your time in concert promotion, and things like that?

The short answer is “motorcycles.” The long version or at least a less short version is: I met the original head distiller for Stranahan’s Colorado whiskey, and he had been working on his motorcycle to run off of the heads–which is the waste product from the whiskey. That’s a very high-proof waste product. At the time, my buddy and I had built a diesel motorcycle that we were running on vegetable oil. This thing had no title. It was a total rat bike. As a matter of fact, I shot the back fender with my .357. It was like, “It’s a rat bike. It needs a bullet hole.”

So, we were both interested in this alternative fuel and he said we should come down to the distillery, where the bike is. I said, “Wait, there’s a distillery here in Denver?” This was 2006 or 2007. And as soon as I walked in and I saw that 800-gallon copper still, I was like, “I want to know how to run that. I want to know how to make that machine work.”

I was fascinated. That’s how I started. I started working on the bottling line and then convinced them to add a third shift at night from 1 a.m. to 9 a.m. and that’s what they did. I did the night shift for four years straight as the night ninja, making whiskey at night—bottling, filling barrels, and doing all the behind-the-scenes work. I literally started from the ground up and just kept learning about the industry, learning about the craft, refining my palette.

The only way to do that is to drink other people’s whiskey, as well, not just your own, so it’s a lot of fun. 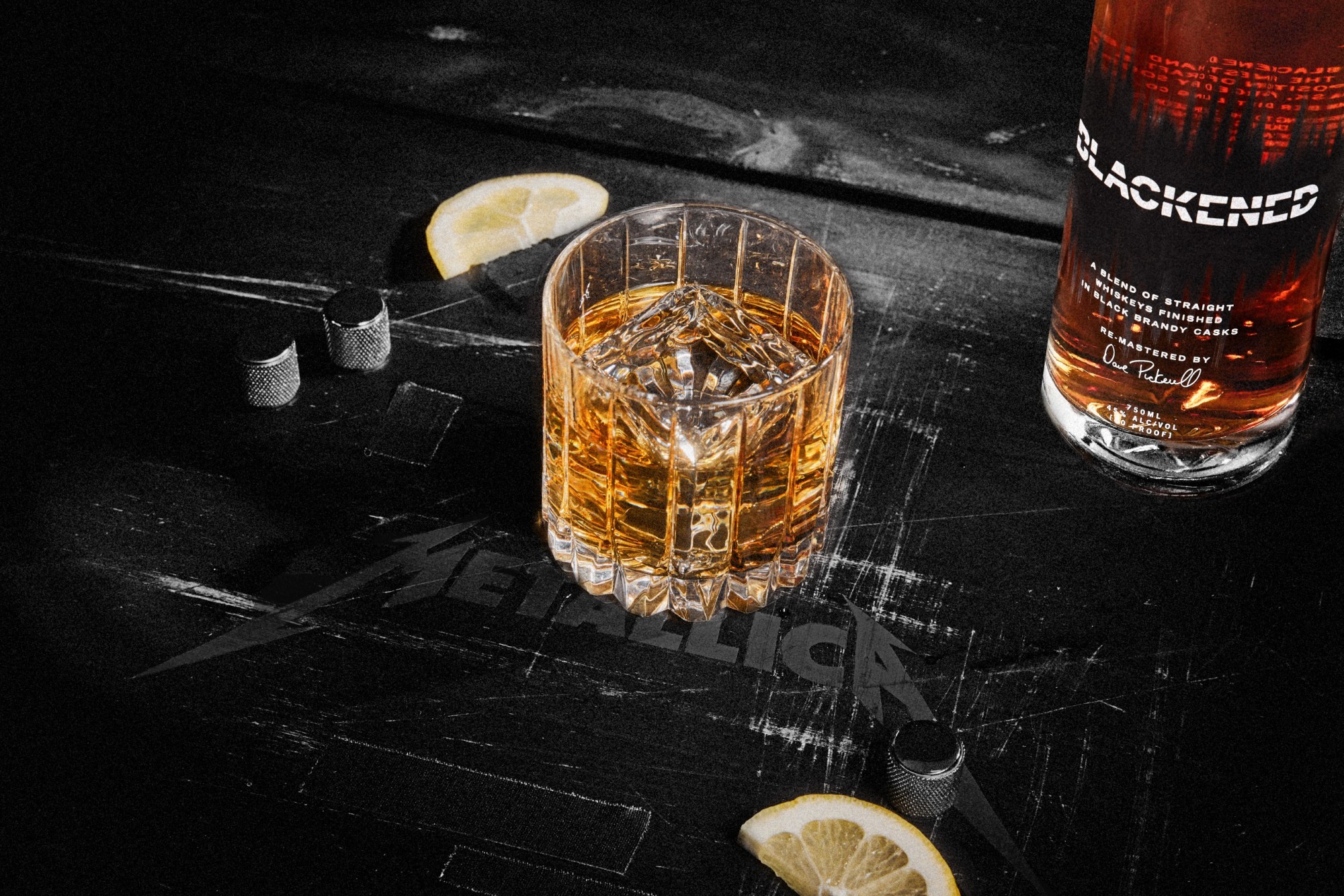 As this is a blended whiskey, I would imagine that coming-up aspect–where you’re refining your palette really–comes in handy when you’re going through and you’re selecting the various ingredients that will form the end product.

Yeah. I think the beauty of working with a blend and working with all these great whiskeys, it’s just like making a fine meal: you have all these ingredients that taste great on their own, but then when you blend them together or marry them together in a certain way, that creates this balance of flavor. That’s where the artistry comes in.

I think that’s what I’ve always been intrigued by and excited by–tasting a whiskey and trying to identify all the aspects of that whiskey. I had a theater background, right? In community theater. I always think of whiskey as a three-act play. You need a beginning, a middle, and an end. You need to draw someone into the story of the whiskey, and then, the middle is holding their attention, and then it finishes. You want to end with an impact that’s that is pleasurable or that you want to enjoy.

I think the art of blending is really something that Americans are starting to realize that there is significant attention to detail when it comes to blending whiskeys. The Scots have been doing it for years. They have a Master Distiller and a Master Blender. For us to be able to embrace blending, I think is something that the consumers really starting to appreciate and enjoy.

Whiskey is a very metal drink. Notably, Lemmy of Motorhead’s favorite drink of choice was Jack and Cokes, and so on. As a longtime Metallica fan yourself, for this particular batch celebrating the Black Album, what sort of aspects were you looking for to evoke that very hard rock version of Metallica?

First and foremost, my job as a master distiller and blender is to always maintain the quality and consistency of the whiskey. I’ll use the the batch prior to whatever batch I’m making as a control and I’ll taste it. What’s great about the limited-edition Black Album pack was allowing the music to make those changes, allowing this whole entire bad-ass record to create the added elements to an already great whiskey.

To your point–whiskey is as about as rock and roll or as metal as it gets and being able to actually use Metallica’s top-selling album in the Black Noise sonic enhancement part of the process is such a nod to their legacy nod to the whiskey’s legacy and just a really great way to go full circle, and bring whiskey and music together.

Notably, the Blackened whiskey is aged in brandy casks, which I find definitely imbues it with a certain sweetness. Was that a purposeful choice?

Tat was, that was something that Dave had come up with. He coined the brandy casts that we use, “black brandy.” It’s a Spanish brandy, and what I love about it—again, going back to that analogy of a three-part play is you’ve got the sweetness of the corn from the bourbon, the spiciness, and earthiness of the rye, and then all of this is balanced together with these undertones of dark fruit from the brandy casks. I really feel it just creates a beautiful, well-proportioned, balanced whiskey.

What does the distillery and the cask room sound like when this Black Noise process is being applied? I have to imagine it’s got some rumble to it?

It’s definitely got some rumble, but it’s such a low frequency, you’re not really making out words or making out the entire song, or the whole playlist. It is the low frequency, which is creating that movement. On the front of the Blackened bottle, you see the sound wave and you see the word “blackened,” then sound wave behind it. Not only is that an actual sound wave of James Hetfield singing the word “blackened,” but you’re looking at those peaks and valleys. With that sound, every time there’s a peak and a valley, it’s movement that’s happening inside the barrel at that low frequency.

The sound is definitely more subwoofer bass style. The company that creates the “Wall of Sound” for Metallica has created a proprietary device specifically for us. What I love about this is that we’ve got all masters of their crafts. You have Metallica, who are masters of metal. You’ve got Dave, who’s a master of whiskey—and now, myself who is a master of whiskey. Then, you have these masters of creating these incredible instruments and this incredible sound equipment and they helped us create what we knew what we wanted. They helped us create that.

I thought it was just a really cool aspect of getting all these professionals in the same room and really doing something completely innovative that the whiskey world really hasn’t seen much of. There’s people who play music to their, to their whiskey barrels or to wine barrels, but I feel like this was the first time where someone had really approached it with science in mind. It was really exciting.

So yes, there are some sound aspects to it, but it’s not like we had a live concert.

What’s your favorite way to drink this whiskey?

I’m kind of a purist. If I’m sipping it and I’m trying to identify flavors, I’ll drink it neat with just a little dash of water or filtered water. I definitely like whiskey rocks. Jokingly, I call that my favorite cocktail. That’s about as much as I want to mix into it, but I there’s a lot of great cocktails out there. One in particular, very summery cocktail is called the Horsefeather: ginger beer, bitters, and an orange wheel–and whiskey, of course. Blackened whiskey.

Blackened Whiskey’s Batch 114 is available now. You can find local retailers or purchase it online at the Blackened website.