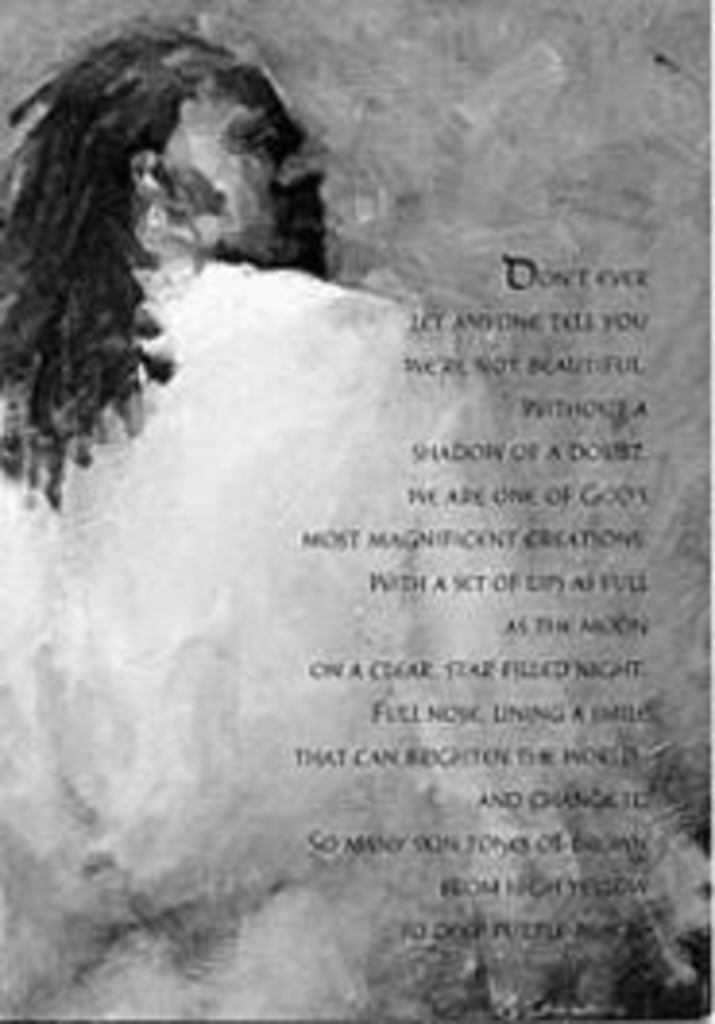 Home for him was Hallmark, where in August 1999 he had become the first full-time African-American male writer on the company’s payroll. (The company already employed a black editor and black freelance writers.)

Hallmark hired Barnes soon after he graduated from Jackson State University in Mississippi. And after only 6 months on the job, he earned a rare honor: A photo of Barnes was printed on the back of one of his cards. The design also featured Barnes’ name on the inside, an accolade usually reserved for prominent poets.

Set against a blurry painting of a dreadlocked black man garbed in white, the words are proud, the tone stately: Don’t ever let anyone tell you we’re not beautiful … with a set of lips as full as the moon … full nose … so many skin tones of brown, from high yellow to deep purple-black…. When we see other people of color we smile … because we see ourselves.

But Barnes didn’t see much of himself around the office.

When he arrived at Hallmark, Barnes had expected to find a staff of African-American designers and writers working on the Mahogany imprint, a line of cards tailored for black consumers. Instead, he found a white art director, a white editorial director and white writers.

“That was a huge shock to me,” Barnes tells the Pitch. “When you make a line of cards specifically targeted to a certain demographic, there is a distinct voice that can only come from people who have themselves lived through the experience. That is not to say that my white coworkers weren’t writing beautiful Mahogany pieces, but what I didn’t see was an influx of African-American writers getting a chance to express their own experiences or to be writers, period. We would be in editorial meetings consisting of every writer, editor and editorial director in the company, about 100 strong, and each and every time, I was the only African-American man in the room.”

Hallmark introduced its first greeting cards for black consumers in the 1960s, but it didn’t launch a full-fledged line until 1987, when it unveiled Mahogany as a 16-card seasonal offering. Now, with more than 800 options, it’s the largest card catalog marketed to African-Americans.

According to Black Enterprise magazine, Mahogany’s customer base is 80 percent black, and ethnic consumers purchase nearly 33 percent of all greeting cards, with African-Americans spending about $610 million annually.

Green put the Mahogany line in perspective at a Colgate-Palmolive convention in February 2000, where he debuted “Quest for the Best,” an exhibit that depicted the evolution of African-American imagery on Hallmark products since the company’s founding in 1910. He repeated the presentation at Hallmark in May of that year.

“Hallmark had been producing African imagery on social-expression products since it first opened,” Green tells the Pitch. “They were very derogatory initially, and these images were intended for a white audience. I wanted to convey that Hallmark did that kind of product because it was relevant for its consumers at the time.”

Green says his employers recognized that he was spinning negative images into a positive presentation. However, soon after “Quest for the Best,” he was demoted several times; he eventually resigned.

“That presentation sealed his doom,” Barnes says. “He found all these blackface, pickaninny minstrel cards with broken language, like ‘I sho’ does wanna wish you a happy birthday.’ He pointed out that Hallmark has cards like this on file, and people wanted him out.”

Barnes was one of the first employees company officials asked to participate in the Hallmark’s Writers on Tour program in late 2002.

So when his wife graduated from the University of Kansas’ medical school in May 2003 and had a hard time finding a residency position in Kansas City, Barnes had to make a difficult decision.

Barnes’ wife had a solid job offer in New Orleans, and the couple chose to move. He says he left Hallmark and his $42,000 salary in good standing, with several successful cards still in print. His coworkers sent him off with an office party; several current employees who asked not to be named confirm that he received a fond farewell.

But as Barnes would learn in Louisiana, “There isn’t much work for an ex-greeting-card writer with no other experience.”

After loading trucks and working as a substitute teacher in New Orleans, Barnes was excited when his wife was offered a family-practice residency back in Kansas City at KU Medical Center. After only 7 months away, he believed he could return to Hallmark. He says he’d been told on numerous occasions that there was a revolving door for ex-employees in the creative department.

“I had seen people leave five and six times, only to return and assume their old positions,” he says.

This seemed especially true for minority employees. A July 1999 Kansas City Star article about minority hiring reported that Hallmark “stays in touch with employees who have left, hoping to one day woo them back.”

But Barnes’ former writing manager and editorial director and the vice president of the creative department didn’t return his calls. Eventually they declined to offer him a position, citing his decreased productivity between January and May 2003 — the period after he’d been away from work on the company’s Writers on Tour expedition.

Then, Barnes says, he watched the door open for a former coworker.

“She had been there a year and a half, a middle-aged, middle-class Midwestern white woman,” he says. “She left and went to Indiana, got married and had to come back. She wasn’t gone for more than 3 months.”

Barnes doesn’t think racism kept him from getting back his old job — instead, he attributes his misfortune to racial bias. “There’s a difference,” he says. “People feel more comfortable with people they can identify with. It really wasn’t a hostile environment, but there was a lot of ignorance.”

A Hallmark spokeswoman declined to discuss Barnes’ situation, saying, “As a matter of corporate policy, we do not discuss employee issues.” Hallmark has 5,000 employees in Kansas City, 800 of whom make up its creative community of artists, writers, photographers and designers. She says minorities make up 11 percent of the company’s local work force.

But Hallmark doesn’t appear to need too many black card creators. That’s because, the Hallmark Web site explains, “the Mahogany creative planning team conducts extensive research to develop a strong commitment to and understanding of African-American culture, tradition and heritage.”

Barnes witnessed some of that “extensive research.” Barnes recalls that the creative team was encouraged to look through issues of Jet magazine and tune in to certain TV shows and radio programs. “Sadly enough, the images that many white Americans get of African-Americans … come from BET, movies and the news,” Barnes says. “It’s as if we’re caricatures, not real people.”

In a scene reminiscent of Chappelle’s Show (which might be a Mahogany must-see), Barnes says he was often approached by a coworker eager to test-drive his street slang.

“He would come ask me about it, talking jive,” Barnes says. “I was like, ‘Get the hell out of my face.’ I don’t talk like that, and we never talk like that in my household.”

Though they were up-to-date on their disses and their Missy, Barnes’ coworkers often were stumped when it came to African-American expressions without hip-hop overtones, he says.

“We were working on a thank-you project for Mahogany, and one of my suggestions was to have two masculine hands clasped in a handshake,” Barnes says. “On the inside, it would read, ‘Good lookin’ out.’ It took them a year to OK that one simple line, that common phrase.”

Dierdra Zollar, an African-American writer who participated in this year’s Writers on Tour, shared a similar experience with The New York Times for a story published April 11, 2004. “Occasionally, there are cultural references that people don’t understand,” she said. “I had brought in a photo of a woman with an African-inspired hairdo twisted in Nubian knots. The designer was an older Caucasian woman. I showed her the photo and suggested we design a card about friendship with the message, ‘We’re tight like that.’ She looked at me blankly and said, ‘I don’t get it.'”

Hallmark continues to employ black writers such as Zollar. But, Green speculates, “Hallmark does not like black men, especially black men who are vocal.”

So Barnes still has his three jobs in New Orleans, where his wife works at a hospital.

“Hallmark had no problems with my productivity when they wanted me to do interviews to prove to the outside world how diverse it was,” Barnes says. “I feel so stupid allowing myself to be used like that.”