Eric Pennycoff gifts audiences with a demented extravaganza of holiday horror this Christmas season. The Leech follows father David (played by Graham Skipper) as he generously houses two down-on-their-luck non-believers, Lexi (Taylor Zaudtke) and Terry (Jeremy Gardner), in the spirit of giving. As Father David seems to be making spiritual progress with the couple, the household begins to spiral in madness in the trio’s newfound codependency.

The Pitch sat down with director Eric Pennycoff and actor Graham Skipper to unravel these terrifying yuletides of Christmas.

The Pitch: Eric, you worked previously with actors Jeremy and Taylor on your most recent movie, Sadistic Intentions. But what was your intention in striking like this bold new direction for your latest movie, The Leech, and how did Graham fit into that picture?

Eric: Well, I think the characters of Lexi and Terry in this you know, it’s Jeremy and Taylor Gardner. They’re married in real life. In my first movie, they played two people that did not know each other in this film. They play a real couple, but I will say that compared to my first movie, these characters are very much in your face. I think writing something that’s just sort of out the gate, intense and funny and sort of non-stop making father David’s life a living hell was something that was both fun to write and fun for them to do because it was definitely different from the first thing that we had done together. Certainly my first movie kind of builds towards Jeremy losing his mind and going crazy. But in this one, he’s pretty much the wild man right out the gate. So I think it was a nice change of pace for them, but at the same time, they were able to bring the charisma that I think they have so naturally into this.

The Pitch: What was your approach in working with the actors in such a limited space?

Eric: We made this movie during the pandemic. So there really was no in-person rehearsal time, so much of talking about these characters and kind of going through the script was very much like we’re doing right now, which was over the computer. And I think we talked a lot about preparing this in a way that we could maximize time. As we’re used to giving the actors the time resources that we had, and certainly with the pandemic going on. Everyone on this film knew each other. There were only a handful of people that had maybe not met in person, but really everyone from the cast or the crew had maybe worked or known each other one way or the other. So I would extend working with the cast even to working with the crew, which was 10 people coming into a bubble having not done much of anything since the pandemic started.

Graham: [The confined space] totally colored the experience. This was in the midst of the pandemic. This is before there were vaccines. For a lot of us, it’s the first time that we were out of our immediate family and trying to get back to what you know, was normal. And so I think throwing us all together into this really intense scenario just helped to build up all the tension and emotions that are present in the script was just super fun. It was fun to kind of be back to normal, to be back with friends. I’ve been friends with a lot of these people, certainly with Eric and with Jeremy and Taylor, and making new friends. You know, because we’re all living in the same house together trying to just try and get this movie made. It was definitely the truest form of guerilla filmmaking. That’s my favorite kind of filmmaking. And I think it really helped to make the movie as successful as it is.

The Pitch: What challenges did you face during production with consideration of the pandemic?

Eric: A lot of us have been making small movies forever. We’re looking around at each other saying “Why don’t we make a movie you know?’ Modestly sized movies are saying everyone needs to learn how to make smaller movies with fewer people, less money. Us true indie filmmakers, even micro-budget filmmakers, felt like this is the world that we kind of existed in before the pandemic. So if we can just do it in a way where everyone is safe, and we really sort of bubble the thing together, and no one leaves, then I don’t feel as though it’s any really different than making a movie before the pandemic.

I think that was really something that also added to the focus of the film on top of all of us really just being excited to make a movie because no one really knew what the future of filmmaking looked like.

I think so many of the parameters that made that what it is, it’s kind of what makes The Leech what it is and it gave us the courage to try everything and not really be afraid of something kind of being too crazy.

The Pitch: What’s the big meaning behind most of the Catholic religious symbolism within the movie. Was the take home message somewhere between the Bible verse lines, or was it just a source of father David’s delusions?

Eric: There’s a million different stories you could tell based on the range of things that you would read in the Bible, Old Testament, New Testament. The trajectory that took place in this [movie] was starting with the good intentions of the New Testament, which most Christians or Catholics will tell you is the only Testament. Even some of them will say the Old Testament is a little crazy. And then as father David slowly loses control of his life, he sort of reverts to the teachings of the Old Testament, and I think that’s where things kind of kind of get out of hand. Graham and I both have our own religious backgrounds independently that are different in a lot of ways, but similar and others and you know, we talked a lot about that going into this and I, you know, there was no one else that was being considered for this role. I was talking to Graham Skipper about this role and so much of our early conversations and formed a lot of were later drafts of the script one as well.

The Pitch: And what are those religious backgrounds?

Eric: I was raised Catholic from grade school, high school, even my college. So I feel as though I’ve been surrounded by you know, priests and nuns and these types of religious figures for you know, easily the majority of my life. 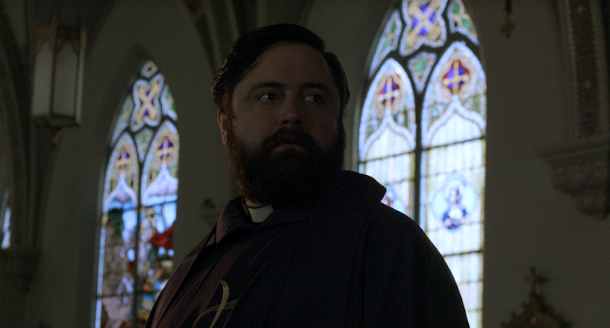 Graham: I grew up in Texas and you know, one of the first questions people ask you is, “Oh, what church do you go to?’ And so I definitely grew up going to church. Church is actually a pretty important part of my life. Growing up, I mean, I was president of my church, youth choir. And then I ended up going sort of by happenstance to a Catholic University. So I’ve been really surrounded by religion my whole life. I would not call myself a religious person now. But there’s definitely a lot that gets just totally baked into your DNA. And I think that really helped Eric and I to kind of figure out where father David’s was coming from and a lot of these issues.

The Pitch: Were there any specific memories or aspects of growing up in those backgrounds that you intentionally put into the movie to make it more authentic?

Graham: I remembered how the Christians that I grew up with, really did sort of say, ‘well, the Old Testament? You can sort of ignore that, it’s all about the New Testament.’ There was a whole lot in the script where we’re Terry is really enamored with the Old Testament, with the violence and the bloodletting and the intensity of the Old Testament. I think that father David would really try to emphasize that Terry maybe doesn’t quite see the differentiation. He’s like, ‘Well, the Bible is the Bible.’ I find that fun to play with that idea of like, well, yeah, the Bible is the Bible, and how can we pick and choose what we believe and what we don’t? And so that was that was a little moment that I remember Eric and I specifically talking about. Just something that came from my experience going to Sunday school and stuff as a kid.

Eric: I can remember growing up in the church. I’m not religious now, but even early on kind of looking to your left and looking to your right and saying, there’s a lot going on with this religion, and you’re telling me that we can kind of pick and choose? It was always a bit strange to see this text that had this first half that you were kind of supposed to take with a grain of salt and then the second half is what you really pay attention to. So that’s fun to play with narratively, and when you hand a book like that to a character like Terry, who’s really a sponge for everything that’s coming at him, and you don’t tell him what to really focus on. At first, you know, he’s just going to open up the first page he sees and just take it at face value. I think that’s probably the only real specific thing I can say that I can recall from my childhood that was always a bit fishy was the idea that you’re kind of picking and choosing what this text means I would say that that probably goes for the majority of religions that a lot of people are making up and what they did.

The Pitch: What are you guys most excited about this movie for audiences to see?

Eric: Well, I will say, you know, pretty want to get a Blu ray which I highly recommend. It looks great. There’s a bunch of special features from arrow that are just amazing from a music video we shot with Rico to a totally insane behind the scenes feature that we shot as far as the movie itself. I mean, I hope that people just you know, cozy up by the fireplace with a loved one and you know, maybe pour a glass of whiskey and kick back and watch The Leech.

Graham: Yeah, I mean, I’m, I echo that, you know, I’m just excited for people to get in the Christmas spirit. With this super wild movie and have a fun time with it. I guarantee you, you’re going to be entertained, and Christmas may never seem the same again.

Eric: It will not.

The Leech is streaming on VOD now.