Between the Lines, at the Rep, dazzles but doesn’t go deep 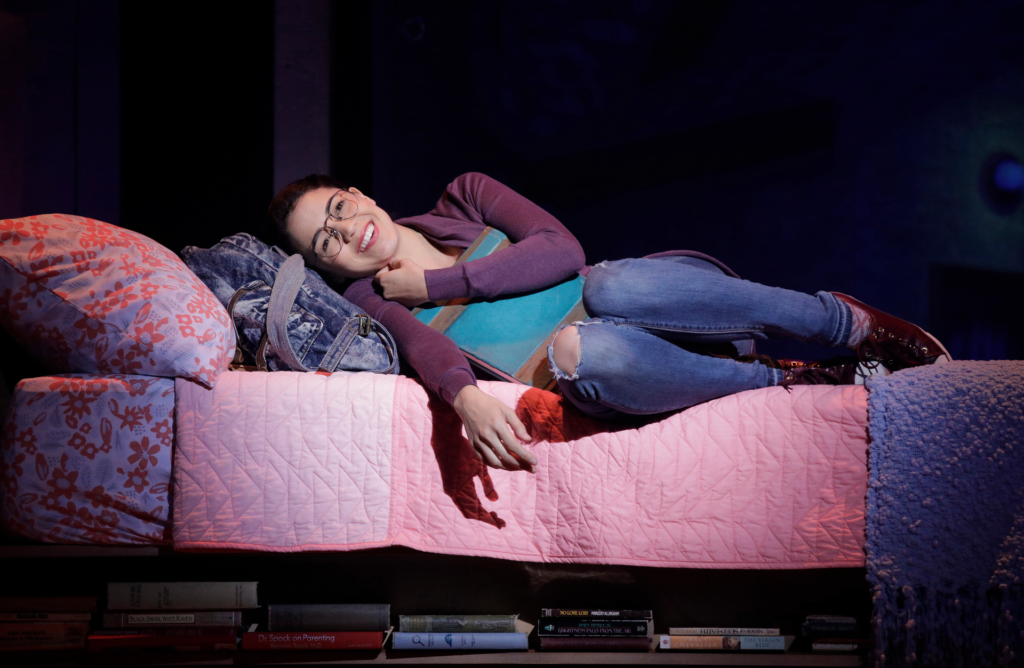 Let me dispense with the obvious: If you have any bookish preteens in your life, you should stop reading this review and take them to Between the Lines, the energetic and stunningly mounted pop musical now playing at the Kansas City Repertory Theatre.

The world premiere, based on books by Jodi Picoult and her daughter, Samantha van Leer, has given the Rep a good excuse to muster one of the most impressive design teams (and likely one of the steepest production budgets) in recent memory. But the show’s style occasionally eclipses its substance, thanks to an uneven book and a few tepid tunes.

The show opens with an introduction to Delilah McPhee (Arielle Jacobs), an unpopular high school student tasked with making new friends in the wake of her parents’ messy divorce, which has uprooted her and her mother, Grace (Shanna Jones). The first number, “Another Chapter,” is an ideal introduction to Jacobs’ rock-steady voice and to the musical’s hopeful view of young-adult angst (music and lyrics by Elyssa Samsel and Kate Anderson). When school gets tough and her mom gets distracted and cranky, Delilah just grabs a book and turns the page. With books, she’s never lonely.

Literally. While she’s reading a fairy tale for children one night, the swaggering Prince Oliver (Curt Hansen) breaks through the page to talk to her directly. He’s tired of kissing the same dull princess and performing the same heroic feats every night — he’s dying to come into Delilah’s world and write a new story for them both.

The Rep’s cast is strong, with a few New York imports mixed in with familiar local faces. Jacobs is endearing as Delilah, striking a natural tone that contrasts perfectly with the outsized antics of her fairy-tale friends. Morgan Siobhan Green exudes cool as Delilah’s more confident friend, Jules (with pipes to match). And Danny Gardner steals the show as supporting player Frump, a half-man, half-dog, all-hangdog mooning over Princess Seraphima. Gardner’s athletic tap performance in “Out of Character” was the opening-night highlight, despite sound issues that muffled his strong voice.

The local players turn in some of their finest work to date. Emily Shackelford’s Princess Seraphima is physically precise and rich with comic detail. Shanna Jones’s Grace strikes a delicate balance between beleaguered mom and bitter divorcee. And Julie Shaw makes indelible impressions in small roles as biology teacher Mrs. Brown and the magical book’s author, Jessamyn Jacobs. But the prize for surprise goes to Tim Scott, whose truly goofy performance as the butterfly-mad, not-so-villainous Rapskullio has reset my expectations of the actor’s range.

The storybook world of Between the Lines requires quite a bit of theatrical magic to stage, which the Rep has in spades. Projection designer Brad Peterson sends his sumptuous story-book pages onto a scrim, behind which carefully lit actors strike tableaux to serve as “illustrations.” It’s a simple idea ingeniously executed — a fair synthesis of the production design overall. And director Jeff Calhoun stages it smartly, keeping Delilah and Oliver in distinct areas of the stage even as they play and sing together in scene.

Calhoun has a strong assist from scenic designer Tobin Ost, whose cascading set (framed in books, of course) is full of plot twists and surprises. Hidden doors, adjustable floor sections and set pieces on wagons enable rapid-fire scene changes and dynamic playing areas. Choreographer Lorin Latarro exploits these to brilliant effect — each song has its own visual language, but the movements add up to a coherent style.

Less coherent: a few of the show’s lyrics and much of Timothy Allen McDonald’s book, which shifts creakily between sharp observations on young adults and overplayed notions that seem unlikely to appeal to them.

Some of the show’s teen lingo (“hashtag epic fail,” jokes about “Netflix and chill”) already feels dated and a little too “how do you do, fellow kids.” And its reliance on familiar tropes has a tendency to flatten otherwise appealing characters. I’m thinking in particular of librarian Ms. Winx, played with gentle authority by the charming Judy Simmons. After a riveting introductory scene, she’s quickly reduced to caricature — we learn about her six cats and her insatiable post-menopausal sex drive. I’ve seen this character a few too many times; I suspect media-savvy teens have as well. 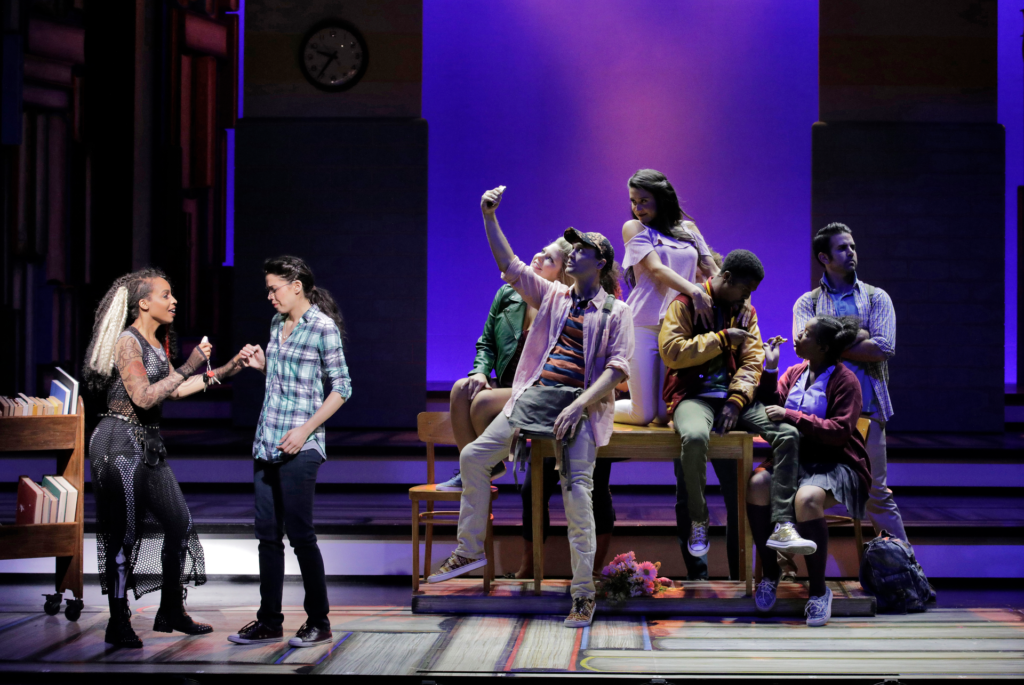 Another problem: The show’s gestures toward “wokeness” often feel perfunctory instead of genuine. Delilah accuses a counselor of “mansplaining” in a context so strange and abrupt that it comes off mean-spirited. Near the end of the play, a character delivers a few well-meaning but superficial lines about preferred pronouns that sound unnatural in both the actor’s mouth and to the character as written. We need more trans characters onstage, but we don’t need their identities to be afterthoughts or Big Reveals.

The show’s biggest miscue may be its time-traveling epilogue, which seems both unearned and predictable. The finale number adds to the confusion, with an after-school-special tone that feels more geared to a middle-grade audience than to one of high-schoolers. (One bright spot: The epilogue rejects the “evil popular kid” ethos, reminding us that adolescent jerks occasionally grow up to be better-adjusted adults.)

Of all the show’s messages, its strongest may be its Hobbesian insistence that high school is nasty, brutish — but short. Escapism, the musical reminds us, is a temporary balm for a temporary wound. Delilah’s challenge becomes keeping that brevity in mind. On that point, the lyrics and dialogue ring clearest.

Between the Lines is a dazzlingly polished production, with star-power performances and moments of authentic theatrical magic that will awe even the most hardened old-timers. And a few songs are ready for the big time — my votes go to “Another Chapter” and “In My Perfect World.” The success of recent teen-centric musicals such as Dear Evan Hansen may augur an enduring future for it onstage. But for this show to match Hansen’s popularity, it first needs to reflect its more nuanced view of teenage life.