Best of KC 2020: All the Web’s a stage: Theaters evolve in a pandemic 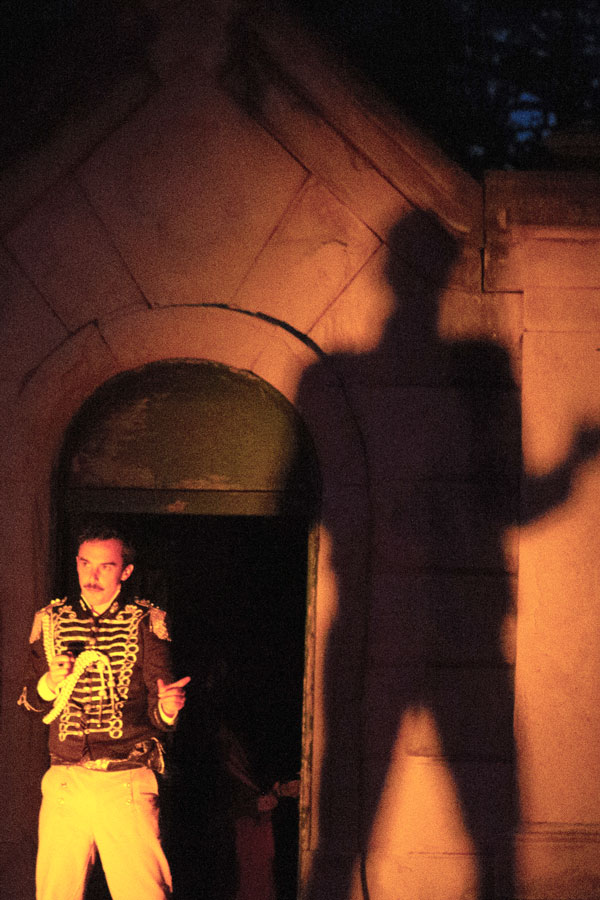 R.H. Wilhoit (as The Confidant) in The Coterie and Union Cemetery Historical Society’s co-production of Electric Poe. // Photo by Jordan Spatz and courtesy of The Coterie Theatre.

The recorded buzz of a preshow crowd arouses anticipation, as an onscreen timer counts down the final seconds to the start of a play—on Zoom. Months into a pandemic that has left stages dark, theater companies are cooking up a host of online content to keep themselves viable and their audiences nourished. Delicious content has been shared this year, not just from far-off locales but from local venues.

It began in the spring. Kansas City Repertory Theatre streamed its two OriginKC: New Works Festival productions, filmed on pre-shutdown opening nights. Then, KC Rep artistic director Stuart Carden kept conversations going with a weekly “Thursday Night Mixer” with local artists (and cocktails) on Facebook Live, later posted to YouTube. Actor R.H. Wilhoit conversed online, too, in a series he called “Hollis Makes a Phone Call.” Kansas City Actors Theatre took to the airwaves with its podcast, Kansas City: Actors, Theatre, then with the weekly Kansas City Actors Radio Theatre, in partnership with community-radio station KKFI 90.1, that debuted in October with serial drama Kansas City: 1924 by Forrest Attaway and other “classic radio plays.” Musical Theater Heritage put “education experiences” online and posted a podcast, The Peanut Gallery, before streaming a five-camera recording of its historical and moving 2016 revue Songs of the Great War in late May. The “desperately needed ticket revenue” from that production not only benefited MTH but also its artists. And the programming benefited us.

With a masked backup band and COVID-19 precautions, MTH went on to multicamera-record its Musical Monday and Tuesday and An Evening With Rodgers and Hammerstein for our virtual pleasure. For Black Repertory Theatre’s Virtual Cabaret—a mix of talk show and performance that streamed live on Facebook—artistic director Damron Russel Armstrong added online-MC finesse to a talent-filled, hours-long fundraising shindig. The KC Fringe Festival became “Fringe Online,” going virtual in July with 35 performances available for streaming in the safety of home. The Coterie took its acting program online, then joined with companies of Theatre for Young Audiences across the country to co-produce a virtual production of A Kids Play About Racism in August. Unicorn Theatre posted “Quarantine Confessions”—short online morsels written and performed by local actors and writers—to its website, then opened its 2020-21 season with the streaming of the Zoom-filmed Kill Move Paradise, and a new-play reading that streamed on YouTube.

It doesn’t end there! Quality Hill Playhouse, KC’s “classy cabaret,” moved to its Facebook page with the series “Tonight at the Q,” presenting artistic director J. Kent Barnhart on piano with a soloist, socially distanced. And its wine-dinner fundraising gala, “Encore: At Home,” was available to stream near the end of October. KC Molière: 400 in 2022, a group celebrating KC’s French heritage and Molière’s 400th birthday in 2022, in partnership with KC’s monthly Sunday Script Circle, held a full-cast Zoom reading of a new translation of The Miser in July. Even Wi-Fi hiccups didn’t diminish this live effort. Heart of America Shakespeare Festival postponed its summer show until (we hope) 2021, then put its acting classes on Zoom and a “Shakespeare at Home” performance on YouTube. KC Public Theatre has gone virtual with its Theatre Lab, and shares its Facebook stage with one-minute video submissions (its Soapbox project).

What will theaters serve up next? A few offer offline, outdoor performances, socially distanced, while weather permits. With seasons on pause—Spinning Tree, Starlight, Forge Rep, Black Box, et al.—all keep a place at the table. And we return, repeatedly, to their varied menus and work up an appetite for more.