Baskets comes out the chute again, Isabelle Huppert fans are having a big month, and Sing Street hits Netflix 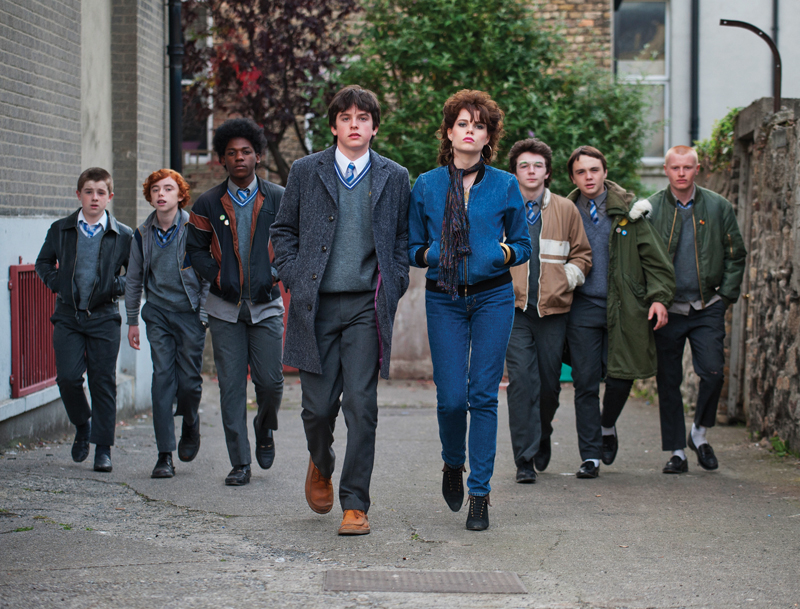 “I don’t think clowns are needed as much since the world has become so clownish,” says Zack Galifianakis in the trailer for Season 2 of FX’s wonderfully eccentric comedy Baskets.

This is of course coming from Paris-trained, routinely shat-on rodeo clown Chip Baskets — a role so ridiculous on paper that only Galifianakis’ exquisitely deadpan delivery could ever make it work. Louie Anderson won a well-deserved Emmy for playing the sympathetic mother of Chip and his twin brother, Dale (also Galifianakis), in the first season, and I couldn’t be more excited for the show’s return tonight on FX. Watch it for some reliably uncomfortable laughs — a kind of prelude to tomorrow morning’s completely different brand of uncomfortable laughs in front of the U.S. Capitol.

Any fan of B-movies knows Joe Bob Briggs. The comedian and author has been celebrating the best of the worst on TV and in print since the 1980s. Tonight and tomorrow, he’s at our Alamo Drafthouse, hosting screenings of two of that decade’s cultiest movies. Tonight at 10 (and in 35mm!) is 1986’s The Texas Chainsaw Massacre 2, the divisive, gory, intentionally hilarious sequel that Tobe Hooper never wanted to make. The director made the best of his resistance, casting Dennis Hopper, amping up the cartoonish violence and getting politically subversive. Originally hit with an X rating, the film was released “unrated” and died a quick box-office death. Tomorrow night at 10 is Night of the Comet, a strange 1984 apocalyptic flick in which two teenage girls sport machine guns, go shopping and kill zombies.

If you’re the kind of filmgoer who adores slow, character-driven movies with lots of small, beautiful moments, Jim Jarmusch’s Paterson, which opened yesterday at the Tivoli, may be right up your alley. Adam Driver displays effortless charm as a New Jersey bus driver named Paterson living a quiet, fulfilling life with his wife, who encourages him to continue writing poetry. Inspired by William Carlos Williams, Paterson is an astute observer, and Jarmusch’s film observes him. So there’s not much in the way of traditional plot movement or action. But the little moments certainly add up to a moving portrait of human decency, even if it’s also a bit too precious.

A little less than a year ago, I wrote this about Where to Invade Next: “Michael Moore’s new doc finds the agit-prop provocateur traveling abroad to ask questions in countries that lead the world in low crime rates, good education and free health care. He knows all the answers, of course, but its still brisk, idea-rich entertainment.” All of that is still true, but watching the film now, you feel a new urgency. With progress being rolled back in almost every definable category, it’s easy to be despondent. Don’t be. Where to Invade Next is newly streaming on Amazon Prime today. Watch it and get fired up to fight for the principles our country was actually founded upon — not the way they’ve been twisted by hatred and fear lately. It ain’t gonna be easy.

It may be a slick piece of Hollywood entertainment, but The Founder is also a lesson in contradictions. A profile of Ray Kroc, the milkshake-machine salesman who bought and brought McDonalds (and the entire fast-food industry) to international prominence, this movie celebrates the American entrepreneurial spirit even as it reveals its dark side. Kroc doesn’t go to Gordon Gekko “greed is good” levels — as embodied by Michael Keaton, he’s inherently likable — but he manages to drain the passion and purity out of a revolutionary concept that was originally created by Richard “Dick” McDonald (Nick Offerman) and Maurice “Mac” McDonald (John Carroll Lynch). The Founder is way more entertaining than any movie about McDonalds has any right to be, and it opened in KC theaters Friday.

If you’re still basking in the glow of Isabelle Huppert’s powerhouse, Golden Globe–winning performance in Elle, you won’t be surprised to find out that Huppert is the main reason to watch another new movie. Things to Come is French writer-director Mia Hansen-Løve’s fifth film, and although it unfolds at a measured pace, it’s about a sudden event: the dissolution of one woman’s life as she thought it was. Huppert plays a 50-something married philosophy professor with a clear view of her future. Because her life revolves around thinking deeply, it’s more engaging than you’d think to see how she wrestles with the emotional fallout versus the practicalities once her own life-changing events come to be. Things to Come (its French title, L’Avenir, translates more directly as The Future) opened at the Tivoli Friday.

As La La Land continues to barrel through awards season, it’s worth noting another 2016 independent film that actually has better original songs, even if it’s not a proper musical. Sing Street, written and directed by John Carney (Once), is an ’80s-set musical comedy about a working-class Irish teenager (Ferdia Walsh-Peelo) who channels his dissatisfaction into infectious pop tunes. It may not have the stylish art direction of La La Land, but it’s at least its equal as an unlikely success story, and has even more natural charm. In a perfect world, the movie’s upbeat “Drive It Like You Stole It” would be a serious contender in the Academy’s Original Song category against La La Land’s melancholy “City of Stars.” Sing Street is newly streaming on Netflix.