Bartender’s Notebook: in pursuit of the perfect patio pounder

The patio at Rye offers a fairly idyllic setting for summertime imbibing. It is situated on the edge of a very green, well-manicured lawn, overlooking a serene pond wreathed with delicate-looking willow trees. The effect is a nearly unnerving tranquility, like finding yourself inside an impressionist painting.

Van Zarr, Rye’s bar and front-of-house manager, doesn’t usually ponder this view. He’s making an exception today, he says, because he agrees that it’s an unusually ripe climate for outdoor drinking. Well, that, and because I have specifically requested his presence.

I’ve called on Zarr to help me define the undefinable: What exactly constitutes the perfect, crowd-pleasing patio cocktail? It’s not hard to get partway to the defnition; such a beverage should wed refreshment with a certain boozy quality, and one should feel comfortable ordering, say, a half-dozen in a row without the threat of gut rot come morning. But the patio pounder’s quintessence is, unlike that of your standard classic cocktails, elusive. There is no one spirit proven to go down smoother than another as you stare out onto a glassy, ripple-free pond Monet would be proud to paint. The magic in such a concoction, Zarr tells me, comes down to ratio rather than recipe.

“When I first started making drinks,” he says, “one of the guys that taught me how to make a mojito told me to make it equally sweet, equally tart and equally minty. It was about balance. And with patio pounders, you also have to consider seasonality.” Summer, Zarr reminds me, is high season for produce: radishes, strawberries, watermelon, blueberries, raspberries. He gestures to the large planter boxes on Rye’s patio wall, sprouting with various shapes of greens: the restaurant’s own herb garden for the kitchen and the bar.

Plenty of those herbs make their way onto Rye’s seasonal cocktail list — which has been optimized, Zarr tells me, for just this kind of outdoor affair.

Zarr points to the Avant Garden, a rotating gin and tonic that gives a new spin on the old presentation. This drink — designed by Rye bartender Chris Caro — also features lemon- and thyme-infused Dolin Blanc Vermouth and honeysuckle bitters. It’s served over ice in a tall Collins glass with fresh lemon slices and a sprig of thyme. The flavors are subtle, but they’re more than enough to distinguish the Avant Garden from your everyday G&T: The vermouth boosts the body of the drink and adds a little sweetness, while the honeysuckle bitters mingle with the quinine to give the tonic some character. Hendrick’s gin, the spirit backbone of this cocktail, sees its herbal profile further elevated by the infusion. Beyond the juniper, I taste elderflower and orange peel.

But the average gal can’t make it out to Leawood all the time, so I ask Zarr how I might up my G&T home game. He assures me that the vermouth infusion isn’t too tough: Pick your favorite fruit or herb and let it marinate overnight in a jar with your chosen spirit. Within 24 hours, you should be able to taste a change — and if not, another night should do the trick.

If there is more than one person in need of libation, however, Zarr suggests his rosé sangria. It arrives in a pretty crystal pitcher, a combination of Union Horse White Whiskey, a Garnacha-based rosé wine, Lillet Rose (a French aperitif wine), and Dolin Blanc vermouth. It’s a boozier sangria than I’m accustomed to, but it tastes remarkably light and fruity. If Zarr hadn’t just ticked off all the ingredients, I might have been convinced it was the best iced tea I’d ever had. He calls his sangria “chuggable.” I call it dangerous.

For those playing along at home, there are countless summer sangria recipes cluttering the Internet, but Zarr emphasizes that key theme — balance — when finding the right one for you. Rosé wine dominates his recipe, and the whiskey adds just a bit of spice to temper the sweetness of the Lillet and the vermouth. 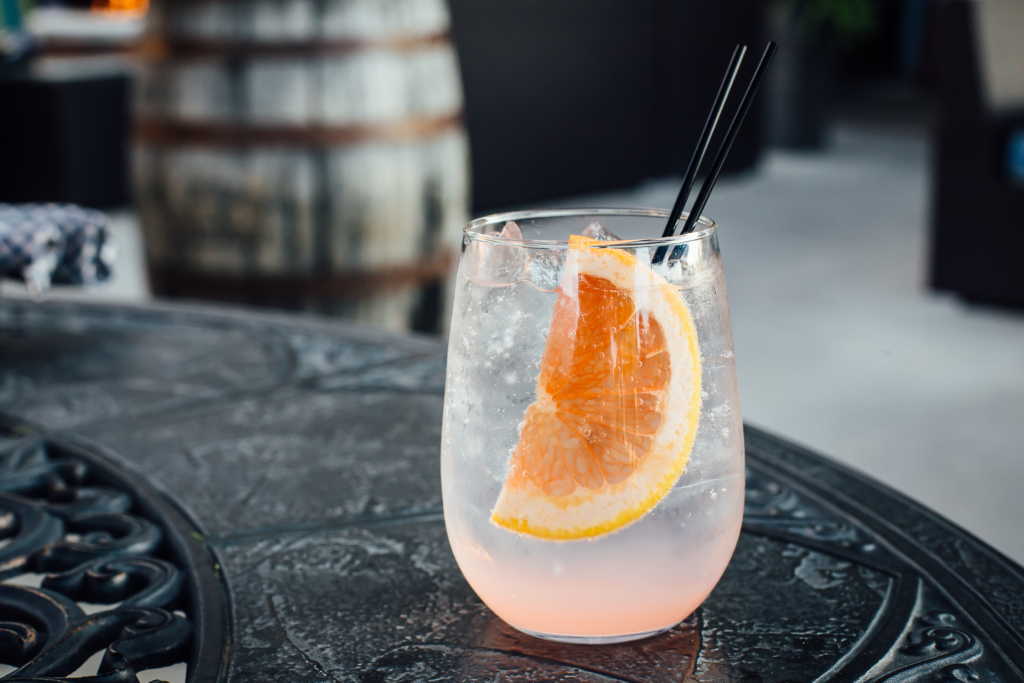 The final patio pounder that Zarr places in front of me is called the Truly, Madly, Deeply. The ’90s kid inside me rejoices at the name, which Zarr explains comes from one of the cocktail’s two ingredients: Truly Spiked & Sparkling Grapefruit and Pomelo — a low-proof spritzer that sips like a La Croix and smells like a grapefruit grove. The Deep Eddy Grapefruit Vodka is the other half of this simple sipper, and as the sugar from the sangria is catching up with me, I find it’s exactly what I want. It’s so uncomplicated and — to echo Zarr — chuggable, that I imagine myself devoting an entire afternoon to crushing a few.

“It’s so dumb,” Zarr says, and there’s a ring of admiration in his tone. “It’s just so easy to drink. When the Truly came out, one of our distributors was like, ‘OK, I know this sounds ridiculous, but just hear me out.’ I wanted to hate it, but it’s actually really tasty.”

In the end, Zarr tells me, there is no single perfect patio cocktail. It depends on the individual palate and the goal. Above all, the fine art of patio drinking must not be rushed. Calendars should be cleared. I glance down at my half-gone Truly, Madly, Deeply. The only thing I want to schedule, I tell Zarr, is another cocktail.