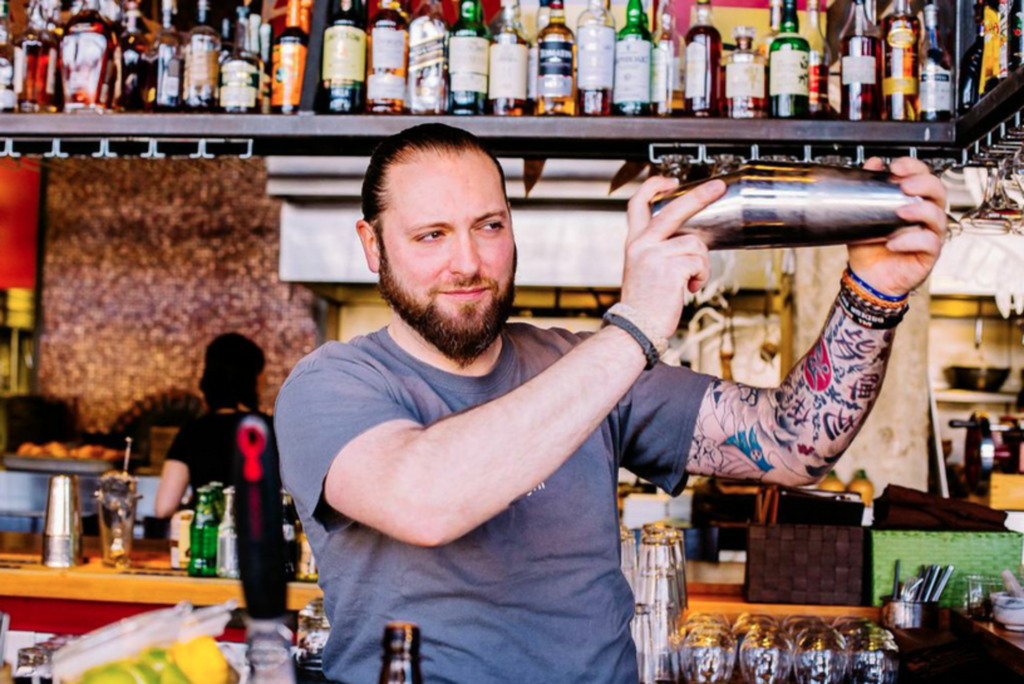 There’s a lot of debate about the origins of vodka,” Berto Santoro tells me. He leans against the bar at Extra Virgin and goes on: “Where, when, who first did it — it changes depending on who you’re with. If you talk to a Russian guy and say the Polish invented vodka, you might have a fight on your hands, and vice versa.”

Ahead of The Pitch’s first Vodka Vodka event (February 19 at the Monarch Event Space), I’ve asked Santoro to introduce me to this bar staple that is so easily taken for granted. It’s cosmos and lemon drops, yes, but I’m ready to know more. And I’ve come to the right teacher. Santoro, the bar manager at Extra Virgin, is also the president of the Kansas City chapter of the U.S. Bartenders Guild.

Vodka’s been with us since the 12th century or so. It’s a legacy spirit, and it deserves a more dignified notion than, say, Red Bull. I tell Santoro that I want to try something with a little integrity. He doesn’t hesitate: The first cocktail he sets in front of me is a classic Vesper. 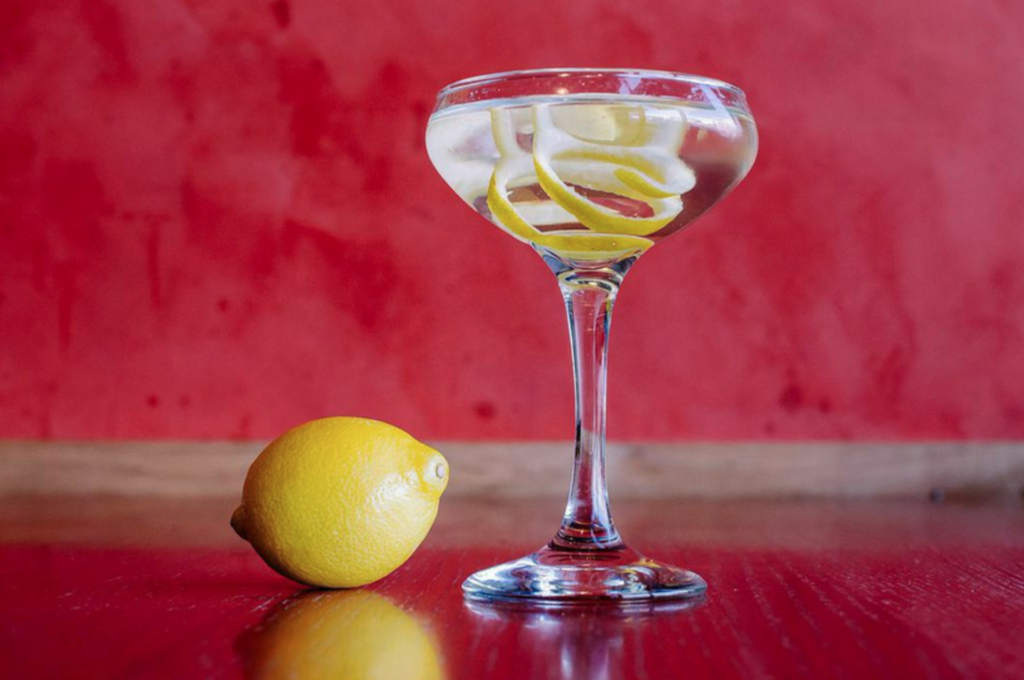 “It was a cocktail invented for the 1953 novel Casino Royale,” Santoro says, citing the first Ian Fleming 007 adventure. “It wasn’t a real thing. It was invented for James Bond. It’s mostly gin — I used Fords gin — and vodka. The recipe calls for this old, aromatized wine called Kina Lillet that they don’t really make anymore. They do make Lillet Blanc, but I find that Cocchi Americano tastes more like the original Kina Lillet.”

The Vesper is served up, in a large coupe glass, garnished with a super-long lemon twist. It looks as gentle as spring water, but it drinks like a grown-ass martini. I taste some of the floral and citrus notes of the Cocchi Americano and the juniper hints of the Fords gin, but I can’t pick out the flavor of the Stiletto vodka that Santoro has used. Which is the point, he reminds me.

“Vodka will taste like anything you put in it,” he says. “When it comes to creating cocktails for any other spirit, I think of the modifiers and the other ingredients complementing that base spirit: how to bring out the herbs and the juniper in gin, or whatever I’m working with. But when it comes to the application of a vodka cocktail, I think of it in terms of, ‘What do I want this cocktail to taste like?’ I think of vodka cocktails as a blank canvas, and I’m ready to paint a picture with whatever else I put in there — not necessarily the vodka.”

As Santoro works out another drink — this time with Żubrówka, or Bison Grass Vodka — he explains the difficulty of tasting vodkas. It’s much harder than you’d think, he says, to distinguish between a well vodka and a top-shelf vodka.

“About five years ago, I told someone I could tell the difference between Grey Goose and Stoli,” Santoro says. “And they were like, ‘OK,’ and they gave me two tastes. I had a 50-50 shot, and I still got it wrong. It’s hard. Vodka is so neutral. It’s designed that way. I mean, if you’re tasting and tasting and tasting, you’ll eventually get the nuances between them because there are subtle differences, but it’s not like tasting whiskey or scotch.”

As he says this, Santoro combines ingredients into a mixer and then gives it a good shake. He strains a frothy, pale-orange liquid into another coupe glass, then garnishes it with a brandied cherry and an orange wheel. 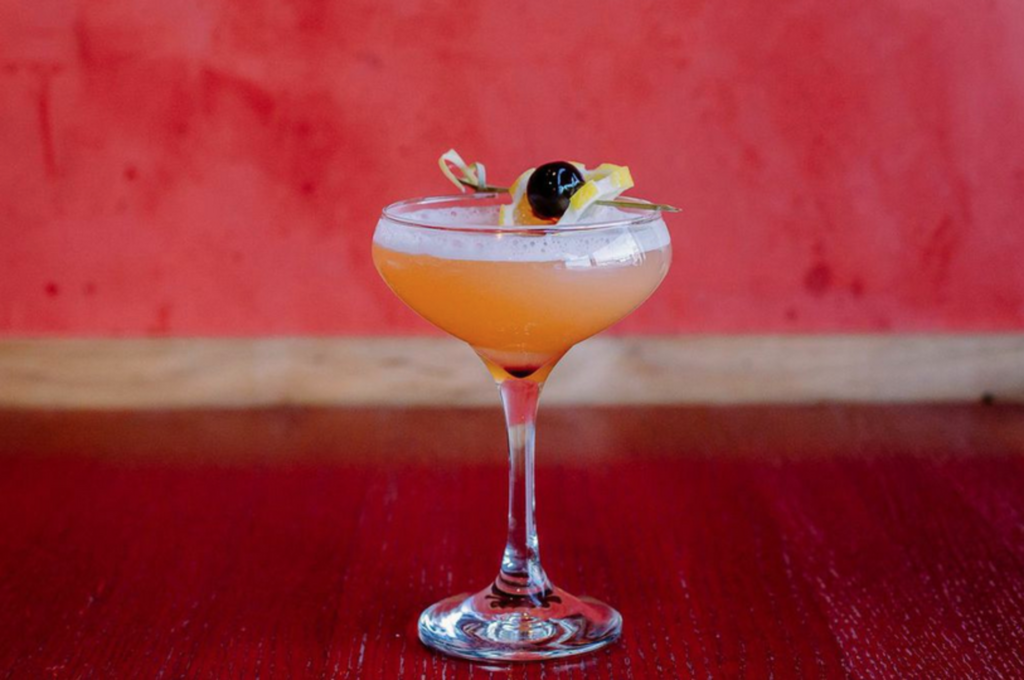 “Żubrówka is probably one of the first flavored vodkas — it goes back hundreds of years,” he says. “It’s flavored with the leaves of bison grass, and it’s so different from what you think of with flavored vodka. So in this, we have that, some lemon juice, St-Germain, Angostura bitters and some of our in-house tropical citrus tea syrup.”

On its own, the Żubrówka has a slightly nutty flavor, even some toasted coconut notes. In Santoro’s creation — Everything Is Awesome, he calls it — that flavor holds its own against the elderflower and herbal flavors of the St-Germain and the hibiscus in the syrup. It’s delicious enough to gulp down.

“You can make vodka from just about anything, it being a neutral grain spirit,” Santoro says. “Wheat, corn, potatoes, rye. Rye was the first vodka that was used, actually, then potatoes, which had a better flavor. Then, when it got to the masses and everybody started drinking it — because it used to be a status thing, the imperial family only and whatnot — then they had to use wheat because it was way easier to mass-produce.”

The Żubrówka is a Polish rye vodka, the Stiletto a Russian wheat. Next, Santoro says, he’s going to make me something with Ketel One, a Dutch wheat. 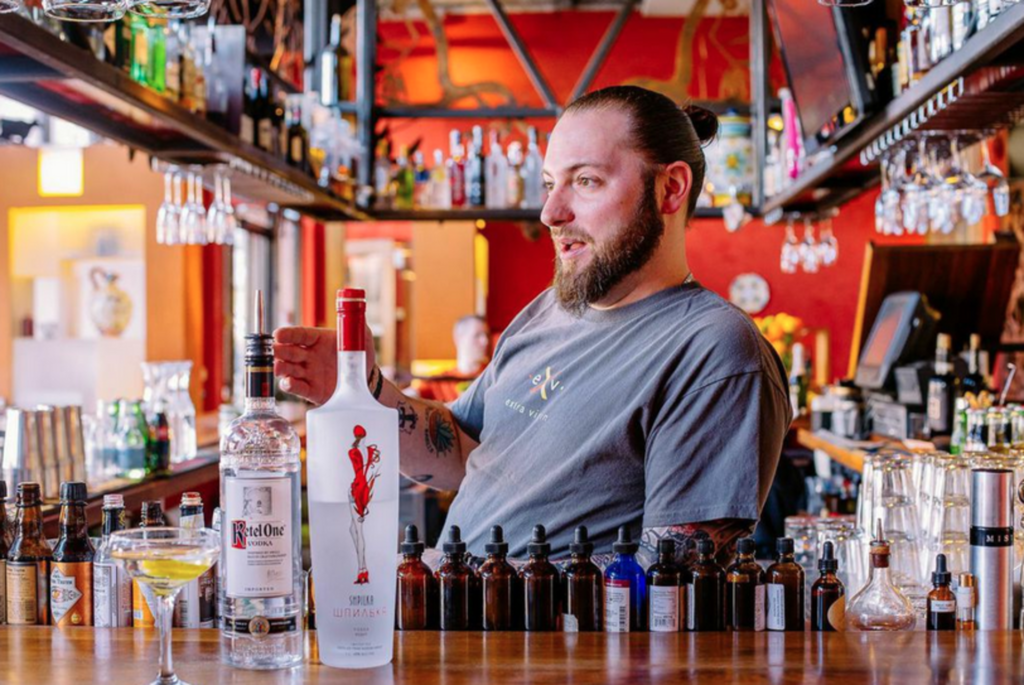 “There’s all these different types of vodkas, and they come from all over,” he tells me. “The grains come through in the vodka, I think. If you taste and you know what you’re tasting, and you say, ‘Yeah, I can taste the spiciness of the rye.’ You’ll start to notice some of those small nuances.”

While Santoro goes back to work, I observe two identical tasting pours: the first Ketel One, the second Stiletto. The Ketel One aroma brings to mind a high school football team coming in from practice and opening up a bunch of paint canisters in a tiny, locked room. The Stiletto smells slightly less intimidating.

But when I taste them, the Ketel One goes down smooth — a barely noticeable swallow. The Stiletto, on the other hand, delivers a long, burning finish of pepper and smoke. And though that’s not a sensation I’m generally in the market for, it’s not unpleasant. Santoro says such a highly perceptible finish is the mark of high-quality distilling.

Then he pushes the third cocktail my way. “This is Ketel One, lemon juice, our honey syrup, some Sorel, a little Jerry Thomas’ Own Decanter Bitters and some club soda on top to lighten it up,” Santoro says. “Sorel is a liqueur made in Brooklyn, derived from an old Haitian recipe, with some cinnamon, clove, allspice. It tastes like Thanksgiving. So I was thinking cold weather and holidays meets, you know, patio pounder.” 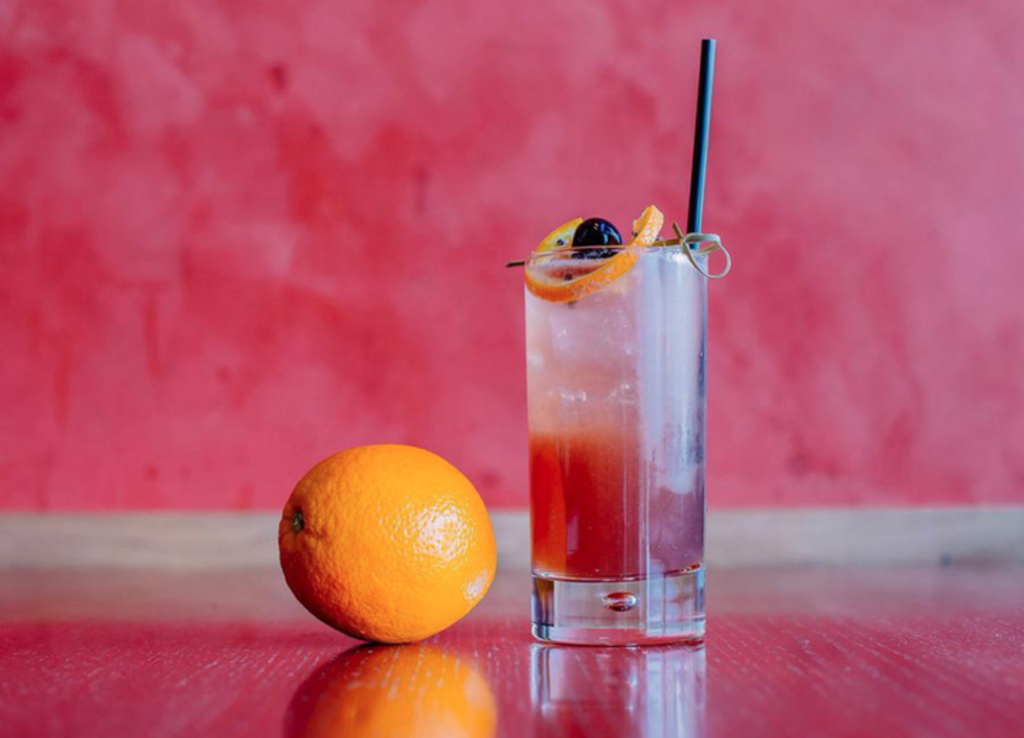 He calls this last drink Christmas in Red Hook, and he has given it to me in a Collins glass, over ice. It is, indeed, a very festive patio pounder: The ruby-red Sorel sits at the bottom of the glass with the vodka; the soda floats on top like a glittering, frozen lake. I taste baking spices and rich plum and raisin notes, and the Ketel One, just as Santoro has promised, isn’t traceable.

Vodka is the ghost spirit, I think, as I stare down at a glass drained to a few Sorel-stained ice cubes. And this has been a pretty happy haunting.