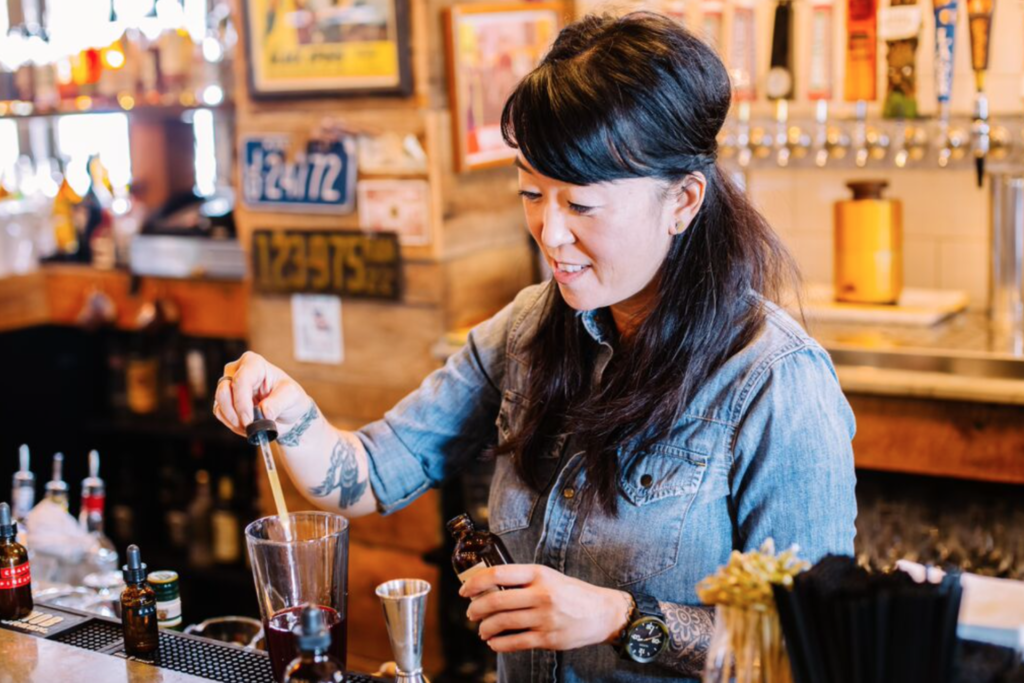 Some people call Julie Ohno “the bitters girl,” but that has nothing to do with her disposition. When I meet her at Rye, the Leawood restaurant where she works, she greets me from behind the bar with a bright smile. She’s eager to talk about what’s really behind that nickname: the seemingly endless recipe book she’s assembling for her burgeoning company, No. 22 Bitters.

“Making bitters really just started out as a hobby,” Ohno tells me. “I used to love to bake a lot, so thinking about what flavors work well together was always interesting to me. Once I started bartending, I was just like, ‘Oh, maybe I’ll just try making bitters and see how it works out.’ And I ended up loving it.”

That was about three years ago, before she started working at Colby and Megan Garrelts’ comfort-food destination. It wasn’t until a couple of months back, she says, that she stepped up the bitters pace. The local-goods shop Urban Provisions contacted her about selling her product, setting off a small frenzy.

“I’m still in the process of getting set up at the commercial kitchen and coordinating with the Health Department,” Ohno says. “There are a lot of steps for that. Honestly, I just thought I’d sell a couple bottles here and there at Urban Provisions, but now other places have been wanting to use them and wanting samples. It’s kind of grown its legs a little bit.”

When I glance at the dozen or more vials of Ohno’s bitters that she has laid across Rye’s bar, I understand the demand. Hers is an array that you aren’t likely to find at your local liquor store: ginger peach, coffee pecan, blistered lemon, charred pineapple. In fact, it’s head-spinning enough that I’m here to seek her guidance before just pointing thirstily at the most intriguing flavors.

I’m prepared for any revelations I experience to be on the subtle side. Bitters aren’t supposed to dominate any drink — a recipe usually calls for only one or two drops, and the most common, Angostura, is there to enrich the base spirit and give it depth. A few ounces of rum and a dash of Ohno’s charred pineapple do not a piña colada make. 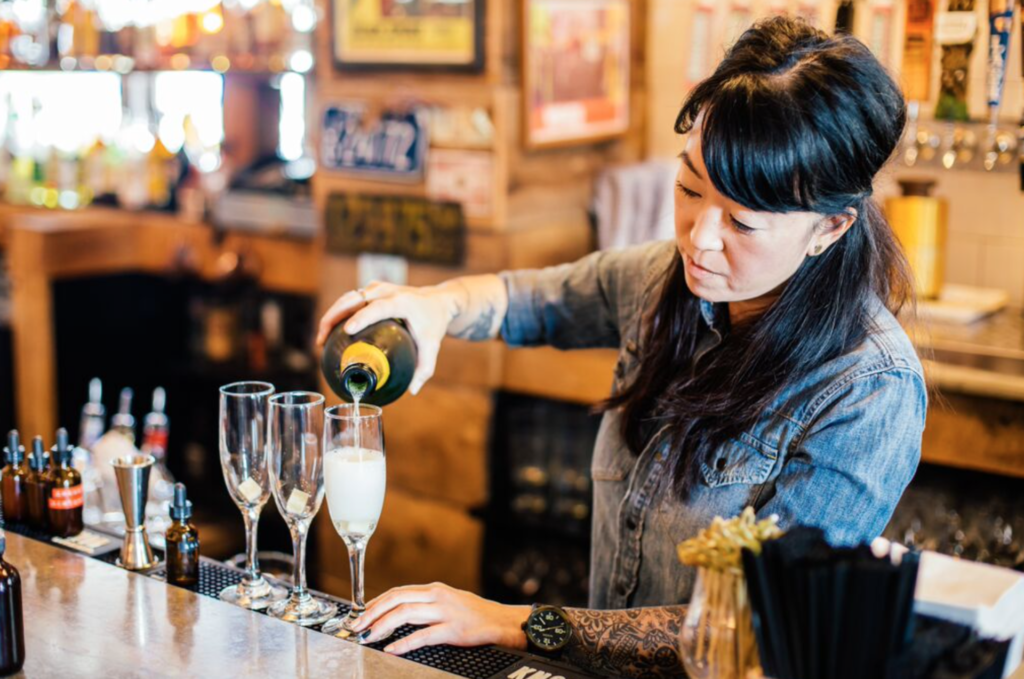 Ohno suggests that we start with a champagne cocktail. She sets up three flutes, each containing one sugar cube that has been shown a few dashes of one of Ohno’s bitters. One is charred pineapple, another celery, the third apricot. She pours the champagne, and the sugar — with its payload — quickly dissolves. I can taste which wine has which bitter: The charred pineapple delivers rich, tropical notes; the celery enhances the champagne’s dryness and adds some bitterness; and the apricot makes its glass bright and sweet.

When I tell Ohno that I’m ready for a more complex demonstration, she answers with questions: How do I feel about beets? Am I a gin drinker? Do I like my cocktails sweet or tart? I tell her that I like it all, and she conveys a look that I’ve been unhelpful before she starts to combine some ingredients in a mixer. She gives the resulting ruby-colored liquid a good shake and strains it into a Collins glass, adding ice and topping it with a splash of sparkling water and a squeeze of lemon. 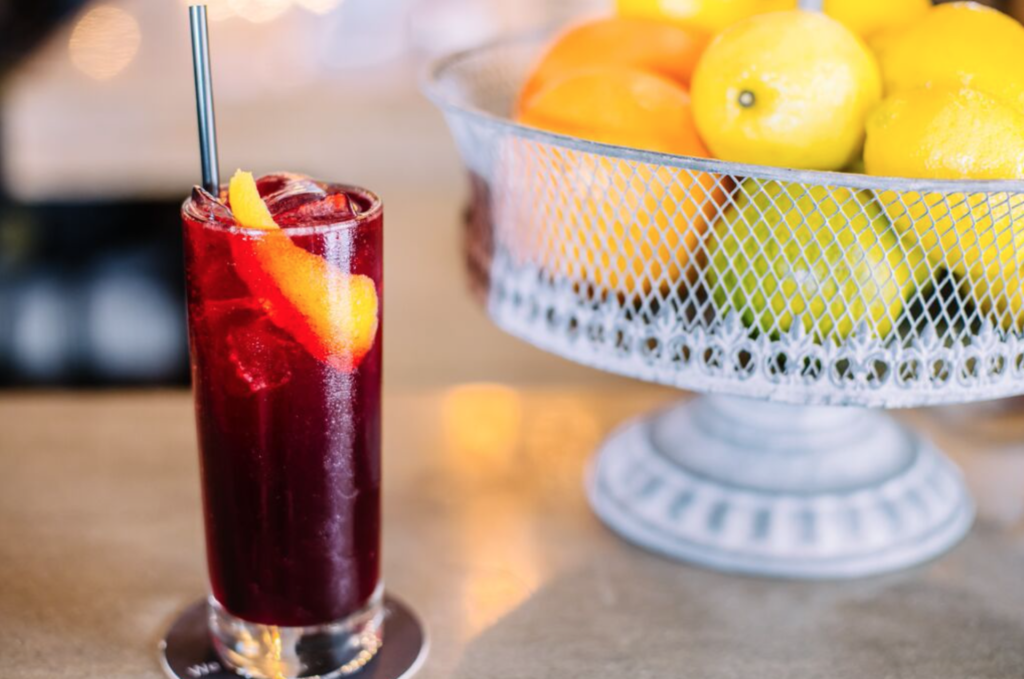 “I love beets in any drinking format,” Ohno says. “This is Ford’s Gin that’s infused with beets and a dandelion-tea syrup that we make here which accentuates the earthy quality of the beets. I also used Carpano Bianco vermouth, fresh lemon, the blistered-lemon bitters and simple syrup. We’re working on our new summer menu, and I wanted something light that’s not a vodka drink, that people could enjoy on our patio even when it’s a hundred degrees.”

Ohno’s Root Down, as she calls it (a Beastie Boys reference, she confirms), packs a heavy beet flavor. To me, the first few sips feel appallingly healthy. (Where’s the gin?) But there’s plenty of citrus on the back end, giving the cocktail a slight pucker that masks its quiet power. (There’s the gin.) It’s a refined patio pounder, for sure, but we agree that the next drink should be more of a patio sipper.

Ohno grabs an ice press — it looks like a cylindrical mini robot — and melts a large block of ice into a perfect sphere. While I’m distracted by her science, she combines the ingredients for her second drink in a mixer, drops the ice into an Old Fashioned glass, and strains this new golden-hued drink over the frozen globe. 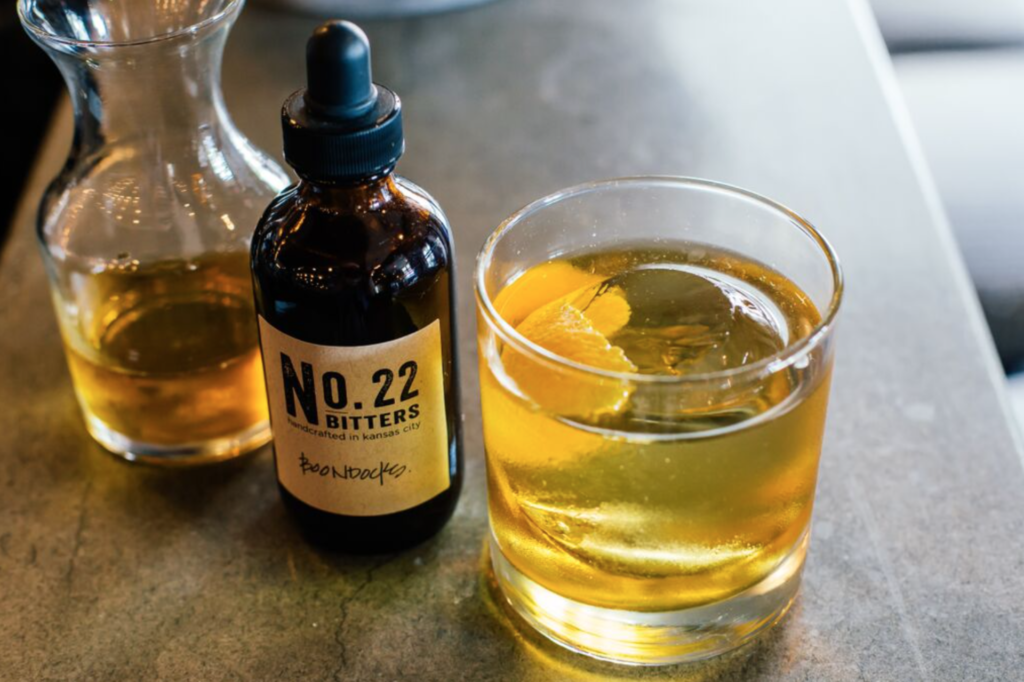 “I wanted to give an Old Fashioned a summer twist,” Ohno says as she slides the cocktail toward me. “This is Four Roses bourbon with some Gran Classico — that’s an Italian liqueur, similar to Campari. I’m using my boondocks bitters, which is toasted walnut and pecan, and two drops of a saline solution just to give it balance. For people who aren’t super into whiskey or bourbon, I think this is an easy drink — a nice teaser for a more straightforward cocktail.”

Ohno calls this the Oh! Darling, and it delivers a light sweet profile, rich caramel notes and some warmth from the bitters. Unlike the Root Down, it’s a dapper pour that demands a slow reckoning.

Ohno has a talent for layering flavor— something she must have built over years of practice, I tell her. But no, she answers. Before she came to Rye, the only bartending experience she’d had was pulling taps at the Gaf, the late Irish pub in Waldo.

“I really haven’t been doing this for that long compared to some people,” she says, “but I feel lucky.”

Ohno’s good fortune is likely to grow once No. 22 Bitters becomes official, six weeks or so from now. Her rollout will start at Urban Provisions and a handful of other local shops before she takes her product, she hopes, into local restaurants.

“I’d love to create custom flavors for local bars,” Ohno says. “It’s an unlikely passion, I suppose, but I’m having fun with it.”

Shake and top with sparkling water.

Stir and strain over ice, with an orange-peel garnish.