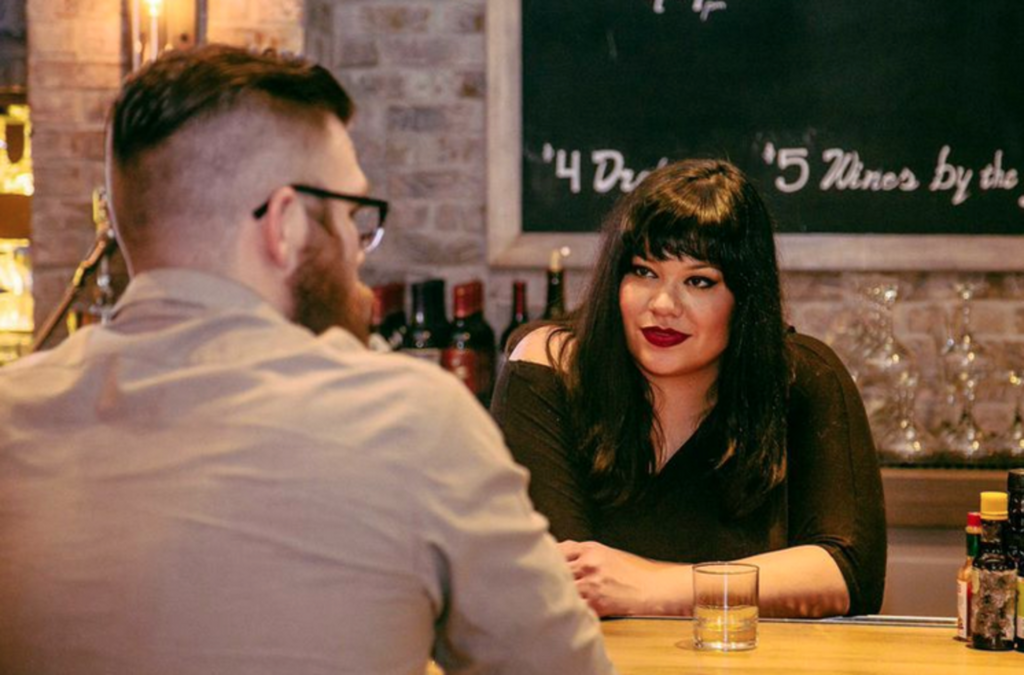 “Bourbon is as American as apple pie,” bartender Rachel Freeman tells me. She leans against the bar at the Power & Light District’s newest restaurant, Cleaver & Cork, having set out more than a half-dozen tasting glasses filled with that golden-brown nectar.

Bar manager Andrew Olsen nods his agreement with Freeman, and indeed there’s no arguing the point. Bourbon was born in America’s Deep South in the early 19th century (maybe even earlier, according to some legends).

“You just have to remember that whiskey is an umbrella,” Olsen says. “Under that umbrella, you have Canadian, Irish, Kentucky, Scotch and Kansas City whiskey — which is recognized by the FDA as being its own category.” Olsen is referring to J. Rieger & Co.’s whiskey, which launched last November. “So what makes a bourbon a bourbon is that it is made from 51 percent corn or more. It has to go into the barrel at a certain proof — 125 — and it can only be made in new American charred-oak casks. And all bourbon has to be made in the U.S.”

In advance of The Pitch’s second-annual Bacon & Bourbon event April 16, Olsen and Freeman have agreed to give me a crash course in bourbon appreciation. Four bottles sit among us: Old Rip Van Winkle 10 Year, Four Roses Small Batch, Blanton’s and Rittenhouse (all Kentucky bourbons except the latter). These are, as Olsen puts it, some premier shit. 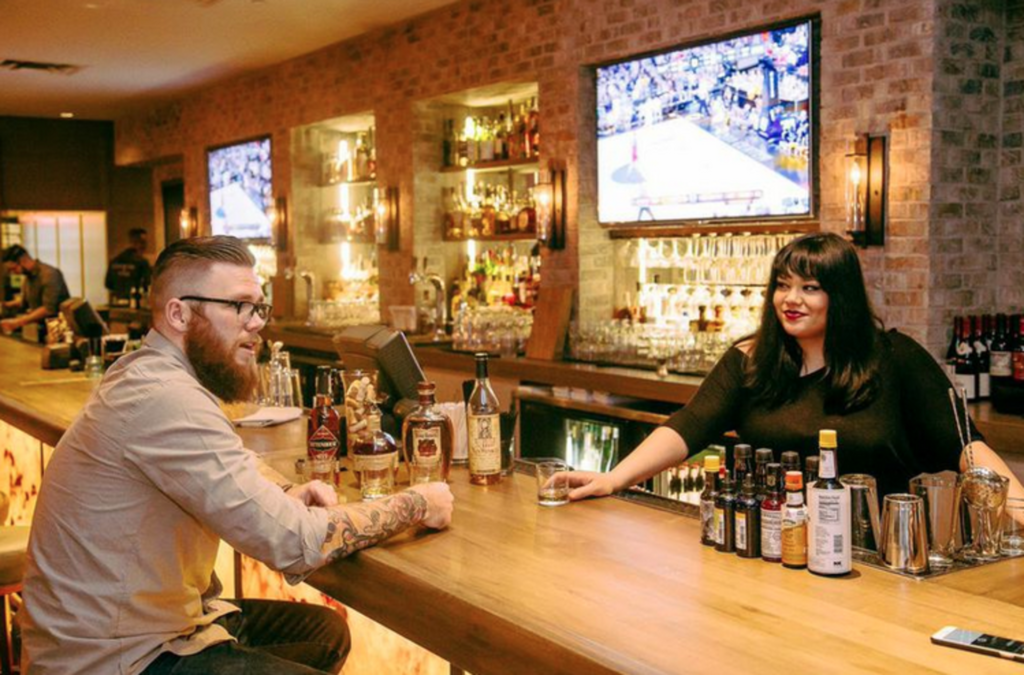 We taste the Old Rip first. “To me, the best representation of American straight bourbon comes from this distiller,” Olsen says. There are several other award-winning varietals in the Van Winkle line, all aged longer (and with a higher price tag) than the Old Rip, but there’s no room to complain as we enjoy our sips.

“When you’re tasting bourbon, you’re looking for something rich, with a full mouthfeel and texture, and that’s what I get here,” Olsen says. “A lot of the time with bourbon, the older you age it, the more it tastes like the wood it sat in. But I get a lot of different flavors here.”

I pick up notes of caramel, brown sugar and white pepper. The Old Rip is a far cry from the well shots that once put me off whiskey.

Olsen pushes the next taste toward me: Four Roses Small Batch. “Four Roses is a blend of several different whiskeys, and the product isn’t aged as long as the others, so you get more of the natural flavor,” he says. “Usually, American oak will add some vanilla characteristics to a bourbon, but in younger bourbons, you’ll get elements of the mash itself. Four Roses might taste a little sweeter because it hasn’t aged very long.”

Next he pushes the Blanton’s toward me, another Kentucky bourbon, this one aged for nine years.

“I want to have things that are a little older,” he explains. “That’s just my personal preference because I think you get so much more complexity out of it.”

This one gives off a hearty, warm perfume. On the tongue, it’s plenty spicy but not harsh, and there’s a long, honeyed finish.

“That’ll clear your sinuses,” Freeman says with a laugh.

Last comes Rittenhouse, and it’s not like the others. In addition to being the only rye whiskey in the lineup, it’s from a bottle that’s utterly unsexy: plastic screw-top cap, plain black-and-red label.

“Bartenders across the world love Rittenhouse because it’s got good body and good flavor,” Olsen says. “The rye gives it that extra little spice, which is great for drinks — it makes a badass Manhattan or old fashioned. By the bottling, you feel like you’re slumming it, but just because it’s inexpensive doesn’t mean it’s low-quality. It’s spicy and it’s got some heat on it — heavy texture, good vanilla notes. You can’t get much better than that unless you want to pay, like, $100 a bottle.” 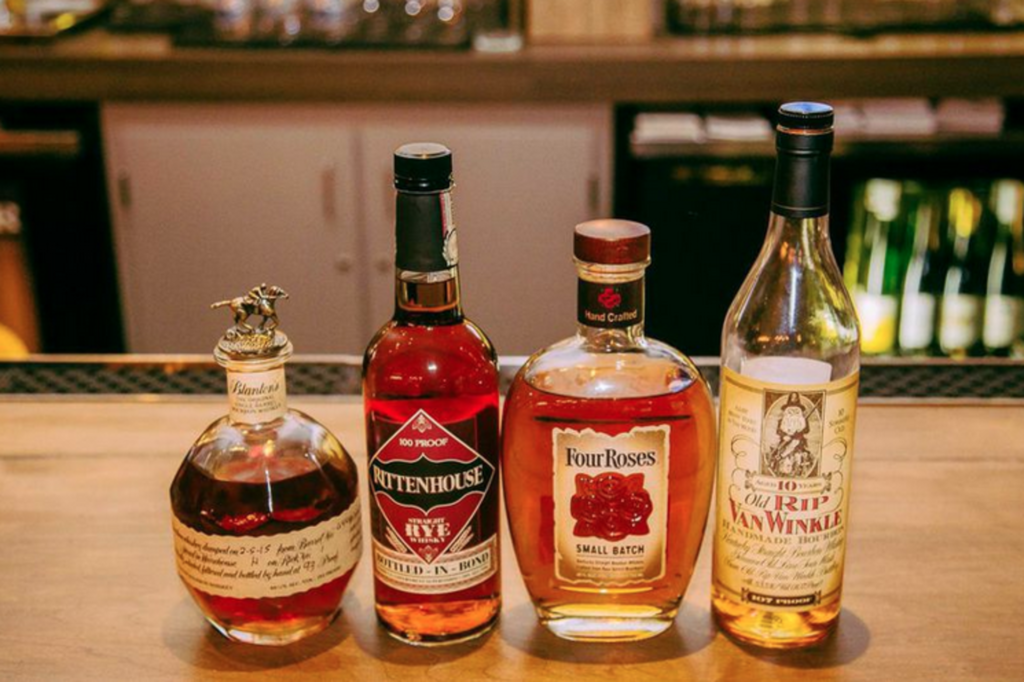 As Olsen and I drain our glasses, Freeman takes over the conversation. Now that I feel prepared to enjoy bourbon, I’m ready to try her bourbon cocktails. She’s one of six featured bartenders who have enlisted in Bacon & Bourbon’s Cocktail Corner, where she will produce a signature cocktail en masse, and she has agreed to show off some of her skills ahead of the game.

The first drink she prepares is called Strange Fruit, a recipe that she perfected during her stint at Cocobolos. It calls for bourbon, mezcal and fresh pear.

“What inspired this was, I was doing a lot of grilling last year, and I got into grilling fruits and everything,” Freeman says. “So I was like, I want a cocktail that tastes like a grilled peach.”

Freeman goes to work, muddling a pear — this one, she says with a groan, not quite having reached her preferred ripeness — and combining Angostura bitters, Buffalo Trace bourbon, Del Maguey Vida mezcal and a small amount of Bénédictine (a sweet French herbal liqueur). She shakes the mixture vigorously, then dumps it over ice in a large rocks glass. Chunks of pear give the liquid an enticing, golden glitter.

“Some of my favorite things to do are cocktails that are boozy as fuck but don’t taste like it,” Freeman says. “So this one is pretty much all alcohol.” 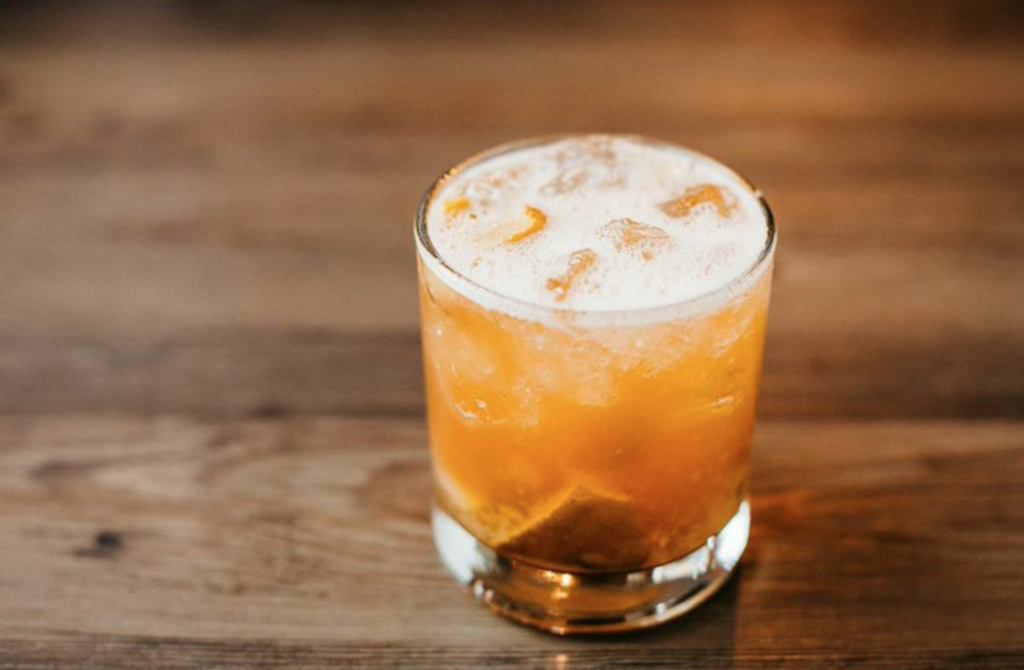 Oh, yes, it is — and I could scarcely be more pleased. It has the aroma of a freshly baked pear tart but it drinks like a grown-up cocktail. As Freeman goes to work on her second creation, I will myself not to scavenge pear slivers from among the ice cubes.

So far, so safe, until Freeman takes two long orange peels, drops them into a glass and lights them on fire. This is not just flaming: Freeman keeps her makeshift bonfire going for several moments, coating the peels with bitters and constantly stirring them as the oils burn off. It’s quite a show, and the bar fills with the scent of orange zest. 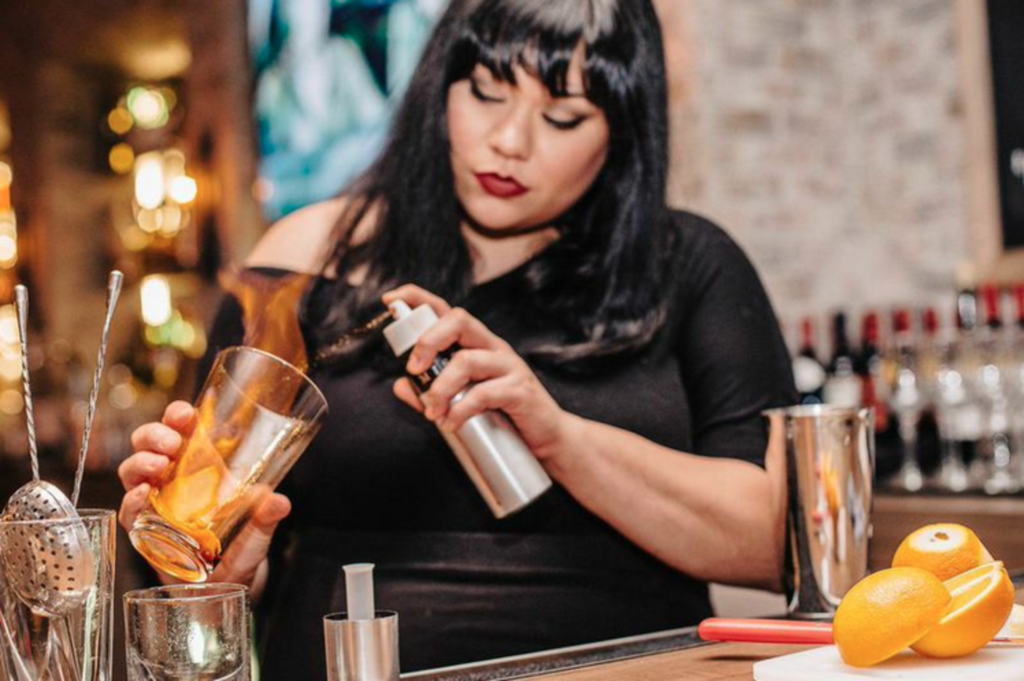 Finally, Freeman takes the peels and the orange bitters that she has just created and adds them to her mixer and shakes. She double strains this sunset-colored liquid into a coupe glass and drops a few dots of Angostura bitters onto the froth.

“I wanted to be a painter before I was a bartender,” Freeman says, smiling as she creates a sun motif on the top of the drink. 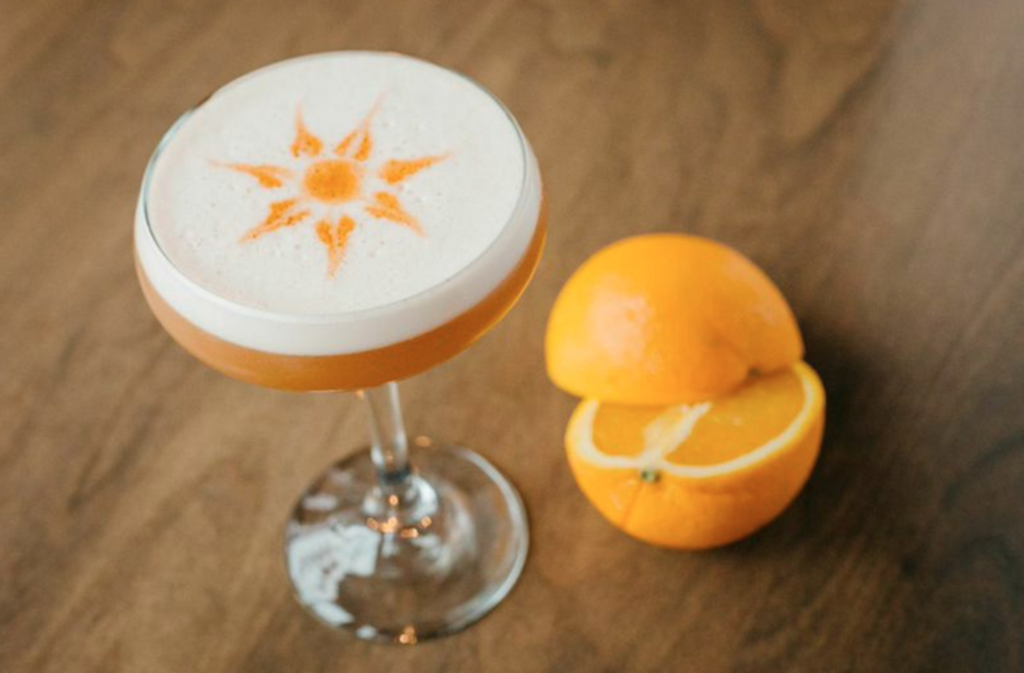 I take a few generous sips and find smoke and flavors like an orange Creamsicle commingling perfectly. Who’s to say Freeman isn’t an artist?

Freeman: Muddle fruit, combine all ingredients and shake. Pour over ice in a double rocks glass.