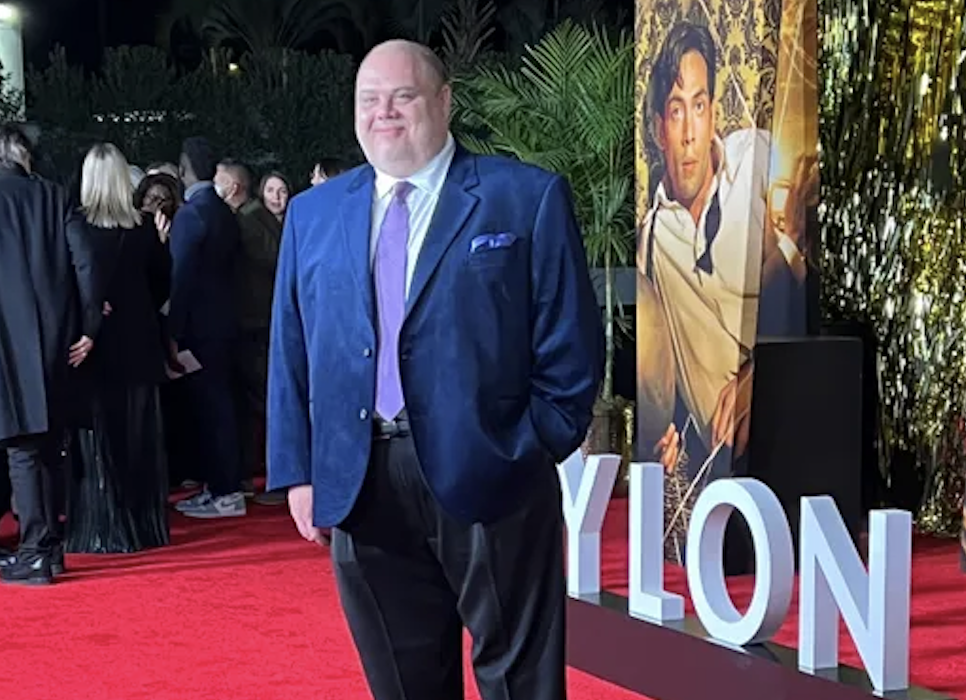 Missouri-native actor Troy Metcalf is making a name for himself in the show biz world, appearing on the big screen alongside stars like Margot Robbie and Brad Pitt in Damien Chazelle’s period comedy-drama Babylon. Remembering the days when he admired Hollywood stars from the audience, Metcalf seems to be inching closer to his dreams after the release of the 2022 film.

Whiplash and LaLa Land director Chazelle dives into the vulgarity that was Hollywood in the 20s and 30s, leaving no dirty details out. Taking place during the last moments of the silent film era, the film focuses on the dramatic highs and lows of the lives of its characters. Metcalf, who attended David H. Hickman High School in Columbia before graduating from Missouri State in 1996, acted alongside fellow Missouri native Pitt in the debaucherous drama.

We got a chance to sit down and chat with the actor and get the inside scoop on all things Babylon.

The Pitch: How did your career begin as an actor?

Troy Metcalf: My parents used to take me to see plays at a professional theatre where they would do like six to eight plays over the summer. I remember I would see an actor doing the lead of like, Romeo and Juliet, and then would see the same actor in something else, and it was just amazing to me because they got to live all of these different lives and I wanted to do that. So that’s when I got the acting bug. I love acting, I love being on stage and I love being active that way.

How does your experience doing Babylon differ from your other roles?

This one is kind of a hard left for me, which is excellent. I got to play a character that’s inspired by Roscoe Arbuckle, who was a huge film star in the 1920s during the silent movie era. He lived his life in major excess whether it be drugs, alcohol, women, or partying. I got to do this deep dive on him, craft his role, and have a lot of fun with it.

Did you have a process when preparing for your role?

It’s amazing because as an actor you do all of the prep work before you get to set. There’s a lot of research as well as substitutions and figuring out what you want in scenes and then when you get to set you really have to let all of that go, because that’s when the real collaboration starts. You have to trust that you’ve done the amount of work you need to do in order to show up and then listen and respond and communicate with others.

Obviously, with Damien being the director, he has a vision and it’s that vision that you’re there to help fulfill. It’s Damien Chazelle’s vision. What’s amazing is that Damien allows actors to come onto set and bring their ideas and then he shapes those to funnel into his vision as opposed to coming and dictating to you how it should be done. He recognizes everyone’s artistry, whether that’s if they’re a PA or actor, or costume designer. He really lets artists come to life.

What was it like working with director Damien Chazelle?

Well, it’s all a bit intimidating. I had actually initially auditioned for another role. We sent that into casting, and then they said Damien wanted me to read for Orville Pickwick. So we did the self-tape, we sent it in, and literally within 24 hours casting called. Of course, I was ecstatic and over the moon.

The very first day I was on set, July 12 of 2021, I went to the trailer and got all my stuff on and was told they were taking me down to set and I had not yet met Damien in person. I got to set and they walked me to where Damien was. He turned around, and I was going to say my traditional introduction. Before I was able to say anything, Damien gave me a huge hug and said “Troy! It’s great to see you in person, as opposed to the little picture I have of you on my wall right now.” He made himself so real and so approachable and I knew I was going to have a blast.

What was it like being in a scene that’s so crucial to the plot of the story?

The scene sequence that I’m a part of, with me and Phoebe Tonkin, is a sequence that’s really the inciting incident for Margot’s character. I’m not going to spoil anything for anyone, but, if we didn’t do what we do in that particular sequence, Margot wouldn’t be able to do what she does, so it sets a lot in motion.

Originally the film was four hours long and it was decided that was a bit too much, so I was cut from various scenes as well as everyone else. But knowing that sequence had to be in there was daunting and at the same time, I feel like it honors what the silent film era was like in a very honest way. It wasn’t this pure, pristine idea that a lot of people have of it. Absolutely everything was unchecked. It was unchecked excessiveness back then that I feel this film and scene honor.

What was your favorite part about being in Babylon?

Knowing that each day I went into work everyone was at the top of their game. When you’re working with people like Brad Pitt, Margot Robbie, Diego Calva, Damien, and Olivia Hamilton—all at the absolute top of their artistic game. It really challenged me as an actor and an artist to go in there and bring everything I had and then search for a little more. I grew on this film, and I will always cherish that.