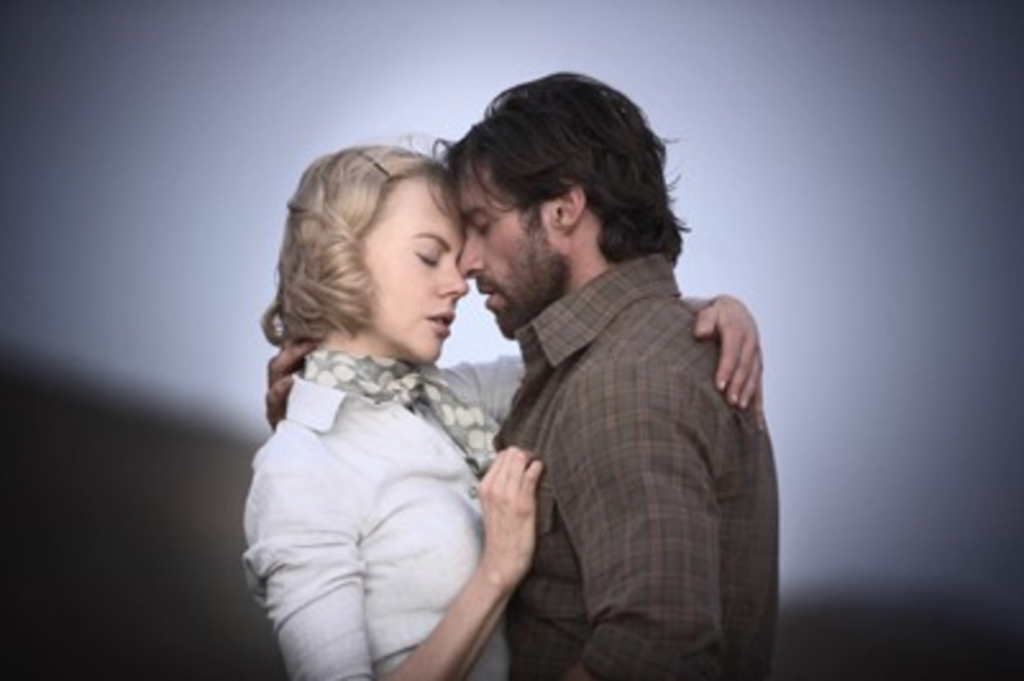 You don’t have to have been raised on colonial Brit lit, classic melodramas, Westerns or war movies to figure out, within 15 minutes, the likely outcome of Baz Luhrmann’s Australia, but any or all of the above will help.

Tightly wound and corseted posh English stiff finds herself unwillingly parked in a dusty corner of scenic Commonwealth country, on the brink of global military conflict. Posh stiff takes throbbingly pre-erotic dislike to hirsute but reassuringly Anglo diamond in the rough, who glowers back briefly, then shows her how to love the land, be nice to brown-skinned natives, let her hair down every which way, and never lie back and think of England again.

Australia tells a boilerplate tale already deeply embedded in the narratives of many imperial aggressors and their former colonies. Only this time, in honor of the Australian government’s formal apology to the Aborigines earlier this year, for stealing and forcibly churching their children, the story is told from the viewpoint of an indigenous boy caught between conquerors and conquered.

This is all to the good, given that the love affair on which the action nominally hinges rarely rises from the dusty soil in which it’s meant to take root. In part, that’s because it stars two Aussies who do “pretty” better than “sexy.”

As Lady Sarah Ashley, Nicole Kidman is a prim beanpole of a socialite who shows up on the Outback cattle ranch of Faraway Downs armed with nothing but her love of horses, a suspicion that her louse of a husband is carrying on with hussies, and lots of fancy luggage. She channels neither Deborah Kerr nor Katharine Hepburn but a weirdly pedantic amalgam of Leslie Howard and Mary Poppins.

Lady Sarah’s inconvenient spouse is promptly dispatched, leaving a trail of false murder charges, land envy and miscegenation behind him. Before long, she has jettisoned her high-necked blouses and cardigans in favor of the far more alluring whip and jodhpurs, while batting emboldened eyelashes at a barrel-chested drover named Drover, played with a harmless blend of twinkle and tragic by Hugh Jackman. Kidman and Jackman accomplish their transformation from alienated lost souls to committed lovers and de facto parents like the comfortable old pals they are in life.

For truer romance and sexual steam, I refer you to Luhrmann’s first and best film, Strictly Ballroom. Still, there’s plenty more going on in this 165-minute epic, into which the director has stuffed every genre he never got around to plundering for Romeo + Juliet and Moulin Rouge, and some that he did. Luhrmann’s hunting and pecking from the Hollywood spectaculars that fed his imagination through a childhood in rural Australia is invigorating and fun. But the result is mostly a wooden, derivative melding of ’40s maternal melodramas, oaters and World War II actioners as Sarah, Drover and their cobbled-together multicultural family herd cattle across the Outback to the town of Darwin, as it braces itself for a devastating attack by Japanese warplanes.

With its stagey set pieces and declamatory dialogue written by Luhrmann, with Stuart Beattie (Pirates of the Caribbean), Ronald Harwood (go-to guy for upper-class twitspeak), and Australian novelist Richard Flanagan, Australia also feels like a musical from which all singing and dancing have been trimmed except for some strenuous theft from The Wizard of Oz. The references are notably lacking in Luhrmann’s usual arch mischief, and if you blink, you’ll miss the flash of tongue-in-cheek in his travelogue vision of the real Oz — however beautifully lit in Old Master light and shadow by cinematographer Mandy Walker — as the land of kangaroos, billabongs and boozy pubgoers roaring their way through “Waltzing Matilda.”

That said, you would need a heart of stone to resist the enchanting little boy, Nullah (wonderfully played by newcomer Brandon Walters), the offspring of a white man and an Aborigine mother, who drives the magical-realist subtext of Australia and its generously inclusive and forgiving vision. (Luhrmann allegedly shot three endings to the movie, and it feels as though they all made the cut.) I can picture hardcore haters of the colonial oppressor rolling their eyes at Nullah’s farewell line. But a little conciliation goes a long way these days, and I freely confess to being almost as undone by the ending of Australia as I was by the climax of that other post-colonial feel-good movie of the year, Slumdog Millionaire.

F9: The Fast Saga is the craziest Fast movie yet, and the most 'movie' movie of the year