Anna Marie Tutera was as adept as any grade-schooler at feigning illness. But her reason for wanting out of class was different — and signaled what would become a lifelong interest.

“I’m sure my teachers would not like to hear this,” she says. “Sometimes I would pretend like I was sick so my dad would have to come and pick me up.”

That’s because her dad, Henry “Hank” Tutera, worked for Columbia Building Company. And on those days, a young Anna Marie would spend hours in a construction trailer, watching her dad talk with his crew and manage the details of development, from budget minutia to the laying of foundations. She recalls the excitement of seeing drawings on paper metamorphose into the bricks and beams of an actual structure.

“You were building from the ground up,” she says. “You were transforming a space that came from your vision and your ideas.”

Tutera calls on this part of her upbringing today as executive director of the Kansas City Museum at Corinthian Hall. The old mansion, in the historic Scarritt Renaissance neighborhood of Northeast Kansas City, is completing a planning process for an ambitious restoration and renovation.

It’s been two years since Tutera took the job overseeing the former Long family estate, which bumps against Kessler Park and overlooks the scenic Missouri River Valley. In that time, she has helped to map out a series of projects that will unfold over the next decade. She has built a 21,000-strong e-mail list and formed critical bonds with neighborhood stakeholders.  And she has pumped up a slate of events at the space, which will remain open to the public during its transition. There are hardhats, yes, but there also are ongoing local art exhibits and summer concerts on the lawn (the latest of which happens Friday, August 12, when members of Making Movies play).

“We wanted to have this environment where visitors could come experience programs and events and to start to understand the types and quality of events that we are going to have here,” Tutera says. “When people come here and they see all the different layers and they start to see it, they should be excited.”

The museum, she adds, is coming into its own again as a place remembered fondly by multiple generations of Kansas Citians who recall school field trips and family outings. “We will bring back a reinterpretation of what they remember,” she says. “The youth and families will be our target audience.” 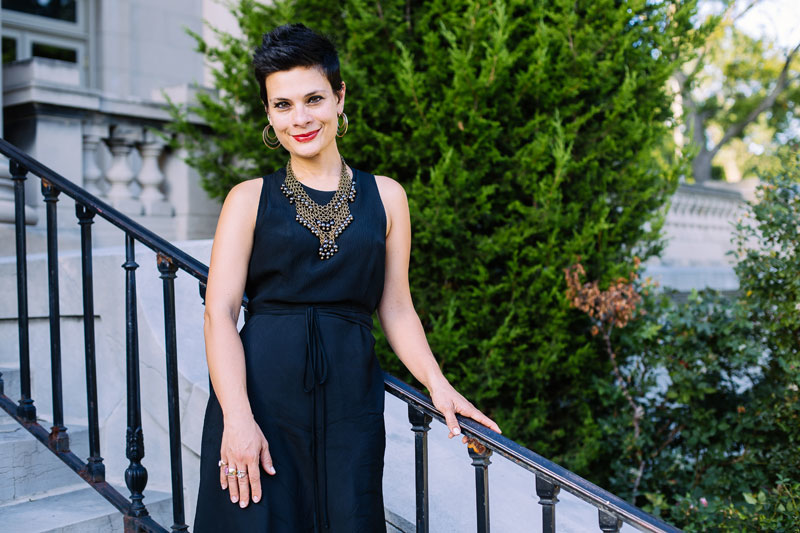 Tutera should feel right at home in the museum. She spent much of her childhood across the street from it, in the family home at 3400 Gladstone.

“My cultural heritage is the Northeast,” she says. “My dad’s parents immigrated from Italy and settled on Olive.” From that street, the family moved to the Gladstone address, with aunts, uncles, cousins and Tutera’s immediate family crossing its threshold countless times from 1946 through the 1990s. “It’s a big Italian family,” she says. “It was a little like a compound.”

The home’s big staircase was like that of the museum. “I used to have this recurring dream with a staircase,” she says, “and all these years I always associated it with my grandmother’s house and thought I am dreaming of Nani’s house. Then I walked into the museum, and I think I may have been dreaming about this staircase all along.”

Tutera also keeps an American Indian beaded necklace she got in the museum gift store as a child. “This is a personal project for me because I can make a contribution to a place that was so important to my heritage and family,” she says.

Tutera left Kansas City for college at Northwestern University. She stayed in Chicago and worked at the Chicago Children’s Museum, eventually moving to San Francisco and receiving a master’s in museum education at John F. Kennedy University. She delved into neighborhood and community development projects at the San Francisco Foundation. She then spent time in Santa Fe, New Mexico, before returning to Kansas City in 2012 with her husband, the sculptor Caleb Bowman, and their two sons.

“We just felt like we could make an impact in Kansas City and we wanted them [the kids] to be with their grandmothers and their cousins,” she says.

She took a job as the director of the Wornall/Majors House Museum in the summer of 2012. Soon, that institution began a capital project that repaired structure, plaster and parts of the interior. Tutera made connections with local engineers who knew her dad. “That set the tone for coming back to Kansas City, because I got back into the Kansas City design and construction,” she says.

Tutera took her post at the Kansas City Museum in May 2014, shortly after the Parks and Recreation Department assumed control of the space. City architect Eric Bosch, tasked with helping to restore the museum to its historic shape, began his work with the structure 20 years ago, fixing the exterior, the roof and the windows. As planning evolved, he and Tutera last year toured other museums that once were private homes: New York’s Cooper Hewitt and Neue Galerie and the Jewish Museum.

Bringing on Tutera was a turning point in the museum’s long re-ascent, Bosch says. “She doesn’t accept no for anything, and she thinks big,” he says.

The museum, says Leslie Caplan, Scarritt Renaissance Neighborhood Association president, “has always been one of our primary assets, and since the changes of parks and recs operating it and bringing on Anna Marie, it has vastly improved the ability to operate and connect with the neighborhood.”

Caplan goes on: “When Tutera took the job, she immediately went out to seek neighborhood opinions. She saw the community and the museum as all-inclusive. It had been an extremely critical concern when Union Station operated it, and a lot of controversy and concern that it would close and lots of conflict, and we were thrilled when parks and rec stepped up and said they would.”

At the July meeting of the Scarritt Renaissance Neighborhood Association, in the museum’s carriage house, Tutera joined the group. Placards with artists’ renderings by International Architects Atelier (the firm hired last year) stood at attention as a short line of people moved from one drawing to the next, seeing how the museum would look in the future. The discussion that followed centered on Stage 1 — $12 million worth of work on Corinthian Hall, funded by the museum levy and a mixture of other public and private funding. It is to be completed in the next few years. (Costs for the next stages haven’t been announced yet, though a business plan, a space plan and a “visitor experience” plan have been produced, with goals mapped through 2024.)

It was a more hopeful scene than anyone could have expected a few years ago.

Before Kansas City Parks and Recreation took charge of the museum, in early 2014, it was under the direction of Union Station, subject to a management agreement with the city of Kansas City, Missouri. The agreement covered “both caring for the museum collection and developing programming,” Union Station officials recently stated in an e-mail, in response to a question about the two institutions’ relationship. Questions surrounded Union Station’s stewardship, however, with human-resources decisions coming under fire, and allegations of misused public funding related to the museum mill-levy. Many believed that the museum had suffered at the expense of Union Station’s more public renaissance.

The perception today is that Parks and Recreation’s takeover has already improved the museum.

“That shifted everything,” Tutera says. “Parks and rec has led incredible projects, like the Liberty Memorial.”

Mark McHenry, director of Parks and Recreation, describes the parting as divorce-like, with Union Station and the Kansas City Museum going different directions. His department has a history of seeing the cultural destinations such as the National World War I Museum and the Black Archives through transition. “When we took over, the museum did not have an executive director, and that was one of the first things we did,” McHenry says. “Someone needed to step in.”

McHenry says Tutera, known for her tenure at Wornall, was who the department needed: someone to establish ties with the neighborhood and bring programming to the museum. On her watch, he adds, there’s been progress in strategic planning. Some of the levy — which pays the bills and salaries and storage fees — will be used for restoration, but more capital will be needed.

Tutera says the museum’s renovations have been under discussion since before oversight of the space changed. “It started with an interpretive plan in 2010 that established this space is going to be a museum,” she says. “What didn’t exist before that exists now was that in-depth planning process.”

For Tutera, that process started with detailed study of previous plans to create, she says, “a robust, very dynamic, very ambitious schedule of exhibits.” She goes on: “We knew that it was important to start showing the public what was possible and what potential really awaits us.

“We have a stellar collection and they haven’t seen it because it has been in storage and this is a renovated space and we are careful about what we bring in this area. That is always a disconnect when they don’t see it. We have over 100,000 artifacts.” 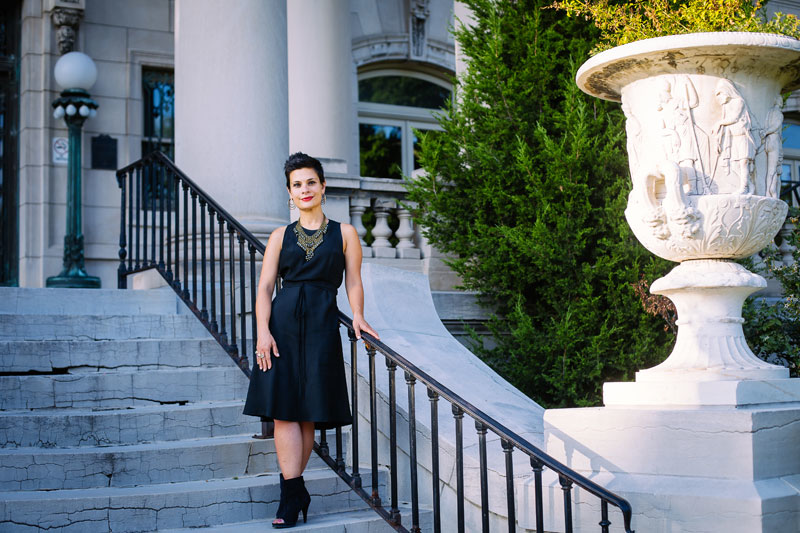 On a Friday evening last month, a local act called the Buhs stood on a balcony overlooking the Kansas City Museum’s lawn, preparing to play its mix of funk, hip-hop and groove. Tutera welcomed those who had gathered for the concert.

“Thank you so much for coming out tonight. I thank you for supporting the Kansas City Museum,” she said.

Carried along by the band’s horns, Tutera wove through the crowd, saying hello to people she knew, meeting newcomers at another of the summer shows that have drawn people from the neighborhood, and beyond it, to lounge on blankets or sit in lawn chairs. An hour into the concert, people were still arriving with dogs and children and picnic baskets. Neighbors across the street listened to the music from their porches.

These concerts, Tutera figured, would help keep the museum a focus for community as the area around it attempts its own rebirth. “There are significant revitalization projects happening in the Northeast,” she says later. “All of the Paseo Gateway Project, Independence Avenue becoming a CID [community improvement district] — all these systemic changes are happening here. We really want to become that hub where we will connect and collaborate with other institutions. That is our responsibility as the city museum. We want to be that connector, that collaborator, where we inspire visitors to delve deeper in the subject matter.”

The outreach in recent months has included an exhibit featuring local designer Heidi Herrman at the Historic Garment Museum of Kansas City, and a smaller display of medical devices at Union Station accompanying that space’s big-ticket Body Worlds & the Cycle of Life exhibition.

This weekend, the museum is hosting a collecting event for Latinos and Baseball: In the Barrios and the Big Leagues, part of a Smithsonian project.

Throughout, there are the public hard-hat tours during open hours, each one a reminder how much more work lies ahead.

“I like being a part of transformation,” Tutera says. “I stepped on this property, and I could just see it.”

Latinos and Baseball: In the Barrios and the Big Leagues
Friday and Saturday at the Kansas City Museum, 3218 Gladstone Boulevard
7 p.m. Friday, August 12: Enrique and Diego from Making Movies
See kansascitymuseum.org for details and other events