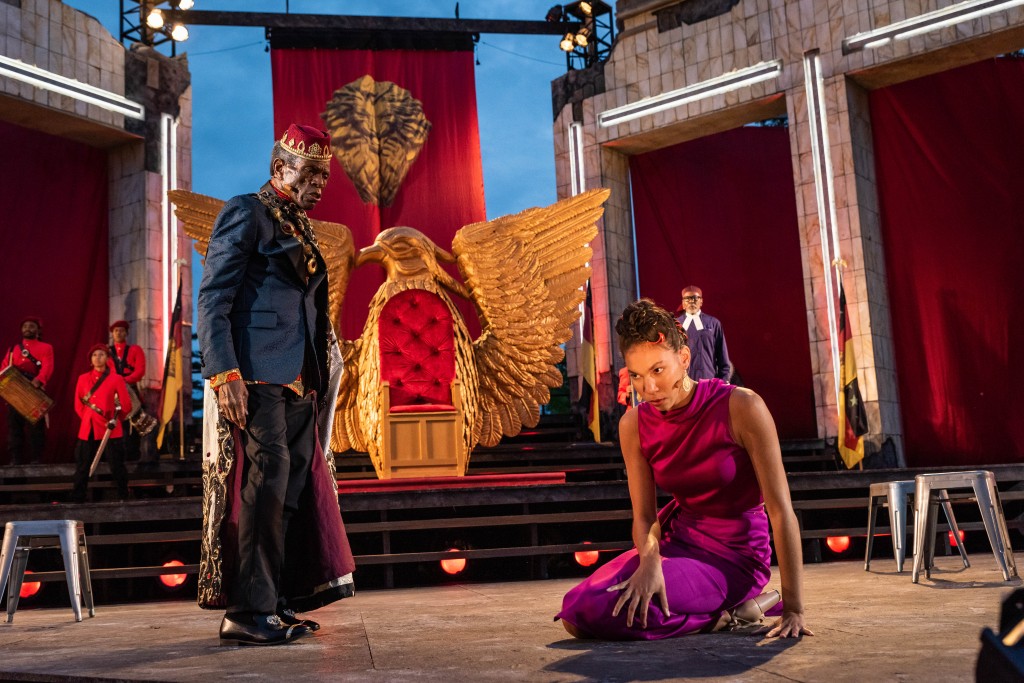 On a Friday night in mid-March 2020, my husband and I were having what would turn out to be our last dinner in a restaurant for the rest of the year, watching as our last social plans of 2020 fell apart with an email from Kansas City Repertory Theatre announcing they were cancelling the opening of their New Works Festival.

That email was bittersweet. At the time, it was rapidly becoming clear we all needed to up our caution levels, but it was also devastating to think of the economic impact closures would have on these institutions. I love theatre more than most things in life but the idea of sitting shoulder to shoulder in a room full of strangers felt incredibly unwise. And honestly, it still does.

That’s why, while a theatre trip was my last activity to fall apart in 2020, it’s also been one of the last to return in 2021. So when the St. Louis Shakespeare Festival announced that they were returning this summer with live performances of King Lear—one of my all-time favorite plays and starring the legendary André De Shields (Hadestown) in the titular role—it felt like the perfect opportunity. Not only would I get to return to theatre in the safest way possible, since the festival is not just outdoors but has instituted a socially distanced pod set-up this year, but I’d get to do it in a big way, with a full-blown road trip. 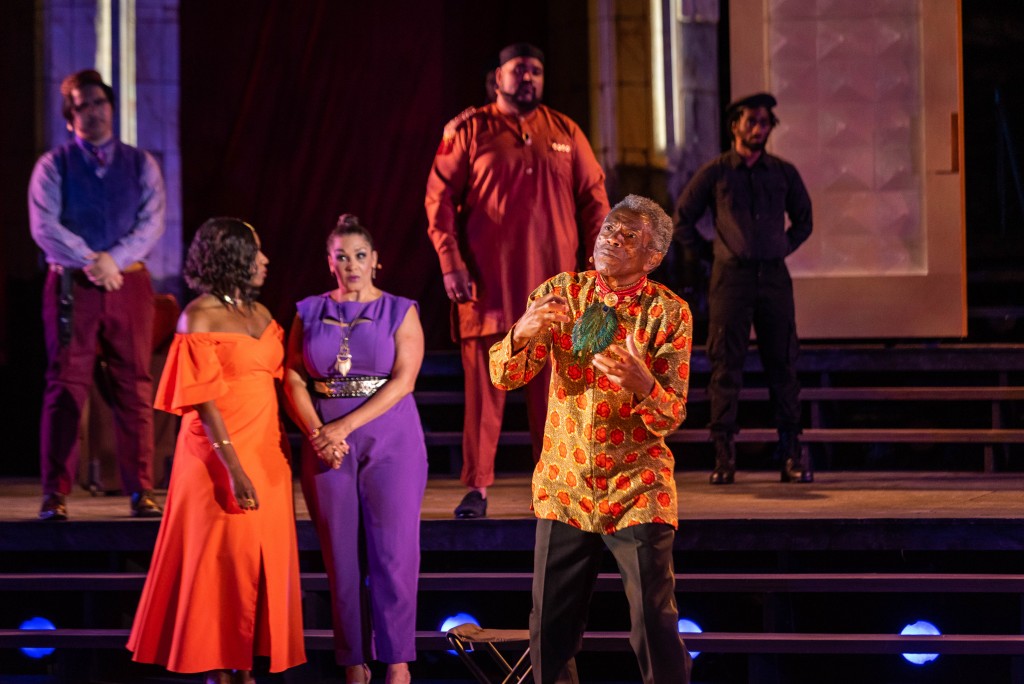 For the first time in over a year, I got to grab my husband (known to most as the editor of this magazine), our famously anxious dog, and hit the road. The way that I built up this one-night trip in my mind in the weeks leading up to it was admittedly excessive. But the experience of getting out of town for something fun and frivolous, even just for a night, was as sublime as I’d remembered.

St. Louis has an incredible draw this summer with De Shields. When we arrived at Forest Park (two minutes before curtain–a theatre-going habit that apparently didn’t just fix itself over the last year and a half), Missouri Congresswoman Cori Bush and St. Louis Mayor Tishaura Jones were on stage declaring June 2nd “Andre De Shields Day/King Lear Day” in the city.

The hype was not overblown. De Shields is electric and his performance alone is well worth a trip across the state. And he isn’t the only one.

Modernizing a Shakespearean play is always a tricky gambit. Too often, the updated setting feels like wrong seasoning sprinkled too liberally and too late over a meal. But Cofield’s ideas are incorporated deeply and they poignantly highlight all the core themes of the play without ever feeling tacked-on.

There is a quote in the production’s program from Cofield that reads: “When Francis Scott Key wrote the national anthem, it resonated one way. When Jimi Hendrix put his flavor on it, it resonated in a thousand other ways.” This play is Cofield’s Hendrix moment. His modernization feels entirely relevant to modern audiences without ever sacrificing any of the brilliance of the original. 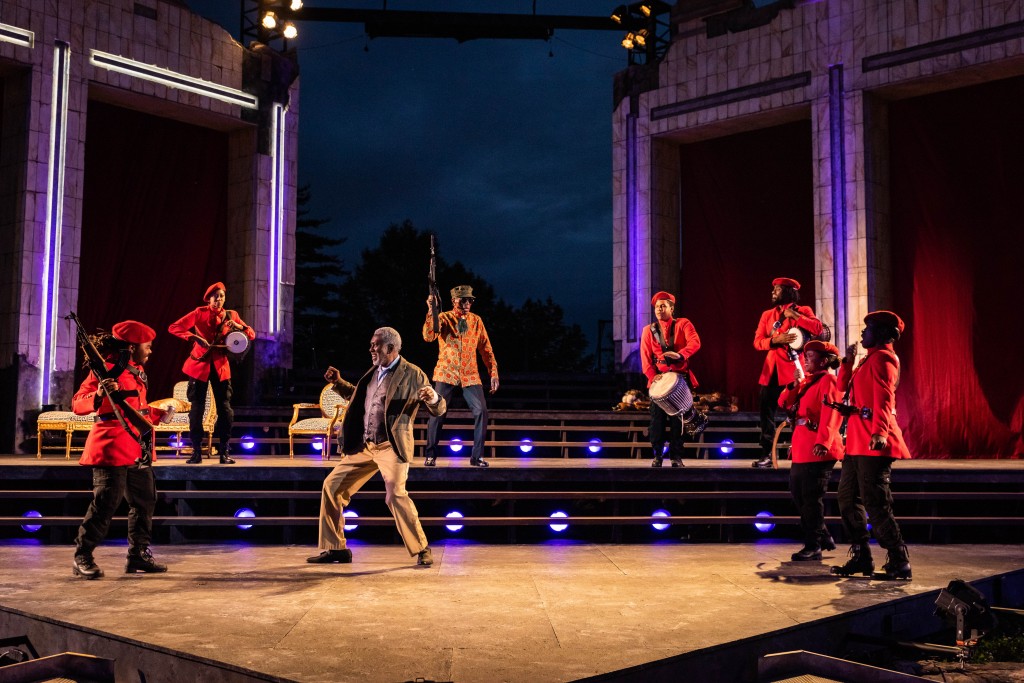 Set designer Wilson Chin keenly encapsulates the tragedy of this family’s downfall and the impact their narcissistic selfishness has on their entire nation in his sets, which begin with a giant golden eagle hovering above a regal throne, the walls behind it already showing signs of collapse and steadily deteriorating as the story progresses. Mika Eubanks’ costumes and David R. Molina’s spot-on score and sound design—an electronic music soundtrack with live drumming woven throughout—round out a wholly immersive experience.

The production does hit at least one sour note. This play deals heavily in ideas of madness and sanity and the depictions of that madness sometimes leave something to be desired. Granted, this script is 400 years old but a modern adaptation needs to take more care with this subject than, for example, reducing a character’s presentation of madness to a speech impediment–which is what we got from Edgar, Gloucester’s “legitimate” good son, who spends much of the play pretending to be “Poor Tom,” a mad beggar. It was hard to tell if this was meant to be played for laughs but that is, unfortunately, what it received from not a small part of the audience. The talented actors, the audience, and the subject matter itself all deserve better than an ableist caricature.

King Lear runs Tuesdays through Sundays through June 27 and seating is limited, although the pod system allows for an extremely comfortable spaced-out experience. Reservations are required (keep in mind there are no walk-ups) and are available each Monday for that week’s performances. If you’re looking for an excuse to get out of town for a weekend, I can’t think of a better one. 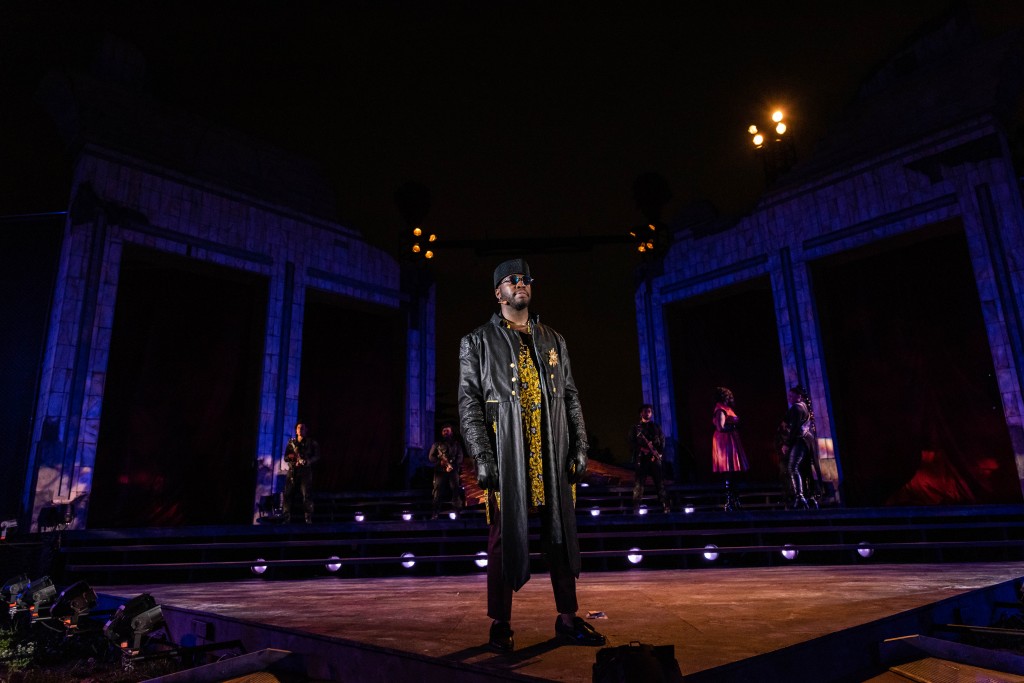