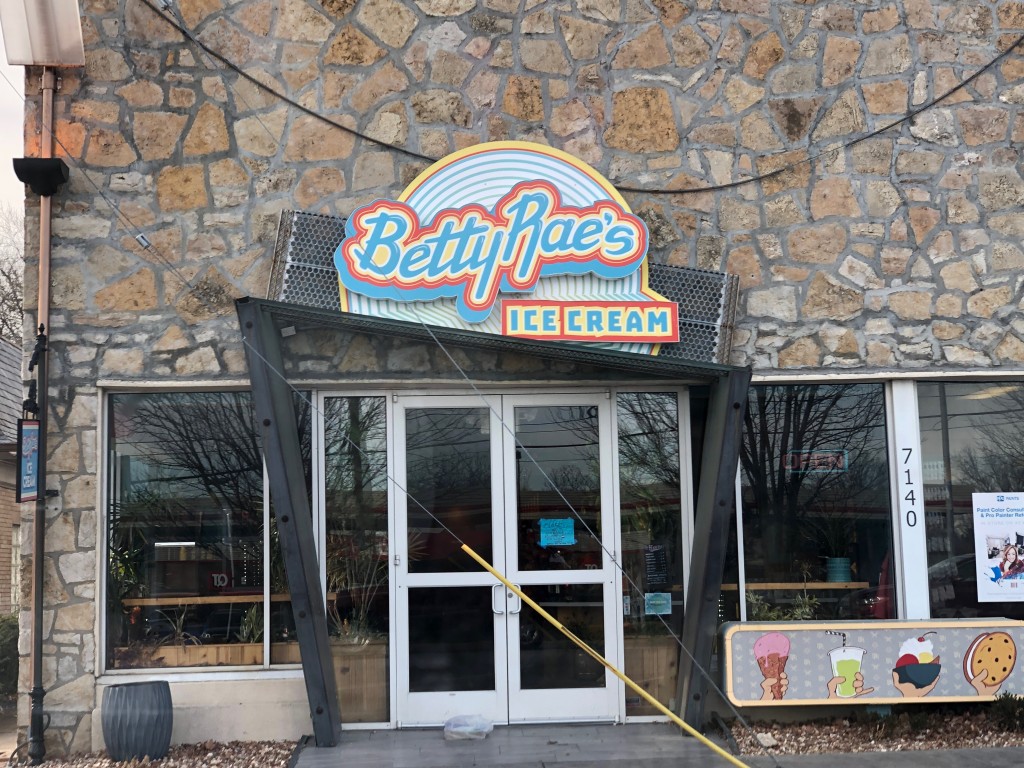 David Friesen, the owner of Kansas City staple Betty Rae’s Ice Cream, faces allegations regarding his actions and behavior in business practices and personal life. Court documents show he was arrested in early November on assault charges, stemming from an allegedly attack on his wife, Mary Thao Nguyen, who has helped run the business since October 2019.

A public-facing and collectively sourced Google Doc called “Boycott Betty Rae’s” is also making its rounds this week—put together by a former employee who worked at Betty Rae’s since the shop opened, and drawing on experiences from other former employees. While we have confirmed the individual’s identity and employment period, they wish to remain anonymous for fear of retribution.

The document’s author left Betty Rae’s, having become unable to work in the “punishing and toxic” environment created by Friesen. The doc draws on their own insights and experiences as well as that of other employees from their time working at the store.

While the individual claims expressed in the rather lengthy explainer cannot be fully vetted by us at this time, the claims that can be confirmed suggest a difficult to excuse pattern of mistreatment and mismanagement. As the spectacle of this multi-week event has spread to almost all corners of KC social media, we have deemed it an important issue to bring to light on our platform, in the name of public good (and quite frankly, safety). We’ve also been contacted by enough members of the staff and the community that this story has become impossible to ignore.

Employees of Betty Rae’s have not posed challenge or criticism to any instances listed here, and Friesen’s response [added to the bottom of the piece] mostly echoes previous public statements.

A digest of the information shared with The Pitch and the city-at-large is as follows.

The document accuses Friesen of being sexually inappropriate with young women he employed, leaving graphic images of himself exposing his genitals on the store iPad, taking money from customers for online orders they didn’t receive (Friesen is promising refunds within 30 days), failing to pay ex-employees their last paycheck, being emotionally and verbally abusive of his employees, and lying about the situation happening at Betty Rae’s on social media.

Among the many claims in the boycott document, Mary Thao Nguyen accuses Frisen of domestic assault after disposing of “his drugs.” The author of the document created the file as an attempt to let Nguyen‘s voice in the matter be heard, without opening her up to legal complications.

Documentation of Friesen’s arrest on assault charges can be found on KCMO’s Municipal Court Ticket information website. Friesen is scheduled to appear in court on Jan. 6 at 9 a.m. 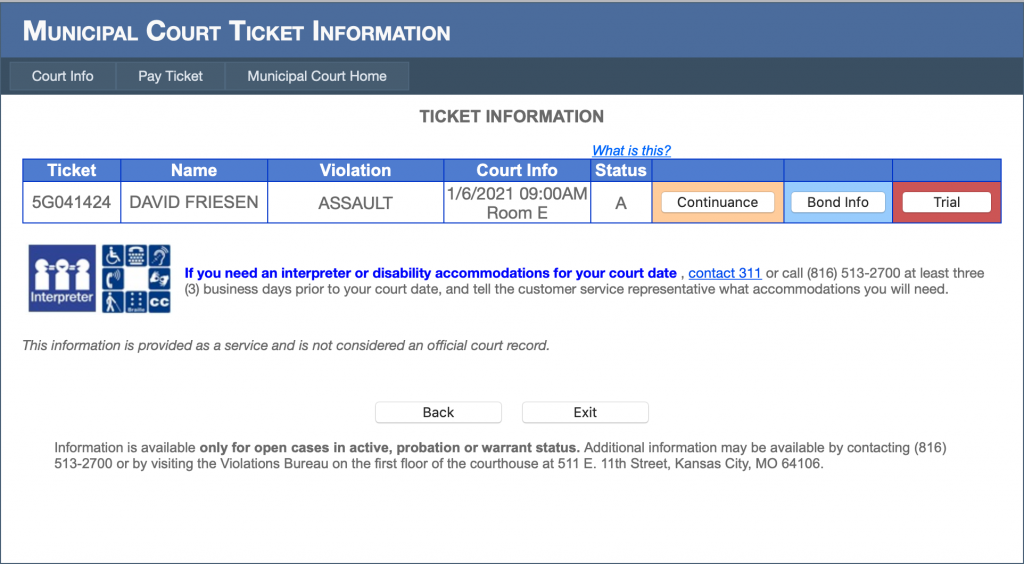 The anonymous ex-employee worked under Nguyen, and Friesen before that. They saw large differences in the environment of the shop between the two. There was constant criticism and forceful reminders of subordinate status working under Friesen. This treatment took a toll on the staff’s mental health. The document includes a text from Friesen to Nguyen, demonstrating the alleged criticism and blame Friesen would place on others.

While this sort of thing is not uncommon in the service industry, it does lay a foundation of the form that communication and leadership were handled previous to the recent spiraling. 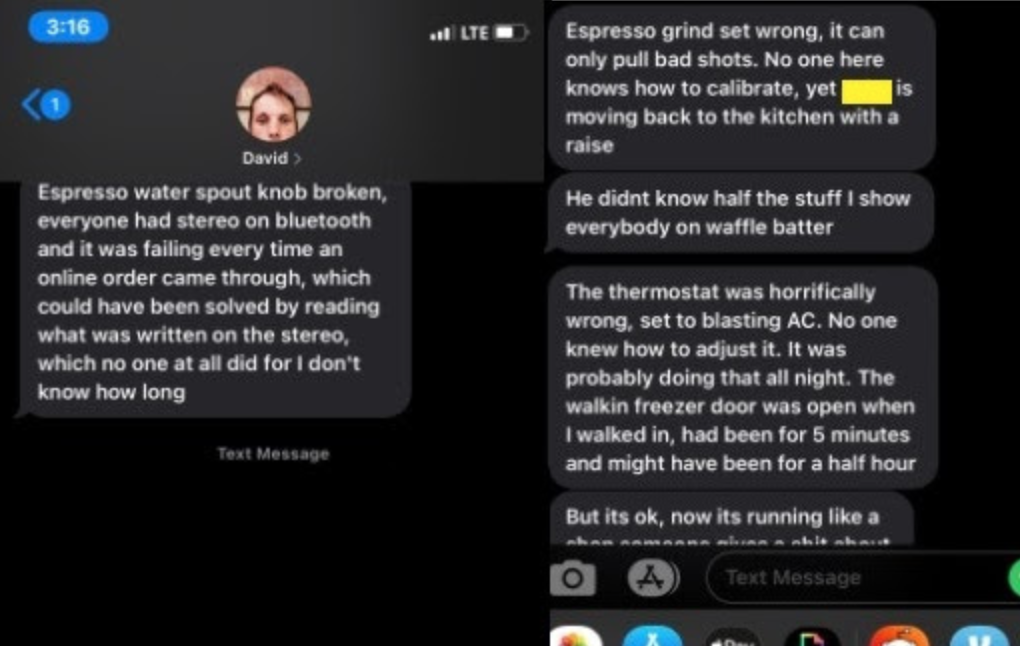 There was a noticeable change when Nguyen stepped in. “She led by example so that I and others learned how to be better managers and employees from her and with her. She trusted us and we felt it. She is the reason the shops were able to survive a city shutdown and multiple closures due to COVID exposures,” says the author. “She adapted the business and set it and its employees up for future success. She made sure we felt safe during a pandemic. And we did. She made us feel seen, heard, and represented.”

When the anonymous employee, who was still working at Betty Rae’s at the time, was contacted by Nguyen and informed of the altercation that took place between the couple at home, things quickly changed. After Friesen declared their marriage over, Nguyen began the process of leaving the business.

Friesen presented his side of the story of what happened between him and Nguyen that led to his arrest in a handwritten account shared with the staff. He also shared details of the situation through the shop’s communication portal. 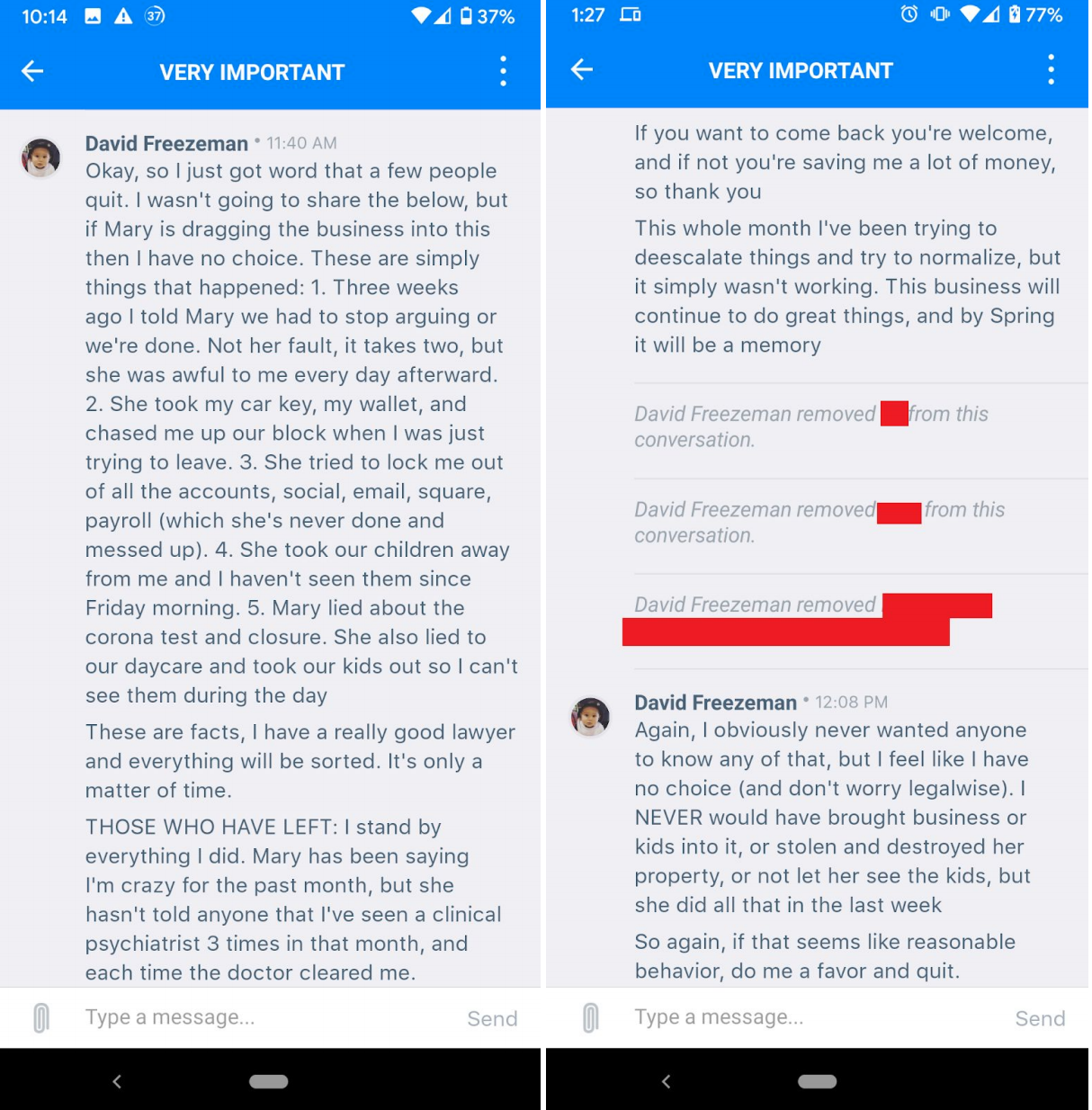 Many employees quit after Friesen shared the messages, including the individual behind the doc and the kitchen manager—both claiming Friesen’s behavior had become unavoidably unstable.

In the days following, it was revealed Friesen had also made inappropriate comments to young women who had been employed by him since they were minors. The document shares screenshots from a group chat, that seems to include a “secret tattoo,” comments on an employee’s skirt length, and an inappropriate meme.

In the week before the altercation, Friesen downloaded multiple dating and sex apps. The iPads that run Betty Rae’s POS System are connected to his iCloud. This connects the store’s POS devices to his phone, with every app and photo on his phone also appearing on the iPads. Though Friesen was aware of this, he has had to be reminded of it on multiple occasions. The recent message exchange is below: 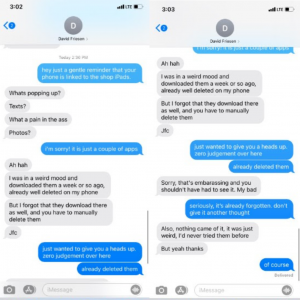 Further explicit content appeared on the iPads after Friesen returned to the store after the altercation. Employees discovered pictures of his genitals and exchanges of him paying for sex at a hotel.

Over the course of three days, the staff went from 40 to 5 employees. Friesen took to social media and said the store had closed due to “equipment failure and restaffing.”

A former employee felt they needed to share what was happening at the business. They wanted to show their support of domestic violence victims, and warn new hires of Friesen’s treatment of employees.

After this, Friesen began making insensitive remarks regarding domestic abuse in the comments section on social media. He also warned commenters of his lawyers following the social media exchanges. Screenshots of these exchanges that have since been deleted can be found in the doc.

According to the document, the shop temporarily closed when Friesen’s father had him admitted to Truman Hospital for an emergency psych evaluation. His admission was submitted with affidavits from his dad, wife, employees, and other friends and family. He was hospitalized for six days.

Though Friesen had full access to the business’ POS, he hadn’t monitored any sales or orders since Nguyen left on November 11. Customers came forward in stating dissatisfaction in failing to receive their orders and receiving refunds for what they never received over the week of Thanksgiving. 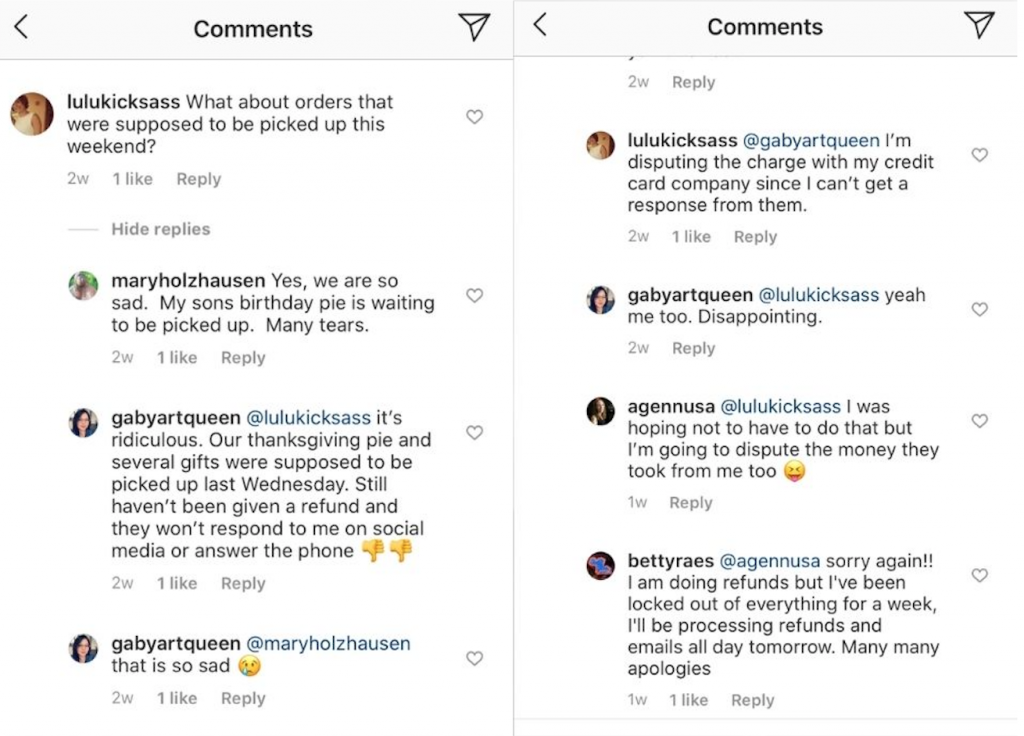 As of Dec. 4, multiple former employees had yet to receive their final paycheck, including the anonymous employee.

On Dec. 6, Friesen posted on Instagram denying the allegations, accusing his wife of locking him out of the business and taking his children. He continued by asking people to respect his and his wife’s privacy. He also documented a break-in that occurred over the weekend at the River Market location.

The anonymous former employee behind “Boycott Betty Rae’s” is unsure how the business will move forward. They are aware that a new crop of employees have been hired, including many young women, and they hope this group document will serve as a warning.

There is also a Facebook page, Boycott Betty Rae’s, that is allowing the document to be shared on social media. All content on both the Waldo and Rivermarket shop location’s Facebook pages have been deleted.

A statement from David Friesen to The Pitch is republished in its entirety below:

My name is David Friesen, founder and sole owner, since 2015, of Betty Rae’s Ice Cream. In November, I was diagnosed with Bipolar Disorder and an accompanying mania, which my family say was effecting my behavior. I agree with the diagnosis and their interpretation, but I do not accept their allegations as to the extent of the mania.

Words I have said have been twisted and taken out of context, actions that are absolutely innocent were qualified as dangerous, and my children and business were stripped from me I would say illegally, or at the least in a disrespectful, undignified and injurious manner. I have made one mistake, which was blown far out of proportion and made public, which has easily been the worst shame of my life.

I was forcibly taken to two hospitals for a total of 13 days, during which my business and name were dragged through the mud by parties who have no idea what occurred inside a house and marriage they were ignorant of. While I’m detained they have broken into and trashed my home, and broken into and trashed the River Market shop. There are police reports and arrests in both events, this is not idle speculation.

While inside for the first week, I had no access to electronics, while for the second stay I had 2 hours of phone a day. I had to do all my business in those hours, including processing returns for all thanksgiving items, which I’m still working on; rehiring all staff; keeping up with a busy correspondence; changing locks and fixing doors; and more. All while seeing the most untrue and vile stuff on social media about myself.

For the record, I have NEVER crossed an inappropriate line with a coworker or employee, and with the exception of my mistake (an inappropriate photo that leaked), I stand by ALL of my actions over the past year, and my actions with regards to respecting employees’ time, money and happiness. I’m fighting all of this legally, much slower than slander.

I intend to reopen Betty’s as soon as possible and as safely as possible. We WILL NOT miss Christmas, we’ve been giving away ice cream all day for 5 years now and I respect traditions. I remain fighting to clear my name, but I know it can be useless in the tide of public opinion. I’ve taken steps to sell the business that I thought I would keep for life, because I’d rather it survive without me than struggle with me.

The only thing I ask is that you respect me and my family’s privacy during easily the worst time of our life. Thank you for the support, and sorry for disappointing everyone.